This is one of my favorite subjects.  Repurposing an older computer and using it when there is no available internet connection.  If you have internet that is a big plus and you can and should use it but computers are still pretty useful with no network with the addition of a couple of pieces of inexpensive hardware.

What can a computer do that isn’t hooked to the internet? Quite a lot actually. Here’s a few things you can do:

Not a bad list, huh? So the big hurricane hits and all the power and utilities are out it almost seems like a must to have all this. Here’s what you need to get started.

As far as Linux software goes you’ll need something called GQRX and Me-TV. If you are using Windows you can get a free program called SDR# (SDR Sharp) for the SDR Radio.

Here’s a screenshot of Me-TV and of course the picture will go full screen if you want it to. You even get a free electronic program guide (EPG).  Everything Over The Air (OTA) TV is broadcast in  HD digital so the picture quality is excellent (provided the signal is good). 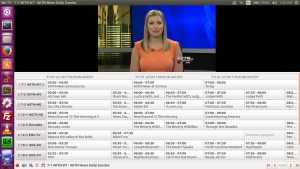 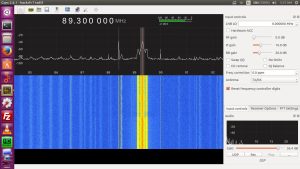 The SDR Radio I linked to above will do HF, which encompasses Amateur and Shortwave and AM radio as well. It’s just a little geeky to get going but this device will do all the necessary bands. There are other, cheaper RTL-SDR USB radios but they don’t natively do HF, AM, Amateur, and Shortwave without an UpConverter which will make you another $40 or so lighter in the wallet area. And before you ask, yes I have an UpConverter too.

Downloading NOAA transmissions is a bit geekier and can be done easily in GQRX. I have on overview on my page here for doing it. Basically you need GQRX, sox, and WXtoIMG. A program called GPredict is also a necessity for tracking where the satellites are. All these programs are free. Here is GPredict configured with my favorite satellites. We can see that NOAA 19 is right over the top of me. 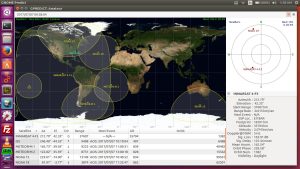 Also there is a project called “Outernet” which is a satellite data feed.  The project is in a bit of a state of flux now and they moved to a new satellite which means you need new hardware to access it.  Unfortunately they aren’t selling it yet as of the date of this blog post.  It has Wiki pages, current events news, weather from GOES satellites and some other useful information.   Hey if you are in a SHTF situation with no power and no internet, yanking current world news off the satellite is a good thing.

But the ability to predict the weather is PRICELESS if you are in a no power, no communications situation. I am really not kidding. You can get this quality of satellite imagery (below) from a $25 SDR Radio. Wouldn’t it be nice to keep a close eye on that hurricane approaching?

NOTE:  That image is from NOAA 18 and captured with a handheld antenna. 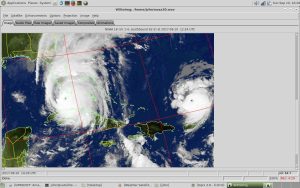 5 thoughts on “Using A Laptop Without Internet”