WHEN BUYING A GPS MODULE FOR THE SDS200 KNOW THAT GPS CHIPS ARE WILDLY COUNTERFEITED AND THAT BUYING A CHIP FROM AMAZON, EBAY, OR ALIEXPRESS IS LIKELY TO GET YOU A FAKE OR A REBRANDED CHIP.

I’ve been on a Uniden Police Scanner GPS DIY tear lately and my last radio scanner to need a GPS accessory is my prized Uniden SDS200.  Sure you can buy a GPS unit for about $50, but our goal is to make one for less than that.

Oddly enough, this was the easiest one to make.   Here’s what you need:

Oddly enough I bought a NEO-6M board from one seller on eBay for $8 and it is authentic which really surprised me.  The NEO-6M is a pretty old chip though so I guess I’m not surprised old authentic stock is still out there.  An $8 NEO-6M is HIGHLY RECOMMENDED for this project……..if you can find one.

Lots of different GPS units will work but they must not be serial devices.  Make sure you get a 3.3 Volt, TTL logic unit and not an RS-232 serial device.

Let’s wire it up!
END_OF_DOCUMENT_TOKEN_TO_BE_REPLACED

I have two scanners, a Uniden Home Patrol 2, and a Uniden BCD436HP.  They have the following in common:

BUT, THE GPS 4 PIN CONNECTORS TO THE SCANNERS CAN BE WIRED DIFFERENTLY.

To make your own GPS cable you need:

END_OF_DOCUMENT_TOKEN_TO_BE_REPLACED

I bought a new Uniden BCD436HP scanner and decided to install the programming software Sentinel.  I have a couple of computers and decided to do this clean.   And that’s when I realized that using Sentinel for the 1st time is really kind of a beast.  There are a LOT of settings that you probably should run through prior to writing your configuration to your scanner.

The BCD436HP and all of its big brothers are touted as being EASY to program..  By golly you can just plug your zip code into it and it will just start scanning.   While that is true almost constantly on the scanner forums you will see someone do just that and then post:

NO MATTER WHAT, NO MATTER HOW EASY IT WAS YOU WERE TOLD……….THERE IS SOME LEVEL OF PROGRAMMING WORK NEEDS TO BE DONE.  DOING THAT IN SENTINEL IS FAR EASIER THAN DIGGING THROUGH THE MENUS ON THE SCANNER ITSELF.

END_OF_DOCUMENT_TOKEN_TO_BE_REPLACED

Always wanted one of these Uniden BCD436HP scanners but the cost was always prohibitive.  For some reason Amazon is running them at around 30% off currently.

The BCD436HP is circa 2014 which makes it OLD in electronics years, and back then digital trunking scanners weren’t really designed to combat Simulcast distortion.  That is where a digital system has multiple antenna towers that broadcast the exact same signal at the exact same time.   Some scanners getting hit with multiple signals will distort, have choppy voice, or robot voice.

The only two scanners on the entirety of planet earth designed from the ground up to deal with Simulcast are the Uniden SDS100 and the Uniden SDS200.

So it doesn’t make a lot of sense to spend big money on a scanner that might choke when just a bit more money gets you a sure thing.  Where I live there is a P25 Phase 1 LSM system that will bring most scanners to their Simulcast knees.  Within moments of slapping some batteries in a scanner I will know if it can deal with Simulcast or not.  Remember when you could actually go to a local store and test a radio before you bought it?  Sadly those days are no more.

Anyway, I didn’t even want to take a chance on an old scanner that was expensive and might not work.  That is, until the price dropped dramatically.  After turning it on for the first time within seconds I received a call on my local Simulcast system and the BCD436HP dealt with it PERFECTLY.  This scanner is a keeper.

NOTE:  Simulcast is odd as hell.  Just because it works in my location doesn’t mean it will work across town, on the system in the next town over, or at your location, wherever that is.

I have many scanners.  Too many.  After dabbling with all of them the last couple weeks I have come to the conclusion of which one a scanner enthusiast should purchase.

That’s it.  But with some exceptions which I’ll get to in a minute.   You’d think in this day and age there would be dozens and dozens of choices and price wars in the radio scanner market.  There isn’t.   In fact there really are maybe only 15 or 20 choices AT ALL.

I count 8 Uniden digital scanners and 4 Whistler digital scanners.  You can get Unication digital pagers which will track P25 digital systems and there are a couple other offerings (old) from GRE and Radio Shack.   I’m sticking with my estimate of 15 to 20 choices.

Most digital systems out there have multiple towers that transmit the same data at the same time for maximum coverage over the First Responders area of operations.  That is called Simulcast.  It can also produce distortion ESPECIALLY if a couple towers are a few milliseconds out of whack.

Currently there are only TWO scanners that have circuitry designed to deal with Simulcast.

Hence my recommendation above.  Here are the exceptions.
END_OF_DOCUMENT_TOKEN_TO_BE_REPLACED

I recently picked up a Uniden BCD325P2 and am currently putting it through its paces.  The scanner is circa 2015 so it isn’t a new offering and I got mine used which is probably the cheapest way to buy one of these.

I don’t regurgitate specs here.  I can’t give you the specifications better than Uniden can.  What I can do is to use something from the common man standpoint and tell you what I think of it.

There is a lot to like about this scanner and first and foremost my favorite feature may be that it uses AA batteries.  Scanners with rechargeable brick batteries are cool but when they drop dead they must immediately be tethered to a power source.  You can also use AA rechargeable batteries in this scanner so you kind of have the best of both worlds.

Also the scanner is really lightweight compared to my Uniden SDS100 or Whistler TRX-1.  Much more suited to the backpack or belt clip or just carrying it around in your hand.

On the “I Don’t Like” side of the equation, it just doesn’t do well with my local Simulcast system, New Bern Public Safety which is a P25 Phase 1 LSM system.   I’m not done playing with P25 threshold settings or using a lesser antenna to try to cut reception from one of the two towers near me.

Now that I have one good, and one bad……Let’s dig in a little deeper.
END_OF_DOCUMENT_TOKEN_TO_BE_REPLACED

I recently wrote a blog on selecting a Police Scanner and I wanted to do a deeper dive on how to select one and how to begin the set up process. 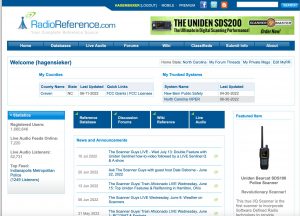 The process begins at RadioReference.com.

The first thing we are going to do is inspect our area and determine what systems we want to follow.

Then we’ll take a peek at the antennas used to transmit and determine whether or not we have something called Simulcast.

Simulcast is when multiple radio towers transmit the same thing at the same time.  This is obviously done to provide a larger coverage area to ensure our First Responders don’t hit any dead radio zones in their area of operations.  But, Simulcast can cause horrific distortion and some radio scanners simply cannot do Simulcast systems very well at all.
END_OF_DOCUMENT_TOKEN_TO_BE_REPLACED 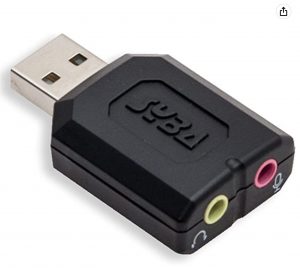 I have a Uniden SDS200 which has an ethernet jack and it is a breeze to set the scanner up as a server over my network using the excellent software, Proscan.  That includes streaming the audio across the network.

My SDS100 is a slightly different animal and it requires a a physical connection via USB so that Proscan software can see the scanner.  That won’t carry your audio though,  so it needs a separate physical connection from the Line Out (headphone jack) on the SDS100 to the controlling computer.

I don’t know about your laptop or computer but mine DOES NOT have an input jack for a microphone.  So what you have to do is add a USB sound device that has a separate microphone input.
END_OF_DOCUMENT_TOKEN_TO_BE_REPLACED

So you want a police scanner?  There are definitely some things to consider before you get one. And in this day and age the old saying goes “There’s an app for that”.  There are multiple apps you can download for your phone, and they work, but they also have some considerations.

First and foremost, that stream to your app IS SOMEONE ELSE’S SCANNER.  It’s that simple.  And that stream is reliant upon their internet, and your internet.  An app may work for you but if you clicked through on a blog about Police Scanner Selection you’re likely here because you want your own scanner.   Let’s get to the considerations.

How Much Is This Going To Cost

It depends.  Modern Digital Trunking Radio systems require expensive hardware to turn that digital signal into voice.  Radios capable of following trunked radio systems are going to cost you probably at least $250 and probably more like $500 for a decent one.  That being said, if you live in small town USA where they use Analog FM radios or you just want to listen to the local airport control tower you just need an Analog radio which are CHEAP and can be found used for hardly anything on eBay or Facebook Marketplace.

First you need to know what you are up against.  The search begins at RadioReference.com Database pages.  Select your State and then your County.

From here you select the systems you want to monitor.  All my trunked radio systems above are some kind of digital communication so I need a digital trunking radio.
END_OF_DOCUMENT_TOKEN_TO_BE_REPLACED

I have several police scanners and if you turn them all on side by side you’d be amazed that some seemingly pull in more calls than others.  Even if they are configured identically.  Everyone wants to hear EVERYTHING.

There are lots of variables but essentially here is John’s Rule Of Police Scanners:

“The more stuff you try to listen to, the more likely it is you’ll miss more stuff. “

Even in sleepy New Bern, North Carolina there is lots to listen to.  And most police scanners these days have a zip code search.  Put your zip code in and it pulls in EVERY POSSIBLE THING from the RadioReference.com databases.  As your SCANNER tries to SCAN through that massive list it will be searching elsewhere when some call comes in on a system you actually want to hear, and it will miss it.  Some scanners allow you to set Priority on systems, so all is not lost……but then it becomes a lot more complex than just putting your zip code in.

Let’s talk about some things we can do to improve listening and hear more of what you want to hear.
END_OF_DOCUMENT_TOKEN_TO_BE_REPLACED