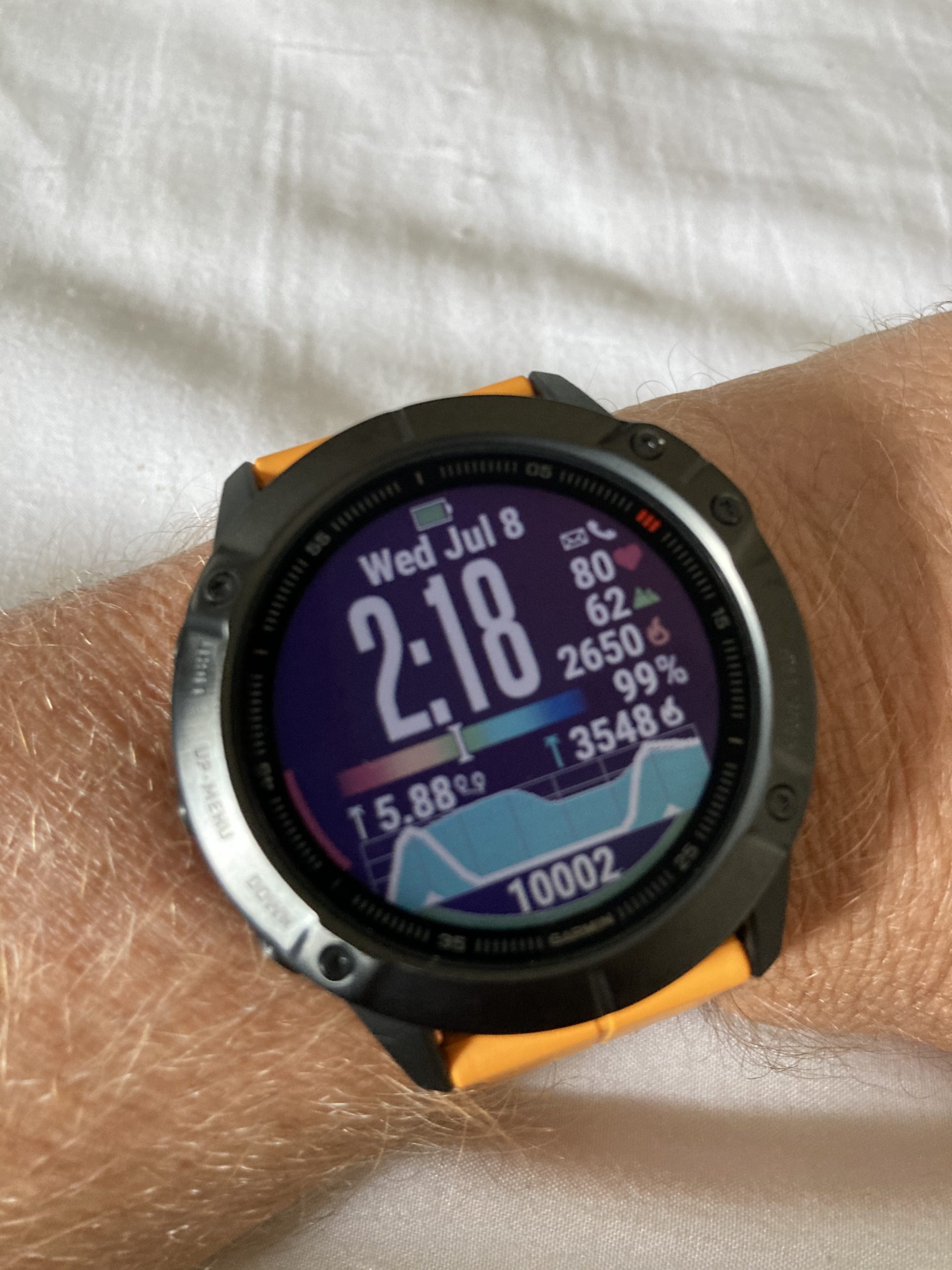 I got the Mac Daddy of Fitness Watches, the Garmin Fenix 6X Pro.  It wasn’t the top of the line Solar or Titanium version but still wildly touted as the best fitness watch on the planet.

My favorite “Fitness Watch” is my Apple Watch Series 5 for a variety of reasons not the least of which is that it has a cell phone in it.  And while it fairly easily syncs with either Strava or my favorite 3rd party fitness application, RubiTrack, my absolute favorite fitness software is Garmin Connect.

What a dilemma that is! 😀.  Of course the way around that is to have a Garmin watch and carry a cell phone with you.  Not a problem while biking but not something I’d do while jogging.

I believe firmly in doing your research before buying something, especially something this expensive.  Great sources of information are the Amazon reviews and the user forums for the devices in question.   Okay, on with the review.

I bought mine from Amazon while they were running a promotion.  I got mine for $599 and they typically are a bit more expensive than that. So at that price I expect good things.   And I’m not disappointed.  One of the first things I notice is that it is ridiculously customizable.

I’ve changed my watch face as per the screenshot below (and the photo at the top of the page). I love it. Here’s the best part, in my opinion.  The individual activities are HIGHLY customizable.  When riding my bike I WANT to see the following items:

How cool is that? And you can darned sure set it up any way that you like.  One glance and I have all that information I want.  Garmin also makes a bicycle mount for this watch (or you can 3D print one) and you can use it as a bike computer.  All you would need is a chest strap to monitor your heart rate, if that is important to you.  I ordered the Garmin HRM-Run so that I can do just that.

All great news so far.  Let’s talk about something not so great.  The Weather Widget currently is broken if you are using an IOS device.  I’m currently running Firmware Beta 10.00 and Stable Firmware 10.10 is supposed to fix that.  It has been released for 4 days and I still haven’t gotten it as they do a rollout with the firmware.   Now I could give a minimal crap about the weather widget as a whole, but, but, but, THIS IS A $600 WATCH.  Come on.  Fix it already.  If the weather widget doesn’t work, what else doesn’t work? After poking around the Garmin Fenix 6 forum it seems like this has been an on and off issue since the Fenix 6 release.   If for some reason the Weather Widget is important to you, the Fenix 6 is NOT your Huckleberry.   Also the weather widget seems to get it’s weather not from “the internet” but from the nearest airport.   I have an airport just a few miles away as the crow flies so I’m probably okay with reasonable weather accuracy.  If you live 30, 40, 50 miles from an airport your weather widget may be semi useless on a good day.

Regarding the firmware again.  I got sick of waiting for the slow rollout push of version 10.10.  Someone in the Garmin forums received the push and then uploaded the update file to the inter webs before installing it.  I was able to download it and install it to my watch. 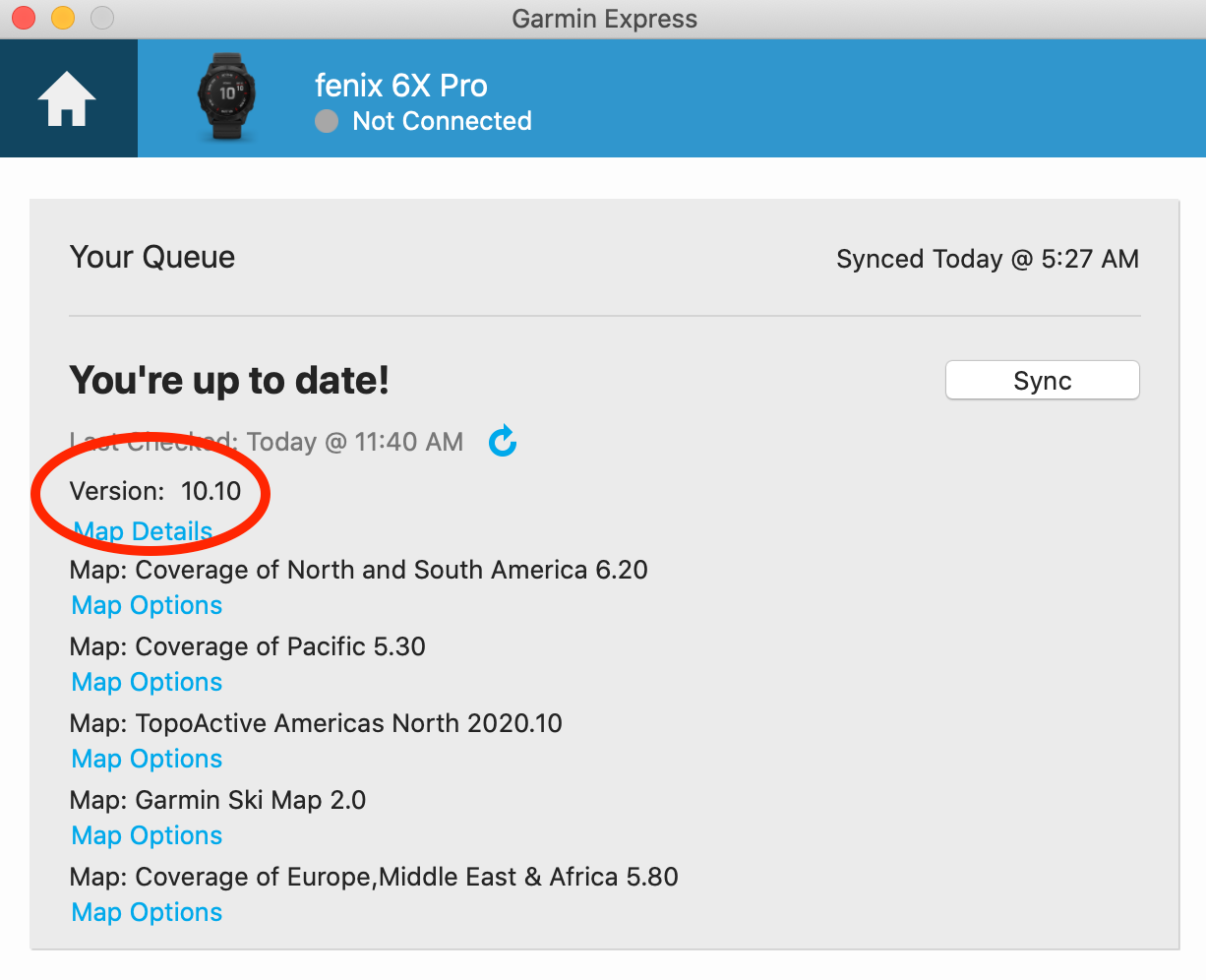 And lo and behold the misbehaving weather widget works again. 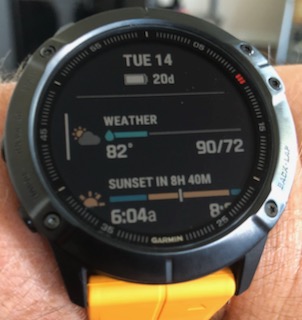 On to the next thing:

Syncing seems to happen automatically (as long as you are near your phone) as soon as you finish and save your activity.  For some reason my Vivoactive 4 doesn’t do that, or at least doesn’t do it automatically every time.  I have to sometimes connect it to bluetooth first and do a manual sync with the Garmin Connect App on my phone.

Once it syncs the Garmin Connect website is just awesome. 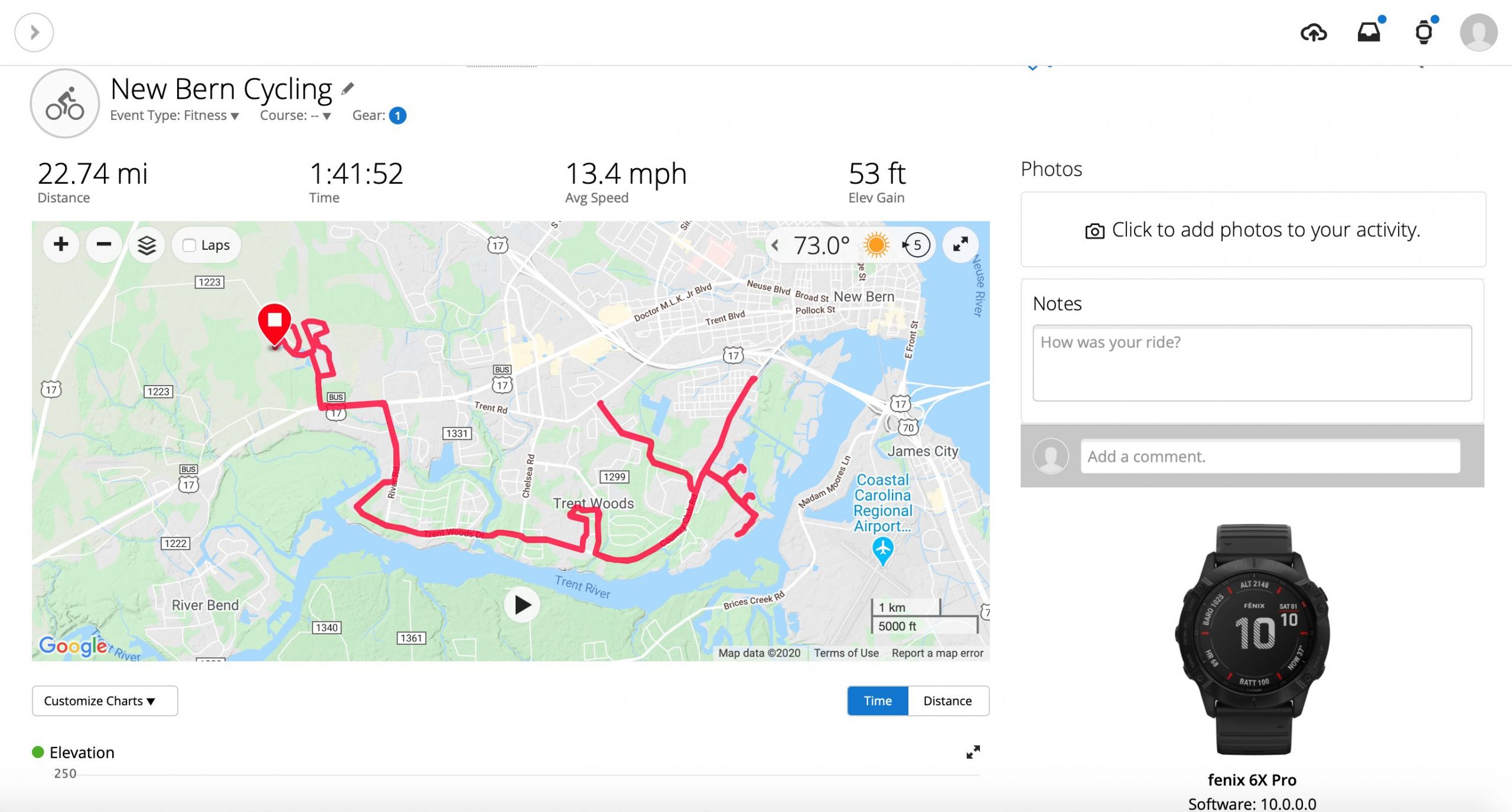 A lot of folks like Strava, and I use it too with my other devices but for my money the Garmin ecosystem is the best.  It works.  And that’s what you want.   That’s all you want.

Also with Garmin’s your Connect data can be sync’d with MyFitnessPal which is the program I use to track my diet/nutrition.  My exercise sessions just show up there automagically.  Garmin Connect also sync’s with my favorite off line fitness program, RubiTrack.

So essentially once my activity is completed and sent to Garmin Connect it lands everywhere else I want it to as well.  That’s what I mean by “the ecosystem”.  Yes you can buy really cool AF Chinese Watches that look slick and have great electronics and sensors but unless you have that software suite you can FUGGETABOUTIT.  It’s not worth your hassle.

I didn’t really need this watch but its mapping capabilities are not to be ignored.  It comes with a full TOPO map which is awesome if you are a hiker.  I’m also a compass geek and while watches and GPS’s are bad assed, they are electronic equipment that can break or suffer from dead batteries.  You should never, and I repeat never, go out in the wilderness with one GPS device with no real clue where you are and count on that one device with your life.  A compass won’t die on you and many have tritium glow in the dark indicators for even the darkest night.

Please, just know what you are doing before you head out into the forest for a trail run with ONE DEVICE.  Plan accordingly.  Anyway the maps are useful and can be used for routes and returning to the place you started. Can’t say enough about this feature.  My house is in a new subdivision that hasn’t gotten mapped out yet, at least not on Garmin maps but there is enough info here to see that the mapping is quite useful.

Especially helpful is the ability to compensate for magnetic north vs. true north.  Where I live true north is off about almost 11 degrees from magnetic north.  You can compensate by following these directions.  This would be awesome when using paper topo maps.

You can set the directional reference used in calculating heading information.

Here’s something kind of fun.  They added a Starbucks app.  I’m not much of a StarBucks guy but my daughter likes it and sometimes you are just somewhere where there is a Starbucks and you need a cup of coffee.  I always have $10 or $20 on my Starbucks card on IOS so just typing the number into the Garmin app and it was a cinch to get it working.   Might give it a try later! 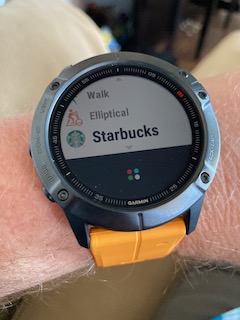 I’ll add more as I learn more intricacies of the watch.  Right now I’m super happy, especially since the latest firmware upgrade was installed.  And with the addition of more apps it rivals the Apple Watch some.

With the ability to add a credit card (actually my Navy Federal Card would not add as they don’t support Garmin, but my Bank of America card did) it allows you to run in the store and grab a drink or swing in the Starbucks and get some life giving coffee.

I still want an LTE version though.  Then my Apple Watch could go on eBay.  That cell phone in the Apple Watch is tough to beat.  Fenix 6X Pro is oh so close, though.

Here’s what the bike mount kit looks like in the pic below.  I got a Garmin HRM-Run Heart Rate Monitor so I can bring down my heart rate data as well.  This Fenix 6 is better than my Edge 705 which is old school, however it still shows all the same data. 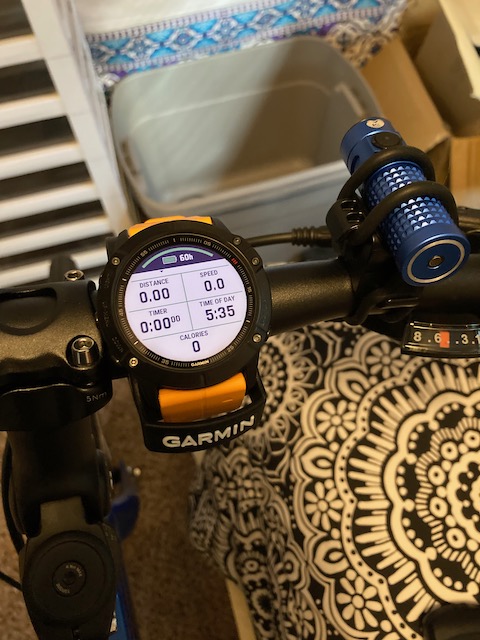 Here’s a new observation with my first ride with the Fenix on the bicycle mount, and I should say your mileage may vary because I have 57 year old eyes.  My eyesight is perfect but I need cheaters to read.  Reading small print isn’t working like it used to.   I start my bike rides around twilight.  Just light enough to where I hopefully don’t get run over.  From about 5:30 to 6 or so I couldn’t see anything on the Fenix unless I turned the light on, then I could just make it out.

Soon as the sun got up good I could read the Fenix PERFECTLY, but dawn to sunup was a bit of a struggle to see clearly.   All this being said I was wearing a watch which I could hold right in front of my face and get the same details.  Also I ride the same route mostly (22 miles) and I don’t necessarily need to see ANYTHING.  I do like seeing my heart rate and in fact I could see the heart rate as it is a larger field the way I have my watch set up.  Conclusion:  ALL GOOD!  Just low light is tough for this old plugger.