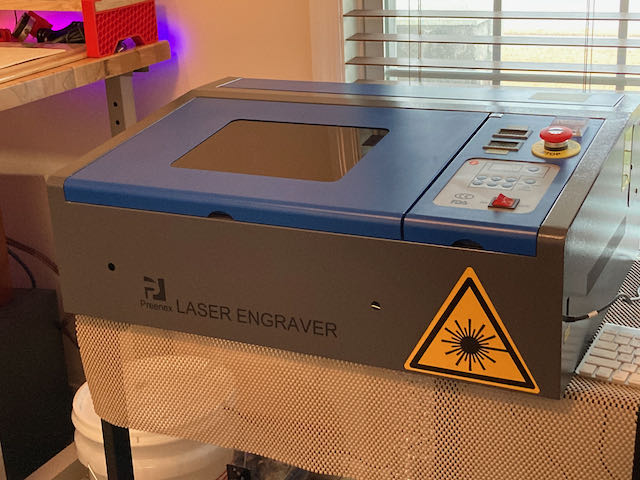 I cut my teeth in the CO2 laser world the same way most other people do……..with a Chinese eBay K40 laser.  Hobbyists love them because they cost next to nothing (about $350 and up) and they are pretty powerful devices.

That being said they are Chinese, are cheaply built, with not the highest quality parts.

Much of the allure here is in the hacker installing upgrades and building it into a much more capable machine.   At the end of the day though the machine has some serious limitations.  Here are some that got my attention:

Don’t get me wrong though.  Limitations don’t mean you shouldn’t get one, own one, hack one, tear it apart and learn about how lasers work.  But at some point you are going to outgrow this machine, ESPECIALLY, if you intend to make money doing laser etching or cutting.

So I took the leap and bought a bigger machine.  An OMTech 50 watt laser. 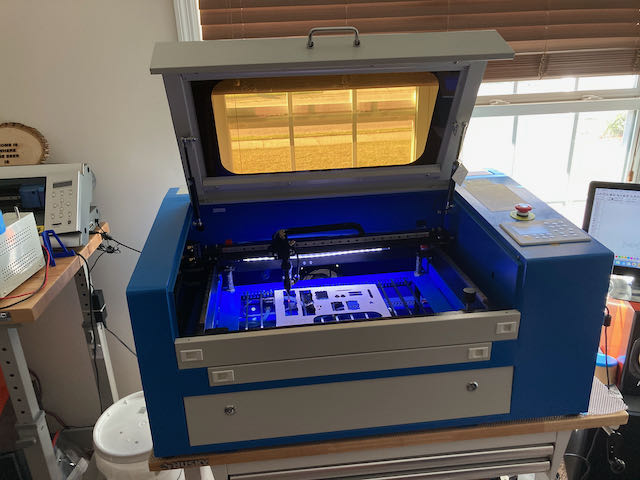 It is huge compared to the K40 and has all manner of upgrades that the K40 doesn’t.

I can’t say enough good things about OMTech.  Buying a Chinese laser on eBay is a crapshoot at best.  The internet is rife with horror stories about receiving busted up lasers, incomplete lasers, mis-wired lasers……..you name it.  Suffice to say that China is full of dealers and resellers that are less than honest or reputable or that know how to build a shipping box.

OMTech, located in Southern California imports the lasers and runs them through a QA process and also adds upgrades to them before repackaging and shipping them out.  I bought my K40 and this 50 watt laser from them.  Both worked right out of the box and both were in perfect alignment.  Getting a laser from China to arrive with the mirroring system perfectly aligned is a trick that OMTech seems to have perfected.  At least in my case.

Laser tubes are water cooled.  Oddly enough the way more expensive 50 watt laser does NOT have a temperature indicator for the temp of the laser tube.  The cheap K40 does.    The reasoning behind this as that you should probably use an industrial water chiller.  Basically it is a refrigeration unit.

A lot of people use the cheap aquarium pump that comes with the machines and then freeze water bottles or ice packs and dump them in the water.  Nothing wrong with that.  It works, it is cheap and easy…………until summer hits.

A lot of times I’ll get some inspiration and just go and do a job on the laser.  If it is warm outside and the sun is hitting the back of my laser which is parked in front of a window the water gets quite warm.  it will take me 4 water bottles to cool the water and also it takes 10-20 minutes to get things the proper temp.  Also when it is the proper temp there is a pretty fair chance that the ice bottles are thawed and you need to go get a few more. 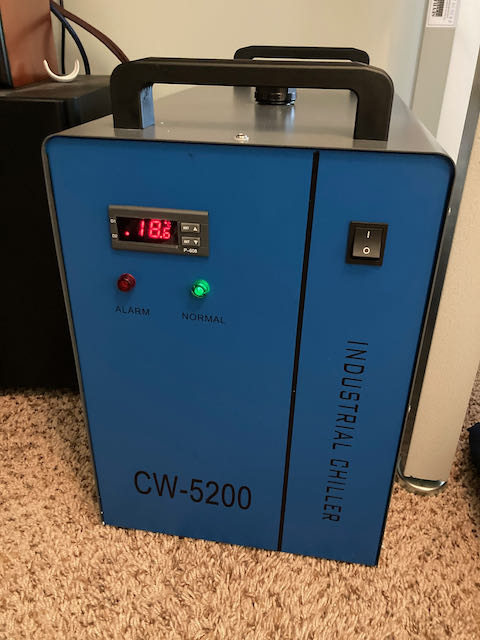 A quick search on eBay and you can find these things in a pretty broad price range, some being downright cheap.  Because I have had such good luck with OMTech I went ahead and bought one from their eBay store.  They are about $100 more expensive than other sources and I may have just thrown $100 down the toilet but the fact is THAT I NOW TRUST OMTECH.  I personally think it is money well spent.  It came well packaged.

Also came with a good manual and a user on one of the OMTech Facebook groups (Brandon Rawlinson) made a cool cheat sheet for setting it up.  Thanks!  I’d link it but you have to be a member of the group to get to the link. 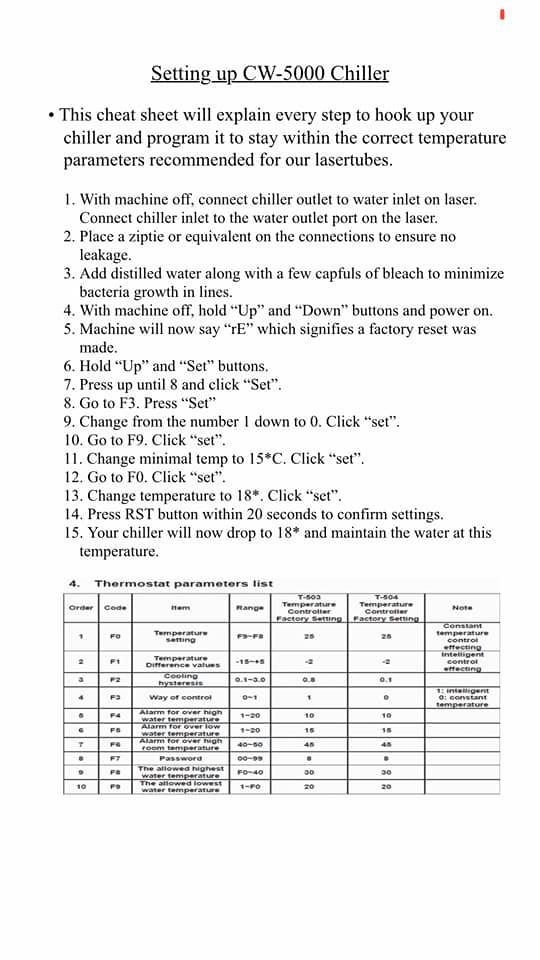 CW5200 Cheat Sheet made by Brandon Rawlinson (with permission)

All in all I love this thing.  I have only had one problem with it that is unrelated to the hardware.  Lightburn software pushed an upgrade that failed with Ruida controllers .  Took me a few minutes to realize that the “upgrade” was what broke communication from the computer to the laser.   I had some files already on the controller and when I ran one and the laser sprang to life I knew it was software related.  Especially since I had just upgraded Lightburn.  I rolled back to the previous version and all is well in John’s Hobby Room again.

Cutting is WAY cleaner on this machine compared to the K40.

Where edges are black on the K40 cuts, they are a soft color brown on the new laser.   The pics below aren’t a perfect field test or head to head comparison but it gives you the idea.  It is the same wood and same thickness of wood.   The 50 watt creates much less burning.  Both have air assists as well. 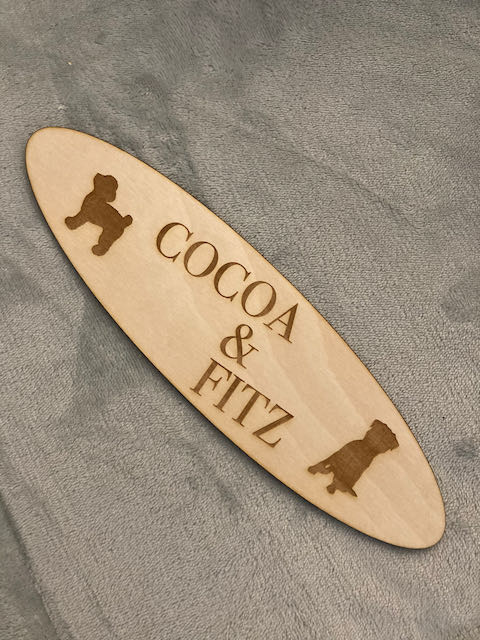 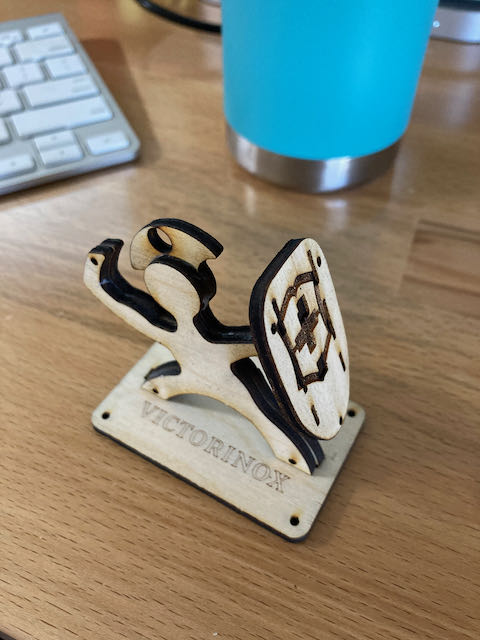 And best yet with the additional cutting power I can get through 1/4″ plywood with relative ease. Below is a ziplock storage container I just made. 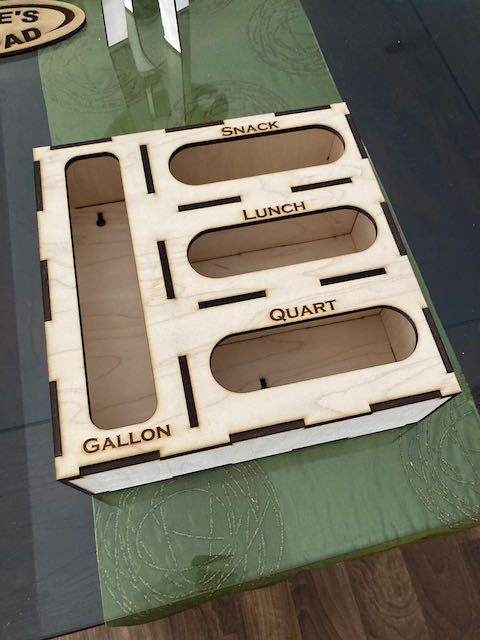 Anyway the 50 watt laser arrived in great shape, worked right out of the box, performs consistently and makes clean effortless cuts.  The only issues I have encountered are not related to hardware and the inclusion of a water chiller has improved my quality of life greatly.