I have decided to try some Shelly Home Automation products and stumbled across the Shelly Flood Sensor. 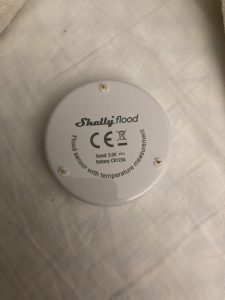 Having a water sensor is pretty important in my estimation. While I’ve never had a pipe burst I did work with a guy once who deployed overseas for several months and his ice maker hose ruptured right after he left and leaked for MONTHS!

So I’m going to get several more of these now that I’ve worked through the installation of one of them. I intend to place them by the ice maker hose, the washing machine, under the sinks, in the hot water heater pan, and in the A/C secondary pan.

First I’ll start with what is bad about this thing.  And I’ll pull no punches.

The Shelly app fucking sucks. It doesn’t suck. It fucking sucks. I hope that is clear.  This is the  3rd Shelly device I have installed and all three of them have been a gunfight.  I wish I could tell you how I installed this but I have no idea.  I did it at least 4 times, the app said it was included into my wifi network and by golly it was not.  It also never showed up in the Shelly app.

So then somehow after the 4th time or so it actually appears in the app and then it wants me to put it in a room.  Well the screen where you configure it WON’T LET YOU ADD A ROOM.  So here I am with this device that took me 4 times to install and now I have to back out of the semi-successful installation and go create a room and then try to install it again.

Once it is installed everything is FINE AND DANDY.  Great even.   When it installed it added the Shelly Cloud (which I usually don’t enable as I don’t like exposed services to the internet) however as soon as I set it in water it emailed me.   That’s cool! But I don’t check my email that often actually and would prefer a text.

Then I found out it has an MQTT component.  It is buried under Internet > Advanced > Developer Settings, but it is in there.  I added my MQTT broker and then found the topic and was able to add an automation to Home Assistant so that it would SEND ME A TEXT!.

The part I put in red you’ll want to ensure you put in YOUR correct topic.

Anyway I dipped it in some water and BAM……me and my lady both got texts almost as soon as the alarm went off.  For my service (notify) I used Twilio which is a bit of a bear to set up but once it is set up it is set up.  For my money getting a text for things happening around the house will always get my attention constantly, even in the middle of the night.

Another thing that is a little weird, but not a dealbreaker, is the way Home Assistant deals with it.  Since it is a battery device it only checks in every once in a while.  After I got it wet the alarm went off and showed as “WET” in my console until the next time it left sleep mode.  While not optimum I wish it kept up with the state better.  And I think this is much more of a HomeAssistant thing than it is a Shelly Flood thing.

As long as I get those texts when the alarm senses water I don’t really give a hoot about how it appears in Home Assistant to the point that I may not include it as a viewable sensor anyway.

The audible alarm isn’t horribly loud but I think under most circumstances you’d hear it.  And of course if you aren’t home that email from Shelly and the text from Home Assistant (Twilio) are HUGE!

The price is right but it doesn’t come with a CR123 battery which are kinda expensive in their own right.  Battery life is advertised as 18 months and I’ll believe that when I see it.  It also has a temperature sensor in it.  I see no real value in the temperature sensor and it is just one more thing sucking on the battery electrons.   Your mileage may vary but I don’t have any useful need for a temperature sensor which is not addressable but every once in a great while when the device wakes up and checks in online.

It should have a Wake on Ping or Wake on LAN feature maybe but I’m aware that this too would chomp on the battery.

Okay…….that’s enough.  You might think I don’t like the device, but I really do.  It sits quietly and unobtrusively out of sight, does its job, and sends me a text when the sensor state flips from dry to wet (false to true in MQTT speak).  That’s all you need a water sensor to do.  Just tell you.  For the price it is worth a little hassle with the app but please Shelly………………..YOUR APP IS CRAP!