Finally got around to pulling my old NAS server out of the moving box and hook it up.  It had been out of service for about 3 months.

One of my 4TB Western Digital Red Hard Drives gave up the ghost and also FreeNAS is now TrueNAS.  I didn’t catch that change because my server was kind of “set and forget”.

I decided to move to Unraid which uses Docker containers rather than “Jails” such as are used in FreeNAS.  Jails were always kind of hard for me, especially upgrading.

Unraid is a snap to upgrade the container and it runs all the stuff I want to run such as HomeAssistant, Emby, Plex, Apple Time Machine, etc.

Since I’m upgrading it was tempting to get cutting edge stuff.  However, in server builds faster and sexier is not always better.  Why?  Because a server is on 24/7 and that bleeding edge  motherboard and chip and power supply and 5 or 6 huge case fans will put a dent in your power bill.

Unless you are doing something crazy you really should consider a platform that SIPS power.  Serving files and streaming your movies on the network really doesn’t take that much overhead, especially if you have plenty of RAM.

I personally like motherboards with the Intel Atom chips.  Let’s pro and con the motherboard I chose.  The Asrock C3558D4I-4L 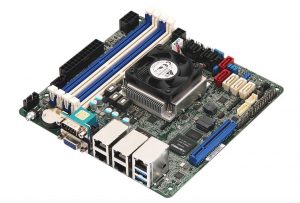 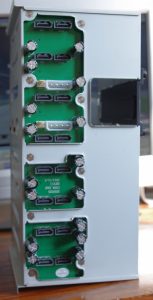 Backplane with SATA and SAS connectors

Although I’m a tech guy I firmly believe the newest and fastest is NOT always best.  Servers are all about STABILITY, silence, and not driving your power bill up through the roof.  Just for fun I started looking at Xeon processor builds which not only are expensive but the chips use 3x’s the power if not more dependent on chip selection.   IF YOU DON’T NEED THE POWER, DON’T GET IT.  My Intel Atom motherboard, while seemingly laughable to NAS power users DOES THE JOB, streaming and transcoding from Emby and Plex does’t choke and that is the heaviest load I put on it.   Also more watts means more power, which means more heat, which means more fans, which means more fan noise.

Also if you do a deep dive on NAS building you’ll find most of the whiz kids will build a NAS with a Raspberry Pi 4 and then brag about how awesome it is.  They run OpenMediaVault on it or heck you could just use Samba (SMB) to serve up files.  Anyway a Pi has nowhere near the amount of CPU power that my build above has.  If a Pi NAS is AWESOME…….this is awesome-r.

I’m reusing my case (Silverstone DS380) which is several years old and all I really did was replace  the bad WD Red 4TB hard drive and picked up 32 GB of DDR4 2133MHz RAM.

My upgrade path is pretty minimal and I will probably take my Asrock C2750D4i and slap it in another case with some old hard drives and use it for an emergency back up server.  I am TOAST if my MQTT server ever goes down.

Anyway, if I made a point here it is that I think a lot of people overbuild servers.  Fast = heat and power consumption.  Heat = dead parts sooner.