Your house may have numerous computing devices which means you probably have data you want backed up.  Yes, there are all manner of cloud services (Google Drive, Dropbox, iCloud, etc.) that you can utilize and they are indeed handy but your data now exists on SOMEONE ELSE’S COMPUTER.  And maybe that is what you want because there is something to be said for off site back up’s.  If there is a natural disaster and something tragic happens then you may lose all your data if it is stored locally.

That is a subject all in itself but back when I was working I built two small, identical NAS servers and just took one to work.  Because there was no private internet connectivity besides a phone hotspot, I would just bring one from home and take the other one back home to update it.  Again, off site back ups are an entirely different subject.

Another very common reason you might want a dedicated locally controlled server would be to rip all those DVD movies, and CD music you have to a media server.  Or a NAS server can act as storage for your security cameras (to hell with paying some company a monthly fee for your video) or for DVR.  I have a couple favorite old shows that I record currently from over the air (OTA) TV to my media server.

And if you build a device that is probably going to be on 24/7 you probably should exploit the heck out of it and make it do stuff.  Let’s build a NAS, shall we?

Before we start I strongly recommend that you take the time to check out a couple of web sites. In my opinion the information on these sites is required reading before building a NAS.

Also before I start with the build, I’ll discuss the current things I find useful about having a NAS.  At some point when you add a lot of functionality to Network Attached STORAGE you can probably, safely call it a Home Lab Server.   Call it either one.  Here is what I do:

Enough sales pitch on NAS devices.  You need one.  You want one.

Depending on WHAT YOU DO will depend on what kind of hardware you need.  If you only want to back up a TB or 2 of data …………don’t build a freaking $2000 Home Lab server.   If you want to run 15 virtual machines with all your favorite OS’s………..don’t build a Raspberry Pi NAS.

One more thing to think about.  If your server is on 24/7 and you don’t need a massive Home Lab server your NAS should SIP power, not gobble it.  State of the art CPU’s and an array of cheap mechanical hard drives have the potential to consume a lot of wattage.  The more watts you run, the higher your electricity bill will be.

As per my requirements above you can see I would benefit from a super fast computer with lots of memory.  Ripping movies and running virtual machines takes quite a bit of CPU cycles and memory.  However, comma, I currently run a pretty low power machine based on an Intel Atom CPU with 4 cores @ 2.2GHz.  The board is an AsrockRack C3558D4i-4L.  Throw in 16GB of decent RAM and a few cheap hard drives and this is serious bang for the buck.  As far as building a good solid QUIET and CAPABLE server this is very ECONOMICAL.  I doubt MOST people would need more and I imagine for MOST people this would be overkill anyway.

The Gods of NAS building might scoff at my Intel Atom based server board but let me just say this: 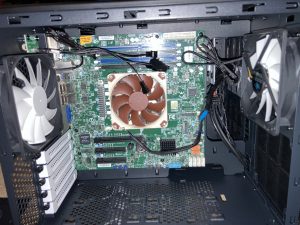 I kind of spared no expense here but I did save about 40-50% by buying a used CPU.  I found an eBay seller with a couple thousand transactions and a 100% feedback so I feel pretty confident about the purchase. 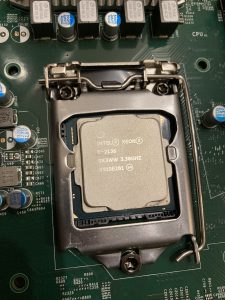 You could also cut costs big time by buying consumer grade hard drives.  The word RAID as it relates to a “Redundant Array of INEXPENSIVE Disks” still holds true.

Also I cut some corners with the RAM. The specs of the RAM are correct and the price is really cheap but sometimes you get what you pay for.  We’ll see how it works out.  I will build up a back up server and nothing I do is SUPER critical anyway so if the RAM craps out I’ll be able to work around it.

The Fractal Node 804 case is bigger than I thought it would be but I’ve been used to Mini-ITX motherboards in my previous builds.   It’s fairly huge. 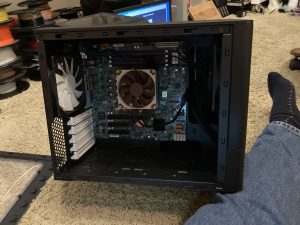 You might notice I have an 8TB drive in the mix.  I run UnRaid for my server OS.  Unraid needs a parity disk that is larger than any other disk in the system.  If you are running TrueNAS you can forgo the parity disk which will save some cash.  Also while you can boot from an SSD most folks run TrueNAS from flash drives.  Put two of them in for redundancy should one fail.  $14 worth of flash drives with TrueNAS will eliminate that SSD drive.  Anyway, depending on your OS of choice your HDD requirements can vary.  Unraid also needs a fast cache drive, hence the SSD.  You won’t NEED that with TrueNAS.

I also see that I could get a Motherboard, CPU, and memory (albeit not these particular ones) really cheap on Facebook Marketplace.  There are several military installations near me and seemingly the fine young Patriots are always upgrading their computers and selling the old parts.   If money were a strong consideration I’d shop Marketplace for a good motherboard and CPU and memory deal and if necessary I could add a SATA card for more ports. Again, a generation or two or three old component mix is still maybe overkill for what you may be doing.  An Intel i3 is probably WAY more than enough CPU power, and again my Intel Atom motherboard is not nearly as powerful as an old i3 chip.   All I’m saying is that used parts are a viable solution to keeping costs low and bulding a decent NAS.

One thing I think you should watch out for is boards that require a graphics card.  Integrated graphics is good enough for a NAS and generally way cheaper.  Once you boot up your NAS operating system (i.e. Unraid, TrueNAS, OpenMediaVault, etc.) you are going to manage the device from a web browser on your network.  Speedy graphics are not needed and just add cost to your project. So if you buy a cheap motherboard combo on Marketplace and get it home you may find you need to buy a graphics card before you can boot it.

I recommend sticking with motherboards DESIGNED for server applications. Essentially it will have at least 4 memory slots, several SATA or PCIe slots and integrated graphics.  Some will have a chip soldered on the board as well.  While this limits you from upgrading it generally reduces the cost and generally allows for lower power consumption.  Trade offs.

If you try to save money and buy some old gaming parts you might see your money savings go poof after a year of electric bills.

Another consideration is NOISE.  My AsrockRack server has passive cooling which is great but of course you need fans spinning on those hard drives.  Putting a noisy server by your bed is probably not a great idea.  I have a workshop at one end of the house with frickin’ laser beams and 3D printers and exercise equipment and a bit of noise is A Okay in that space.

So let me summarize the key points in your server build:

Supermicro has a unique BMC or IPMI password now.  It used to be ADMIN/ADMIN.  Now there is a sticker on the board and CPU dust cover.  It has two entries.

That would lead you to believe that BMC is the user name and PWD is the password.  They have a whole freaking manual for BMC and IPMI.  While it talks about the unique password NOWHERE DOES IT SAY THAT THE USER NAME IS ADMIN.   Grrrrrrrrrrrrr.  Took me a bit to figure it out.

The Supermicro board I used does NOT have PCIe connectors on the board.  There are 6 SATA slots and that is it.  To expand you need to to buy an actual PCIe card.  Not a dealbreaker but my AsrockRack Intel Atom boards have 2 built-in PCIe boards.  They also come with PCIe to SATA cables.  I can add 8 more drives to them.  Fortunately I have will just be running 6 disks (including the optical drive) with no desire to really build beyond that.

Yeah, I spent a fair amount of cash on this server but it’s flipping awesome, somewhat future proof for a while and I will use my old rig as a back up server and a platform to experiment on.   Anyway my Unraid server project is done, and it is perfect for managing my digital life and media server needs.