I recently picked up a Uniden BCD325P2 and am currently putting it through its paces.  The scanner is circa 2015 so it isn’t a new offering and I got mine used which is probably the cheapest way to buy one of these.

I don’t regurgitate specs here.  I can’t give you the specifications better than Uniden can.  What I can do is to use something from the common man standpoint and tell you what I think of it.

There is a lot to like about this scanner and first and foremost my favorite feature may be that it uses AA batteries.  Scanners with rechargeable brick batteries are cool but when they drop dead they must immediately be tethered to a power source.  You can also use AA rechargeable batteries in this scanner so you kind of have the best of both worlds.

Also the scanner is really lightweight compared to my Uniden SDS100 or Whistler TRX-1.  Much more suited to the backpack or belt clip or just carrying it around in your hand.

On the “I Don’t Like” side of the equation, it just doesn’t do well with my local Simulcast system, New Bern Public Safety which is a P25 Phase 1 LSM system.   I’m not done playing with P25 threshold settings or using a lesser antenna to try to cut reception from one of the two towers near me.

Now that I have one good, and one bad……Let’s dig in a little deeper.

It’s kind of difficult to review this scanner because I already own a Uniden SDS100, which has got to be the best handheld scanner on the planet.  The SDS100 can be programmed with a zip code input which makes it a piece of cake for a first time scanner user/programmer.

The BCD325P2 doesn’t even come with programming software at all!  In order to program it the directions say to do it manually.  PHEW!  That could be insane for the first time user.

However, the BCD325P2 can be programmed via 3rd party software such as Proscan, Butel Arc-XT-Basic or Arc-XT Pro, or via FreeScan.  Freescan is freeware whereas the other two are paid versions.  I already have Proscan so I’m set.  I have no experience at all with Freescan.  Below is a pic of the Proscan interface. 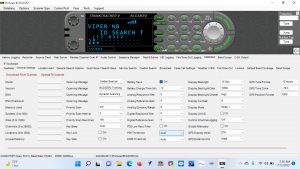 Even though you can zip code program an SDS100 from an up to date database it pulls in too much stuff that is of no interest to me.  So the way I end up programming the BCD325P2 is really no different than how I program any other scanner.  Go through the State, County and City systems and import what I want to the scanner.  So while things CAN be easier…….easier doesn’t always net you the best results.

Even with 3rd party software the only real way to get systems into the radio is to have a RadioReference.com subscription. 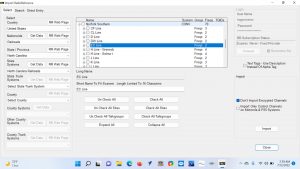 Between the 3rd party software and the subscription at RR you may as well have ponied up the money to buy the Uniden SDS100.

Of course you can buy the BCD325P2 from a scanner store such as BearCat Warehouse or Scanner Master and they will pre-program it for you, however, you are going to pay for that too.  Right around $70 or $75 depending on which place you buy it from.  This reminds me of living in Japan.  The government owns all the transportation and it costs as much to drive, fly, or take the train.

MORE ON PROGRAMMING:  The BCD325Ps does not have an SD Card for storage and uses something called Dynamically Allocated Channel Memory.  Why does that matter?  On my SDS100 and BCD436HP I can store the entirety of the RadioReference.com database on my SD Card.  With Dynamic Memory there are hard limits:

Let me translate in English.  I track a statewide system called North Carolina VIPER. The number of talk group ID’s exceeds the limit of 500 in the scanner.  So while I’m going through the favorites list to program and I’m selecting the State, and County talk groups I want to hear I EASILY EXCEED the limits.  When a call comes in from doing an ID Search and it isn’t programmed into the scanner you’ll get no text (Alpha) tags.  It’ll just have an ID number displayed on the screen.  In short, you have no idea who is talking.  Unless you can figure it out you’ll be stumped.  The first few times I tried programming (with Proscan) it barked at me and told me there were too many Groups and ID’s selected.  Very frustrating.   This may or may not be an issue with you depending on where you live and what you track.

Let’s get back to the Simulcast issue.  While writing this I’ve been dabbling with all manner of settings and I have to report that Simulcast distortion is pretty prevalent with this scanner ON MY LOCAL SYSTEM AT MY LOCATION..  If you have a digital P25 system that has more than one antenna tower in your area, this may not be the scanner for you.  In fact, it may not be the scanner for me.  The system I’m having trouble with is a dealbreaker for me.  If the scanner won’t get it, I need to move on.

However, I have found that changing the P25 threshold value from “Auto” to” 8 or 6″ helps considerably with the Simulcast distortion issue.  (SETTINGS>P25 THRESHOLD) .  Also if I get the scanner away from my body I get most of the system calls however they are sometimes a tiny bit chopped up.  On a scale of 0-10 it is an 8.

UPDATE:  After setting the P25 threshold to 6 and setting the PL filter to “ON”, using the scanner outside just away from my body I raised my score from an 8 to a 9.

UPDATE 2:  After conversing with a Mr. Dan Bowman in a Uniden Users Facebook Group he indicated the following regarding manual threshold settings:

And indeed after pulling up the system notes on RadioReference.com it shows it is built by Harris as Mr. Bowman also pointed out:

“This is the new Project 25 TRS that has replaced the older legacy Type-I trunking system built by Motorola. Built by Harris Radio, Inc.”

I bumped my threshold setting from 6 to 7 and it is wildly improved.  Still not PERFECT but WAY IMPROVED. 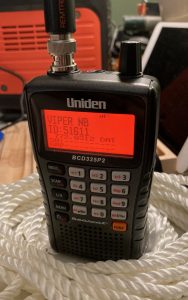 The screen is not that vivid and this is a scanner that you listen to AND NOT WATCH.

The orange backlight is a great contrast and I set mine to come on when the squelch breaks (when a call comes in).

That probably cuts in to battery life pretty well though.  I’ll turn that off once I work through setting it all up.

Watching the screen though makes me crazy.  For some reason everything doesn’t display.  Case in point.  I programmed in Norfolk Southern Railroad EC Line.  You never see it scroll by the screen.  It never displays.  Not even for a brief flash.  But in fact if they transmit it stops and displays correctly.  Same with a DMR Cluster I follow and same with Progress Energy here.  But I do see the trunked frequency roll by on the Progress Energy trunked system.   So the display scrolling is goofy if you ask me.  On all my other scanners everything loaded in Favorites displays even if it is just a flash.

The P25 systems can be set from ID SCAN to ID SEARCH which makes sure you won’t miss a call if the Talkgroup is not in the database.

It has a GPS feature and in fact the guy I bought it from included a GPS puck and cable.  I confirmed it works great.

All in all this is a neat little scanner.  It has most of the features of its big brother the SDS100 but harder to program unless you use 3rd party software.

NOTE:  As I’m writing this blog there is a shooting in downtown New Bern.  In order to get as much information as possible I turned off the BCD325P2 and grabbed my SDS100.

So I guess what I’m saying there is that given my location, and the systems I track the BCD325P2 just doesn’t hold a candle to the SDS100.  Unless you are on a TIGHT budget, buy an SDS100.

Now lets say you lived in another County than me.  I live pretty much within a mile of the Craven/Jones county line.  Jones County has a single tower and I can receive them just fine.  Only problem is I don’t much care what goes on in Jones county.  I guess what I’m saying is if you lived a couple miles from me this WOULD BE an excellent choice of scanner for you.

Conclusion:  This is a big boy scanner IF you don’t have a Simulcast system.   Just because you have Simulcast doesn’t mean it won’t work well but gone are the days when you can go to a Radio Shack or local Ham or CB shop and hold one in your hands and listen for yourself.

If you track LARGE Statewide systems this scanner could be frustrating.  Get a scanner with an SD Card that allows you to store all talk group ID’s for a system and not just 500.

And you’re only going to program this EASILY if you have 3rd party software AND a RadioReference.com Subscription account.

I’m torn.  As a guy who has multiple scanners and I frequently listen to 2 or more at the time, each one being programmed differently, I can definitely work this scanner into the mix and use it effectively.  However, as a stand alone scanner, for me, it won’t cut the mustard.  I recommend this scanner if you live in SMALL TOWN USA inside of SMALL STATE USA and there are no Simulcast systems.

Other than that I recommend it as Scanner #2 that you just program one small system on, or as a beater scanner to throw in the camper,  If you are an Uber Scanner Geek who tracks the big Statewide system ………….get a Uniden BCD436, SDS100, or Whistler TRX-1.