Always wanted one of these Uniden BCD436HP scanners but the cost was always prohibitive.  For some reason Amazon is running them at around 30% off currently.

The BCD436HP is circa 2014 which makes it OLD in electronics years, and back then digital trunking scanners weren’t really designed to combat Simulcast distortion.  That is where a digital system has multiple antenna towers that broadcast the exact same signal at the exact same time.   Some scanners getting hit with multiple signals will distort, have choppy voice, or robot voice.

The only two scanners on the entirety of planet earth designed from the ground up to deal with Simulcast are the Uniden SDS100 and the Uniden SDS200.

So it doesn’t make a lot of sense to spend big money on a scanner that might choke when just a bit more money gets you a sure thing.  Where I live there is a P25 Phase 1 LSM system that will bring most scanners to their Simulcast knees.  Within moments of slapping some batteries in a scanner I will know if it can deal with Simulcast or not.  Remember when you could actually go to a local store and test a radio before you bought it?  Sadly those days are no more.

Anyway, I didn’t even want to take a chance on an old scanner that was expensive and might not work.  That is, until the price dropped dramatically.  After turning it on for the first time within seconds I received a call on my local Simulcast system and the BCD436HP dealt with it PERFECTLY.  This scanner is a keeper.

NOTE:  Simulcast is odd as hell.  Just because it works in my location doesn’t mean it will work across town, on the system in the next town over, or at your location, wherever that is.

First and foremost it has a black and white LCD that I think is impossible to see unless you set the backlight to come on when a call comes in (or you turn it on manually).   Angle has a lot to do with it and I found this amazing 3D printed stand which sets it at the perfect viewing angle that improves things dramatically.  There are a few variants and the one I printed was the Table Top version. 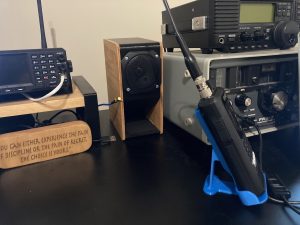 Now that we’ve solved the most obvious problem, let’s deal with a less obvious problem.  Whenever I get a new Uniden scanner I connect it to an excellent hunk of software called Proscan.  Proscan has a history logging feature and I can see if my programming of Talk Group ID’s is complete for my area.  It’s better to see “NEW BERN POLICE” on the screen than “TGID 200” on the screen cuz I don’t know who TGID 200 is.

The two systems I track (New Bern Public Safety, and North Carolina VIPER) do NOT provide COMPLETE Talk Group ID lists to RadioReference.com.  So in this case you would tend to see a lot of “Unknown TGID” entries in the log.   In order to find out who the Talk Group ID’s belong to and what they are for you either have to figure it out by recording, and listening to the groups and manually updating your Favorites list or you need to know someone who has the whole list.

Proscan also lets you connect your scanner via USB and audio cable and allows it to be a server.  Then you can listen to your scanner as a Client on any other Windows computer on your network.  When I connected the scanner for the first time the COM Port was detected by Proscan and began working fine.  That is, until I started the server.  Then there was a gigantic lag in what the scanner was receiving and what it was displaying on the computer.  Maybe 5 seconds or more.  The audio was slower than that.   It was a train wreck.

Then I found that Uniden has specific COM Port serial drivers for the BCD436HP.  They can be downloaded here.  Once I installed that serial port driver it began to work perfectly.

NOTE:  This only seemed to affect Proscan acting as a server.  In Windows 10 or 11 I was able to connect to the scanner and program it via Uniden’s Sentinel software with no issues.  Proscan, when directly connected to the scanner worked flawlessly as well.  That is, until I started the server.   So you may or may not need to install the specific Uniden Serial Driver unless you intend to run Proscan as a server.

That non-color LCD screen and the serial port driver were the only things of note that were odd to me.  Once you see the color LCD screen of the SDS100 or SDS200 it is hard to go back to a black and white LCD screen.

As with all the Uniden scanners if you want to decode DMR, NXDN, or EDACE Provoice, you need to pay for upgrades.  I did install the DMR upgrade.  There isn’t anybody using NXDN around me that I care to hear. And I have other scanners that have that decoder.

Even though the scanner is circa 2014 and the circuitry wasn’t engineered specifically to deal with Simulcast this scanner sure acts a lot like an SDS100 under the hood.  Most of the Menu items are identical to the SDS100.  Nobody has really made a new scanner since around 2018 and 2019 anyway.  Other than some firmware updates not much has changed since 2014 to now and no giant killer scanner appears to be in development either.

I guess what I’m saying here is that for the price (at 30% off that is) and if you don’t have any Simulcast issues, this scanner is a no brainer.   It is a piece of cake to program and it holds the entirety of the RadioReference USA database on it’s SD card.  That means you can just punch in the zip code of where you are and you can begin listening.  While this sounds EASY, and it is EASY, it grabs every freaking Digital and Analog signal anywhere near you and scans through them all.  John’s Rule of Scanning states:

That being said………if you are a computer illiterate and scanner programming instills fear in your heart, DO NOT BUY A SCANNER FROM AMAZON, because there is essentially no Customer Service.  If you buy it from a dealer who specializes in scanners (Bearcat Warehouse, ScannerMaster, Zip Scanners) they will program it for your area for you………but not only will you not enjoy the huge Amazon discount, you’ll pay extra for the programming.

LEARN TO PROGRAM YOUR OWN SCANNER.

All in all this is great scanner.  It seems to have all the programming features of its more expensive big brother, the SDS100, without a color LCD screen.  The antenna that comes with it is crap though.  I can’t think of any scanner that comes with a decent antenna though.   While the antenna it comes with grabs my digital trunking systems fine, the interesting analog stuff a few miles up the road isn’t as good.  Of course your mileage may vary depending on where you live, or what you care about listening to.

CONCLUSIONS:  Great scanner at the current promotional price.  I wouldn’t buy one at full retail price though.   Where I live it works as good as my SDS100 which makes me pretty happy.