This is uniquely frustrating and equally interesting, and also a cry for help.  I’m researching laser history and while there is considerable reference material out there, none of it has anything to do with the timeline of hobby lasers or the timeline of consumer laser products beyond laserdisc players or laser printers, or barcode scanners.

There simply isn’t much documentation of the development of consumer grade desktop lasers. Forum discussions from the early 2000’s now point to a bunch of dead links.  It would take considerable effort to rebuild that knowledge.

Best I can tell the consumer market started at least down this path:

The Chinese developed a CO2 laser that was cheaply made solely for purpose of making rubber stamps for your signature for official documents. But I have no idea when they first began making them. The CO2 laser was invented in 1963 and the oldest reference on the internet I can find for someone in the US buying one of these units is from 2008 off of eBay. 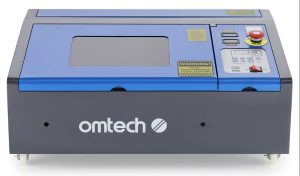 These things have been around at least since then, and maybe a couple of years before. Pre Pandemic you could get one for about $300. Now they are about $450 and currently are affectionately called the K40 as they are 40 watt CO2 lasers.

They originally came with a control board that only worked with software called Moshidraw and I can find no real timeline for that software development either.  I believe that board was referred to as a Moshi board.  The DIY folks began developing boards for these lasers and that continues to this day.  Until recently I owned my own K40 and while they looked pretty polished the purchaser had to upgrade and mod these things to make them sing.  You almost certainly had to add a control board that was compatible with laser software such as Lightburn.

About 2012 or so the DIY people really started messing with them and developed new control boards for them that could talk to 3D printers as the movements are similar.  LaOS and RepRap controllers were utilized and then more specific boards were developed that would interface with graphics software popular in America.  The K40 is still a very popular platform and in some ways superior to desktop diode lasers of today.  It is certainly more powerful and can cut thicker materials.

Even to this day the K40 quality is improved but iffy. If you unbox one, plug it in and it works, and is in alignment…….you should go buy a lottery ticket.

And I can say unequivocally, that if you want to dabble with hobby lasers, owning a K40 is a Rite of Passage.

Also around 2011 DIY geeks started dabbliing and building Diode laser kits, and shortly after that cheap laser kits, again out of China, starting being sold from Alibaba or on eBay.  To my knowledge, nothing caught on though.  I did find a Kickstarter campaign in 2011 called Lasersaur.  To my knowledge that didn’t catch on either.

It seems like if you wanted a desktop laser you had to DIY one or buy one from sources in China that didn’t necessarily have a company name and warranty standing behind them.

Probably the two most popular diode laser companies are Ortur and xTool (my current favorite) although there are a handful of other competitors out there none have caught on like the two I just mentioned.  Ortur’s first diode laser offering was in 2019 and xTool’s was in 2020.

So, the work from home hobby and small business laser segment is a relatively new phenomenon, and it is one that is growing quickly.  However, with product development and rapid technological advances comes an increase in cost.   A desktop machine that once cost a few hundred dollars is now 2, 3 or even 4 times that amount.   That being said, a couple of good production deliveries will pay for your investment RAPIDLY.

CO2 laser development sprung out of the venerable old K40 laser and now you can get machines almost as large as a small car.  I currently own an OMTech 50 watt CO2 laser.  And I am also a believer that a CO2 laser is NOT better than a diode laser, nor is a diode laser better than a CO2 laser.  Both have their STRONG merits.  A CO2 laser can cut faster and cut thicker materials but you can’t throw it in the truck and make dog tags at the local animal shelter event on site with it.

Anyway, I’ll wrap this blog up.  If you know I fouled up the history, or timeline, or missed something substantial……….PLEASE let me know.  I’m now intrigued as to how we got to where we are with desktop lasers.