Side hustle is a thing!  One of the best side hustles going is laser engraving.  In the world of desktop laser machines there are several purchase options out there but most users ultimately pare their selection down to Ortur vs xTool.

I own both an Ortur Laser Master 3 and an xTool D1 Pro.  In the interest of full disclosure, xTool provided me a D1 Pro 20 watt kit to review, however in this article I’ll be mostly comparing the Ortur offering vs an xTool D1 Pro 10 watt, which I purchased with my own funds.  Also in the interest of full disclosure I previously owned two Ortur Laser Master 2 machines.

Cash is King!  In this particular instance it is a virtual dead heat.  Both machines clock in around the $600 mark for their 10 watt offerings.  xTool has a flagship 20 watt machine (for more money), while the Ortur flagship offering is the same machine painted in different colors.  Really Ortur?  Each 10 watt machine shows higher retail prices and both raise to those higher prices occasionally but typically if you are buying just the machine you probably shouldn’t pay much more than $600 at most.  They both offer a similar mix of accessories such as enclosures, air assist kits, extension kits, and rotary devices, and again, most are very similarly priced.

Neither choice is going to be a lot more of an investment than the other.  It should be noted that xTool does offer a 20 watt laser module, and an Infrared module and no similar offering comes out of the Ortur camp.  Generationally, Ortur seems to be lagging behind xTool. 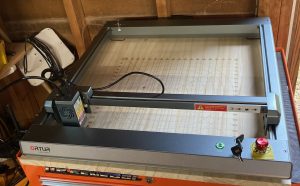 Lasers come in a kit form and need to be assembled.  This can be either a wonderful, or a horrific experience.

And I’m just going to come out and say it.  The Ortur construction was horrific and I blogged about the problems I encountered.

It is almost a virtual certainty in my mind that I received a kit, or at the minimum, components in that kit, that were previously used and returned.  Tool marks were evident on the frame. I couldn’t get one of the set screws which tension the idler belt pulley installed due to stripped threads in the frame. I had to run an M4 metric tap in the offending location to salvage the assembly.  BOOOOOOOOOO.

Installing the belts on the Ortur have you fishing one belt into a dark cavity and hoping to catch the pulley.  It took a couple of frustrating attempts.  Some users remove the cover panels in that area to facilitate access to this area. 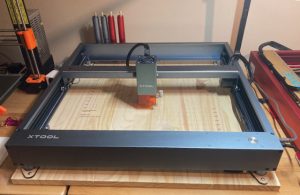 I had no serious issues to report when constructing the xTool D1 Pro.  Assembly was straight forward.  Belts were pre-installed and only needed the shaft and idler assembly to be fitted and tensioned.  Everything was easily visible. 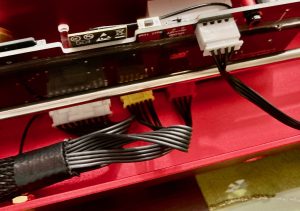 There is one step where the user needs to install three connectors.  It is difficult to access this area and get a straight bite on these connectors.

NOTE:  I took this picture during construction of the 20 watt kit, however, the 10 watt kit frame is 100% identical.

There is not a lot of room to operate in this area.

The xTool machine is heavier and has greater frame rigidity.  The Ortur’s claim to fame is SPEED and it achieves that speed by being light and staying low to the ground.  Too low, in my opinion.  The X Stepper motor is so low that it obstructs you from passing material completely through the frame from the sides. 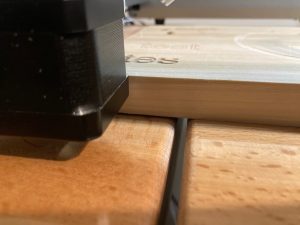 This is a picture I took of 3/4″ stock fed through from the right side of the Ortur machine.  The wood is longer than the 400mm engraving area and would clearly strike the motor when moving along the Y axis towards the rear of the machine.

The xTool frame has great clearance and can accommodate thicker pieces of wood such as this. 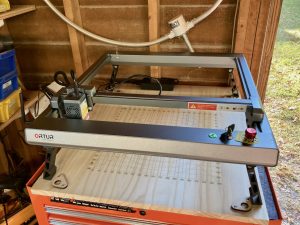 The solution for raising the Ortur is to purchase FFT (foldable feet) at a cost of $79.  I haven’t received mine yet and in the interim I 3D printed a set.  Now I have height but again, at the expense of speed and stability.

I’m sure 3D printed FFT feet are not endorsed by Ortur but at $79 for a set, I don’t really care. I’ll just go slower.  Aluminum or 3D printed, this configuration just does not inspire me to run the machine at high speeds.

While the Ortur CAN be fast, it is difficult to obtain that speed.  Any engraving I did at over 100 mm/sec in speed, the machine danced around and ruined it.  The machine must be secured firmly to a spoilboard.  Real precision is obtained by being built like a tank.  The xTool D1 Pro frame is a tank.  Raising the machine to obtain greater access is done by using their Riser system.

xTool has released a 20 watt output laser module.  They also have a 1064 nm Infrared Laser.  In the last week or two Ortur has posted on their Official Facebook page two posts.  One explaining why they cannot release a 20 watt laser yet.  The other explains that they are having heat issues on their Infrared module.   They also claim that every manufacturer (cough, cough) has the same issues and that they won’t release something that isn’t ready.

The only problem with that statement is that xTool users have been using both devices for some time now.  I use both extensively and haven’t yet had any issues.  xTool is also currently crowdfunding a dual laser (10 watt blue, IR laser) that is a galvo laser.

Ortur is trying and failing at playing catch up.

Each manufacturer can stand some improvement here.  Neither one will sell you a motherboard.  You can only obtain one via warranty.  That means if your motherboard fails, your machine is hard down for a week or more.  Every serious laser business operator needs spare parts.  Especially a motherboard.

Here is where it gets interesting though.  Both machines have a piece of protective glass  over the lens. 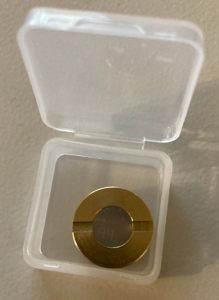 The xTool protective glass is a consumable item and spares can be ordered. xTool even provides a spare protective cover in some of their kits.

There are some users who are taking 14 x 1 mm optical glass and placing them in these brass housings.  The replacement cost is cheap however I am of the belief this is a bad idea.

Any time you put a lens together with protective covering that affects the focal plane.  If you put a different type of glass, or a glass with a different coating in the way of the beam you may reduce efficiency.

Ortur had issues early on with their protective glass breaking.  The glass was subsequently replaced with crystal.  I have no way of knowing which version I have in my laser.  Furthermore Ortur will not sell the protective glass.  Their Support Team told me that if it breaks to send a picture of it and they will replace it.  But here’s the catch:  Only during the warranty period.

So, essentially, they have a known problem that they won’t fix.  After the warranty period you’ll just have to buy a new laser module, I guess.

This is a dealbreaker for me.  Had I known this I would have never purchased an Ortur.  The previous Laser Master 2 machine had grounding issues where static would zap and kill the main board.  Always something with the Ortur.

Winner = xTOOL (but please sell me a motherboard)

Either machine provides excellent engraving output.  Re-positional accuracy on both is impressive.  Ortur has one advantage over xTool which is the ability to use WiFi with Lightburn.  In my book, that is HUGE.  However, don’t get too excited yet. When the laser wifi is connected it runs an FTP and a Telnet server.  Both have absolutely no security whatsoever.  Talk about an Internet of Things (IoT) security risk.

I recommend to NOT use the WiFi.  xTool also has Wifi but it only works with their xTool Creative Space software.

Ultimately the engraving output matters and I score that a tie.

WINNER IN WIFI = Neither one but both are getting close.  For Gods sake though, lock down that FTP and Telnet server, Ortur.

This isn’t even close.  xTool wins in every important way that matters.  Ortur lags way behind in innovation and the ability to get new technology out the door.  The Ortur lens protective cover fiasco is a deal breaker unless you just enjoy wasting $600.  If they were to fix that one issue, or sell spare glass, I’d happily re-think a big segment of this comparison.

There is literally only one choice here.  Ortur has too many issues to be competitive to xTool at the current time.  The low clearance thing is problematic.  Ortur says “OUR MACHINE IS FAST”.  Wonderful.  But if you have to raise the machine to obtain clearance to engrave thicker materials you can kiss that speed goodbye.

Buy the xTool D1 Pro and watch for future offerings such as the F1 galvo laser.  Watch Ortur sit and spin and try to copy xTool offerings.

This is really a shame because Ortur was first to the game in 2020 with a desktop laser and the Laser Master 2 was a cool little machine.  Except for those main board static electricity induced failures (which I never experienced).

Did I mention you should buy the xTool?