Without a doubt the old Silver faced Pioneer Receivers from the 70’s and 80’s was some of the most epic stereo gear ever designed.   Sadly with the advent of cell phones and tablets everybody listens to their music on cheap earbuds while streaming low res music from some far away server.

Well not everybody does that.  But most.  And that means all those old boat anchor sized amps are in the back of the closet, the garage, in the attic and turn up at the estate sale from time to time.

Stupid old guys like me who are trying to relive their childhood will pay top dollar for an old amp that realistically time forgot.   So these days it becomes the challenge of the old audiophile (audiophool) to find one cheap and bring it back to it’s once epic status.

So I scour yard sales, local classified ads, eBay, Letgo, and Craigslist looking for the person who has one who doesn’t know that some 50 year old men will hawk their children for one yet.  So I found an old Pioneer SX-650 on my local Craigslist that wasn’t too expensive.  The SX-650 seems to have been made between 1976 and 1978 and is 35 watts per channel.  All the relevant information about it can be found here and manuals can be downloaded as well provided you create an account.

Here’s my score and I’ve obviously removed the wooden case here.   It’s hard to tell from the picture but it has a thick film of yellow cigarette smoke on everything.

“Rule 1:  Never take a 40 year old amp in your house and leave it.  You have no idea what is living inside.  Open it up outside and clean it!  You’ve been warned.” 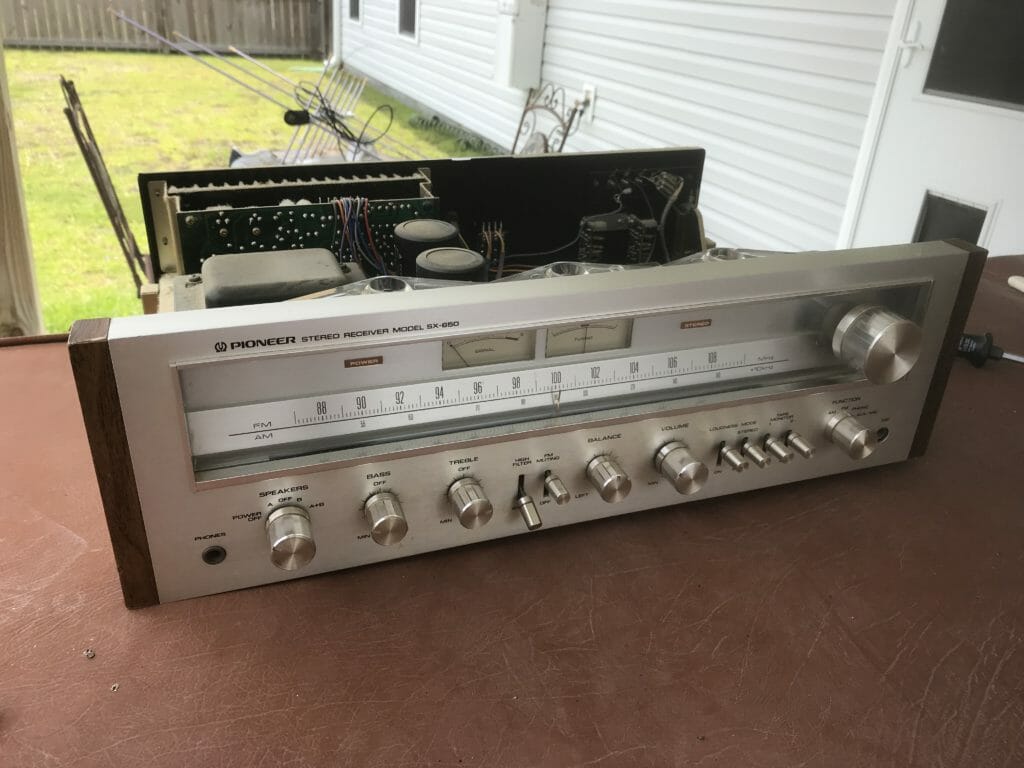 In addition to that it looks like a dust factory on the inside. 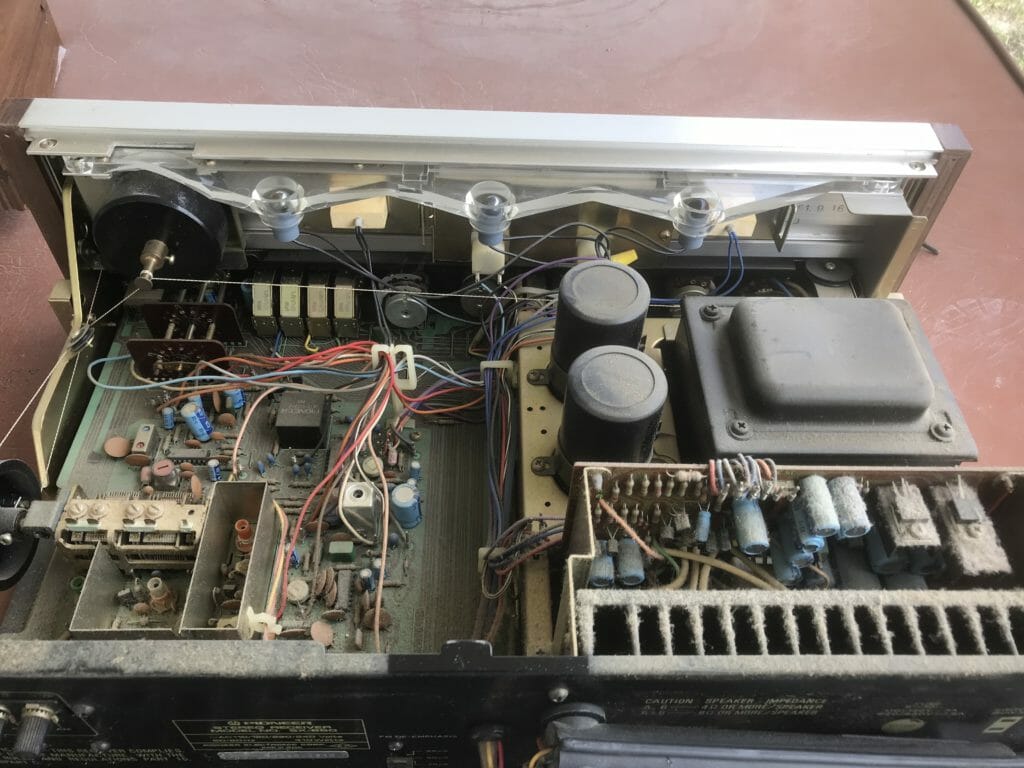 That’s 40 years of dust right there folks.  Other than that though when I picked it up the seller had it working.  I tested all the functions and they appeared to be working fine.  It’s kind of amazing nothing shorted out though.  I had to drop $120 for this but he wanted $150.  I tried for $100 but 120 was as good as it got.  No biggee.  I just have to take care to not put too much money into this in case I want to flip it.

The first thing to do is to clean this dust so I can see what I’m up against if anything.  The first thing I did was to take a very long and soft bristled paint brush to remove the massive dust products. Following that I used contact cleaner with a fast evaporation rate.  You want to exercise some care when spraying that because there are some places it shouldn’t go, but for the most part you can blast away.  The initial clean up turned out great. 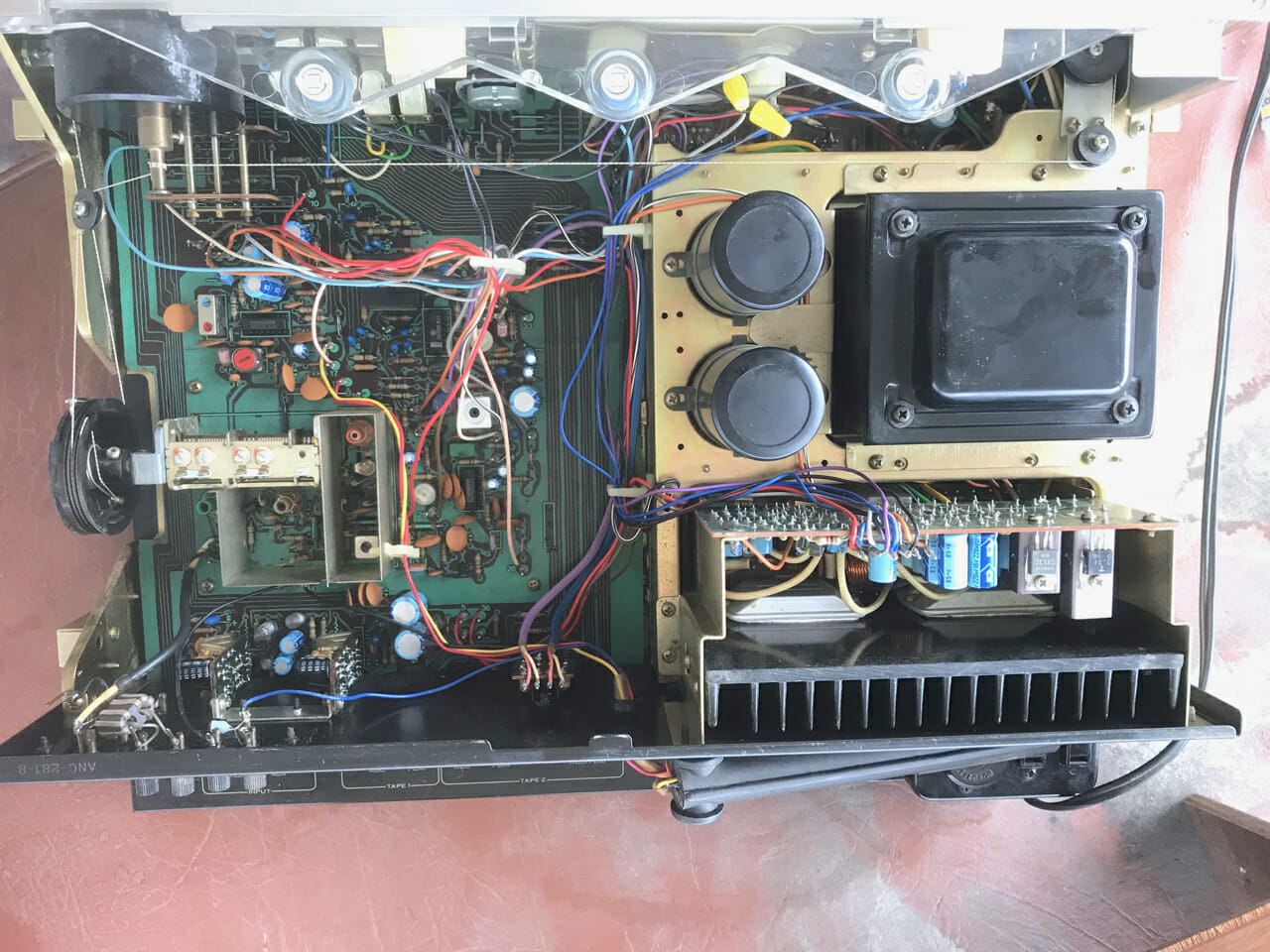 Now I can actually see what I’m up against.  Took me about 30 minutes or so to safely and carefully clean everything.   Once the heavy deposits were gone I used a soft brush again and in stubborn areas used a small toothbrush with isopropyl alcohol.  Really worked good in the corners and flat surfaces around hardware.   I did a real good job here.

Now, we visually inspect and THEN power up.  I see no evidence of bulged or leaking capacitors.  No broken components ……. all is well.  I apply power and only one panel light lights up.  That’s okay.  I have something for that too.  I removed the old soldered in glass incandescent lamp and soldered in a new T10 5 watt LED lamp. 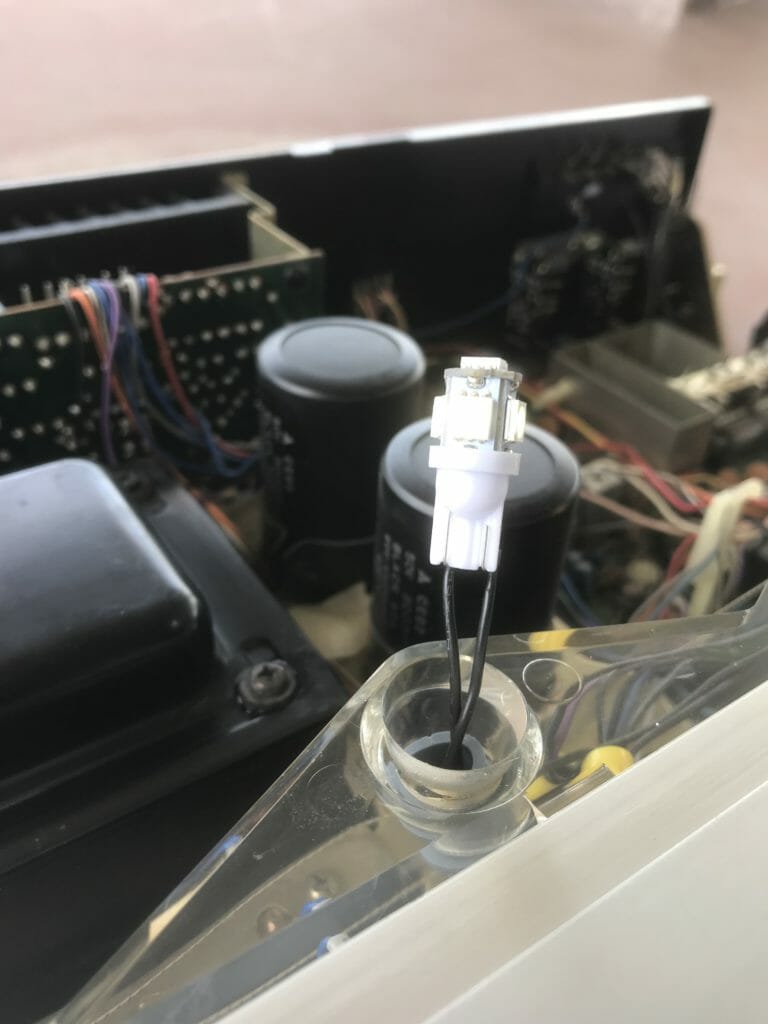 It doesn’t matter which direction you solder in the LED, just tack one wire onto each side of the LED.  Just tack them against the wire.  Doesn’t take much solder or heat.   You might melt the housing a tad but it won’t hurt anything.  I changed out all 3 panel lamps.  You can also solder in various colors and intensities of LED’s as well.

All these T10 5 watt LED’s say that they are for 12 volt systems however they have voltage regulators in them.  They’ll work fine with whatever voltage you feed it within reason.  The Pioneer lamp voltage should be 7.5 volts as per the service manual.   The 12 volt T10 LED’s will work just fine here. 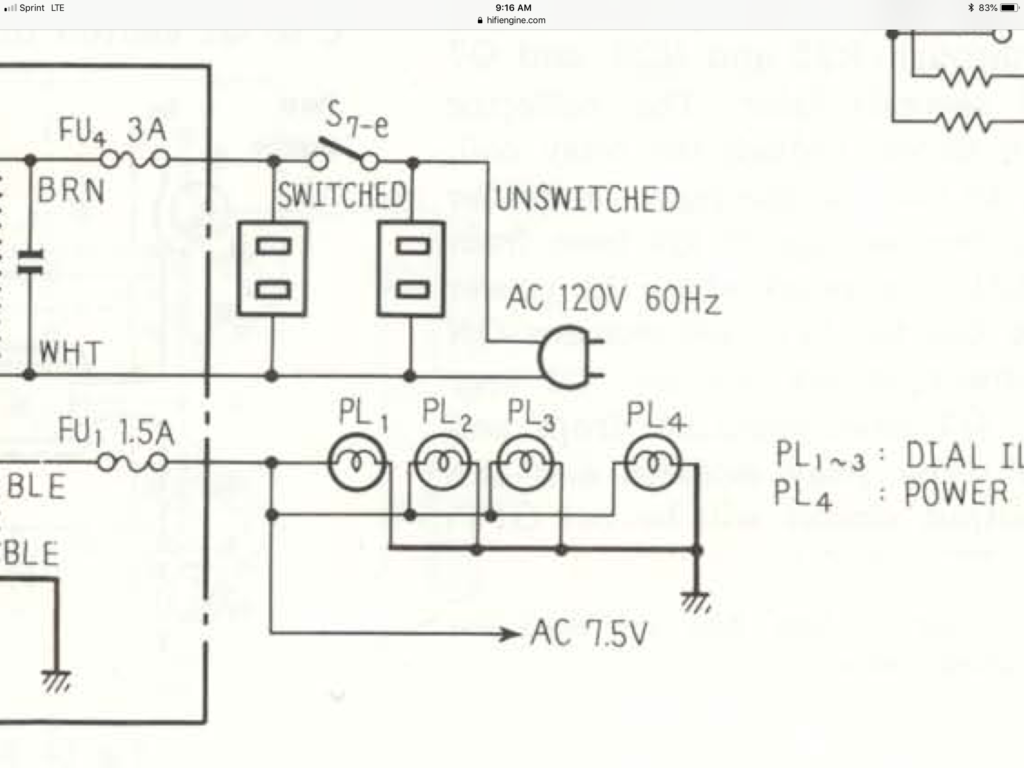 Now lets shoot contact cleaner in all the open switches and dials.  Work back and forth, repeat a time or two letting it dry between applications.  Now you need to lubricate the contacts.  Most stereo guys use something called DeOxIt and while I have some of that I used a Mil-Spec Avionics Corrosion Compound, Mil-PRF-81309.  Only about a thousand times better than DeOxIt.   You can buy Mil-PRF-81309 on line however many companies that make it don’t qualify for the Mil-Spec to sell it to the military.  Check something called the Qualified Product Database or QPD for short.  Or buy some DeOxIt.

All done inside for now.  Now to tackle the yellow nicotine tar on the outside.   First thing I did was remove all the knobs and put them in a bowl of soapy water with a splash of isopropyl alcohol and let it soak for a bit.   Then I took a toothbrush dipped in isopropyl alcohol and scrubbed the heavy stains off.  This has a tendency to just rub the yellow around so you’ll have to come back later with a towel and some isopropyl alcohol for a final wipe.  Might take a couple of passes.  Then brush the dials, wipe the glass and reassemble the case.  My case needs new veneer.  That’ll have to wait for a long weekend or something. 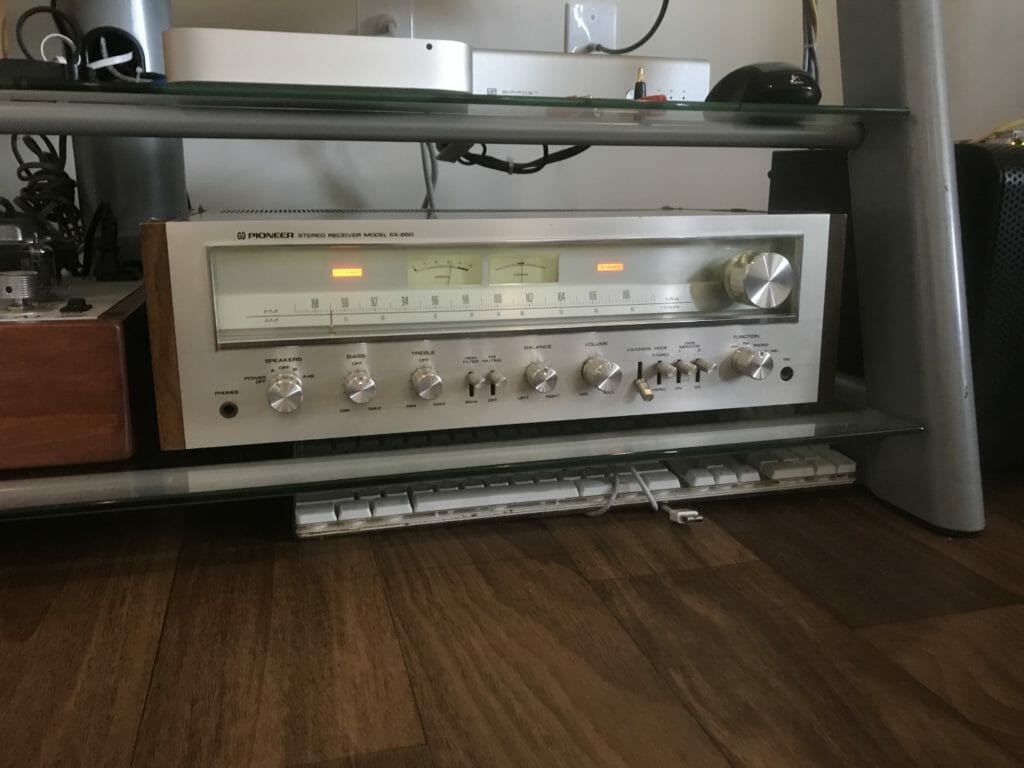 And it works too!

Round 2:  Stripped the old veneer paper off of the case and removed the front blocks getting ready to bring the case back up to speed again.  Couple people asked me how I got the face plate blocks off.   Nothing to it.  Pull off every switch and knob hardware and there are two screws inside on top that hold the faceplate on.  Once the faceplate is off there are three small wood screws on each block.  Couldn’t be easier to remove them. 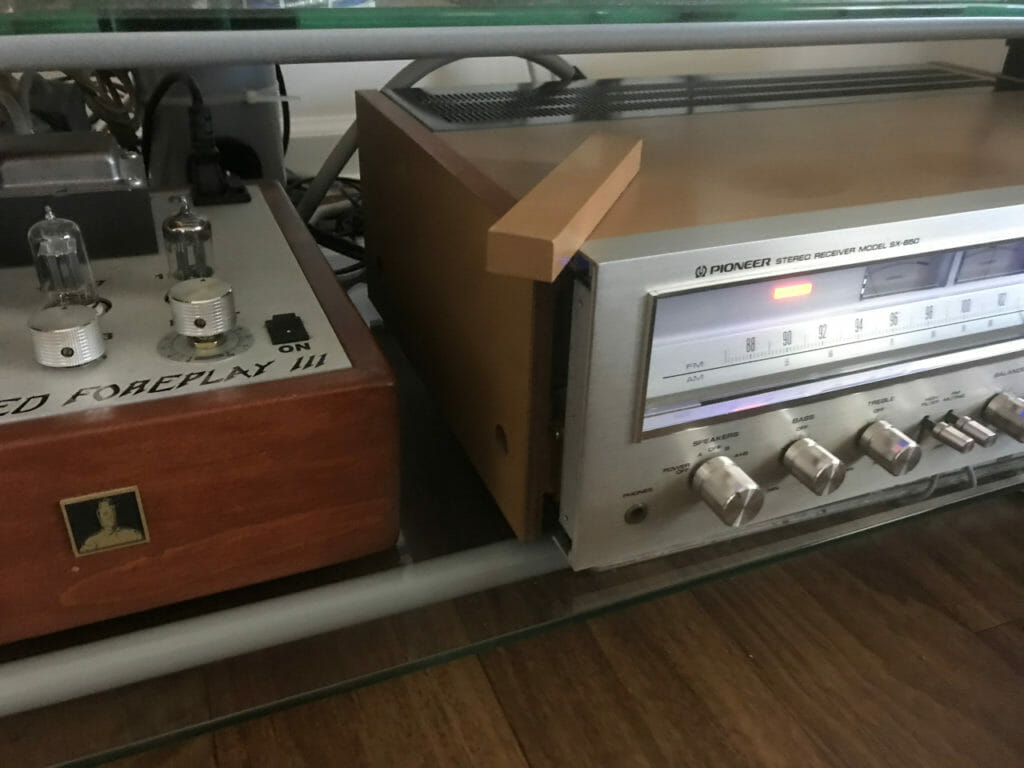 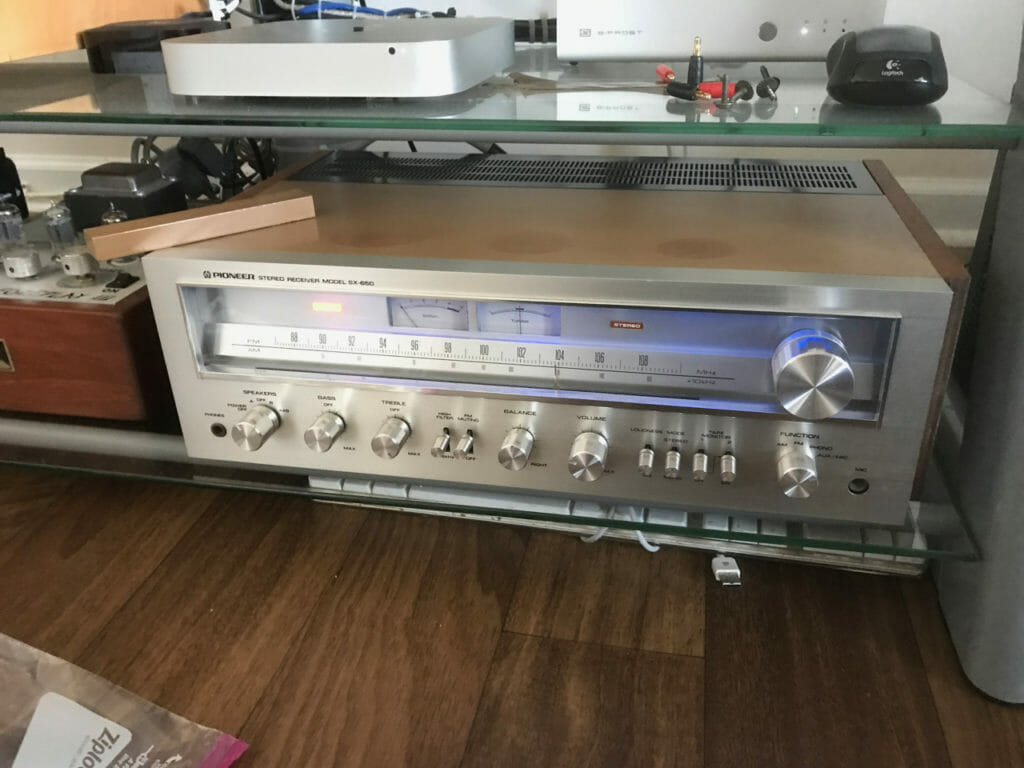 Ordered some Cherry Pressure Sensitive Adhesive Veneer off of Amazon which should be here in a few days. I’ve never veneered anything before however everything is a rectangle so it shouldn’t be too awful.

Added the veneer which turned out to be fairly easy then switched the LED’s back from blue to white to maintain the vintage look. 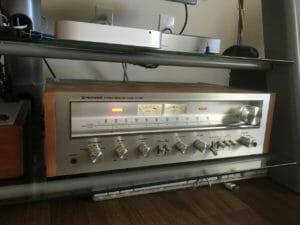 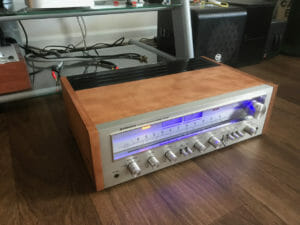 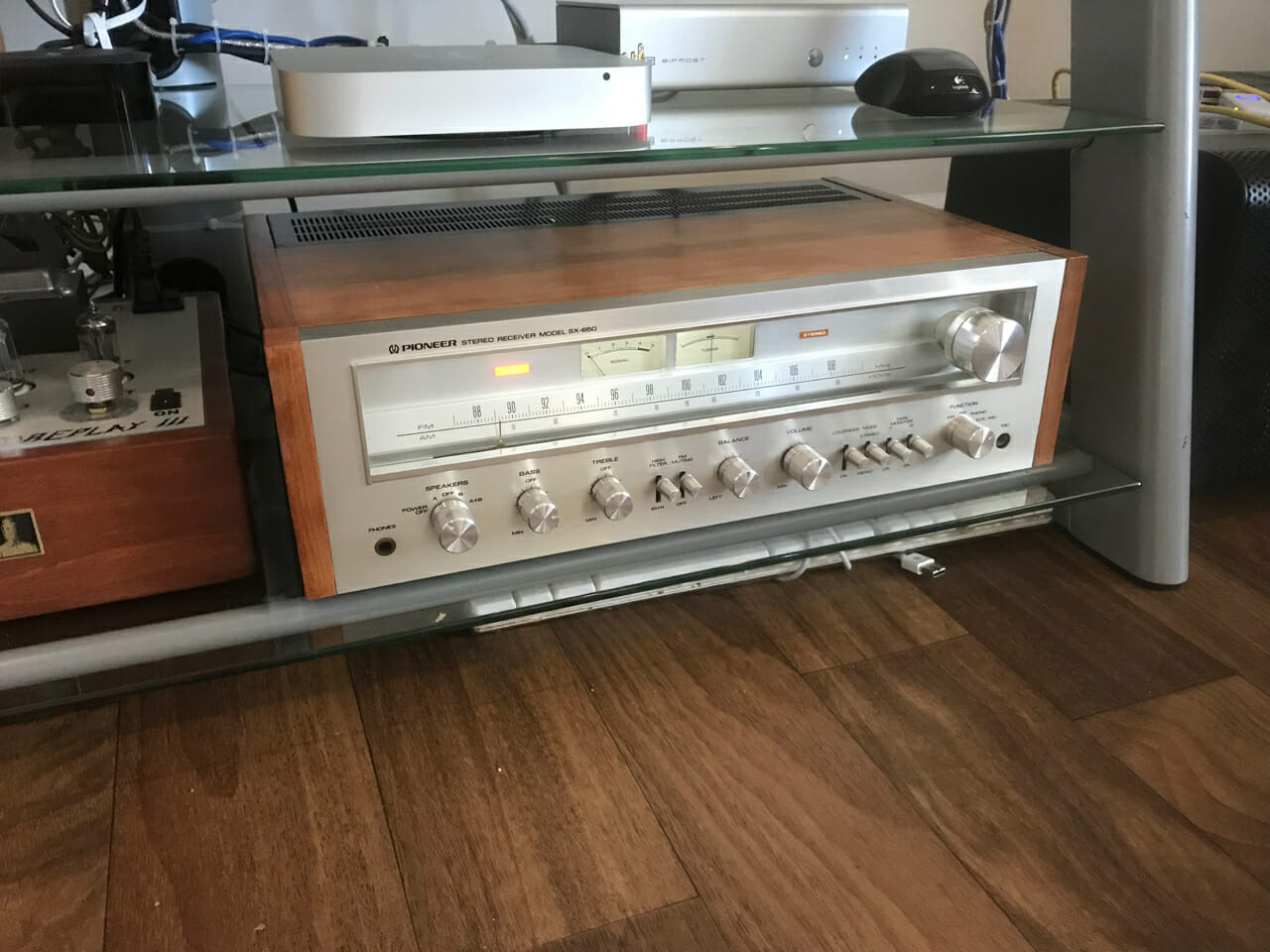 And here’s a quick video of it working.