As Barry Manilow said……….”Looks like we made it”.  The hurricane is over but the aftermath lingers on.   This is me at 2AM.  What a fella won’t do for coffee.  When times are hard having your favorite beverage helps tremendously.  I can’t stress enough what a morale booster it is. 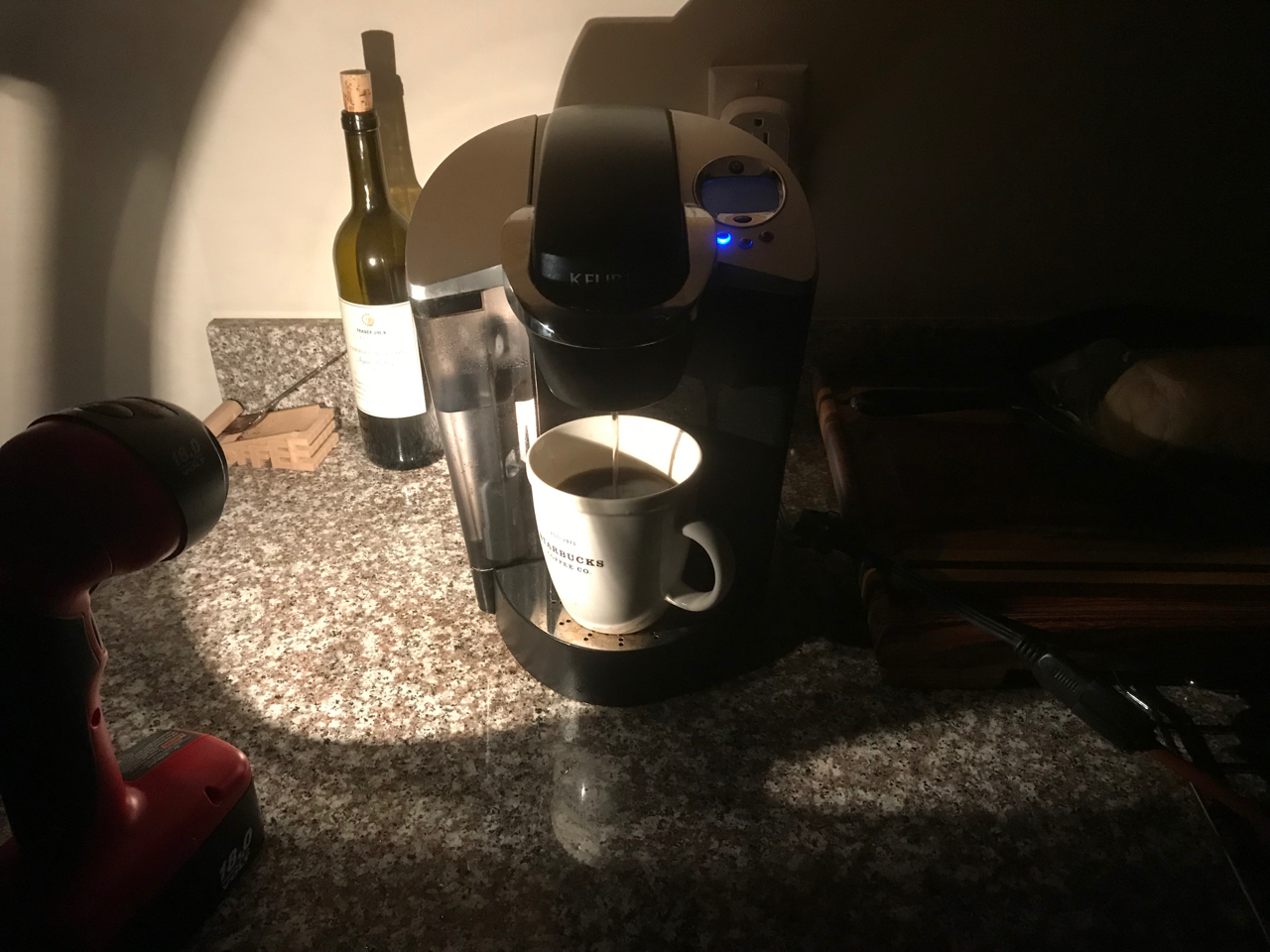 Day 3 of no power begins.  I have a full generator tank and 10 gallons of gas left. I also have 1 inverter generator with about half a tank and THREE more waiting that says I can keep the fridge on a few more days.

And here is the power farm.  I ran the refrigerator most of the night on the little orange Generac IQ2000 2kW generator.  It sips gasoline in economy mode and managed to hold during the compressor kicking in on the fridge all night (and by all night I mean til 2 AM when I woke up).  The real star of the show though is the Westinghouse WH7500E which runs my whole house to include my Air Conditioner.  7500 watts is a LOT and it has a 9000 watt startup capacity which says that things with big requirements and compressors kicking over will get their ass kicked by this.  I can’t say enough good things about this generator.  It literally is a life saver. 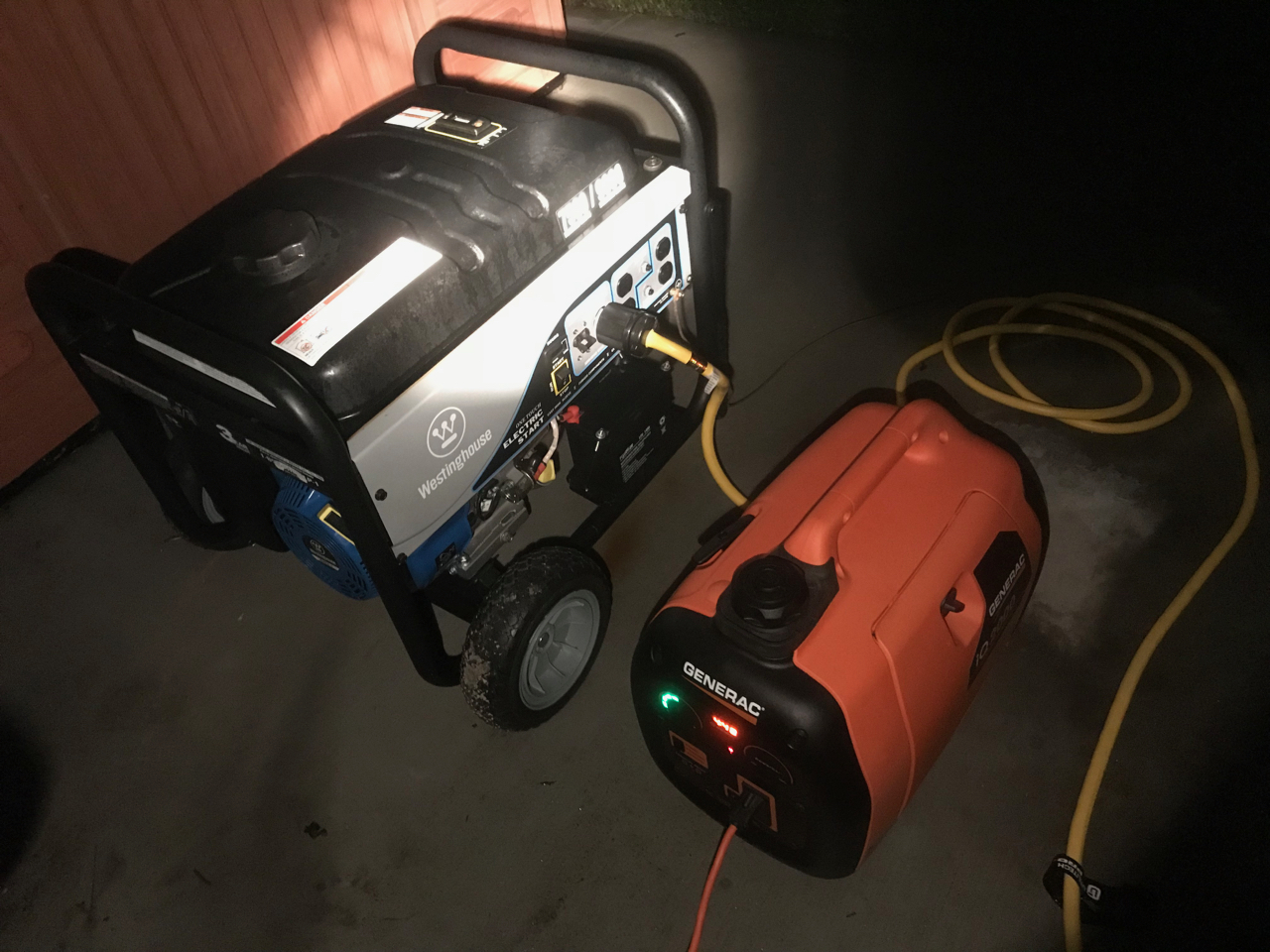 So I have power when I want it.  I haven’t been running 24/7, I wish I could but I’m conserving my resources (read: gasoline).  I started off with about 20 gallons and 10 has gotten me pretty far.  I’m confident the power will come back on soon.

Now, while the hurricane and mostly tropical storm winds have died down it is still RAINING.  My subdivision has multiple ponds and they are all overflowing and beginning to merge like the Borg on Star Trek.  They are also going to most likely breech the roads today. 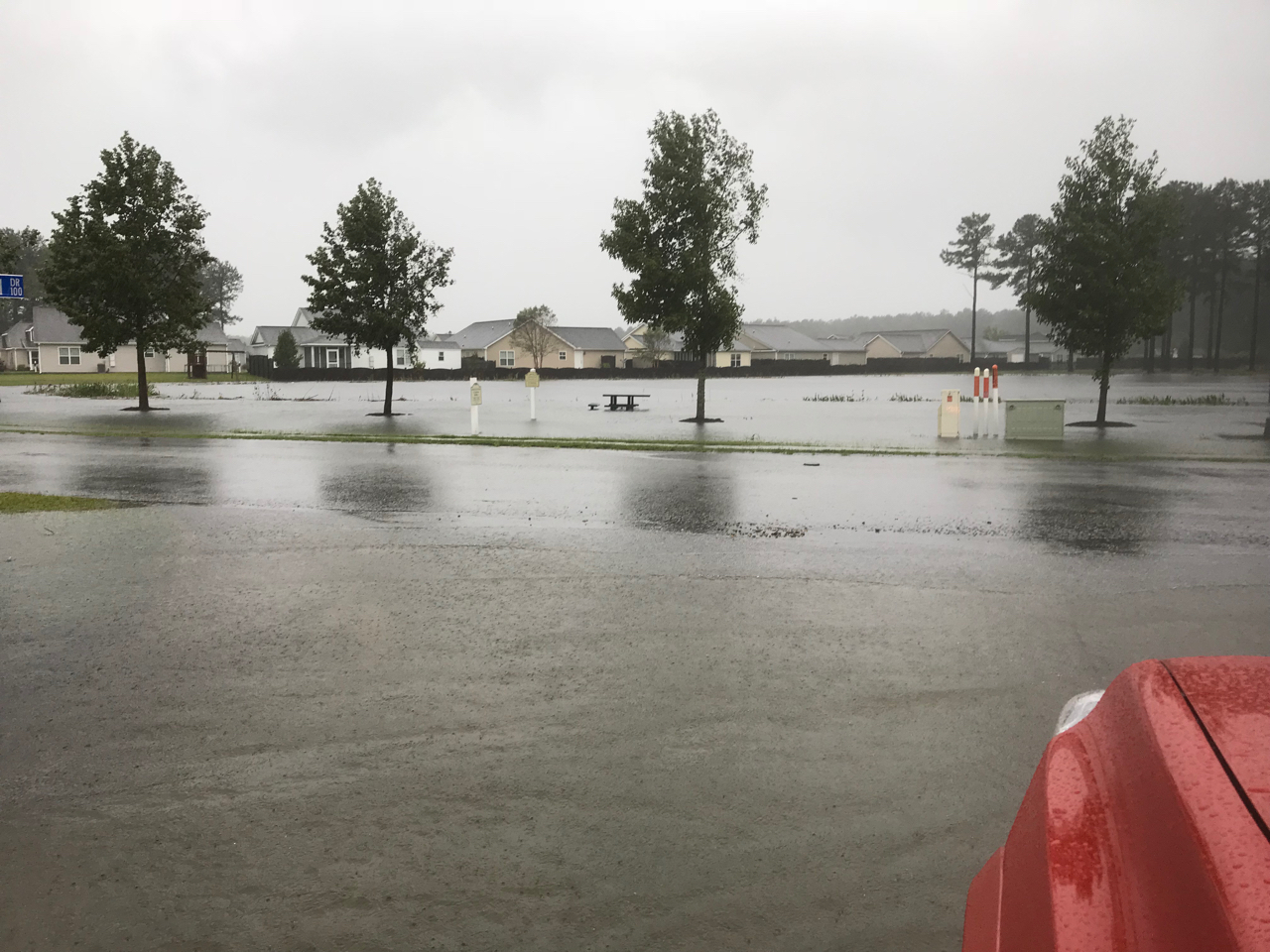 WOW!  This was taken Friday afternoon and it has rained a lot since then although it has subsided somewhat.  The builders cut a ditch a while back to connect two ponds and it has begun to creep up on my back yard fence.  I thought it might breech my fence at some point yesterday but it did not.  I know what you are thinking about the pic below.  “That’s not that close”.  Am I right?  Well let me tell you this.  Generally that ditch has a couple of feet of water across in it and the water rides below the ditch that is cut there.  When it overflows that IN A DAY, and starts creeping up and the weatherman (or pretty weatherlady) is saying “IT’S GONNA RAIN HARD ANOTHER 48 HOURS, EXPECT OVER 20” OF RAIN HERE”………….then you get PLENTY nervous. Let me tell you…………. 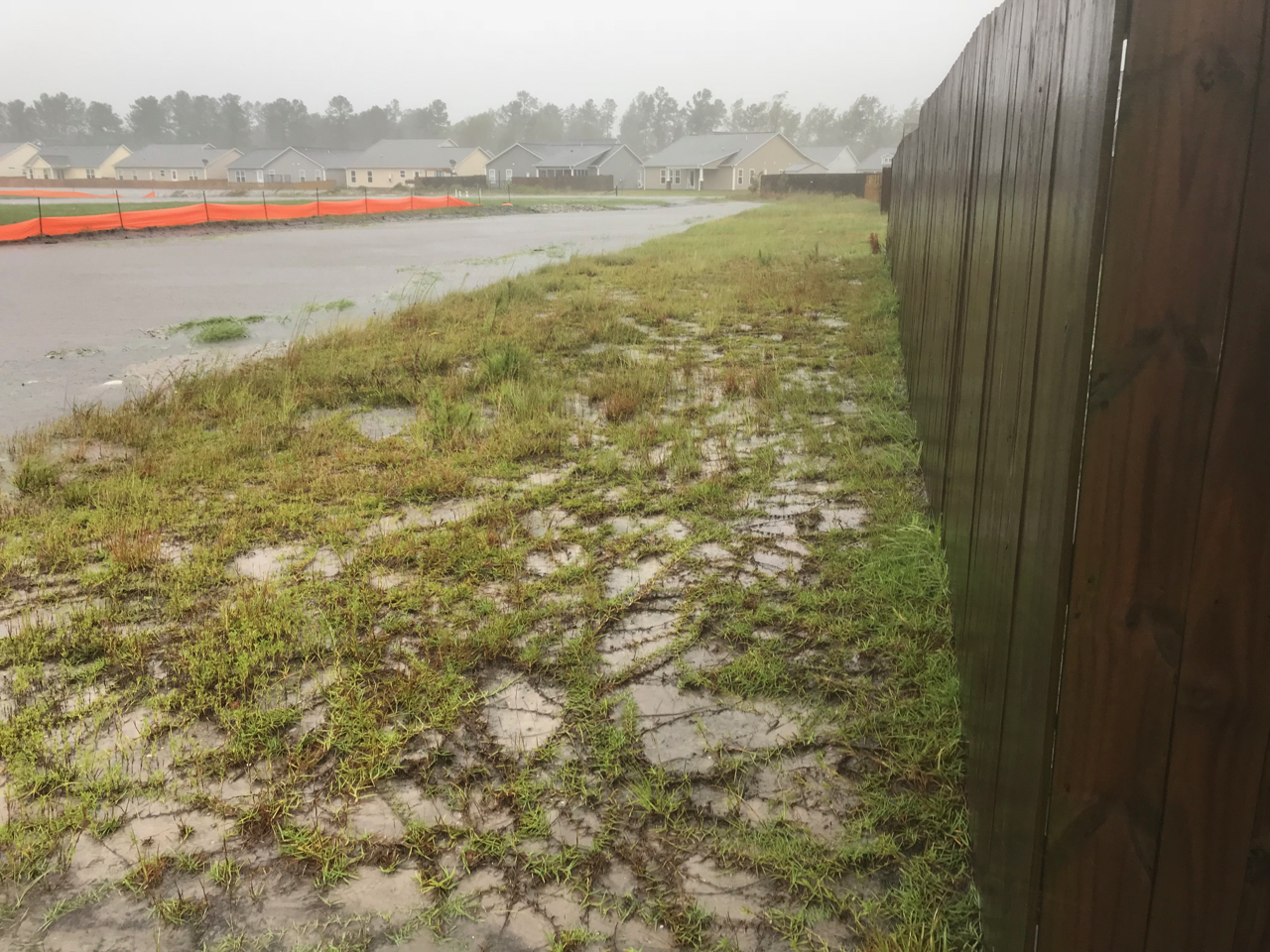 WOW, again!  The 10 feet or so to the fence is all I have left then there is probably a 1′ to 2′ elevation gain to my back door another 40 or 50′ away.  As of 2 AM there is no water in the back yard.  Some other streets do have standing water up to people’s doors and while the water isn’t cresting over yet, when people drive by it creates a wake which will cause water to penetrate the homes.  Ugly situation.

So what’s next?  I’m likely trapped here for a few days as it is supposed to rain all day today again with some rain being heavy.  Even if I could get out nothing is open probably.  The City of New Bern is flooded on a colossal, and epic level.  Downtown and everything along the rivers is just one gigantic flooded mess.   Although the hurricane didn’t strike us directly, there were hurricane force winds here and we were in the NE quadrant of the storm.  We got all the rain.  Some places got more than 20″ of rain in two days.  FLOODING.

To survive until the power comes back on I will likely pull my Rockwood A122 camper out of the garage and set it up.  NOTE:  The pic below obviously was taken during a non-hurricane day.  The A frame, pop-up has 26 gallons of water on board and has 2-LP bottles that are full.  Open all the Windows, and turn on the vent fan on the roof which keeps things nice and cool, and I can live off the on board 12V battery for a while before it needs a charge.  And of course I can cook and of course I have my generator still but if I run that big generator, I’m living in the house. 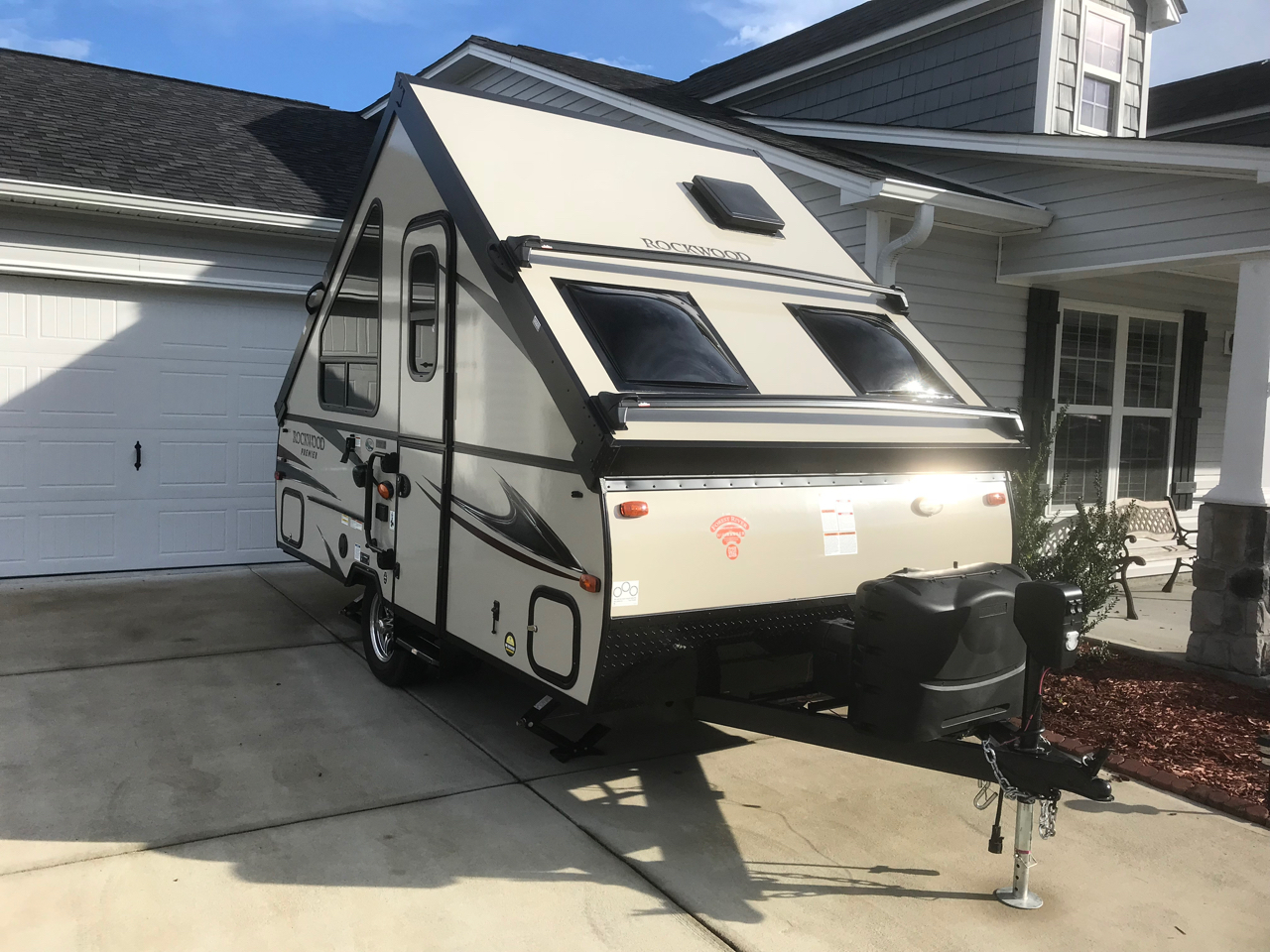 PREPARED!  While I have lots of frozen meat and rice and canned foods I also have a few buckets of those Augason Farms 30 day emergency food kits.  I think it is worth ANYONE’S time and money to pick up a couple of those for just such an occasion.  I’ve yet to break into it yet though but it’s there.  All you need is hot water for them (or cold water for the cereals).  I also have dried milk, peanut butter and jelly, and I made a couple of loafs of bread before this started.

I don’t think you could call me a “Prepper” because some of those guys are nuts, however there is NOTHING WRONG WITH BEING PREPARED.  If you live in a hurricane zone then by golly you should have enough supplies and a plan worthy of getting through the hurricane.

The internet went out the first day, the Emergency NOAA National Weather Service radio transmission went down also.   The good news is I have a big TV antenna in my attic and I have live Over The Air broadcast TV.  A lot of channels as well.  I also have multiple AM/FM/Short wave radios and I also have a Uniden SDS100 Police Scanner. 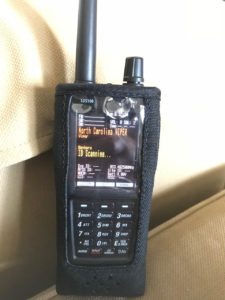 I had been knocking myself for spending the money on that thing however it has now entered into the “MONEY WELL SPENT” category.  When the SHTF………It’s nice to know what’s going on.  It has been INVALUABLE!

So that’s it for now.  I’m still standing and still have resources to continue.  I encourage all others to up their preparedness game just a bit.

While I could pick my preparations to pieces the simple fact is this.  I was pretty darn prepared.  I have TV, radio, police scanner.  Internet through my phone and cellular iPad.  That’s another luxury that sometimes you ask yourself, ”Do I really need unlimited internet and a cellular iPad?”  The answer to that question is emphatically “YES”!

I also have hot and cold running water still.  Showering is no issue.   I have a freezer full of frozen meat, a refrigerator full of food, snacks, and cases of water.  I even manage to keep the crazy away by exercising on my elliptical and when I do I run the AC in the house off the generator to keep from sweating to death.  It’s MUGGY here.  It is Georgia Southern Belle “I got the vapors” MUGGY.

So old John is doing okay.  And while I seldom am, I’m kinda proud of old John right about now!