If you were to do an exhaustive search online regarding the subject of Swiss Army Knives (SAK) you would be prone to find lots of historical and technical details and there is a plethora of “What Is The Best Swiss Army Knife?” web lists out there.  If you are a collector, or in my case a new collector, all of that information is GREAT!  But it doesn’t explain  WHY there is a connection between a boy or man and his pocketknife.

First and foremost, it is a tool which grants you independence.  I got my first knife (that I can remember) when I joined the Cub Scouts probably around 8 or 10 years old and in fact it is still in a drawer at my parents house.   Man oh man was I proud of that knife.  I’m sure as a Cub Scout I used it for whittling or to sharpen sticks when playing in the woods or maybe even used the screwdriver on my bicycle to tighten things up.

I truly get the emotional connection when a young boy gets a hardened steel knife. It’s DANGEROUS and by golly you were entrusted to operate it responsibly, and to use it as a TOOL and a LIFE SAVING DEVICE as any good scout is taught.  You are MAN ENOUGH to have something hazardous, maybe for the first time ever.

Why does a grown man maintain that connection? As I grew up I always had a pocketknife and it was almost always a Victorinox Swiss Army Knife…….but here’s the stone cold reality……….I never used them THAT MUCH. Oh I used them but I somehow feel better just knowing it is there.  And to me they are not only useful but they are works of art somehow, on some level. 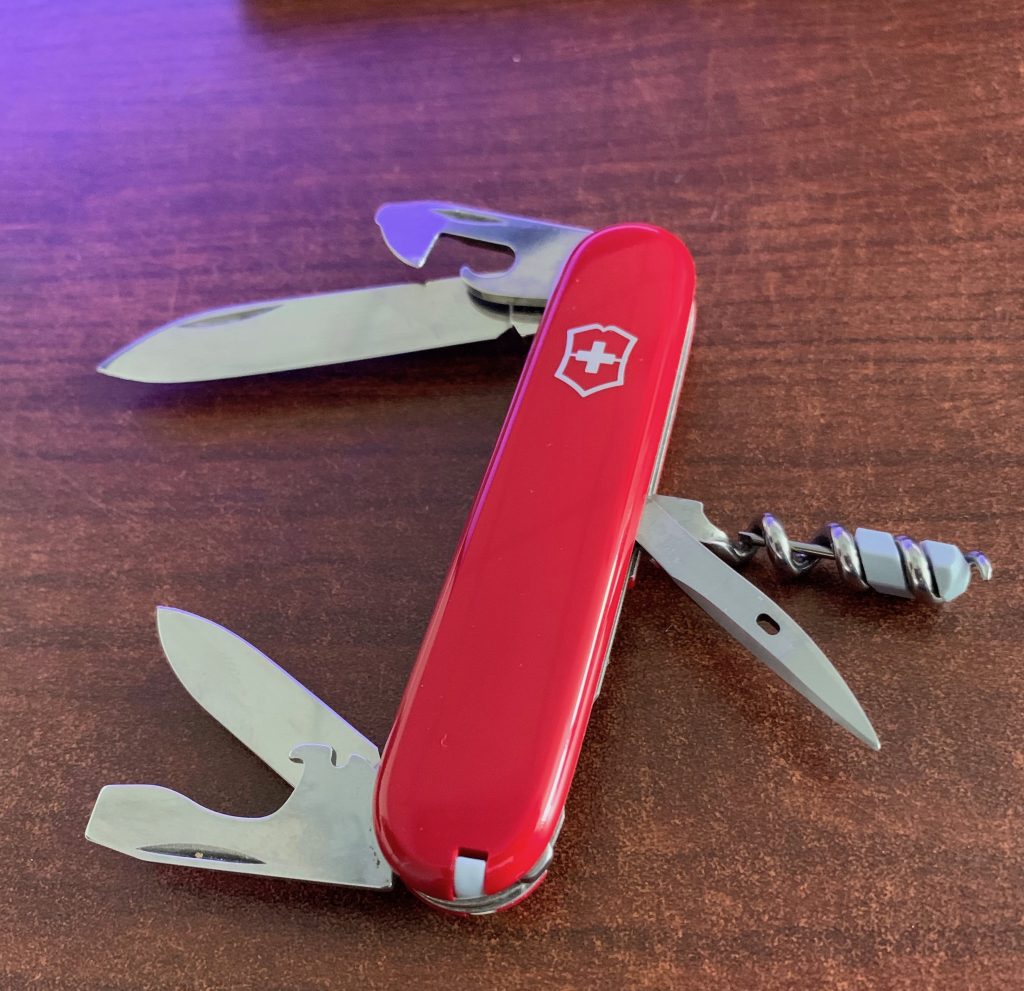 I suppose I carried a knife similar to that in the picture above and then one day I woke up and I realized I wasn’t dirt poor anymore and I went out and bought me a SwissChamp which I still have. 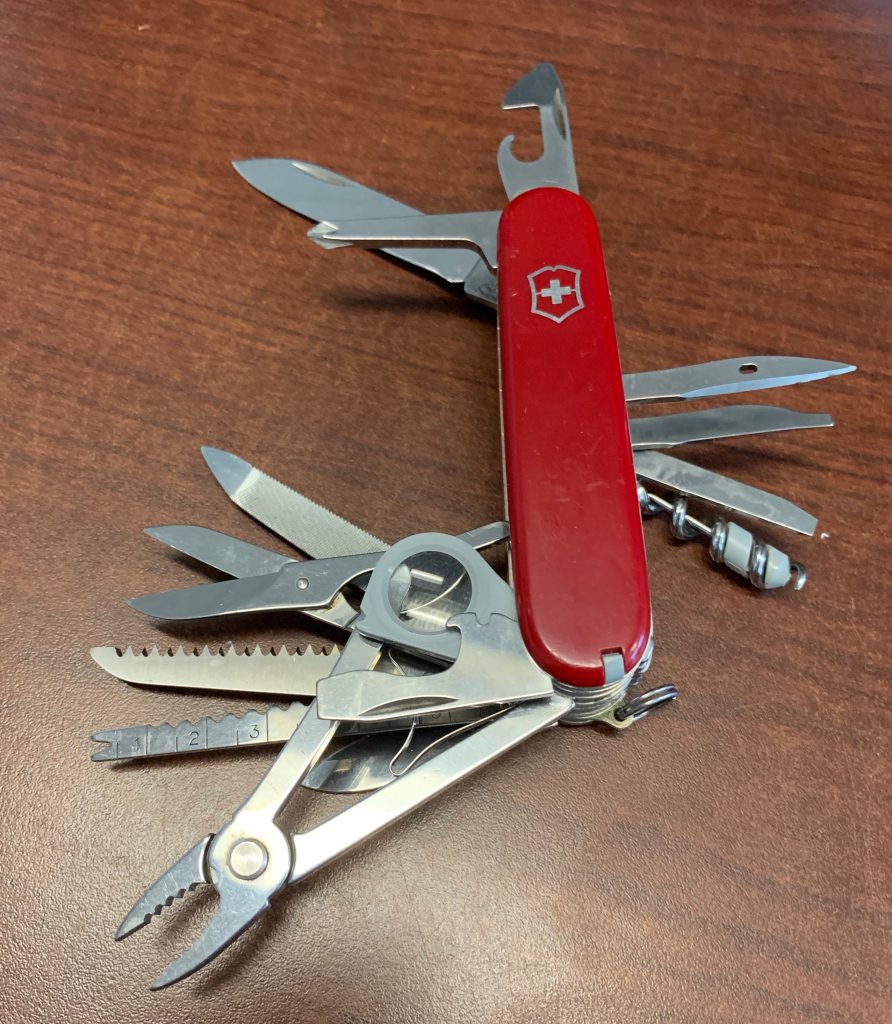 The Swiss Champ is truly a functional work of art.  However as we get older we get more practical and we like to keep our pockets a little less full.  Things like the SwissChamp fare better in the glove box of the truck than in my already nearly full pocket.  I kind of find myself gravitating back to that basic pocketknife and also I get a lot less mad if I drop and scratch a $10 pocketknife compared to my much more expensive SwissChamp.

Back to the usefulness of the knife………If you are at home and you need a screwdriver and you grab your Swiss Army Knife………..you’re probably doing it wrong.  Just go grab a screwdriver.  The pocket multi-tool is designed to be used when you are out and about and no one has a tool and there is no reason for anyone to have a tool. 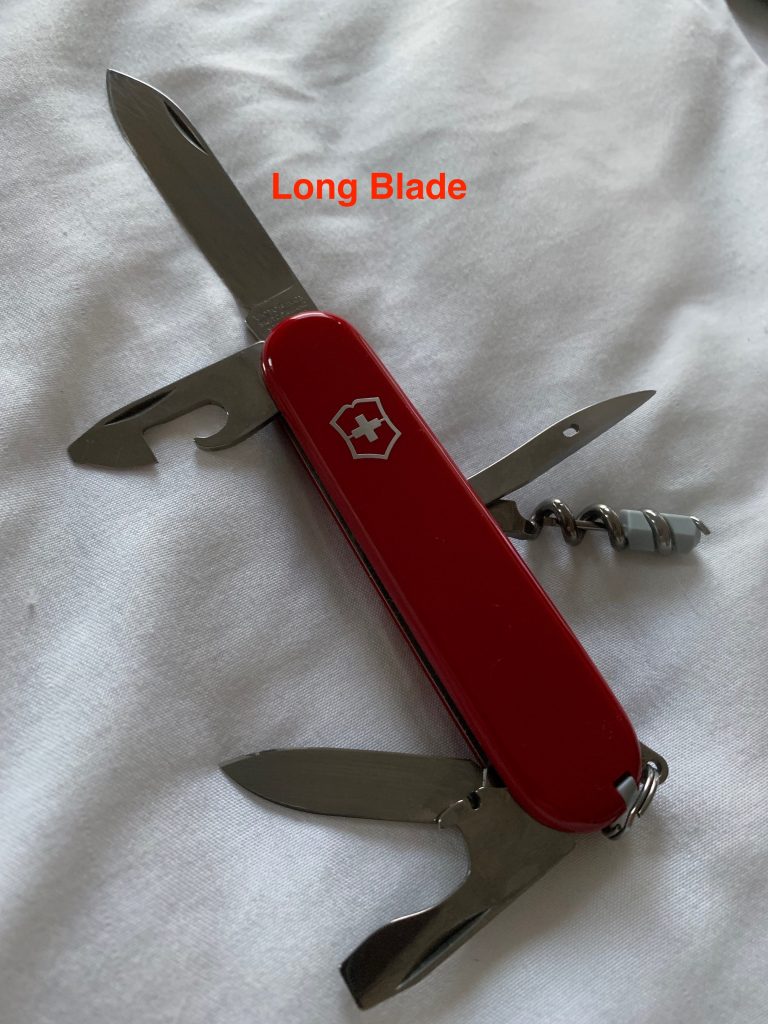 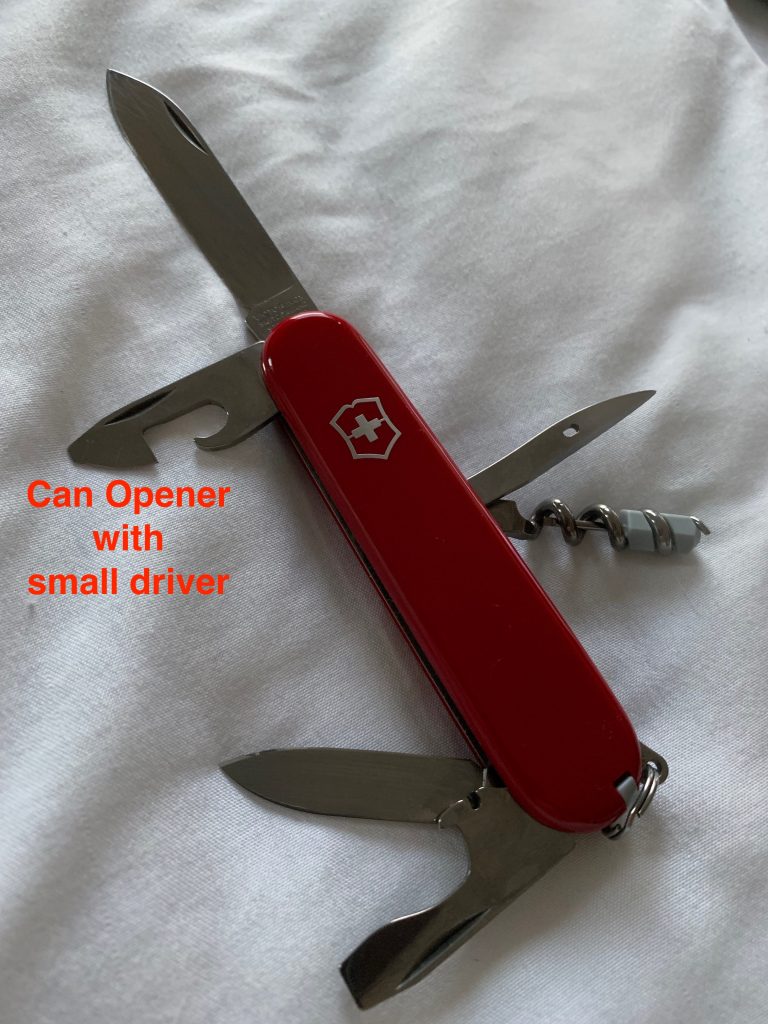 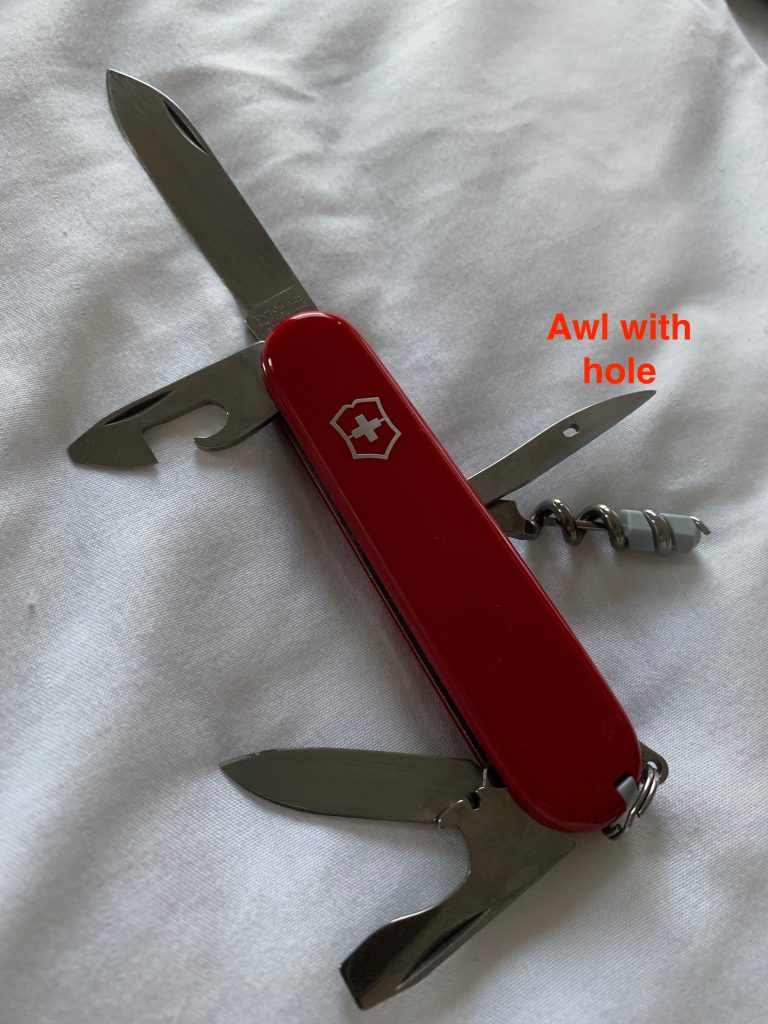 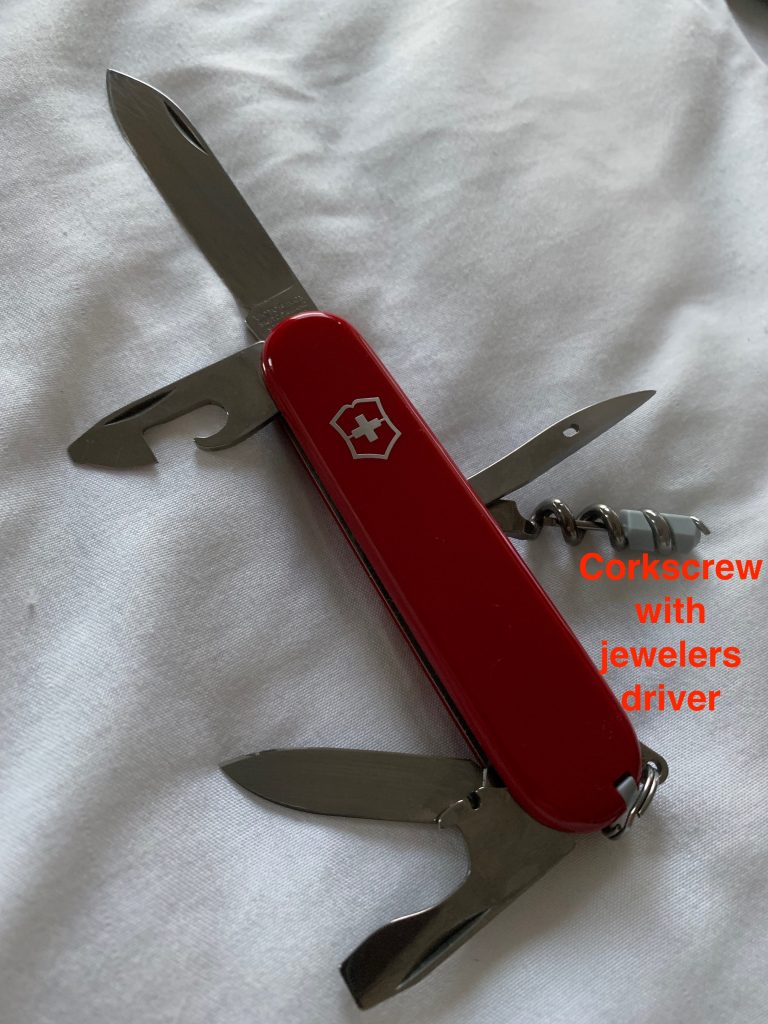 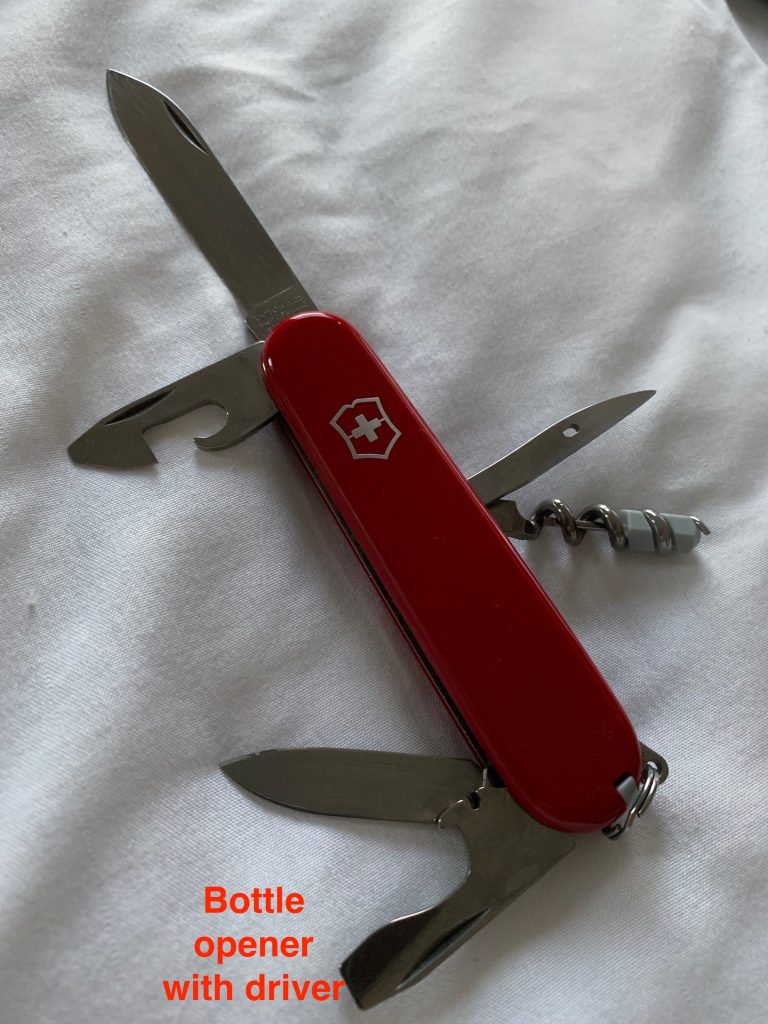 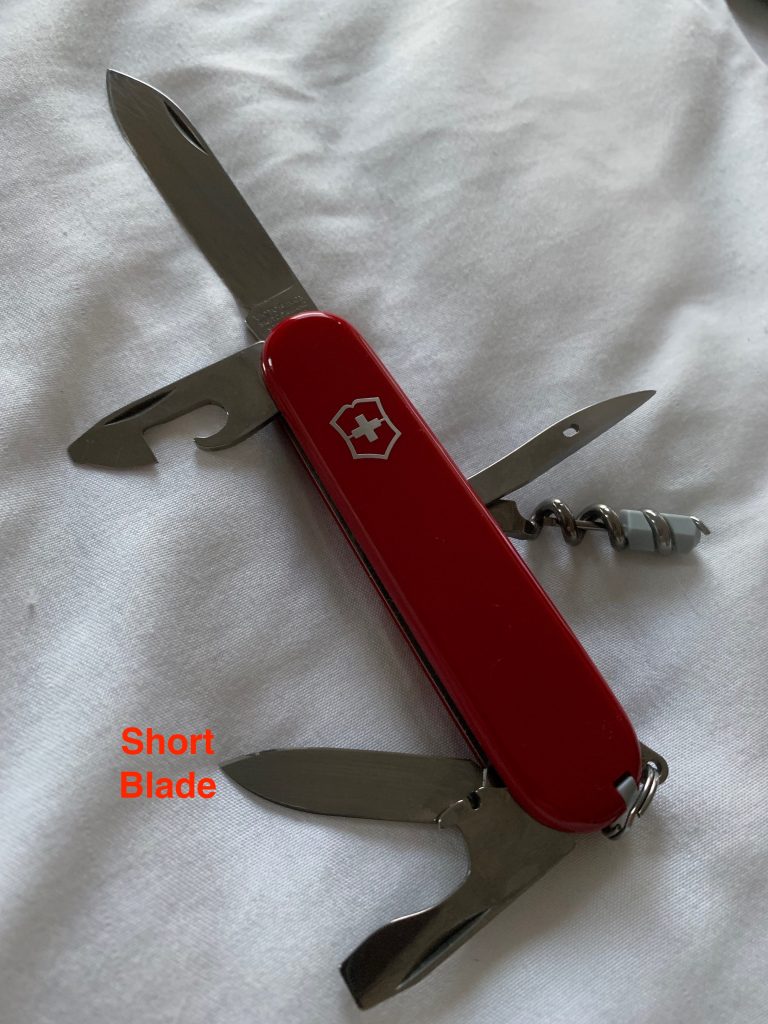 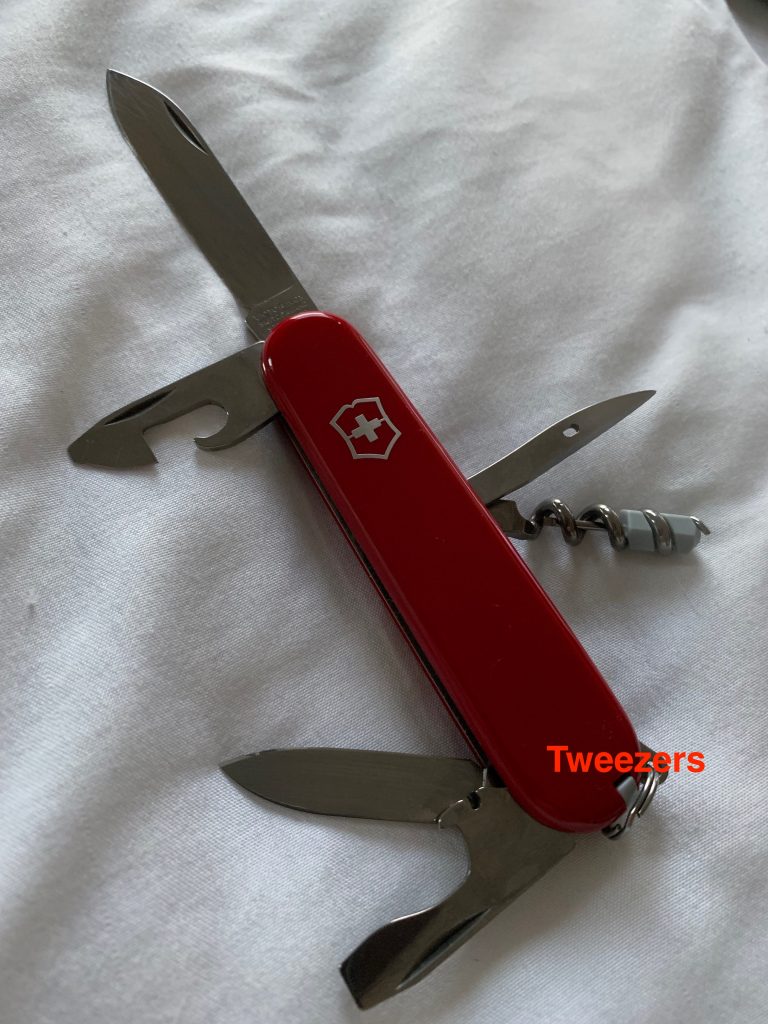 Right after these, I’m not sure what more you really need to carry around on a daily basis.  Don’t get me wrong.  I love the small scissors that come on some models. 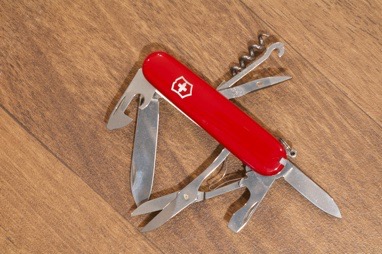 Pliers are cool, as is the hook on some.  I find it odd that more models of SAK’s do NOT have Phillips screwdrivers on them, however the end of the can opener blade fits an awful lot of Phillips head slots.  Perhaps it is I with the problem.

There’s no doubt that I’m emotionally connected to my pocketknives.  As I said before, they are functional works of art.  And they are INGENIOUS.  Almost makes you want to giggle when you say that.  Having a Swiss Army Knife on you at the right time makes you the momentary hero as well.   From simply snipping an unwanted thread off of some clothing to tightening the clamp on the water hose ………….. It’s all about having the tool and knowing how to use it and BEING SMART ENOUGH TO HAVE IT IN THE FIRST PLACE!

I always knew this would happen, but it finally did.  My lovely woman came over for dinner and brought a bottle of wine.  She couldn’t find a corkscrew.  Honey, I have at least TEN of them here. That cork was no match for my manly Swiss Army Knife.  Leave it to those Europeans to know the importance of having a corkscrew while you’re running around killing people.

And lastly on some level I enjoy finding old knives and breathing a little life back into them.  It isn’t very hard or very expensive to breath some new life into an old knife.  Old knives can be had EVERYWHERE and if you are patient you can get them for $5 or less on eBay.  Clean, oil, sharpen and if you’re really fancy…….put some new clothes (scales) on them.  I got some Climber models on eBay for just over $6 each and made them brand new again.

Taking an old knife and restoring it also makes me connect on some level.  The knife that was destined to get tossed out in the trash is made new again, possibly for some young boy to have as his first someday and then he can relive the feelings of RESPONSIBILITY entrusted to him..  I think maybe this is why I have so much fun cleaning up old knives. 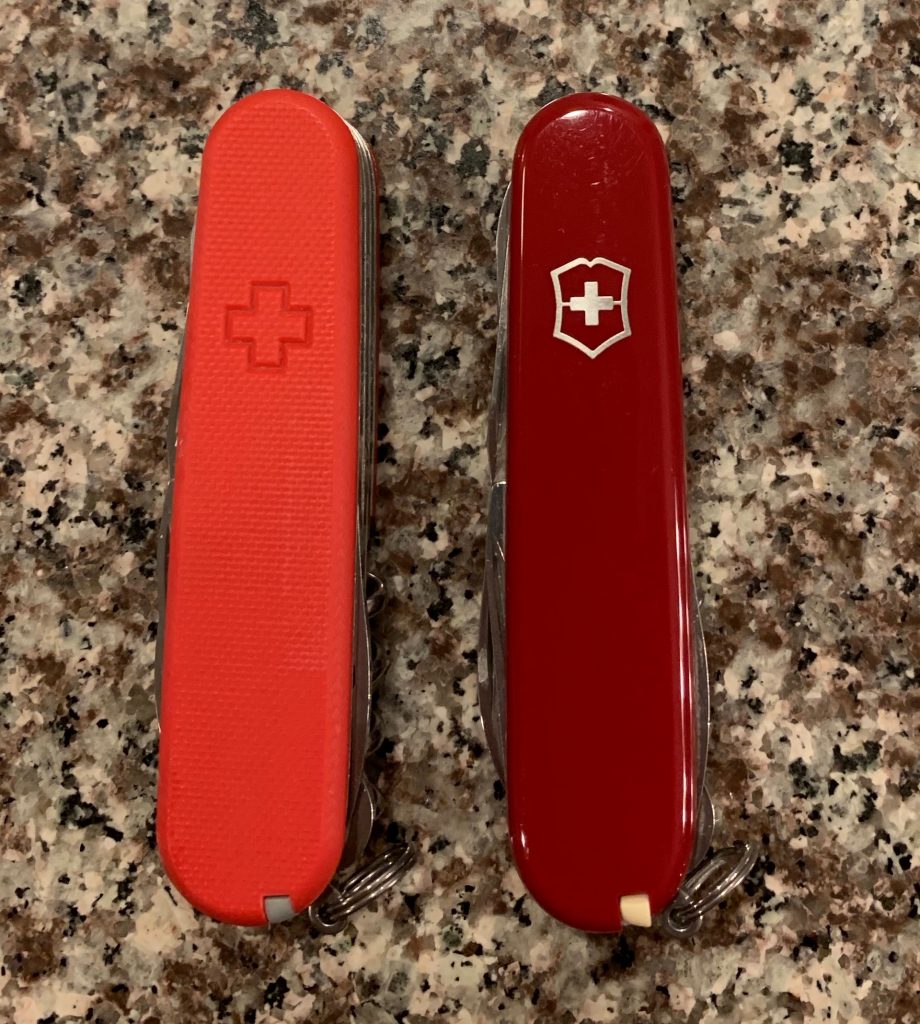 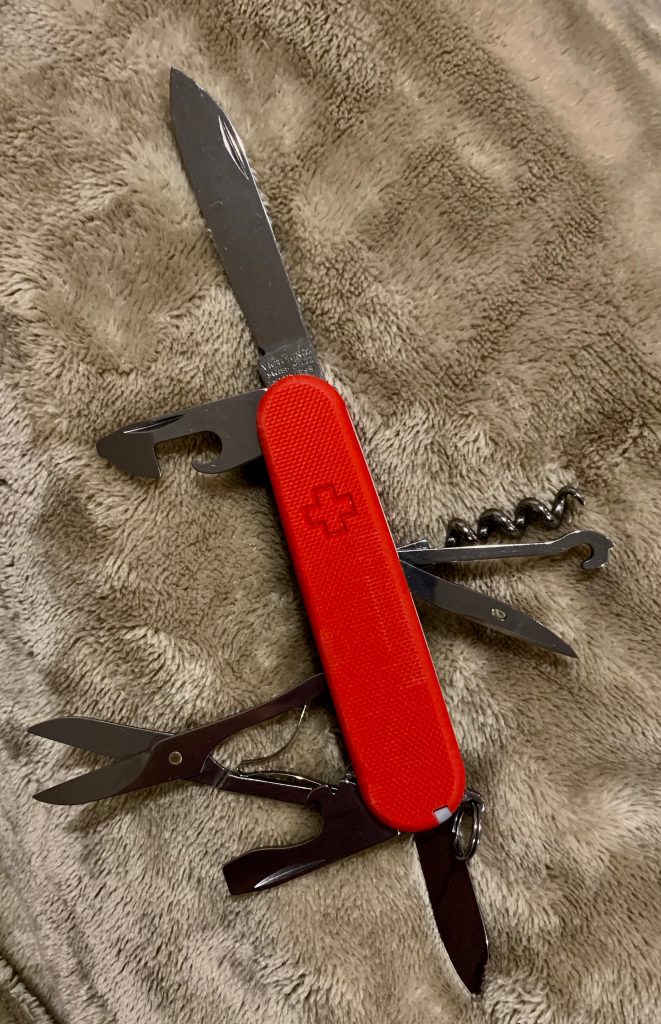 Art. Emotion. Preparation.  That’s what it is.

If you don’t believe me turn on your imagination machine and back your clock up until you were say, I dunno, 10 years old.  Then look at one of those knives in any picture above and imagine how you’d feel if Dad told you it was yours but that it was a big responsibility.