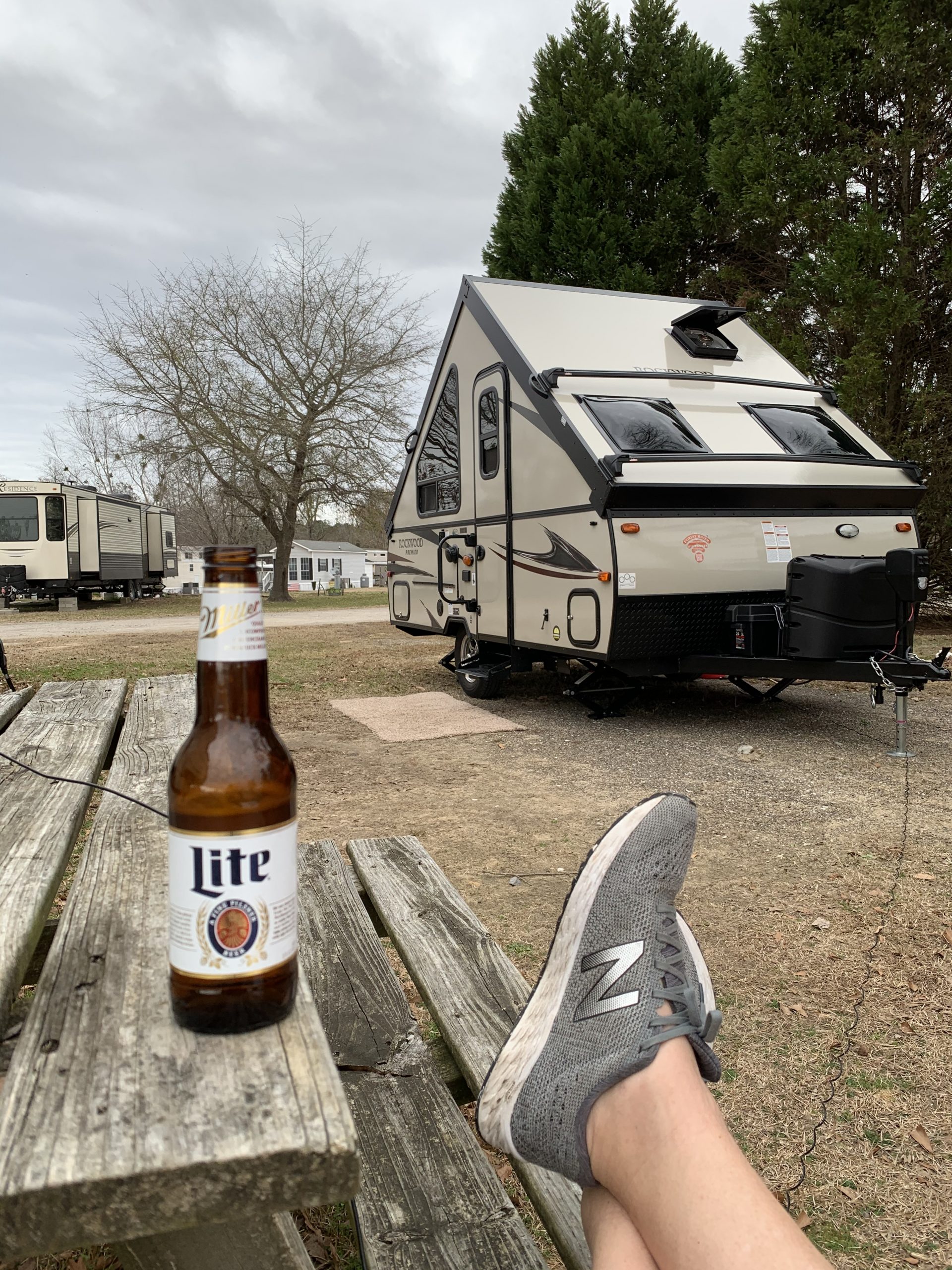 A couple of years ago my daughter left for school and I found myself for the first time maybe in my adult life all alone.  I knew I had to shake things up in my life so I went and bought a camper.  I never camped, never thought about camping, and I’m still not sure what compelled me to run to the bank and borrow a bunch of money to buy a camper.

I’m two years into this thing and I’ve learned a lot about camping and figured I’d scratch down my thoughts in the hopes it helps some other middle aged crazy guy.

First of all I have to state that my camper choices were limited by one gigantic factor.  It had to fit in the garage.  I live in an HOA that doesn’t allow campers in the driveway, street or even in your own fenced backyard.   I’m essentially a rule follower so that was my major criteria for selection.   There are not many campers that fit under an 8′ garage door.  Buying a bigger camper and storing it at a pay lot were out of the question as well.  At that time the budget was quite a bit tighter than it is now.   So it had to fit in the garage.  That was that.

It became readily apparent that an A Frame camper was going to be my best choice.  There were essentially Aliners and Rockwood A122’s.  A local place a couple of hours away actually had the A122’s in stock so it was really a no-brainer.   As soon as I saw it, and got to climb inside I knew it was for me.

But let’s be clear.  I wanted a bigger camper.  Not a lot bigger, but bigger.

So I go camping…………and I fell in love with the lifestyle.  However I realized a few limitations.

Now there are also some major advantages.

And right up to this point…………IT IS PERFECT.  However, me being me I now have decided I want to go off grid and go where there is no power or water.    The water is no problem because I have a 26 gallon onboard tank.  The problem is power. I have to survive with what power the camper battery can provide me. This leads me to my first upgrade.

Adding a 2nd battery and wiring it in parallel. 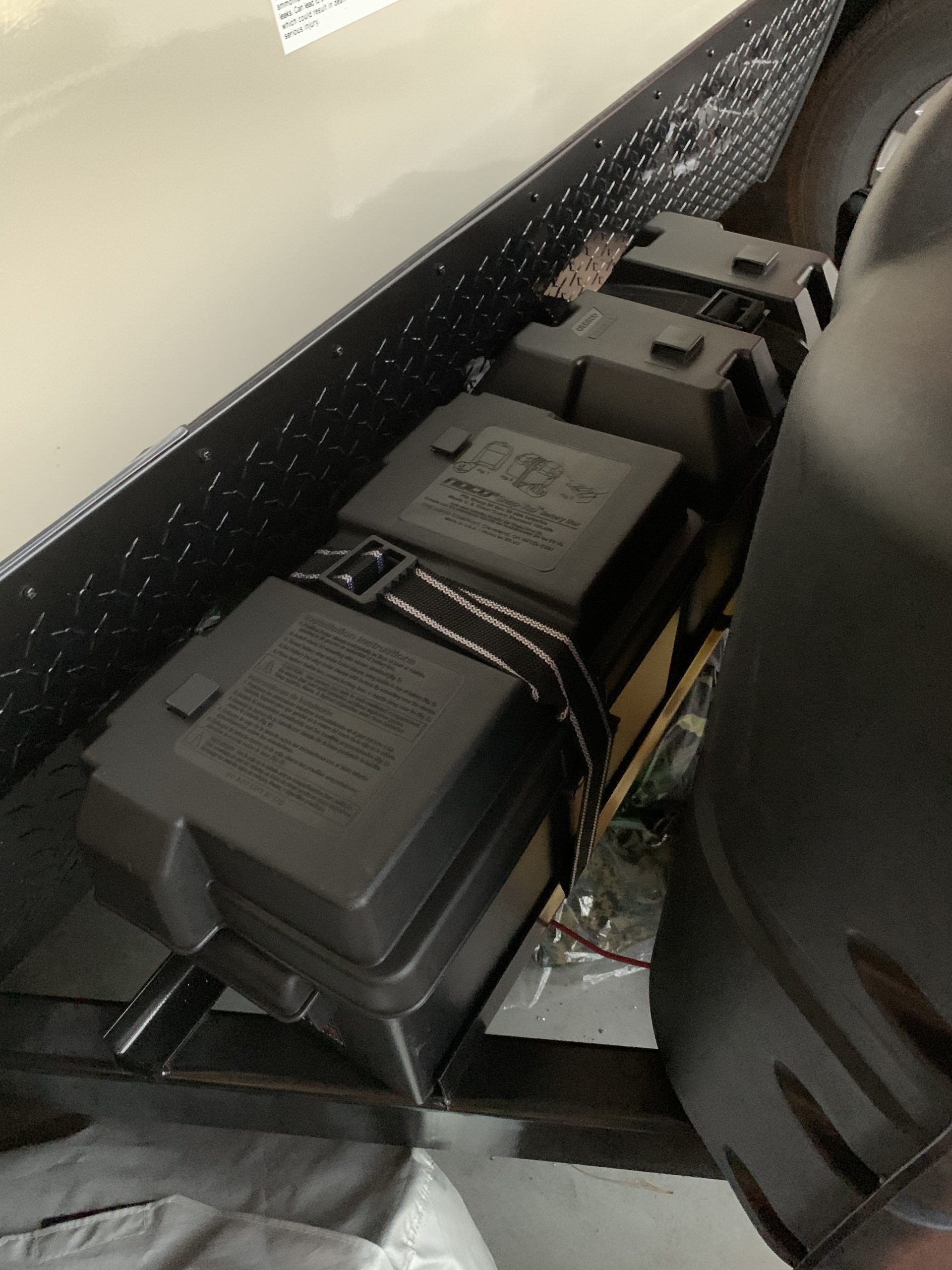 Addition of 2nd Battery to Rockwood A122

Wiring in parallel maintains the same 12 volts but it doubles the usable battery capacity meaning your stuff will stay working longer.   The battery WILL NOT run the air conditioner. If you want to do that you need to bring in at least a 2kW generator.  I have a Honda EU2000i Companion that will fill that need.   But you don’t go in the woods to hear a gas powered generator running.  But when you are done being outside for the day having AC sure is nice.

On strictly battery power I can run the lights, the water pump, the propane ignitor to light the hot water heater (it needs 12 volts), the front jack, and the smoke detector and propane gas detector.  On propane I can run the refrigerator and the furnace.

So I’m kind of limited to camping in milder temperatures.

So now let’s talk about Solar.  If I can top the batteries off daily I can stay out a longer period of time.  It isn’t horribly expensive but it does cost $250 or so to get a Renogy suitcase solar panel that clips directly to the battery posts. 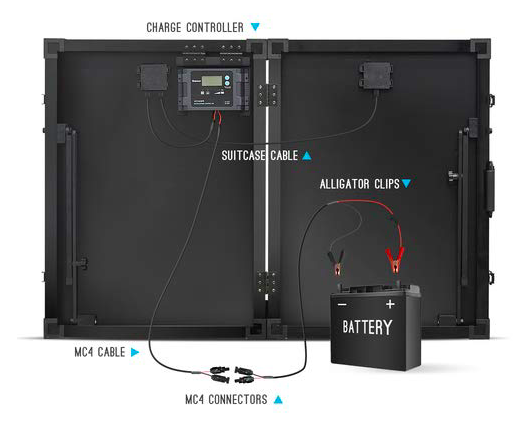 When I bought the camper they told me it was solar ready.  I assumed my bargain camper was NOT solar ready however when I was climbing around under the camper yesterday trying to figure out how to install a better solar system I found a solar connector BURIED on the bottom of the frame beneath the diamond plate that protects the camper from rocks while being towed. 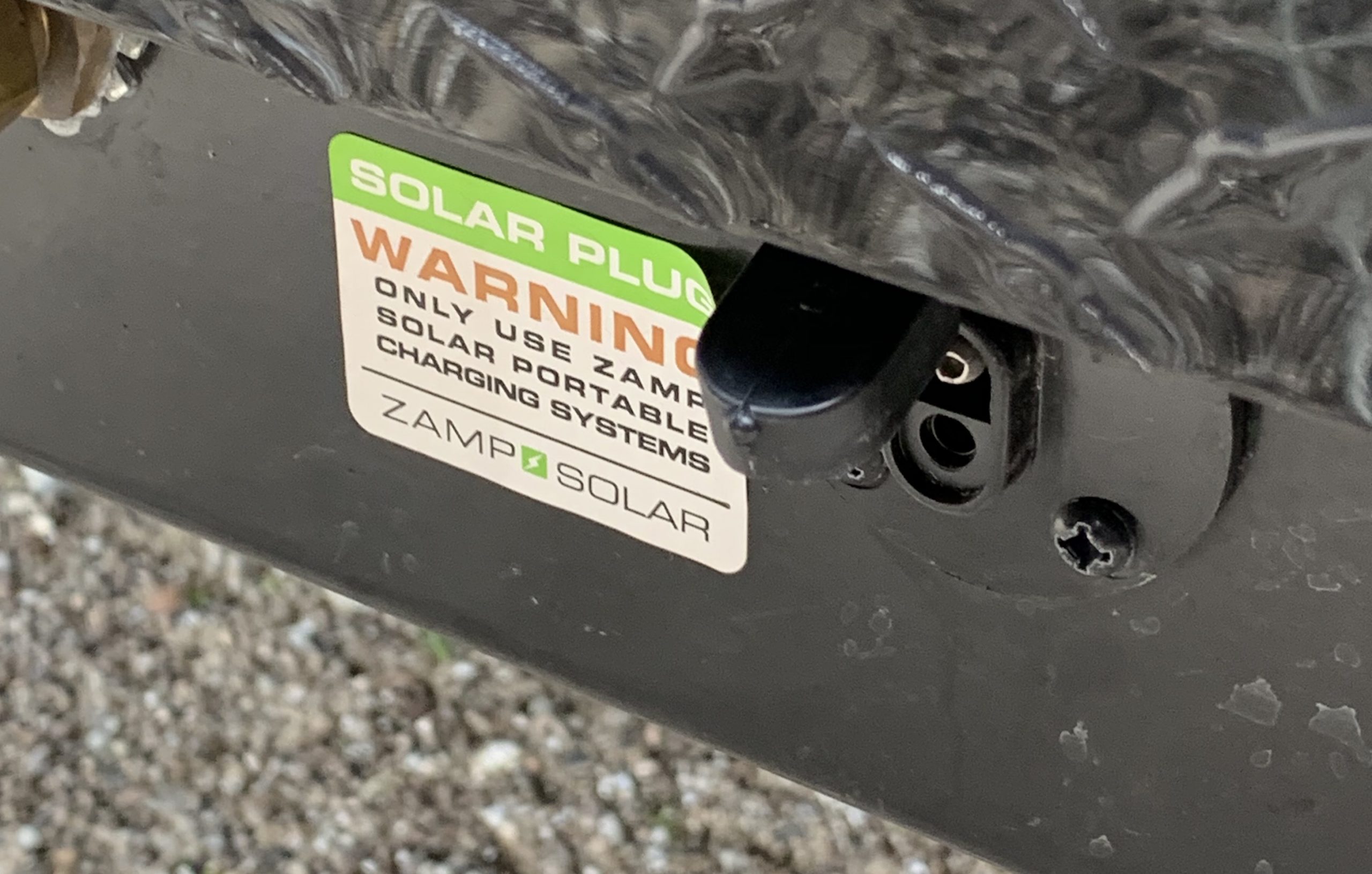 Here’s where it gets interesting.  The dealers say “Solar Ready” but all it is is a plug with the hot wire going to the battery and the black wire grounded to the trailer frame.   Me clamping the suitcase solar kit directly to the battery terminals is THE SAME THING.

However comma, if I use that suitcase solar kit I have to take the cover off the battery boxes, both of them, and then the battery is exposed to the elements.   I will build an adapter cable to to go from the solar charge controller on the panel to the SAE solar plug on the camper and then I won’t have to expose the batteries to the environment.  So it seems like a win.

Also when you camp on solar and batteries you have no 120 volt service on the camper (unless you are on generator or shore power).  So the addition of 12 volt camping or automotive gadgets improves your creature comfort level.   (i.e. 12v fan, 12v coffee maker, 12v freezer, etc).

That’s another thing.  I have a refrigerator but no freezer.  There are excellent automotive refrigerators such at the Alpicool 20C, and by changing the settings you can use it as a freezer.  BUT ONLY IF YOU HAVE A 12 VOLT CIGARETTE LIGHTER STYLE POWER PORT.

So I start digging around to see what it would take to add a 12 volt outlet.  That’s when I discover that the Rockwood A122 had a WFCO 8735-P Electrical Distribution Center in it. 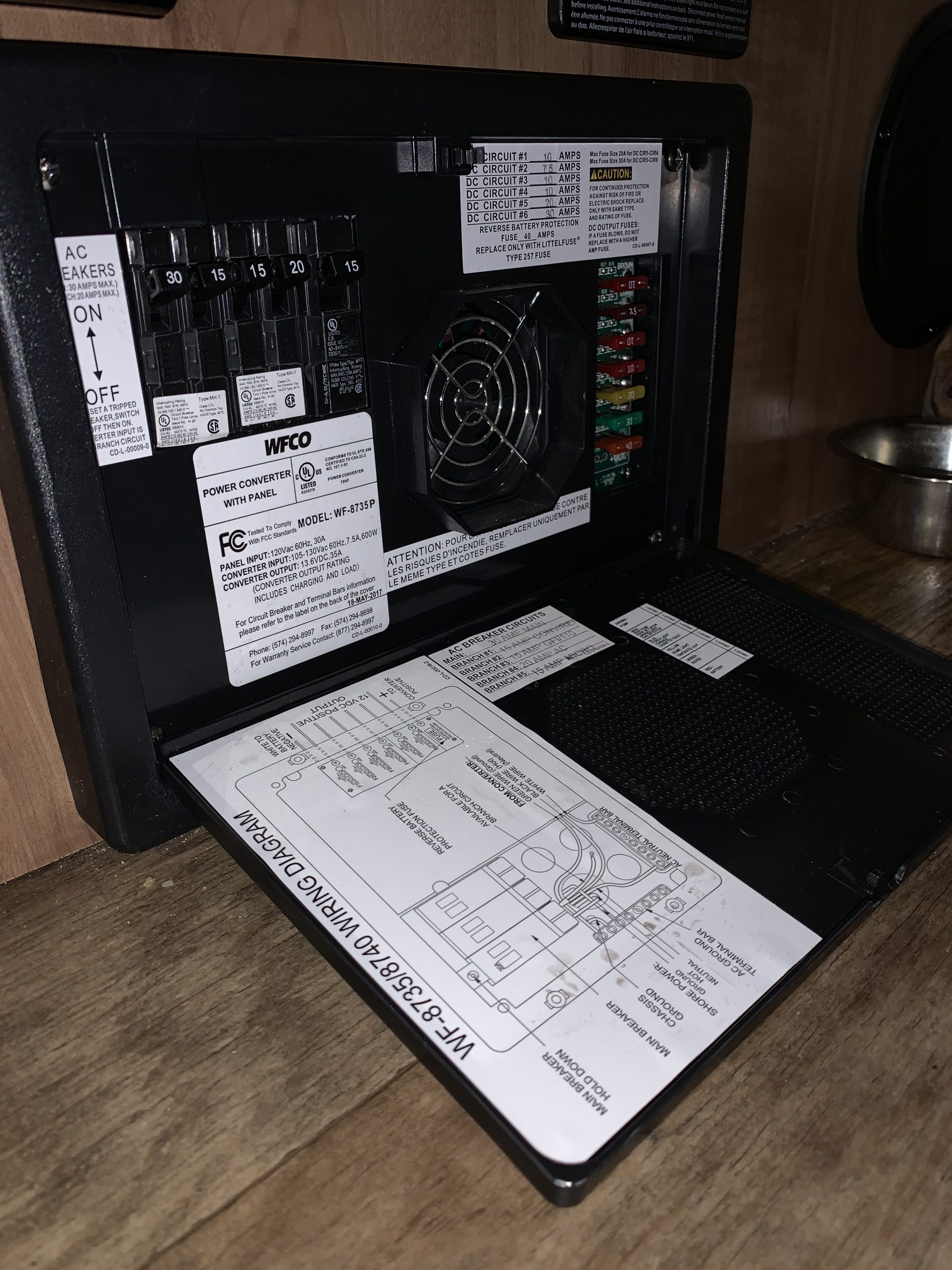 I’m not sure quite how to say this but the WFCO 8735-P is a cheap piece of Chinese shit.   Most distribution panels allow you to remove and replace the converter section (the part that charges the batteries).  The 8735 does not.   The 8735 has only 6 DC inputs and mine has no open circuits remaining.

So if I wanted to add a 12v cigarette lighter power port I have to add it to an existing circuit.  You may see there are 7 fuses but the bottom one is a Reverse Polarity protection fuse.   The other 6 are the DC branch circuits.  Looks like I can splice into the yellow wire on the back of the 8735 and put my cigarette lighter power port on Circuit 4.  It has two LED lights and a 12v exhaust fan on a 10 Amp fuse.  Plenty of overhead for the tiny freezer or some other 12v device. 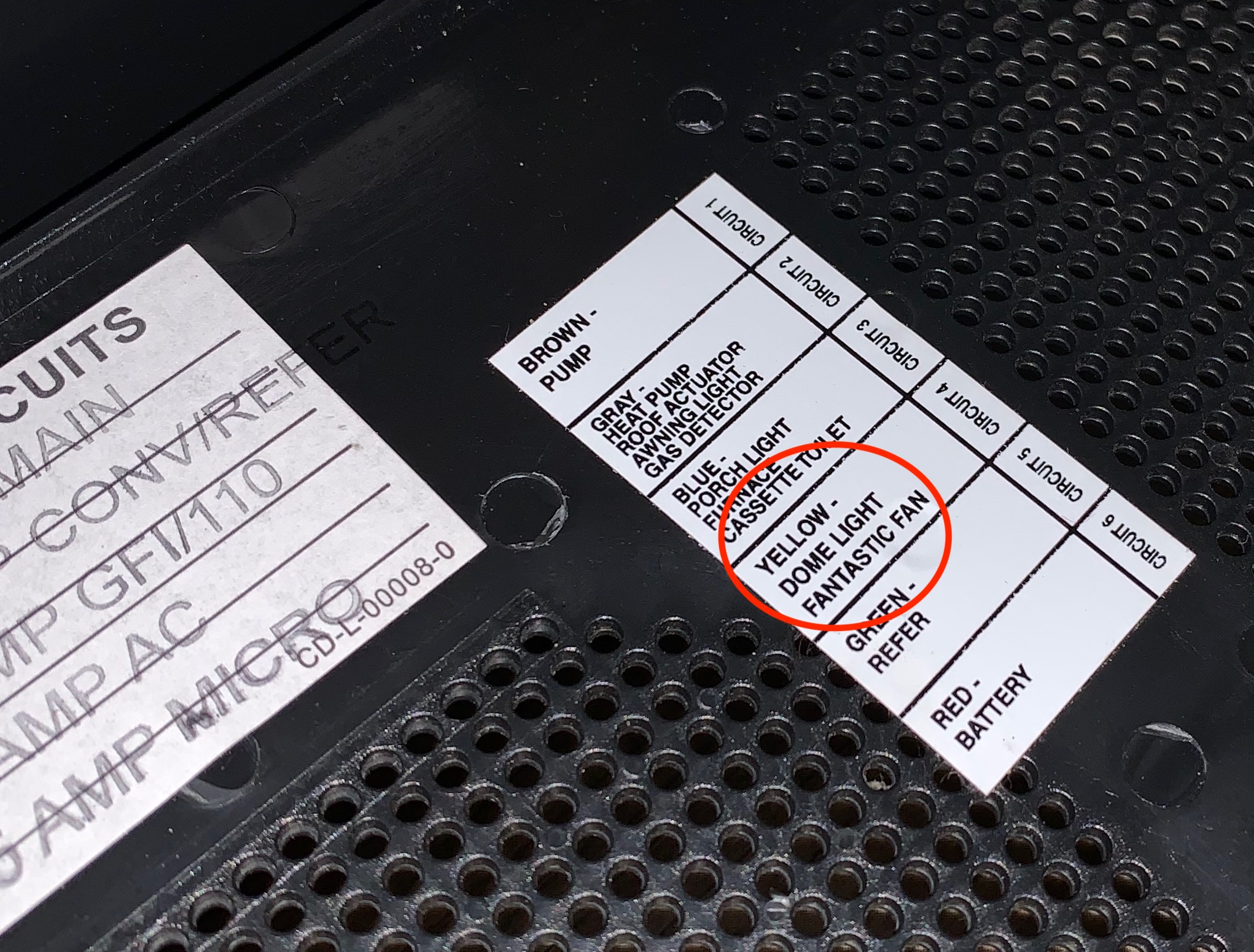 DC Circuits on Rockwood A122 Camper

So I go look for the yellow wire and this is what I find. 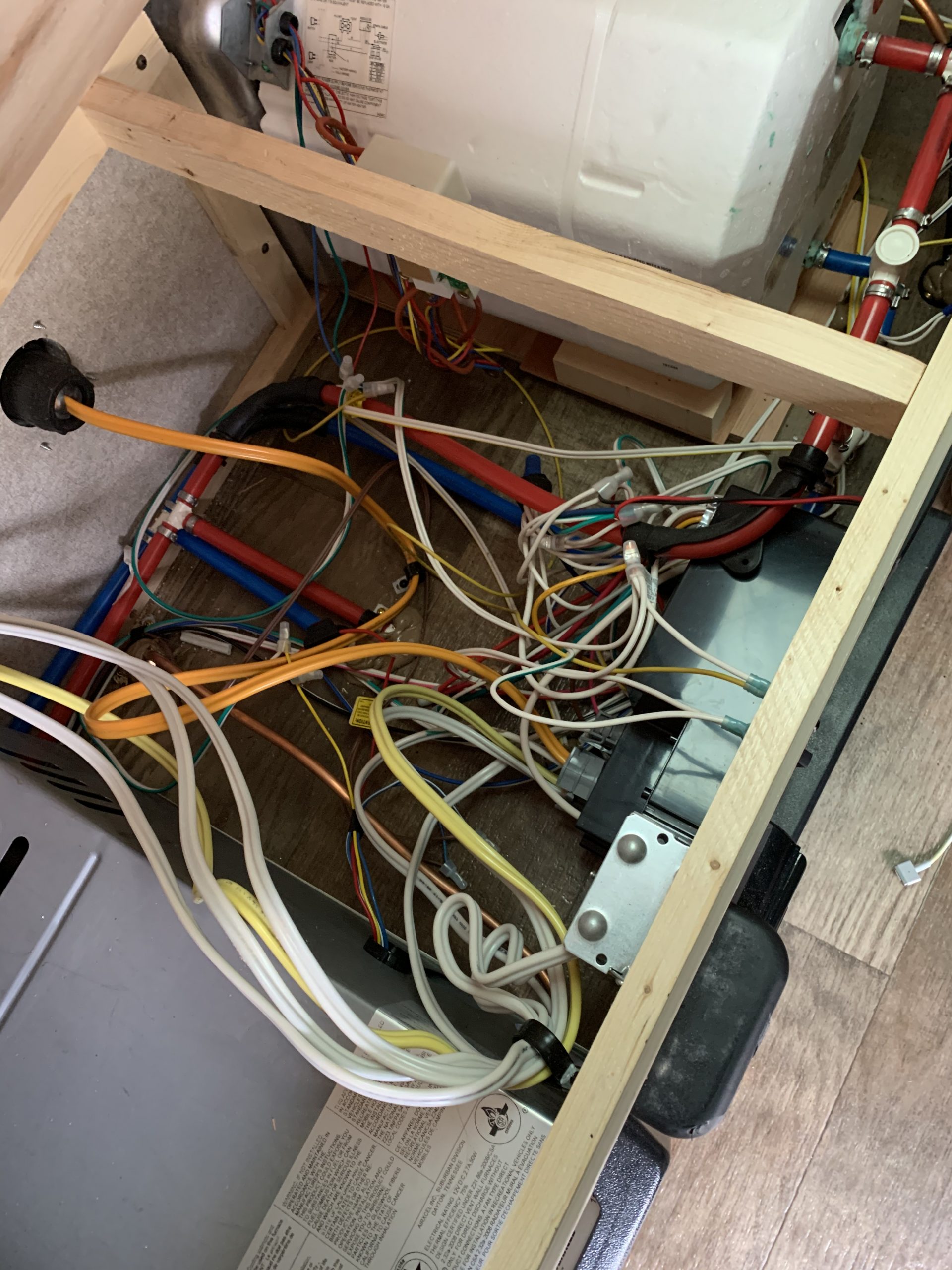 So I did add a 12 volt connector and a 2 port USB charging plug.  This gives me some flexibility to add 12 volt devices for off grid camping.

So lets say I wanted to put in a more respectable power center.  I certainly possess the skills to remove the old one and put a top of the line one in…….well, except for one thing.  THERE’S NO ROOM TO INSTALL IT.  Along the baseboard where it is is surrounded by the furnace, the water heater switch, the carbon monoxide/LP gas detector, an electrical outlet and probably some other stuff.   The space to enlarge the cut out to put a bigger, better system in JUST ISN’T THERE.

There is a drop in replacement called the PD4135 and it does have more DC branch circuits but it also won’t let you upgrade the converter.  You might want to do that if you ever wanted to run Lithium Ion Phosphate batteries which are the bees knees.

So to summarize my situation here:

If I were to exclusively go camping at campgrounds with 30 amp electrical service the Rockwood A122 is suited just fine for that task.  If however I want to boondock camp I’ll require some solar power with the understanding that the Power Center in the camper is basically maxed out with an almost non-existent upgrade path.   You can make it work but NOT EASILY.

“Solar Ready” doesn’t mean shit.   It means there is a plug wired to your battery and oh by the way  IT IS WIRED EXACTLY BACKWARDS.  The polarity on the Zamp SAE style connector is reversed.  Plug your solar panel in reversed and you can damage some stuff.

Don’t get me wrong here in this 2 year review.  I love my camper and I’m writing this from inside my camper and I’m happy as a proverbial clam.   But you are kind of stuck with the electrical system on this camper unless you upgrade the power center.  That will cost $250 or so if you can do the work yourself or it will likely cost you $600 or $700 if you hire an electrician.

I’d also like to add that since I bought the camper my style of camping has evolved somewhat which led me to discover things that I wish I knew before I first bought the camper such as what kind of electrical distribution center was in it and that it couldn’t really be upgraded.  It is my desire to push the envelope and camp in different ways that led me to this place.   That really in no way reflects upon the Rockwood A122.  It reflects upon me growing in camping and wanting more and wanting the best of everything.

As I bought the camper and the couple of years I have been camping at campgrounds it has been AWESOME.  Now I want to try to use it a different way.  But I have to keep this camper because of my original HOA criteria that I keep it in the garage.  That was and is my limiting factor and I’m okay with that.

If you are reading this you may have a passing interest in an A frame camper or just camping in general.  I think it is really important to sit down with your spouse, or whomever you are camping with and figure out what style of camping it is you want to do.  Then look around the camper and ask yourself questions like:

There’s a million questions and the only way you’ll learn what questions to ask is to go out and just camp.  And then you’ll evolve just like I did.

Successful camping for me has been to make a list of what I need and make sure the list is checked off before I shove off.  I’m a ham radio dude so there are a lot of geek radio toys that probably would never make your list.  My list is a little lengthy and not necessarily in a logical order but I’ll share:

Forget one thing on the list and it can spoil the trip.  I’ll give a couple of examples.  Forget your shower shoes and you’re walking around barefoot in the public shower.  That MIGHT not bother you but it would ruin my whole weekend.   Forget the charged drill battery and I’m leveling the camper under Flintstone power.  No fun.