I’ve never been known to buy one of anything.  In fact I’m somewhat obsessive when it comes to research on new toys.  My closet is full of stuff I have bought and tested that didn’t quite measure up to something else.   Here’s a great example, and this is the perfect example for this blog post: 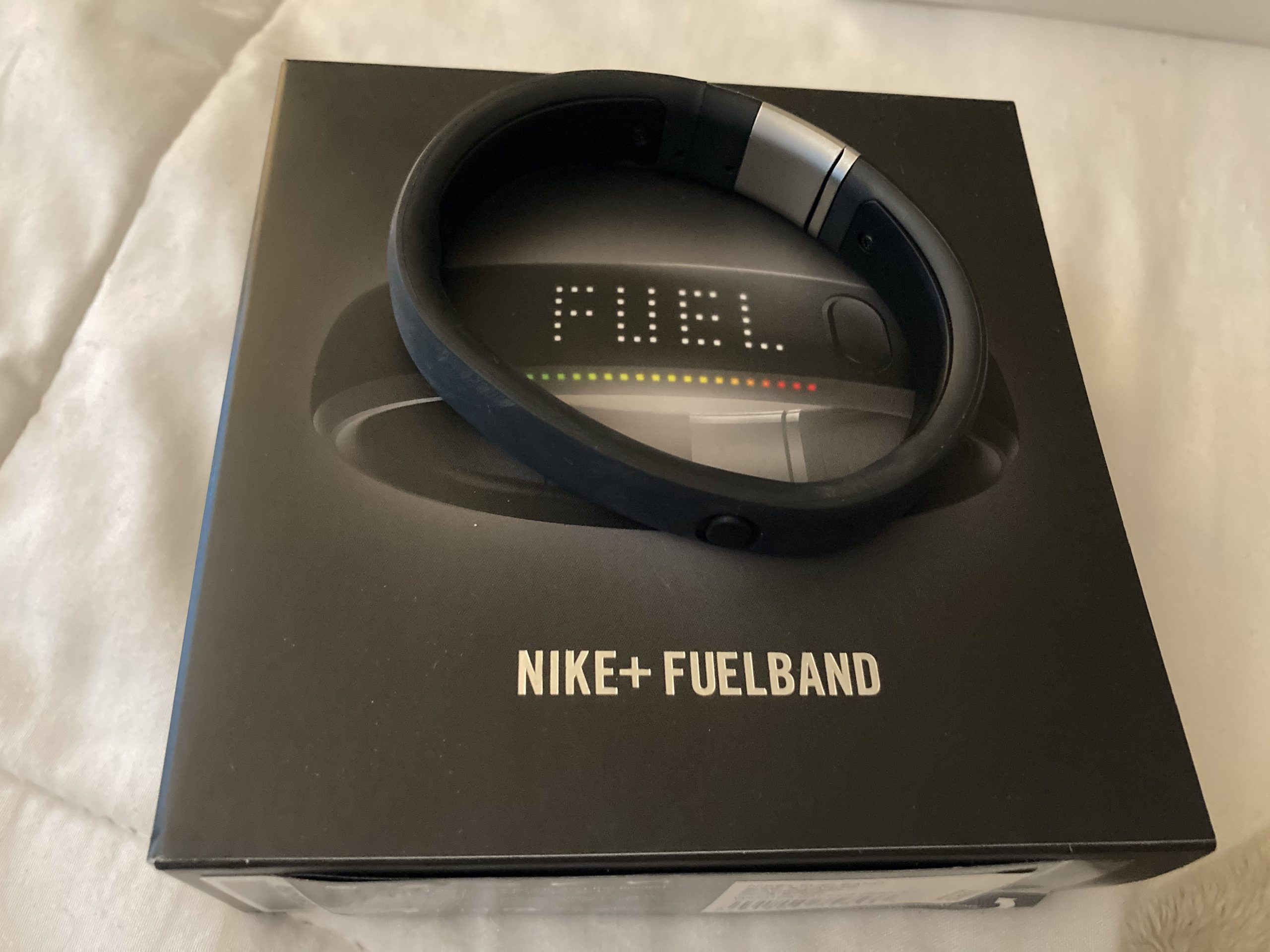 This thing was a Piece ‘O Shit extraordinaire.

In fact this was like the 4th one I had on a single purchase.  The other 3 broke and Nike replaced them and the one in the picture is New Old Stock. I never wore it because………I knew it would break.

They came out in 2012 and already by 2018 Nike has discontinued support and service for the device on their Nike Connect service.  It is now a functioning piece of hardware that is worthless.

If you have one and it still works……….you can’t do anything with the data.  So from cradle to grave the mighty Nike + Fuelband lasted 6 years and was an expensive fitness watch at the time of its release ($150).  To my knowledge it doesn’t export its data to any 3rd party service either. It was proprietary.

This leads me to the largest point of my blog.

BUY SOMETHING THAT HAS LONG TERM SUPPORT OR 3RD PARTY SUPPORT THAT ISN’T TOTALLY PROPRIETARY .

There are dozens upon dozens of fitness trackers out there and they are only as good as their support and service and ability to sync to some tracking server or software.  And what do I mean by that?  Is it a brand new device that only syncs to its own app?  If so, what if it doesn’t catch on?  In a year or so it’ll be worthless.  If it syncs to something like Strava, or Garmin Connect or RubiTrack it might have some longevity.  My Garmin Edge 705 bike computer was made in 2008 and it still syncs to everything.  That’s what I’m talking about.  Garmin is a safe bet.

I think in this day and age of improving tech we think a span of 12 years (2008 – 2020 for the Garmin Edge) isn’t realistic.  Buy something and use it for a couple years and it is obsolete. I beg to differ.  Unless we get a new GPS system or you get a new, and improved heart, these devices are viable for YEARS.  My Edge 705 still maps fine.  Somewhere around here I have a heart rate strap for it as well.   SO WHEN YOU BUY A DEVICE, BUY FOR LONGEVITY AND SUPPORT.  Don’t buy the shiny new watch from China that won’t sync with anything.   And do you really want to sync your personal medical data with China anyway?

A good fitness tracker is one that you’ll use.  If I go for a jog do I need a GPS map with data on every aspect that can be monitored?  No.  Of course I don’t.  BUT I FIND IT HIGHLY MOTIVATING TO SEE AND EXAMINE THAT DATA FOR IMPROVEMENT AND TO MONITOR MY HEART RATE ESPECIALLY AT CHALLENGING POINTS DURING THE WORKOUT.  Also I find it very helpful to have exercise data sync seamlessly into my calorie counting software.

Tech excites and motivates me and helps to keep me on track.

I hate to review things that I don’t own and I’ll try to stay away from that.  I currently own a Garmin Edge 705 (bike computer) and a Garmin eTrex 30 (hiking GPS) and a Series 5 Apple Watch (GPS and cellular).  Every one of those devices hit my point above.  They all have great historical long term support (especially Garmin) and the Garmin and Apple device all work with popular 3rd party fitness tracker programs such as Strava and my favorite program, RubiTrack.

NOTE:  While Strava doesn’t actually support my older Garmin’s you can link a Strava account to your Garmin Connect account and the data imports.  That’s kind of on the fringe of my mission statement.  I’m counting on TWO software services to stay alive.  Newer Garmin Devices, however, will work with Strava fine.

In the world of fitness trackers the bigger players are:

There are more but in my mind those are the biggies.  Also I’ll give note to a new tracker that comes in at around $40 that is fairly capable (on paper). 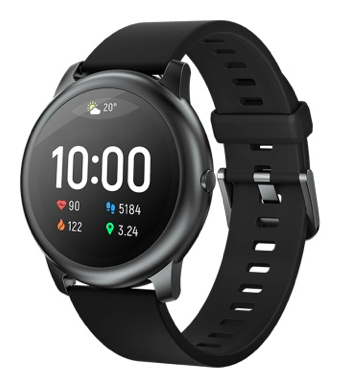 Here’s something interesting.  It is named “Solar” but it isn’t actually solar powered. Surely somebody did that on purpose.

So I am itching, just positively itching to buy several new watches and test them out but I just CANNOT pull the trigger on most of them.  Sure the Chinese watch above but it is just $36.  Every time I eyeball something and get ready to pull the trigger I realize that it is bested by my Series 5 Apple Watch (GPS and cellular).  Here’s what I get:

That Telephone one is the biggee. Get 20 miles from home and crash and burn and I can call someone.  I hate taking a phone with me and I SOMETIMES FORGET TO TAKE A PHONE WITH ME in my haste to get out the door.  I find taking a phone while running to be a pain and I sometimes will jog in the rain.  Not that long ago I fell while running.  Tripped over something.  Was a mile away from home with no phone.  Would have been nice to have had a cellular watch. Also, Fall Down Detection is huge.  I once knew a guy who was hit by a car on a bike and laid in the cold for hours before anyone found him.

Every other watch out there has great fitness keeping ability, no doubt.  The Garmin Fenix 6x is a device that I want very badly but for the telephone integration. 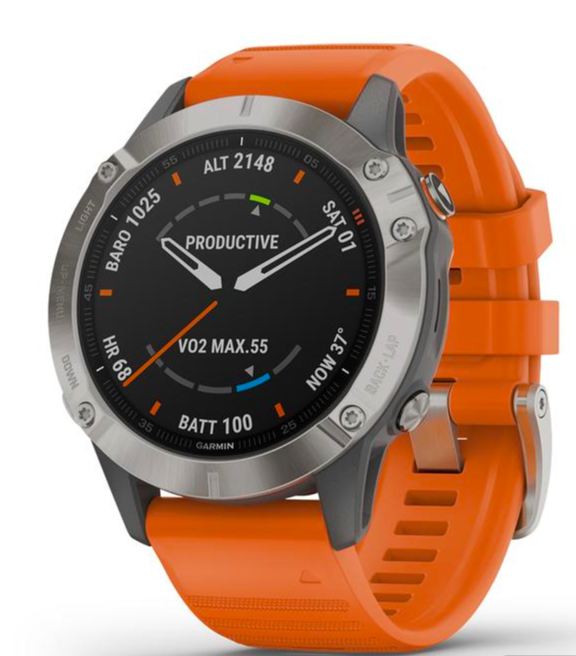 I’d love it for hiking as it comes with Topo maps but I already have a Garmin eTrex hiking GPS.  Yeah, it’s not wearable but I feel like I’m reinventing the wheel with the Fenix.   The Apple Watch does Topo mapping as well with an app called ViewRanger.

Topo maps on ViewRanger will set you back $20 a year and the Apple Watch has SUCH A SMALL SCREEN.  The Fenix would shine here but again I have the eTrex with a decent sized screen.  Also I’m into compasses and paper maps.   Gotta keep the skills sharp.

The Amazfit GTS is another lustful device and it looks almost identical to the Apple Watch.  Again, phone integration is the issue.  Having a cellular device with GPS and heart rate monitor is a tough act to follow.  The day that some of these other companies partner with a cell phone company is the day they’ll beat the functionality and usefulness of the Apple Watch cellular devices. Imagine a Fenix 6x with a cell phone.

Another problem with these devices is the cost.  Who wants to go hammering with a $500 or $700 device on their wrist.   For the love of God someone do what the Chinese are doing and make a badass fitness watch with cellular and GPS for a couple of hundred dollars already. The thought of me banging up my Apple Watch is bothersome.  I’m not sure it’s that rugged.

If for some reason you don’t mind carrying a watch and a phone during whatever workout you do and you need a new watch and you want to track your fitness I strongly recommend the Garmin series of fitness watches.  They have been the name in sports watches for years and many of their devices sync with other platforms.  If Garmin shuts the doors at least the device will still work with 3rd party fitness tracking software (for a while I imagine).

I’ve never used Amazfit but they’d be my runner up although I don’t know how much 3rd party integration they have.  They work with Strava I’m pretty sure.  The price on an Amazfit is more in line with reality as well.

If you don’t want to carry a phone with you when working out, (I don’t) get the Apple Watch cellular Series 5.

No matter what you use or don’t use………just make sure to get off the couch and live your life outdoors sometimes.

Oh, by the way……The best fitness watch at this moment in time, for me, is the Apple Watch Series 5 (GPS and cellular).  Until the others get cell service they fall just a tiny bit short of a true smart fitness watch.