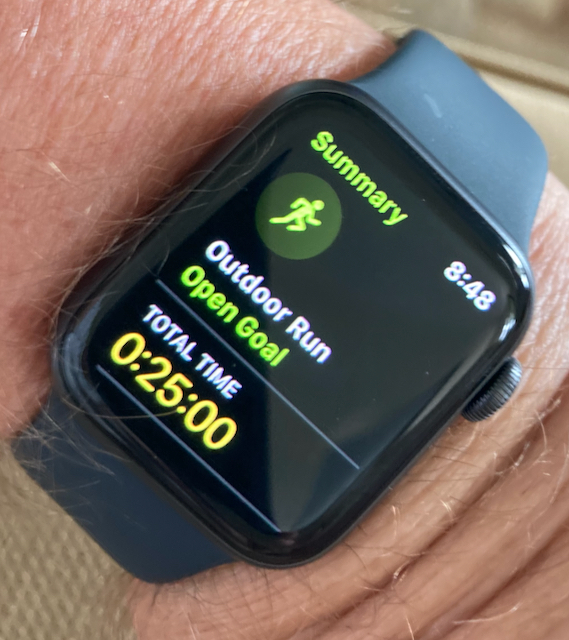 I’m a regular guy and while I’m a tech guy I find that most reviewers over-analyze stuff way too much.  I don’t care how many electrons there is in a pixel 🤪 or how far off sRGB that something displays in chartreuse.

Give me a fitness watch and I’ll tell you if it works or not from a regular guy standpoint.   And while people might tell you something is the greatest technical achievement ever that opinion isn’t worth a hill of beans if it is uncomfortable or gives you a rash when you wear it.

Case in point.  I have some large Casio Mudmaster watches and while I generally LOVE them I absolutely CANNOT strap one up and go jog with it.  It makes me sweat under the band awful and it slips unless it is so tight it cuts off my circulation.  Great watch for camping and hiking and doing woodsy stuff but utter crap while jogging.

So that’s what I’m going for. A review that may contain some technical aspects but while simultaneously explores real world usability.

Let’s dig in.  First of all I bought the 1st Gen Apple Watch probably the week it came out.  I probably wore it a week as I found it to be remarkably unusable.  It sat in my drawer for years until my daughter out of the blue asked if she could have it.  Yep.

So I watched the Apple Watch mature a little bit and I kept up with the reviews.   And while I poo-poo’d overly analytical reviews earlier, I do read them.  Somebody has to do that stuff, it just won’t be me.   The Apple Watch just never caught fire in my opinion until the release of the Series 5 watch.  Once I started reading on the merits of Series 5 I was hooked.

First of all it is crazy configurable. 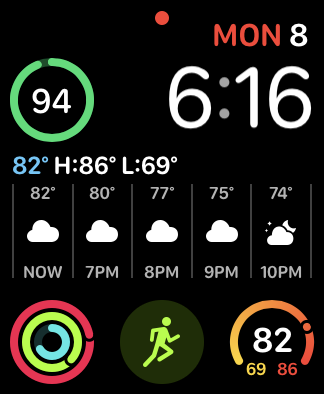 My watch face is called “Infograph Modular” and you can change just about every complication (that’s what watch geeks call all the stuff the watch does or displays).

I found that the battery state was kind of buried just a little bit but buried none the less.   Not now.  It’s in the upper left hand corner.

The Workouts app which is pretty much my reason for having an Apple Watch now is in the bottom middle position.   So EASY to get to.  The integration between the Workouts app and the Apple Health app is amazing.

More on that later. 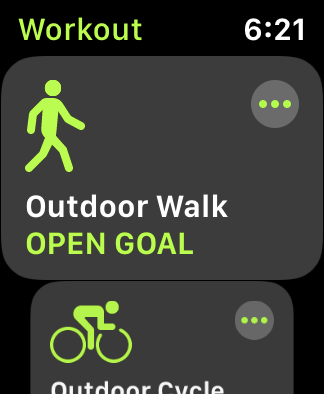 The Workout app is so simple it ISN’T EVEN FUNNY.

If I’m walking or cycling or doing an elliptical session all I do is PRESS THE ACTIVITY and it starts tracking it (with an Open Goal).

In turn the Health app in the background grabs whatever data you allow it to gather.  Between the Workout and Health app you’ll pull in speed, elevation, GPS mapping, heart rate, % of maximum heart rate……….it’s just stupid how much data you get.

Then you pull that data into your favorite fitness tracker program.

Lots of people use Strava instead of Workout, and that’s okay too. I personally use a program called RubiTrack and I have an app on my phone called rt2go. 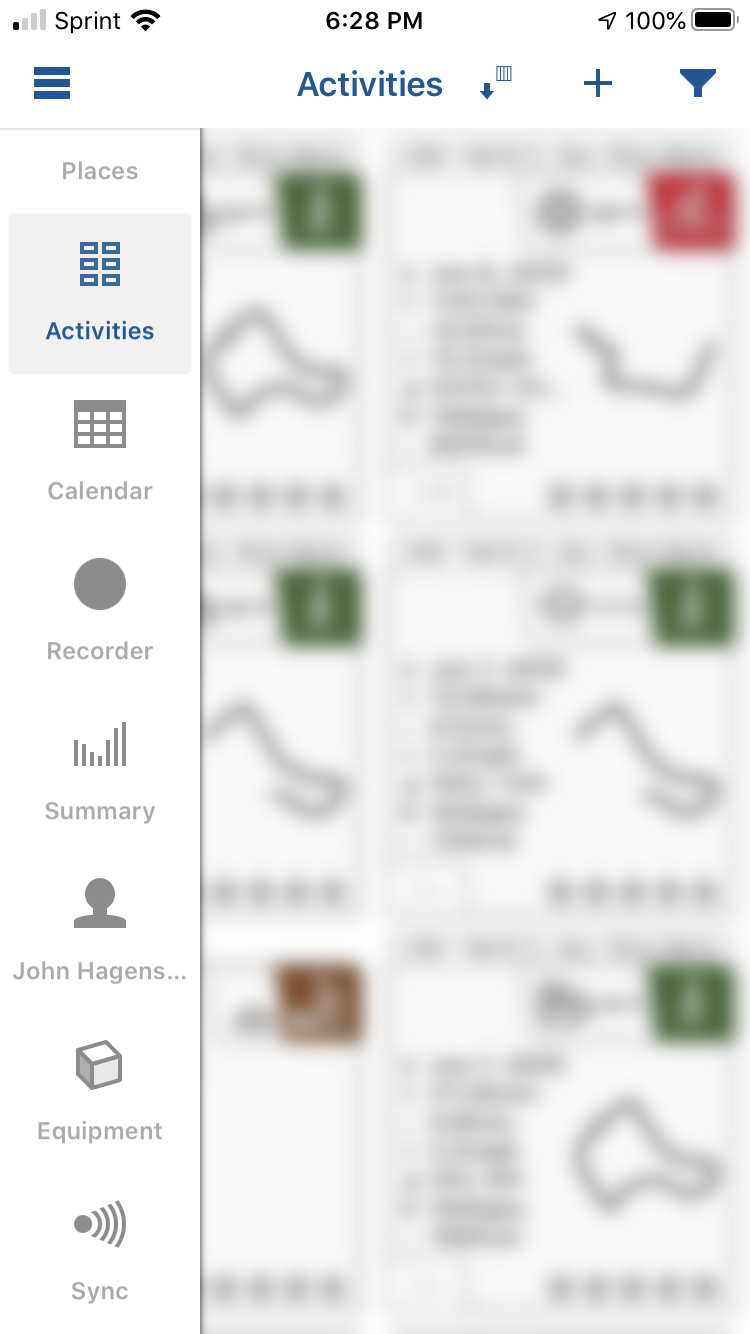 It pulls in all the activities you have on your phone and you can then sync to your computer.  Looks like this: 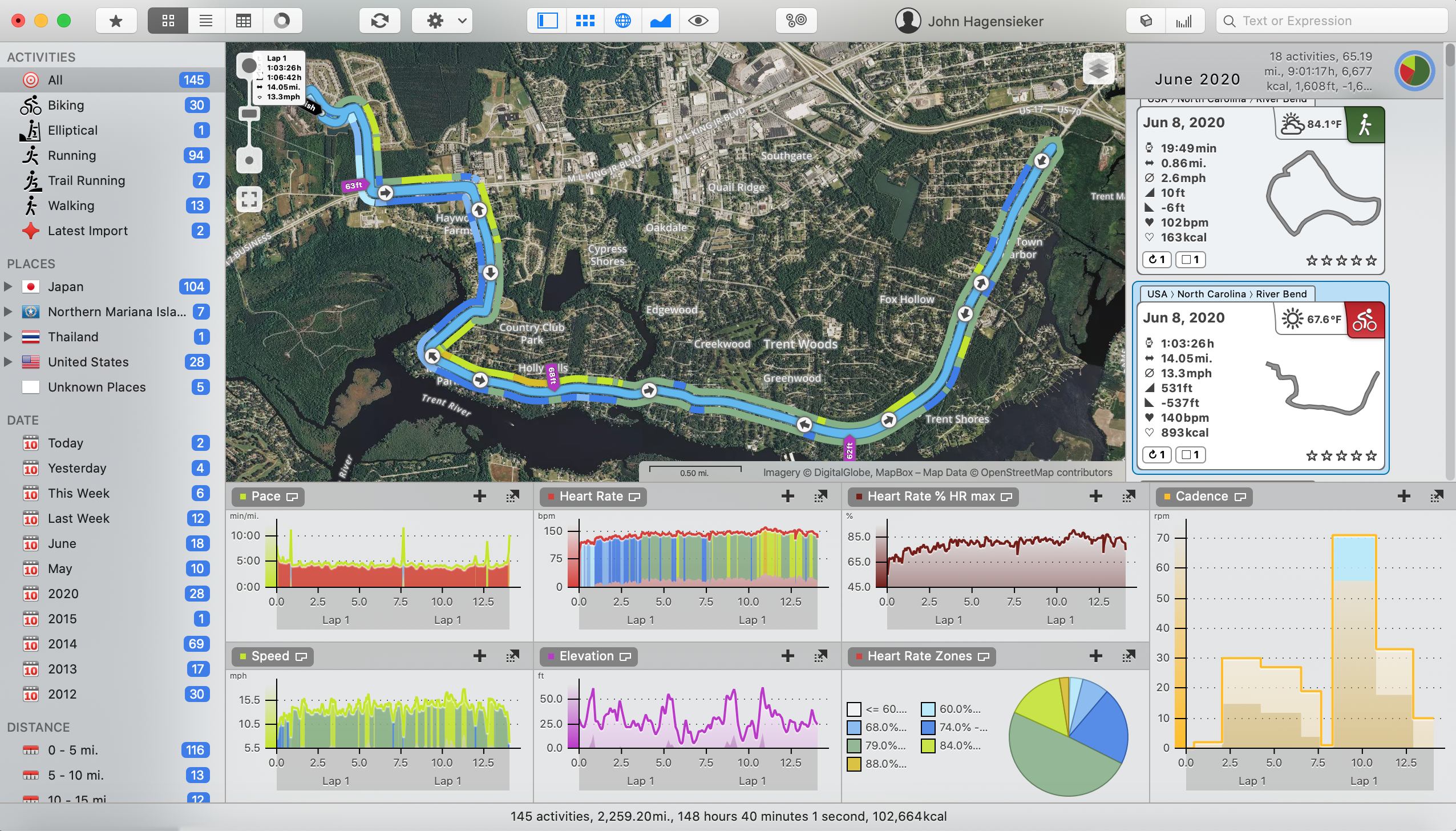 Look at all that beautiful data.  I can explore my heart rate at any point during the ride which is something very important to me at this point in my (return to) fitness.  Also it adds cadence, and everything else I mentioned before and displays it on a big beautiful map that is interactive.

This is just how I do it.  Again there are other apps and some may even have a better, smoother workflow than this.

I’ve also had to put myself back on a diet again and have been counting calories using a program called MyNetDiary.  It also integrates nicely with Apple Watch.  If I log a food on my iPhone which I can also scan in barcodes and QR codes it immediately displays on my Apple Watch.  At a glance I can see how much exercise I’ve done, how many calories I’ve consumed and how much water I’ve drank. 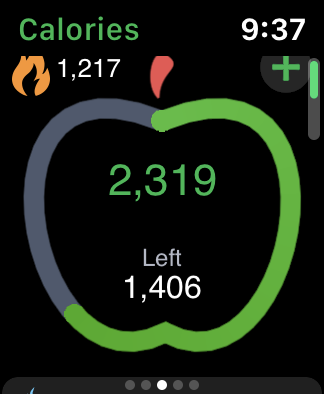 So let me cover this again by typing slowly for those of you who can’t read very fast.

I touch the screen on the activity I want in the Workout app and it exports data to the Health app which in turn I can easily sync with my fitness program.

Any calories I log in MyNetDiary automatically sync up to my watch.

Uber simple. And amazing to view on a computer screen.

Not only does it monitor your heart rate it also can do an electro cardio gram (ECG) test on you. THAT IS INSANE!  Ok, I wouldn’t use my watch to replace a real doctor but it gives me useful data that if I keep an eye on might let me know when it’s time to go see the doctor. 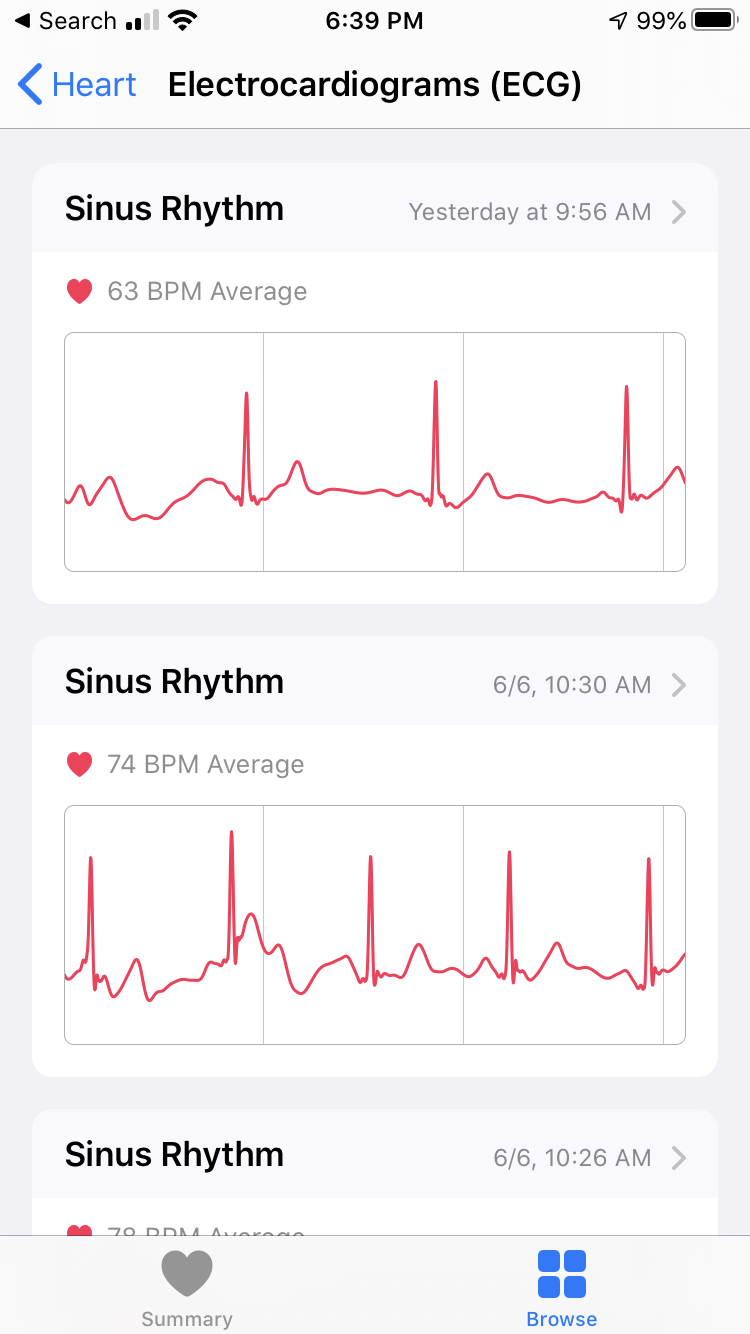 So, I’m trying to lose weight.  I’m 57 years old and concerned with my heart rate and trying to be intelligent about my fitness program.  I can track ALL MANNER OF USEFUL DATA on my physical health, and it does that with not a lot of interaction required by the user.   To do an ECG you have to hold your finger on the scroll wheel button for 30 seconds while keeping still.

Wow!  I know my resting heart rate, the percentage of maximum heart rate achieved during exercise, and can monitor my Sinus Rhythm.

This is unbelievable and also considering I bought the watch for $300 on Amazon.  The watch is usually $399 and like $349 if you have an Apple Discount.  As a veteran or government employee I get 10% off.

So far I’ve only talked about fitness.  As a wearable device it is pretty slick in a lot of other ways.   One of my favorite things is that I can ping my iPhone if I can’t find it and I AM TERRIBLE ABOUT NOT PUTTING MY PHONE IN THE SAME PLACE WHEN NOT USING IT. 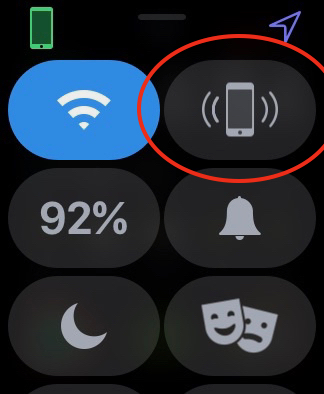 Swipe up on the Face screen and push the button circled in red.  Pretty soon your iPhone will get loud and start flashing the LED.

This watch has a ton of tricks.

I recommend the following apps for usability:

The ability for you to monitor your environment and take care of yourself is just insane.  I can’t believe one small device can do all this and do it intuitively.

So, I’m on a bike ride and get a text.  Flip up my wrist and in a glance I can see my messages.  Very handy.

Is there anything I don’t like about it?  Yeah I guess.  The battery life is like 18 hours.  If you wear it all day then you can’t track your sleep.  It has to come off your wrist but it also warns you in the evening if you have enough battery to do the Sleep app.  They really thought of everything.

It does charge really fast though.  I gotta hand it to them on that.

I’ve had the Face complication change on me a couple of times seemingly uncommanded and I can’t figure it out.  I’m sure you can save your setup but I haven’t figured that out yet. I have to select info graph modular and start all over every time.  Yeah, its probably me or something I’m doing but like I said, I haven’t figured it out yet.

If you hated the Apple Watch 1 you might just find the Series 5 Apple Watch is a whole new ball game.  If you aren’t monitoring fitness it might be an overkill gadget of dubious usefulness.  If you are trying to get fit I really can’t imagine anything better.

Your mileage may vary.  My mileage is increasing on my bike and my runs though!