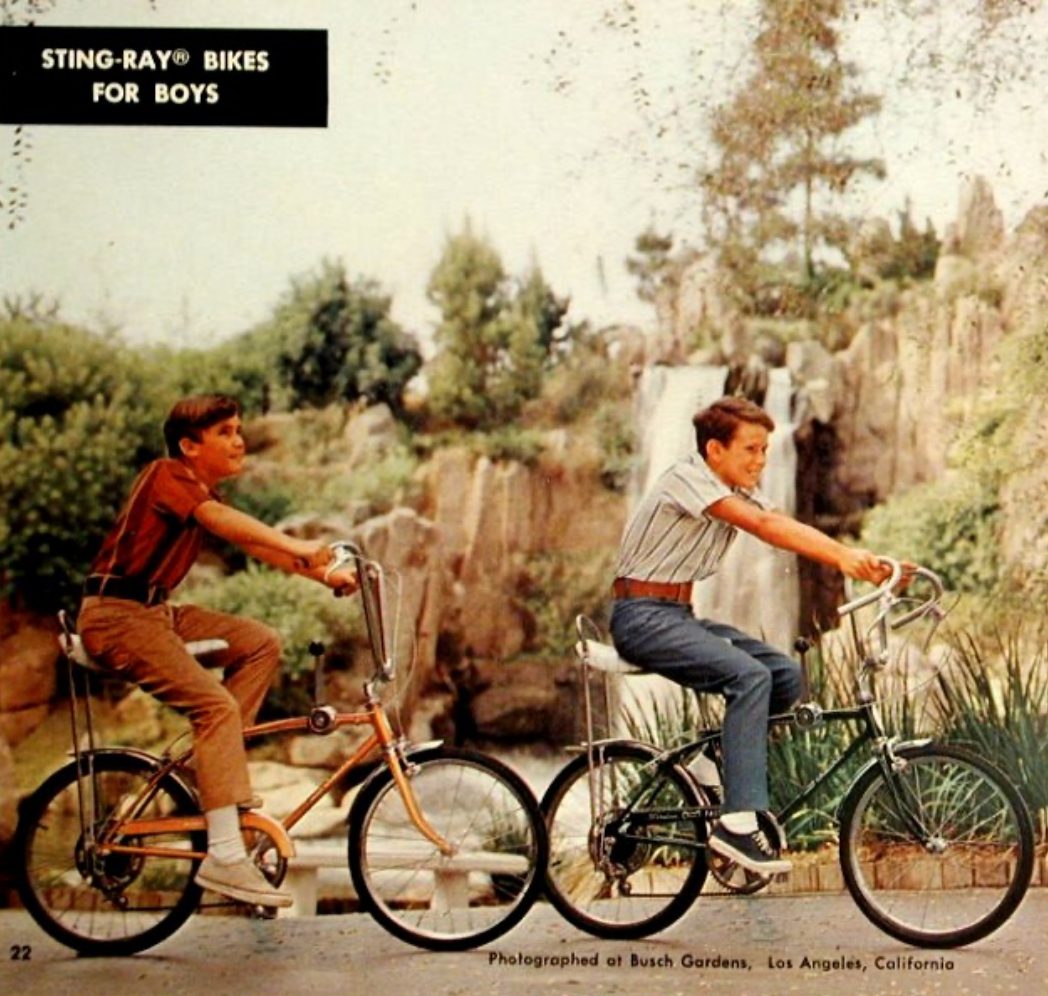 Do you remember your first bike?  I do.  That first bicycle was your ticket to independence.  You could GO PLACES that were previously unobtainable to you or they suddenly became obtainable a lot faster.

This may have not been my absolute first bike but it was my first REAL bike.  A 1968 Schwinn Stingray.  I’m mostly sure about this because I remember the Coppertone color and not the year but the Stingray history has the Coppertone color in 1968 which would have been about the right time as well.

Getting a new bike is still like that for me.  Although primarily I ride my bike to lose weight and maintain health I still get a thrill of GOING PLACES and driving down roads that I probably wouldn’t take my car down.  The ability to view your surroundings is greatly enhanced with a 360 degree unobstructed view traveling at 15 miles per hour vice 55 miles per hour in a metal cage.

Alas, this is supposed to be a Tech Blog but bicycles are quite technical these days, and what could be more technical than a bicycle that folds up into a small space and is ready to unfold and ride in SECONDS?.

I got my first folding bicycle around 2008, I think, from a Sporting Goods shop in Okinawa called Sports Depo.   Pretty sure it was a 2008 Dahon MU P8. 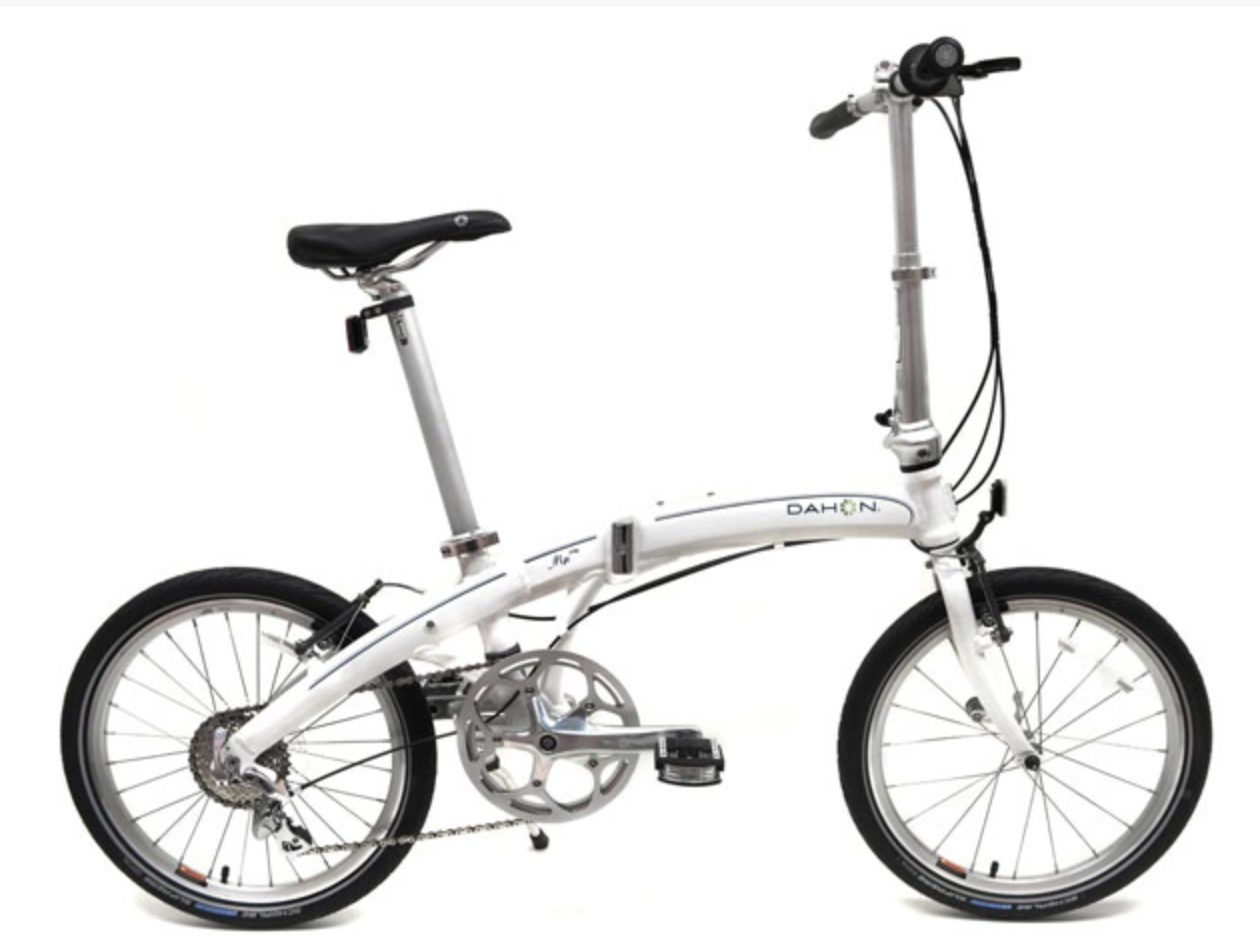 I was going through a bike phase and something about this bike intrigued me.   It was small, relatively light, and folded up into a neat little square.

I used to travel to a nearby island for work called Ie Shima which was accessible by ferry. I would sometimes just carry the bike onboard with me and unfold on the other side and go have an adventure.  Such are the things memories are made of.

From there the obsession mounted.  At one point I think I had 5 Dahon folding bikes and I had them staged all over the place.   One at work, one in the trunk of the car, a couple at home…….and I used them. If I wanted to run to the nearby store I grabbed a bike.

When I moved to mainland Japan in around 2009 I used to take the bikes on the local trains with me.  I would ride up a few stops, get off the train, unfold the bike and ride around whatever town I landed in before riding back to the city I lived in (Iwakuni).   What a way to interface with the local culture.  I learned things about Japan and saw things in Japan I would have never experienced without having that folding bike.  I cherish all those experiences to this day.  And while I have the ABSOLUTE WORST MEMORY of any man alive I remember many of those rides in vivid detail.  As Archie and Edith Bunker sang, “Those Were The Days”.

Fast forward to 2015.  Uncle Sam saw fit to return me to the United States and dropped me off in New Bern, North Carolina in proximity to Marine Corps Air Station Cherry Point.   One of the first things I did after receiving my household goods was to get one of my folding bikes, a bright red Dahon Speed P8 and take it for a ride. 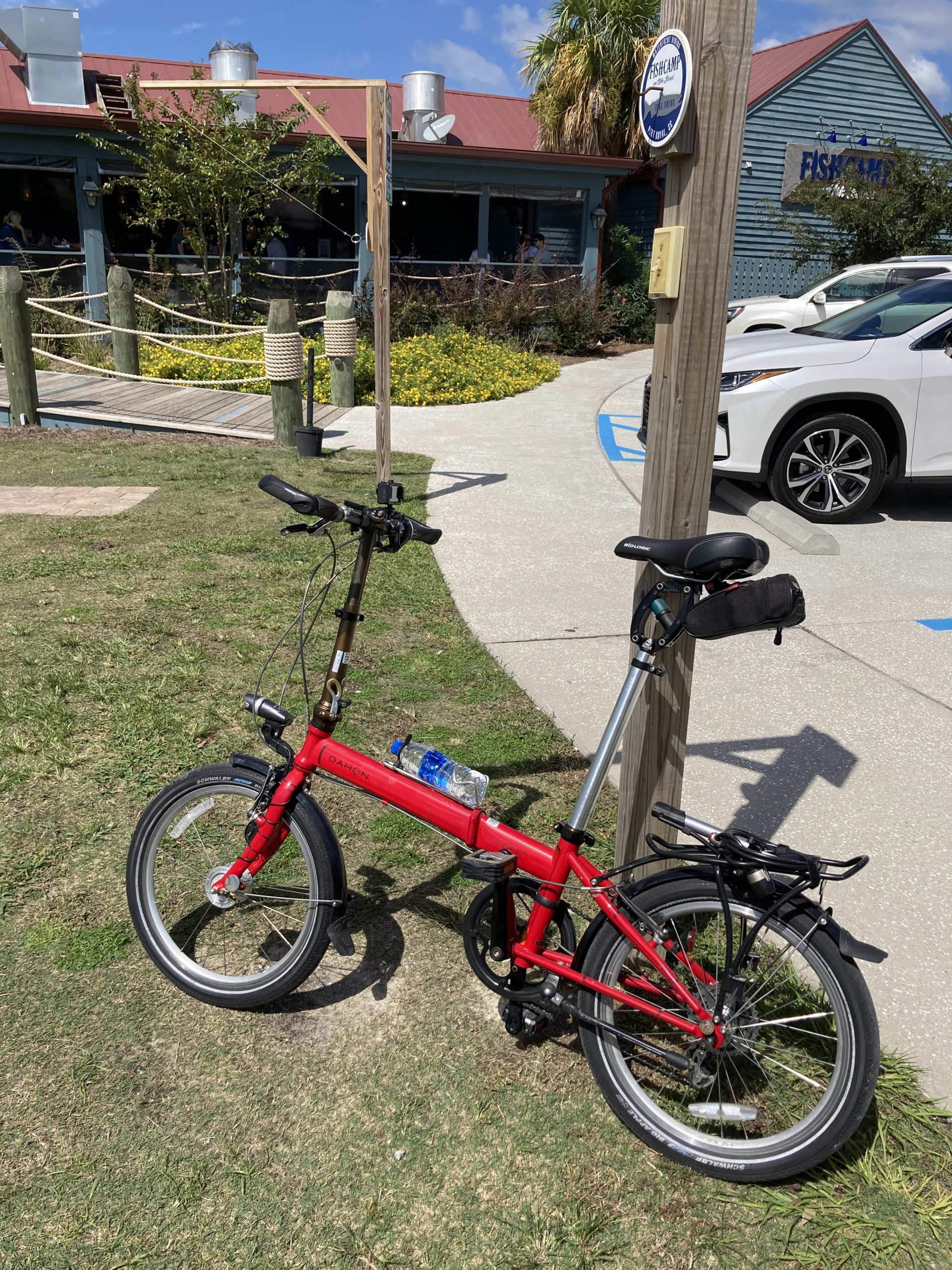 That pic is actually from a recent ride but, hey, you get the idea.

Anyway on that first ride in the US…………SOMEBODY THREW A FUCKING BOTTLE AT ME.  On a Sunday morning no less.   They missed me because A) they were probably drunk and B) because they were stupid inbreds.   At any rate I turned my bike into the wind and headed home in defeat, my dreams of riding foldies in the United States CRUSHED!

Fast forward to 2020.   After the COVID-19 crisis in March I was allowed to telework from home. I had always gotten up and jogged or did some elliptical before work but this afforded me some real time to exercise.  So instead of working out from 4 – 5, essentially I had from about 4 – 8 to make things happen.

So I turned to bicycles again.  Full size bicycles.  On my last trip to Beaufort South Carolina my co-worker and I stayed at a hotel located right on an 18 mile long multi use path.  We both decided to take our bicycles down and ride after work most days we were there.  What better mission than for a folding bike?  The picture of the red Dahon Speed P8 above is from that series of rides.  So once again, I have caught “Foldie Fever”.  I had forgotten the sheer utility of having a bicycle that fit in the back seat of the truck.

So I started digging out the remnants of my folding bike fleet and came up with the following: 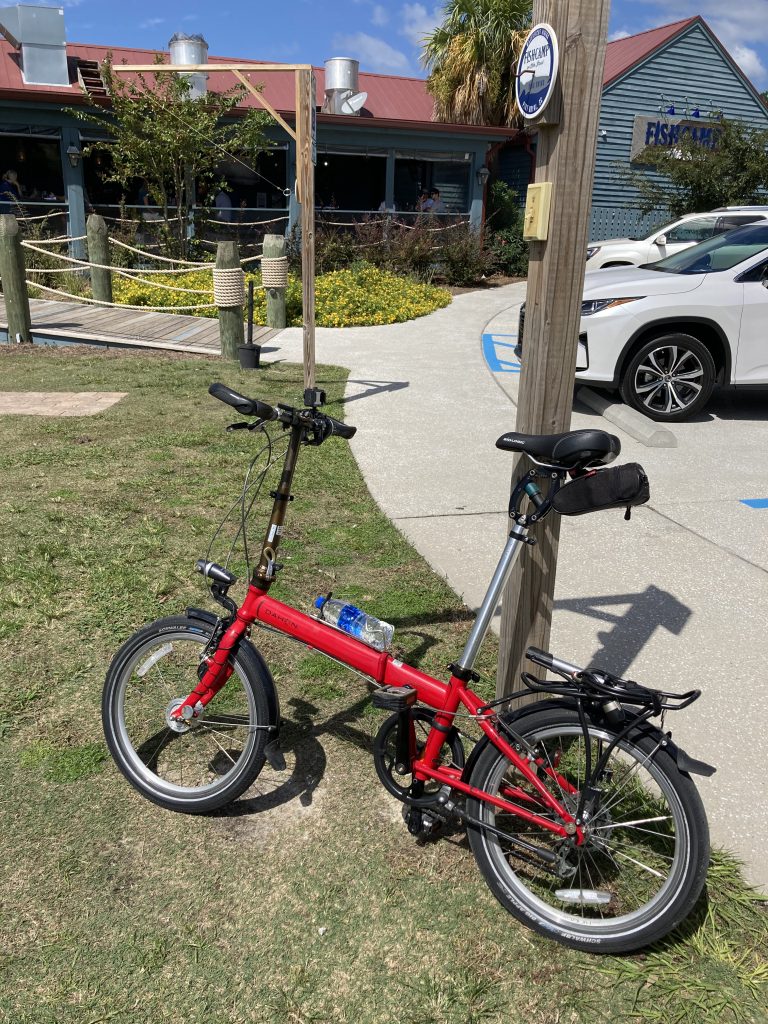 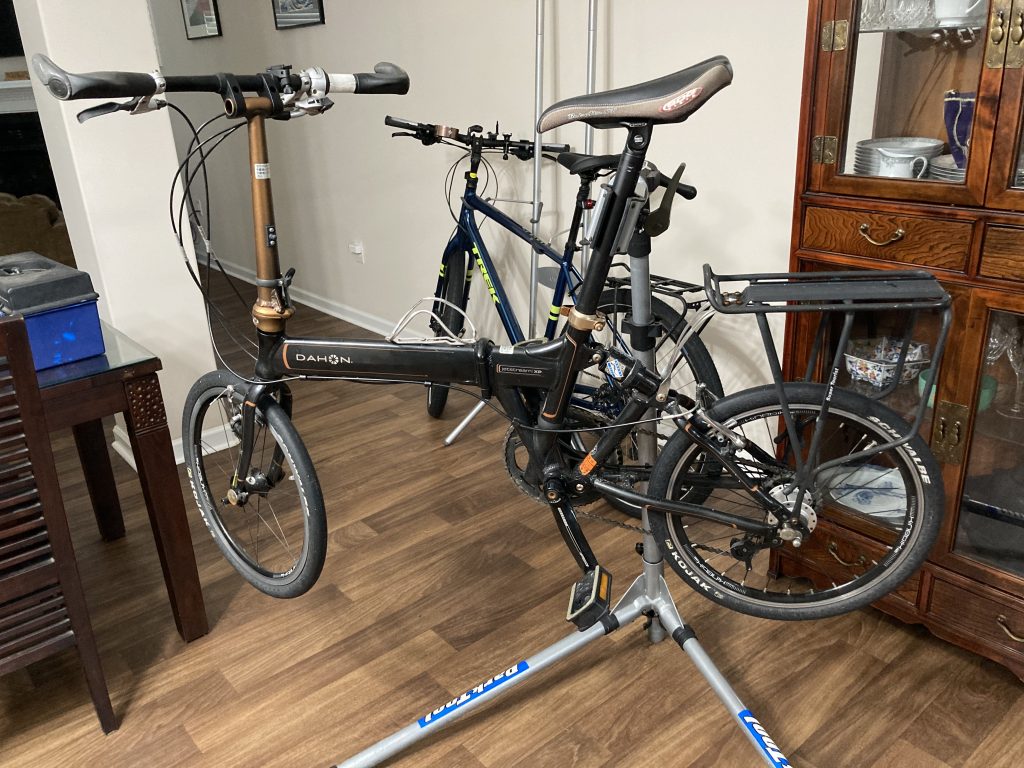 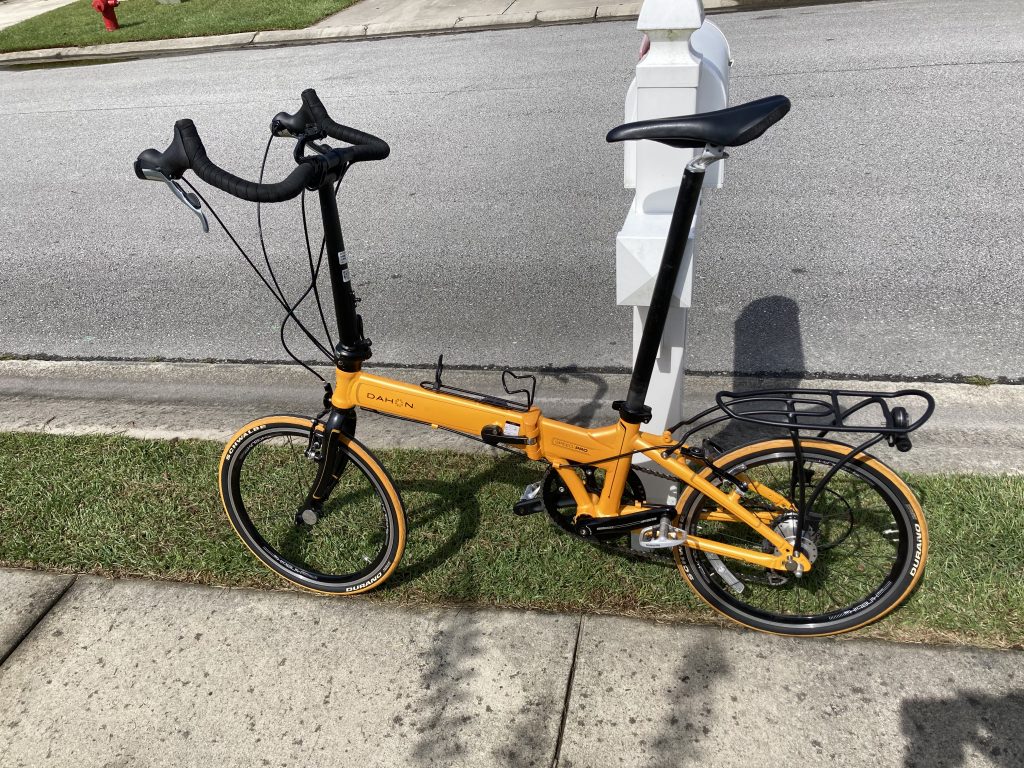 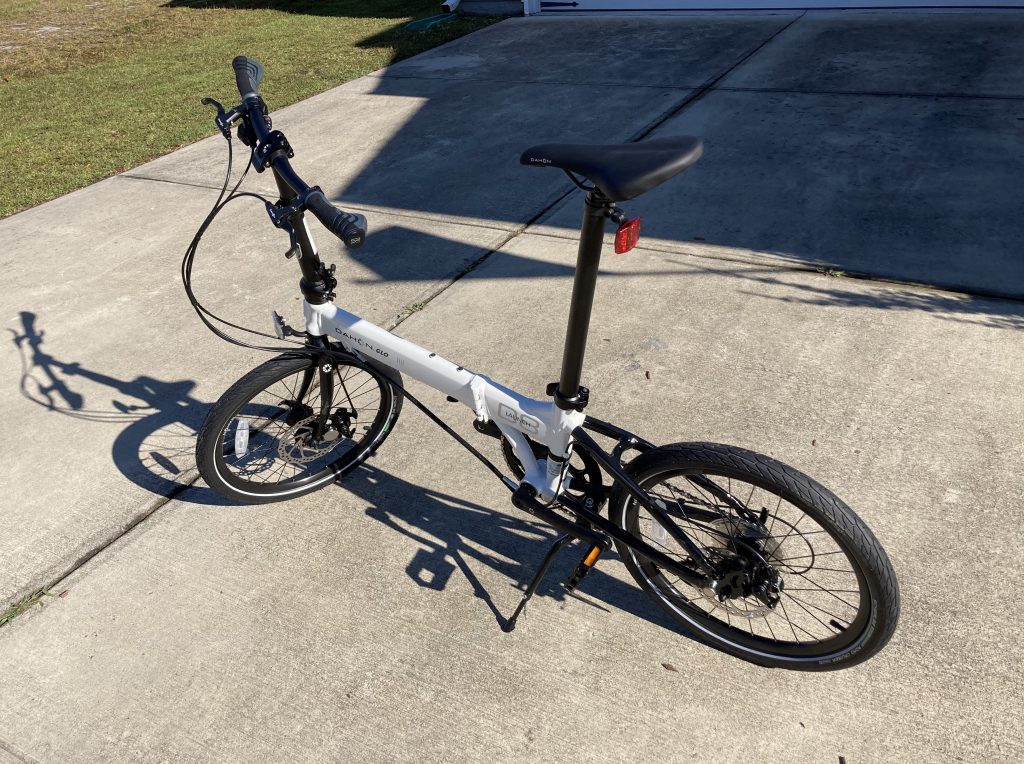 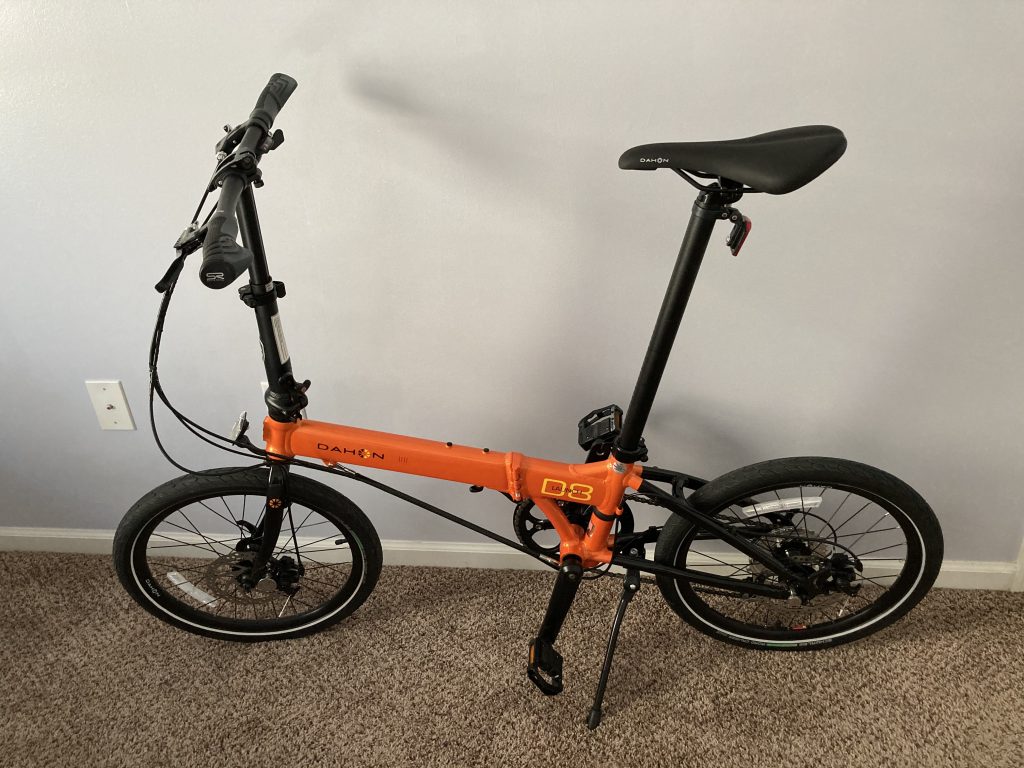 The Launch D8’s are intended to be camping bicycles and traveling bicycles for her and I.  I’m gradually trying to suck her into my sickness.  So far it is working.

While there are several folding bike companies it is pretty apparent that my favorite is Dahon.  Another company I am considering trying is Tern.  Tern bicycle company is owned by the wife and son of the owner of Dahon if that tells you anything.   They seem fairly similar.

One of the things I like about the Dahon’s is that they have been around long enough and are popular enough that there is a wealth of spare parts and custom parts for the bikes.   Let’s face it.  A folding bike has more moving parts and is therefore prone to some extra mechanical issues.  Having access to spare parts is IMPORTANT.

My favorite source for the bikes and bike parts is ThorUSA.  I’ve been buying things from Thor since my first round of Dahon sickness in the mid 2000’s and have had nothing but excellent service.  In fact, if you email the Dahon company it is entirely likely that Thor will answer.  I’m not sure what the business relationship is there, however it is all good as far as I am concerned. Case in point:

My orange Launch D8 just came from ThorUSA (shipping receipt actually said KHS Bicycle Parts).  The UPS guys had apparently been playing Demolition Derby with the bike box and there was some damage however the damage was all to removable components that stick out with no damage to the bicycle itself.

So I take pictures of the damage and as gently as I can I mention that I don’t want to return the bike but it has damage to several components and “what would you like to do?” meaning maybe he wanted me to return so he could go after UPS for insurance.

In less than 10 minutes he emails and says (paraphrase):  “I’m sending you all the stuff that you listed as being damaged”.  I’m going to guess the parts probably come out to $50 or $100.  Quite frankly I was stunned he did what he did. Stunned in a super happy way that is.

Even though it is disappointing to spend big money on a bike and it appears damaged, when somebody treats me like that as a customer……….then I’m going to be and remain a loyal customer.

So the moral to my story is that you Thor seems in some manner to be Dahon or be affiliated with Dahon, and he provides excellent customer service before, during and after the sale.  I don’t think you can possibly go wrong by dealing with ThorUSA.

Here’s a video of my Launch D8 which highlights some safety issues regarding just taking a bike out of a box and riding it.

No matter what you ride, even though I’m just some guy on the internet, I want you to be safe.  I want to wave at you as you ride by me in the other direction as two bike riders are prone to do. And then I want to see you on the next ride.  We should advocate safety for one another and we should support the sport that we so enjoy.