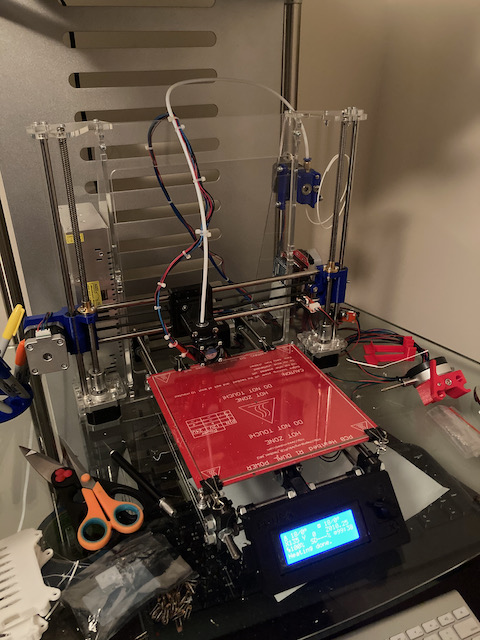 I have been 3D Printing for maybe 5 years now.   I’m not a drop dead, full on expert, but I have learned a few things. I honestly believe the best way to break into 3D printing is to buy and build a cheap Rep-Rap machine and upgrade.  Go through all the trials and tribulations and then get into the higher end machines.

One thing is for certain.  Your printer will break, or clog or something…….and then you’ll have no earthly idea what to do when that happens.

That is how I got my start.  I found a place called RepRapGuru (which I think is out of business now) and bought a $200 printer.  After I built it and got it printing which was no easy feat, I did a boatload of research and found out that upgrading certain components would increase my quality considerably.  So I did just that.  Instead of threaded rod for the Z axis to go up and down on, I got proper lead screws.  Instead of the cheap Chinese hotend I put an E3D-V6 hotend on it.  Then I changed the extruder to a compact Bowden, then I reprinted most of the parts, and on and on it went.  All of these changes made me go inside the firmware and change THINGS…..an invaluable skill……..I still have this printer and believe me, it works GREAT.

The first indicator of that is that there is so much interest in the printers it is difficult to order one and not have to wait prior to shipping.   I just bought one of their latest and greatest printers, the i3 Mk3S+ which had a published lead time of 2-3 weeks.  To my surprise they shipped it a couple days after I placed the order.   There is a LOT of demand WORLDWIDE for Prusa printers and it of course gets worse when they make and release new printers as in the current case of the Mk3S+ and Mini+.   They are very upfront about the lead times so there shouldn’t be any consternation on the purchasers end.  You’re either willing to wait for the best, or you aren’t.   And remember……… Demand, plus COVID, plus increased shipping EVERYWHERE equals delays.  It’s probably not all their fault.

Another indicator of their unique business practices is that the printers are Open Source.  The files to print all the parts are freely available.  The parts lists are freely available.  The code and software is available on GitHub.  The advantage to that is that developers and designers and hobbyists can suggest changes (or change their own machine) and share with the community.  The best changes will get incorporated into new production printers.  I could talk all day about Open Source, but essentially when a whole community gets behind a project it will just improve, and improve, and improve.  This seems to be the case with Prusa Printers.

One last thing that caught my eye is that they make their own filament. So here they are building printers and buying filament just like the rest of us do.  There is a massive difference in quality between manufacturers of plastic filament and I have even bought filament that is essentially unusable and other filaments are flawless.   Anyway Prusa created their own production company and makes their own filament.  Not only that but that filament comes with a QR code on it and you can scan your QR code and see the length and tolerance testing ON YOUR SPOOL OF FILAMENT.  Yougottabekiddingme.  That’s incredible.

They also have their own slicer software, PrusaSlicer, which was essentially Slic3r which is also Open Source software.  One of my favorite tricks is doing a color change in the layers. 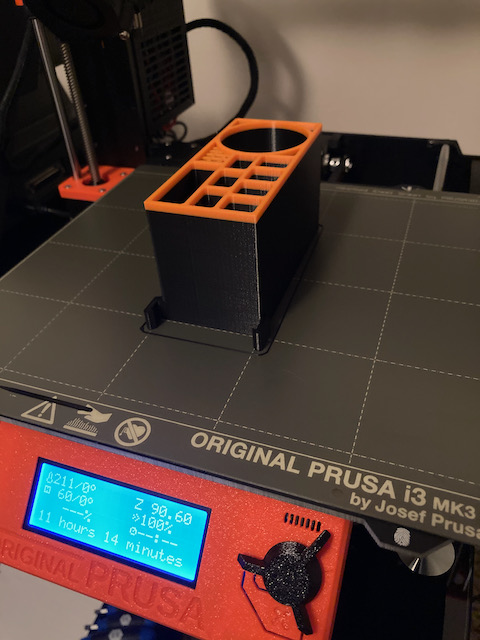 Not only that but they have profiles for darn near every kind of filament there is.  You just tell it the detail you want to print, the filament you have, and what printer you are using and it makes a great slice.  Very user friendly. 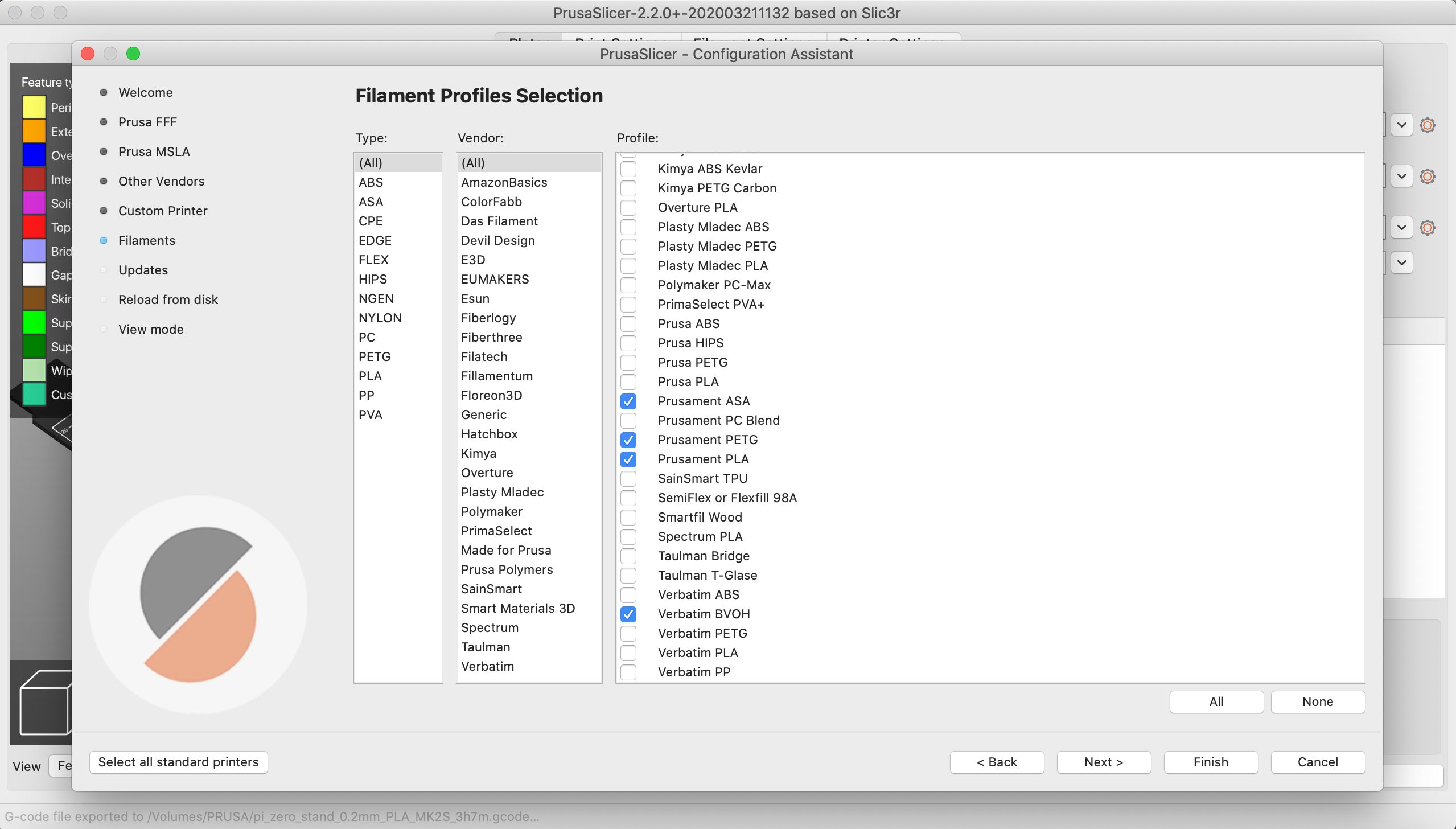 Okay…….so on to the printers and my experience with them.  Probably 3 or 4 years ago I bought a Prusa i3Mk2 which was of course the latest and greatest at that time.  In the 3 or 4 years that I have had it it has only had one issue.  The Pinda probe broke.  It was some kind of wire strain failure because I could wiggle the wire around and it would toggle on and off.  I contacted Prusa, which has 24/7 chat and they sent me out a new Pinda probe.  I forget the exact details of what transpired but I’m pretty sure they sold me the probe at way below what the website price was.  I was way out of warranty so right away I’m loving the customer service.  Somewhere along the line I bought an upgrade kit for it (Mk2 to Mk2S) which sat in the corner for like 6 months until I caught the flu or something and was homebound with nothing to do.

So I’m about a month away from retirement as I write this blog and I want to go into retirement with the latest and greatest printer which hopefully will last me at least 10 years.  Also I want to 3D print as a side hustle to make some lunch money so I want a small PRINT FARM.  At any rate I just bought and built the i3 Mk3S+ 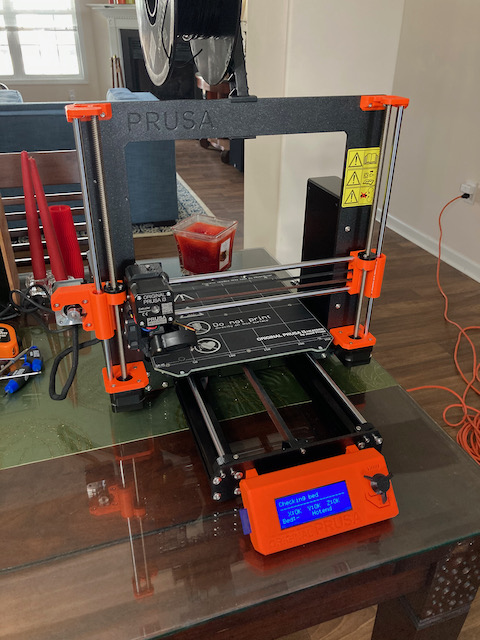 I bought the kit, both to save money (the kit is $200 cheaper), and to have an understanding of how to get inside of it if something goes wrong.  I know building the kit may seem daunting to some folks but that really is the BEST way to get to know your printer.  It took me several sessions over about 3 days to complete the build.   If you just sit down with the kit you can build it in a day.  I just took my time, didn’t get in a hurry, and enjoyed the whole process.   Dare I say it was FUN too?

The best part of the printer in my opinion is the removable steel sheets for printing.  Anyone who has ever 3D printed will tell you that sometimes the part sticks to the bed and DOES NOT want to come off.  You can damage your part or scratch the bed of your printer after a successful print trying to remove it.

With the steel sheet you pick the whole thing up, bend it, and the part pops loose.  Ingenious.

I could regurgitate the specs of the printer but that’s not what I do on my blog.  I like to write about the things a user needs to know……..about the gotchas………right now with the i3 Mk3S+ I’m not seeing anything weird.   If you:

Then basically you can print out high quality stuff.   It just works, and it works well.

Getting back to a comment I made earlier about having a Print Farm………..Prusa also offers a new printer called the Mini+.  One of the tricks up its sleeve is that it has an ethernet port and Prusa is working on releasing Print Farm software.  This is going to be a massive breakthrough in the 3D printing world once this gets implemented.  The Mini+ is a low cost printer at about $350.  It also has some exciting new capabilities such as ethernet, optional wi-fi (ESP8266 module in the future), a color screen, and the coolest thing is when the printer throws a failure it puts up a QR code on the screen which takes you to a web page covering that failure and potential solutions.   These folks at Prusa are really thinking of everything.

Anyway, imagine having several low cost printers, networked together, and being able to monitor them.  Those printers have the ability to run the material off the spool completely then let you know when a change is needed and you don’t need to sit there and watch it.   You may not think Print Farm will be a thing, but trust me, it will be a BIG thing.  And you will want it.

I can foresee old John having 3 or 4 Mini’s networked together making lunch money in retirement.

Anyway, the latest offerings from Prusa are exciting and for all the visible signs of upgrade there are a lot of invisible upgrades that you don’t see.  Firmware, software, filament accuracy………all that behind the scenes stuff is what makes a good print a great print.   Prusa really keeps up with firmware upgrades too and they also have beta software and firmware available if you like to live on the cutting edge.

My conclusion:  The Prusa i3 Mk3S+ is the best consumer grade printer on the planet right now. The Mini+ has improvements that are no doubt going to be introduced into the next generation big machine making things even more incredible.  I expect a breakout slightly from the i3 Rep-Rap style printer with much more complex firmware and displays with network connectivity.