HA!  Most  would tell you that famous line was from the musical group Chicago but it was actually their earlier name that it was released under.  You Are Welcome!

They are probably other reasons.  I’m sure there are some jobs in some industries as well that are done in the absence of light.  You’re probably thinking that your digital watch has a light button on it, but the point of this post is to discuss illumination methods on Analog wrist watches.  I like a mechanical watch that DOES NOT NEED BATTERIES because THEY WILL ALWAYS WORK.  Ever change a watch battery?  Most people can’t do it, and a lot of watch batteries are not in a lot of local stores.

Ultimately your watch should be legible whenever you want to know what time it is. Manufacturers deal with this by illuminating the dials or watch face with various substances. Radium was the first substance used and was for lack of a better word……..dangerous.  Especially dangerous to the individuals applying it for a living.

The next step down from that is Tritium which is also a radioactive substance in a tube that has a half life of about 25 years. 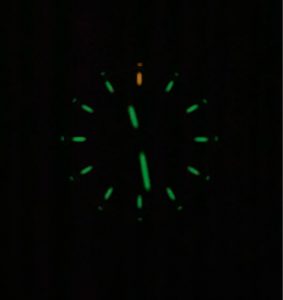 The Tritium tubes glow continuously, but are not really noticeable during daylight hours.

After about 12 years the tubes begin to weaken I’m told but they last around 25 years all totaled.

The marks are very legible with an orange tube depicting the 12 o’clock position.  The Mil Spec requires that the marks be completely legible after 8 hours of total darkness   Really the only way to accomplish this is with Tritium.  While you will find some long lasting lume compounds they may not function for more than 8 hours in COMPLETE DARKNESS.

Here is the Seiko lume which is commonly called LumiBrite. 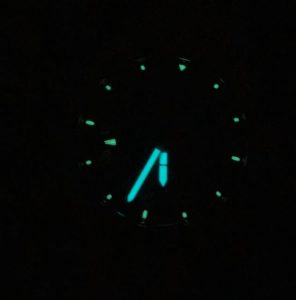 The Seiko LumiBrite lasts around 3 to 5 hours however it won’t look like the pic to the left after even a couple hours….

But it is still legible.

The other night I woke up around 2AM and all I could really see were the blue hour and minute hands and then just barely, but I most certainly could tell what time it was.

You may notice the second hand on the Seiko 5 is illuminated as well. 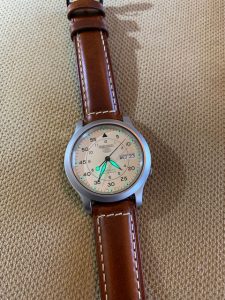 While I mentioned earlier that the blue lumes glow longer the green ones tend to illuminate brighter.

Of course when you think fancy watches, you think Rolex.  Rolex uses something called Luminova which is essentially strontium aluminate.  There is also a lume substance called Super-Luminova.  I don’t have a Rolex…….so you don’t get a picture.

There is a lot more to know about watch lumes however the choices are sort of limited.  Radiation or photoluminescence.  Also the application of the substances matters as well.  More coats of luminescent materials makes for a longer lasting lume. Hope you learned something!

1 thought on “How To Tell Time In The Dark”