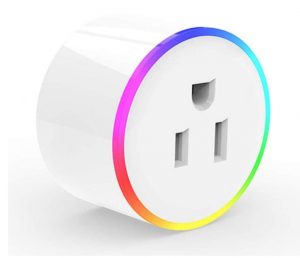 Bought some of these plugs a few years back and never used them much because I put z-wave smart switches all over my house.

Well, I have a “new” house now which was built in the 80’s and it doesn’t have a dedicated neutral line which limits my smart switch choices a bit which leads me back to the smart outlets.

Enter “Tasmota” which is a custom firmware with Open Source code which means you can see the code which makes you feel more comfortable when you say “Alexa, turn on Safe House, Safe Room lights”.  That of course is an exaggerated joke.

So, this post is mostly for me.  In order to flash these devices it is rather complicated and requires a program called tuya-convert.  I won’t go into that here and I have blogged about it in the past. The reason I’m writing this is that there were some minor Home Assistant issues with the code and I’m pasting it here later FOR ME.  Basically you need:

It’s a pain in the ass.  And that is done in the device configuration. 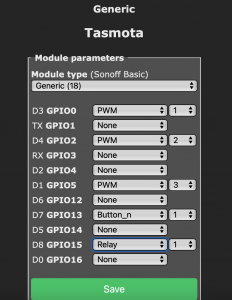 Once installed and configured, it looks like this when you put the device IP address into a browser.  Toggle 1 powers the outlet on and off, and Toggle 2 turns on and off the LED lighted ring. 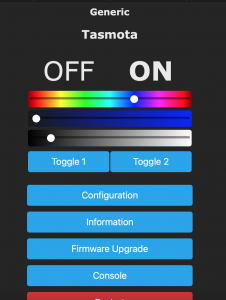 Once you configure an MQTT broker you can incorporate the device(s) into home automation.  I use Home Assistant.  Here’s the code.  Again I am posting this updated code for the file configuration.yaml in Home Assistant.

There are two parts to this

NOTE:  I changed the command topic to “tuyaplug”.  Default is “Tasmotaxxxxx (Tasmota with random numbers behind it.)

That was easy.  That just turns it on and off.  Now to get a color wheel so we can manually control the color of the ring. 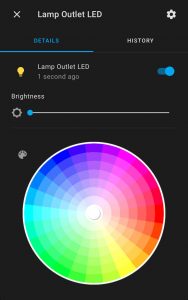 And here’s that code:

The LED rings, while cool, aren’t really practical however they do make pretty nifty nightlights for dark bathrooms.   With Home Assistant you could easily set up an automation to tell the LED light to come on after dark so it isn’t on all the time.