Like the title says……..these are just my first observations.

I have been cutting vinyl signs for 15 or more years, 3D printing for 7 or so years, and using lasers for a couple of years, so I have some experience with computerized things moving along 2 or 3 axises.

CNC stands for Computer Numerical Control which just means a machine is automated by a computer.  I started this because I was making cool stuff in my laser but was limited by my woodworking skills.  I was given a real life wood router which really picked my game up and keeps me from spending extra money on pre-routed wood blanks at the hobby stores.  Anyway, I caught the woodworking bug and invested in an entry level CNC machine.

Enter the Sainsmart 3018 Prover.  I must have caught it just right on a Black Friday Sale or something because I paid around $250 and the price immediately went up about $50 – $100 depending on where you buy it from.  Before I talk about the machine I’ll throw down some general impressions of CNC.

Here are a few notes I jotted down after my first session or two with the machine.

As you can see, some of my initial observations were about software.  The Windows software that comes with the machine is called Candle. It comes with version 1.17 but there seems to be a beta 1.2b version.  Not sure why they don’t use it and I haven’t tried to use it yet.  Basically you need G-Code and Candle sends it to the machine.  If you haven’t designed anything and converted it to G-Code, then Candle won’t take you very far.

Inventables has free web-based software called Easel which Sainsmart recommends for users with newer Mac OS’s.  I have just started dabbling with it and it is pretty intuitive however I hate web-based stuff.  No internet connection, no Easel.  If one day Inventables goes “POOF”, no more Easel.  Or maybe one day you log in and THEY WANT MONEY.  Maybe I’m old school but just give me the darn software please.  Easel initially gives you “Pro” which drops the pro features after 30 days.  While I kind of recommend using it for the first timer, I can’t recommend spending $120 a year to keep a couple of feature.   A 3 year subscription is almost $450.  If you are going to spend that kind of money you might as well get some more advanced software.

EASEL ISSUE:  This probably won’t be an issue for most but I run a local DNS server on my firewall appliance.  All of my computers inside the house have the DNS settings pointed to that server for a variety of security reasons.  The Easel driver WILL NOT connect unless I use an outside DNS  (i.e. 1.1.1.1, 8.8.8.8, 8.8.4.4, etc.).  This does not make me very happy and makes me want to use the offline controller supplied with the machine more and more.

For now I’ll be using Easel but a company called Vectric has some software offerings that not only are awesome but they have excellent training videos as well.  Their software offerings range from pretty affordable to really expensive.  Aspire is about $2000.  I won’t be using Aspire but if I were going to open a store front and sell my awesome creations you can bet I’d invest in it.   It’s probably best in class however best in class is always whatever works best for you.  If you want to carve your wife’s name on a cutting board……….you don’t need $2000 worth of software.

Carbide Create is another popular one and it is downloadable software AND it runs on a Mac.  And of course it is pretty basic and its big brother Carbide Create Pro costs $120 annually or you can buy it forever for $360 but can only update it for a year.  While I don’t like that business model I have to admit the premier laser software Lightburn, does about the same thing.  Carbide Create Pro looks pretty compelling.

But once again……..if you can carve your wife’s initials on a bread board or keychain with the free stuff, and that’s all you ever do………..there’s no need to spend ANY money.   My recommendation is to use free software UNTIL YOU GROW OUT OF IT. 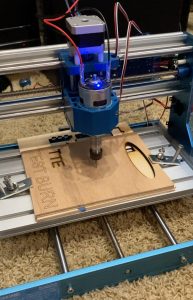 So, now let’s talk about the machine.  I called it “entry level” earlier but I think that really extends to cost.  You can hand a guy the most expensive paint brush and canvas but if you can’t paint it doesn’t matter how good the paint brush is.

I’ve witnessed some of the projects made by users of this CNC and all I can say is the machine is as capable as the operator.  You can make some excellent creations provided your designs are artistic and eye appealing.

Maybe the weak point on the machine (strictly, in my opinion) is the 775 motor that drives the bit.  Having said that……..The motors can be had for just a few dollars.  Order a couple of spares.

One thing I like is that the frame is nice and solid and construction to get up and running is fairly simply.  Lead screws instead of round stock and bearings and belts is a definite plus in a machine like this.

Despite having minimal experience, and after playing with test cuts, I managed to pull off my first couple of serious cutting attempts.  Check them out. 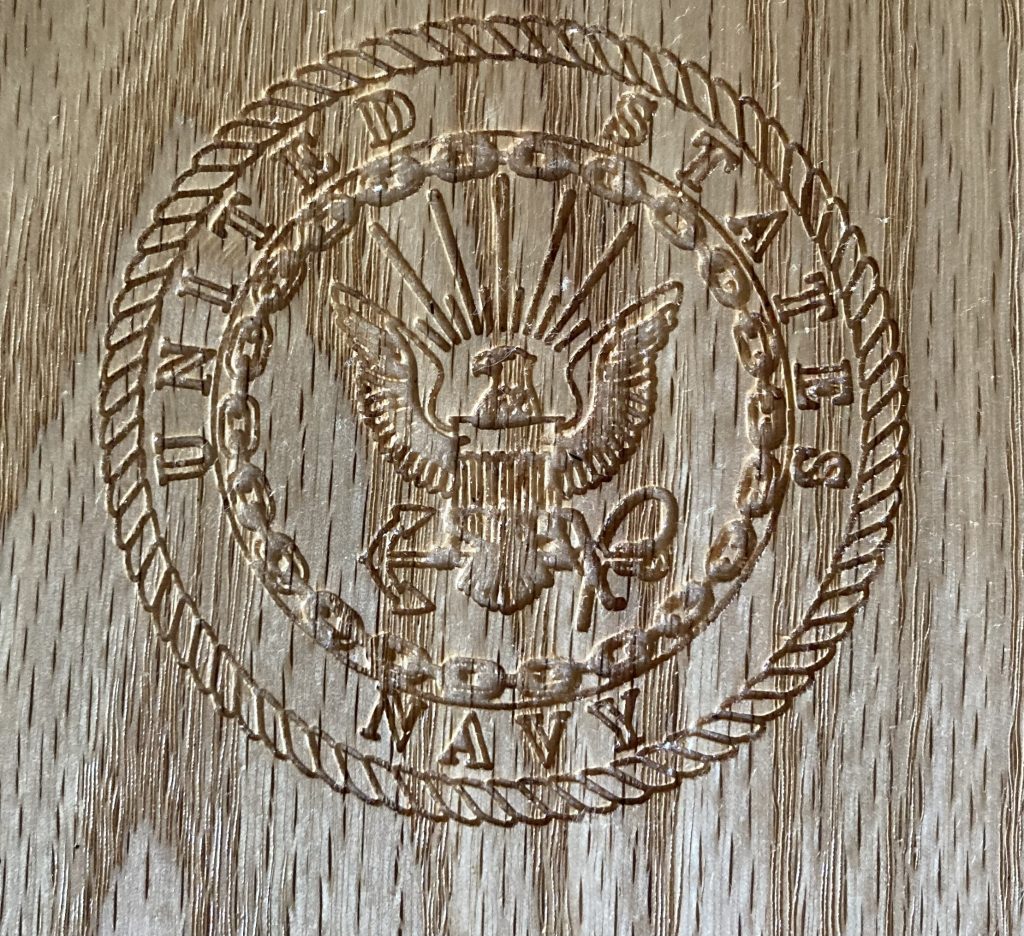 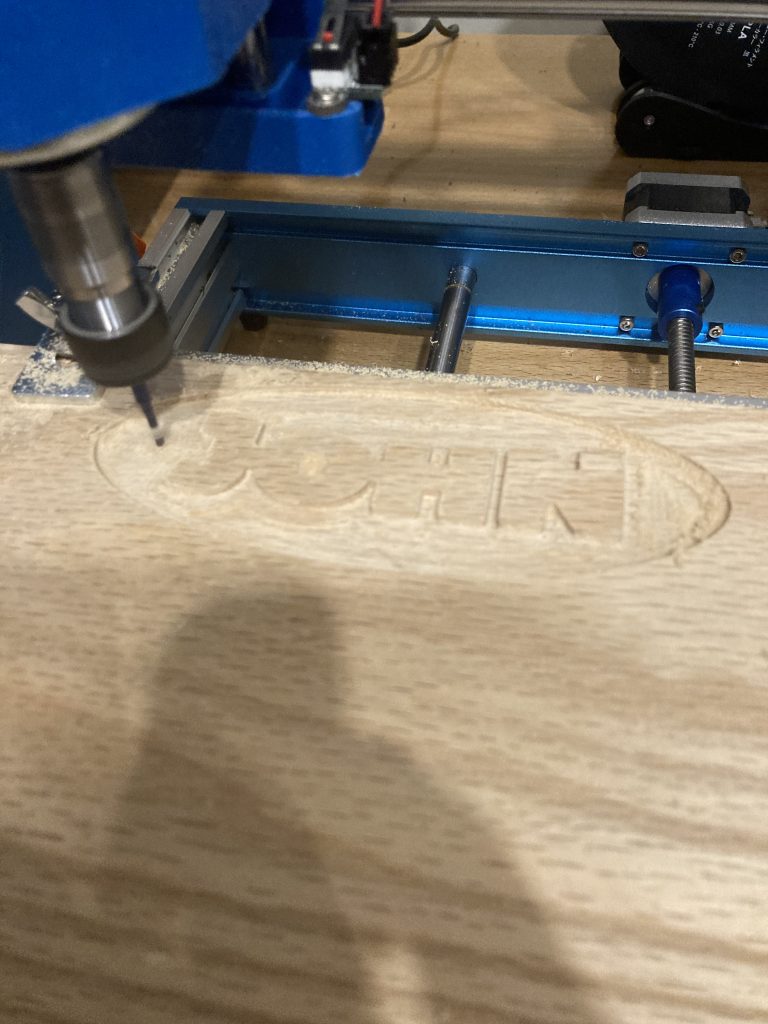 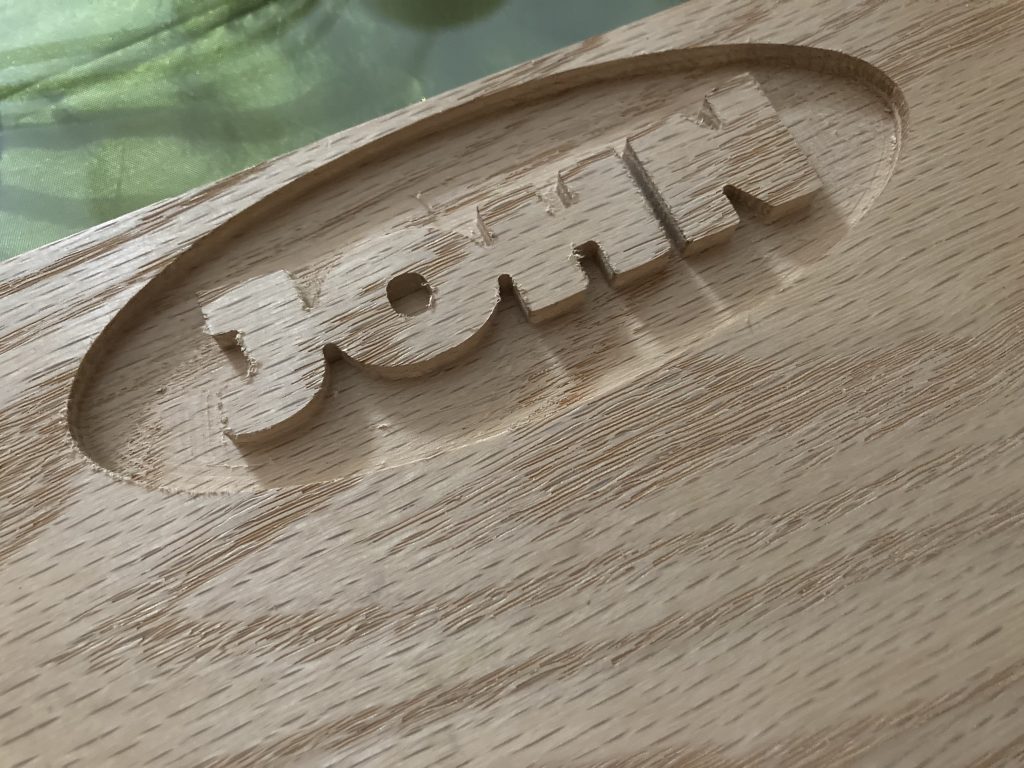 If I had any complaints……..and I really don’t, I guess it would be “I already want bigger and faster”. This machine is kind of slow but I would be willing to bet I could adjust things and speed things up.  Faster is not always better anyway.  A bigger workspace for sure would be beneficial.

Having said that……….They sell a kit that doubles the length of the Y axis for $59.99.  Join their newsletter and they’ll give you $10 off the kit.  Sadly this puts you under their free shipping limit of $50 and shipping is, you guessed it, $10.  Order yourself some bits or something.  Heck you’re going to order different kinds of bits anyway so just do it now.  That’s what I did.

AFTER A FEW MORE DAYS WITH THIS MACHINE…………….SOME MORE OBSERVATIONS. 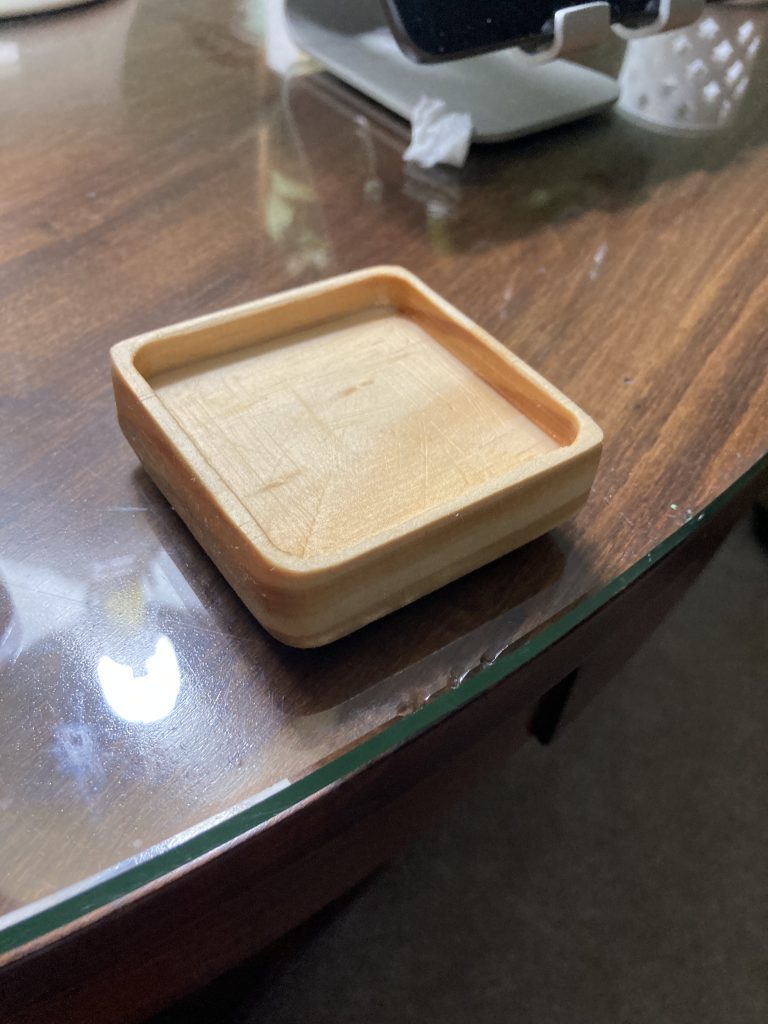 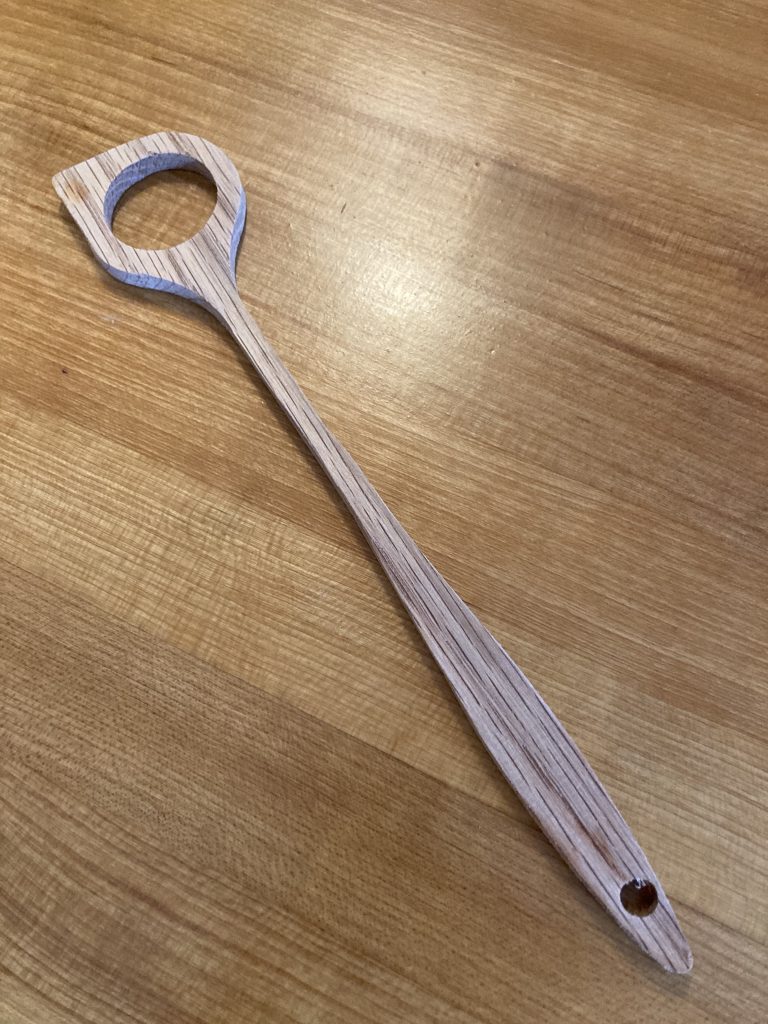 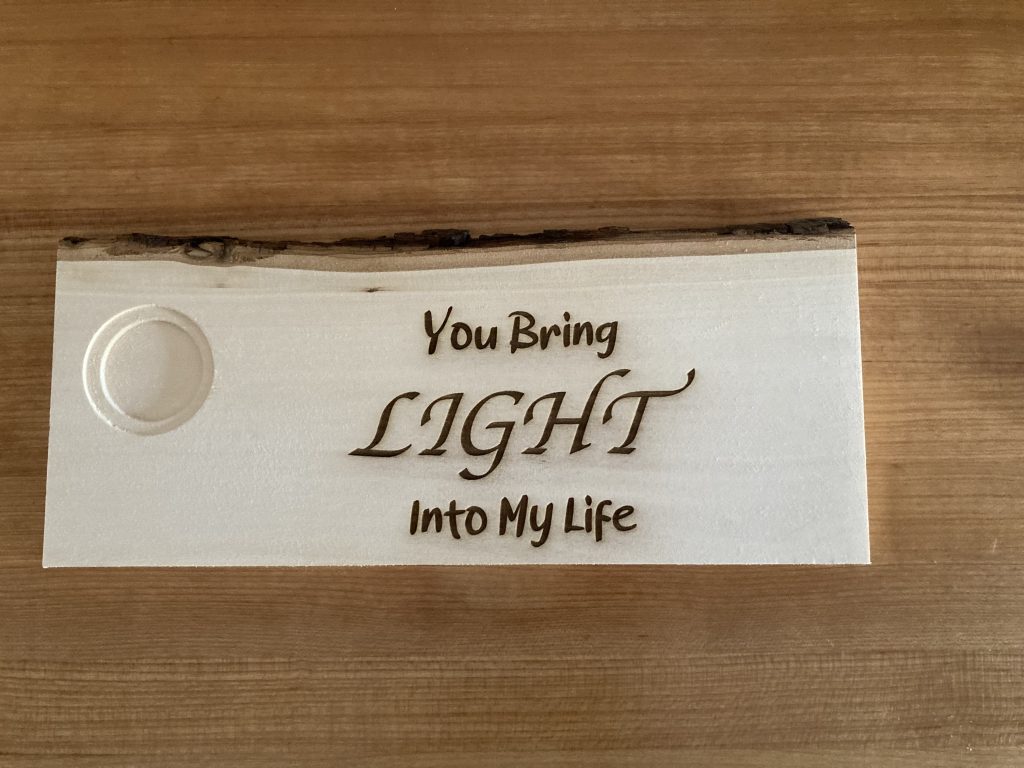 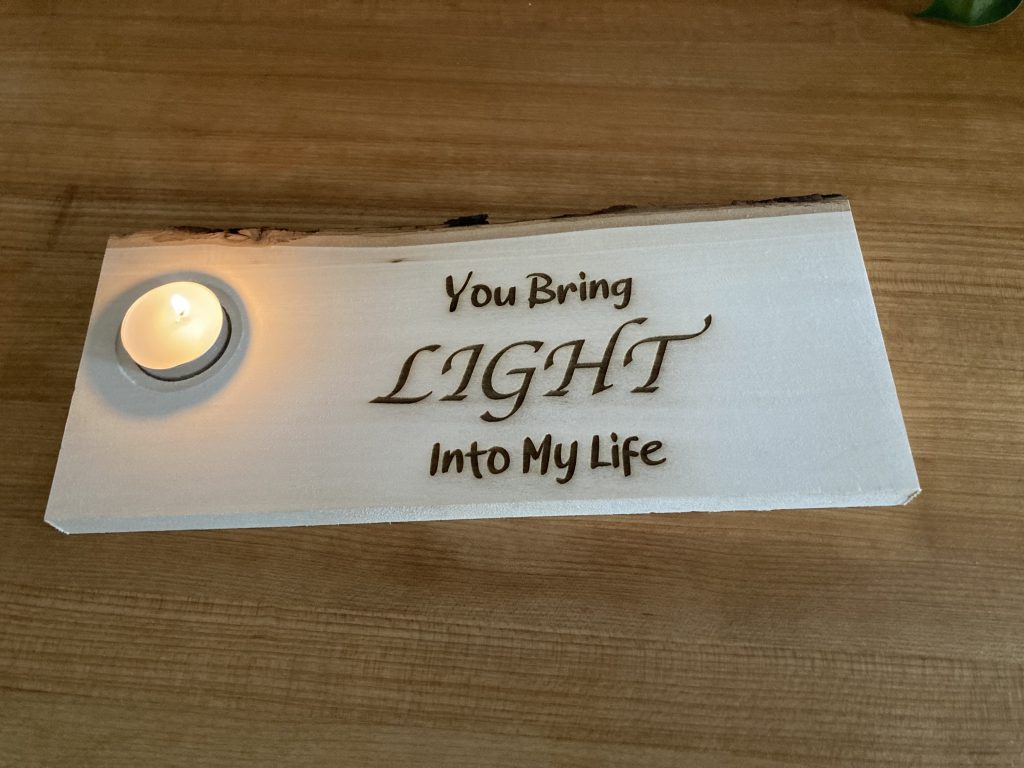 I think my master plan is to exploit this machine, make a couple bucks, and get a more industrial type machine.   In the interim this is $250 well spent.   A bigger machine probably means some of that fancy software I talked about earlier and that is a more significant investment. I think I’d need a real reason to upgrade besides “I want one.”

I’ve changed my mind about the statement in the paragraph above.  After getting the machine, some bits, some collets, a Y extension kit, and some other things I’m probably forgetting I’m already lusting after a Shapeoko 4.  I probably should have just bought one from the get go.

I still don’t regret this purchase because I didn’t think I could use a CNC successfully.  I figured it would be a waste of money because of my horrific, non-existent, wood working skills.  Turns out I have skills.   Spending over $2500 on a big boy pants machine and accessories and software is not the right path to figuring out if you can do something or not.  Start small and cheap.

IF WHAT I SAID JUST DESCRIBES YOU………….BUY THE SAINSMART 3018 PROVER AND DON’T LOOK BACK.  YOU CAN SELL IT, GIVE IT TO YOUR KID, TEACH A BEGINNERS CLASS WITH IT, OR USE IT FOR A BACKUP OR TO CRANK OUT SMALL WIDGETS.

Again I think it does thin material engraving BEAUTIFULLY and clamping isn’t too horrific.  You just have to exploit the things the machine does efficiently and well.

While I may have said a thing or two that seemed like something for the Minus Column, rest assured that I find no fault with this machine and in fact LOVE IT.   CNC’s are not toys.  And they require some technical know how even though product maturation has made things more intuitive these days.   You are not going to get a CNC, a laser, or a 3D printer and not hit a speed bump or two in the learning process.  You just aren’t.

Someone I once knew used to say……..”If you crowd the plate, expect the bean ball.”  Computerized machines throw the occasional bean ball.  And then you learn from it.

2 thoughts on “First Observations With A CNC Machine”