I bought a super cheap Genmitsu Sainsmart 3018 Prover CNC machine.  It is amazing how capable that inexpensive machine is.   It lacks a few important features though.  Size, speed, and it comes with entry level software.  Almost the first thing I learned about this machine was that I was going to outgrow it fast.  Don’t get me wrong, it can do amazing things………..But it is the lower end of the CNC spectrum.  And so was the software.

So I took a step up and bought the Next Wave Shark HD500 CNC.

With consumer CNC machines it seems the next jump up from a lower tier one financially is a mighty one.  In fact it is AT LEAST a 10x’s or more jump.   But with that jump comes a lot of improvements. 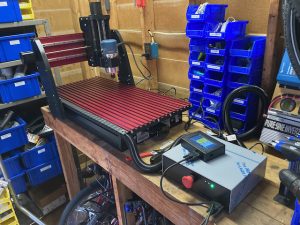 With the Next Wave CNC you are going to get a much larger working surface, improved bed and securing system. Also the axises move via lead screws instead of belts and the gantry moves instead of the table.

Accuracy and precision are improved, as is speed.  Best of all it comes with Vectric Desktop software which is definitely not an entry level offering.

In short, this is a big boy machine replete with lots of bells and whistles.

So, let’s lay down my first impressions……….

Things you need to know before buying:

NOTE:  You can of course use a separate Gcode sending program.  There are several out there to choose from.  Their Ready2 Control software probably is best.  Many people swear by UGS, and Raspberry Pi fans may love CNCJS.  I have not tried any of them yet (with the HD500) and certainly will in the future.  I have used them with my Sainsmart CNC.

As soon as I got the machine built I opened Vectric VCarve Desktop and made a test file where I so ingeniously laid out the word “TEST” for carving.  VCarve was pretty intuitive, I thought, however if you have never used a CNC machine before at all, I bet you lunch it isn’t intuitive at all.   Anyway, I laid out the word, created a Toolpath and carved it out in short order.  My machine and software were working perfectly. 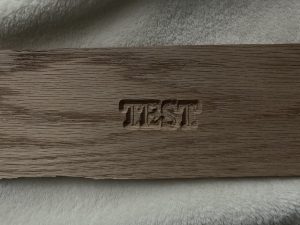 Having been used to the smaller and much slower Sainsmart CNC I was blown away at how fast it carved out “TEST”.

I was also a little blown away at how many chips and how much sawdust it produced.

I might have to look into a dust collector.  Or not.  I’m in a back yard shed and some sawdust doesn’t hurt a thing.

I was also blown away at how LOUD it was and of course the loud comes from the Bosch router spinning at 10,000 rpm’s.  I suppose there are quieter routers but the Bosch 1617EVS is a favorite.

After literally about an hour messing around with the machine I made this sign:

Everyone makes a simple sign first.  I’m no exception!

And then everyone makes a little pocketed out tray! 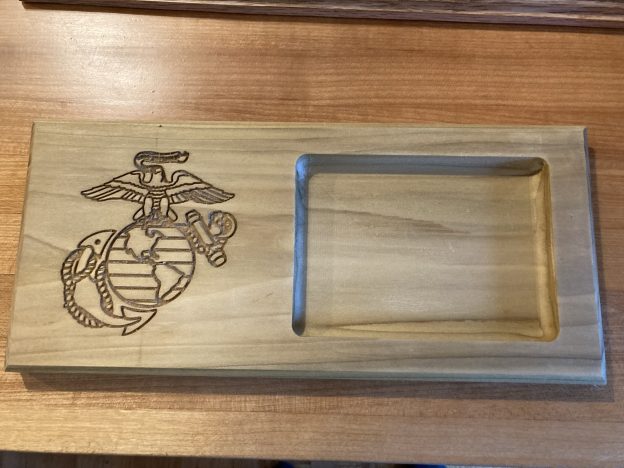 Next up I’ll do a file with bit changes.   The only problem is at the moment all my end mills for cutouts or clearing are 1/8th” (for the Sainsmart CNC) and the Bosch 1617EVS collet won’t hold them.  I either need 1/4″ shank end mills or an 1/8th” collet for the Bosch router.

SPEAKING OF BIT CHANGE ACTIONS………I had some idea how to do it however I wasn’t sure about getting a perfect calibration following the tool change.  My pendant has a button for zeroing out X,Y, and Z axis.  I know that when changing bits you want X and Y to STAY THE SAME…..EXACTLY, and that you are compensating for whatever change in bit length for the Z and that you really only want to re-zero the Z.  When I finally got around to downloading and running Ready2Update (the Shark firmware update tool) while reading the documentation I saw that, sure enough, a firmware update gets you a separate button for the Z axis zero.   PERFECT! 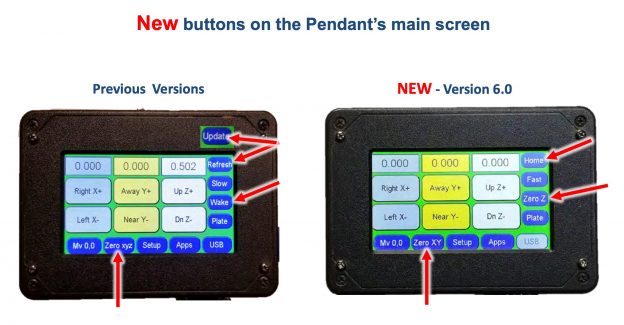 So, my machine came with NOT the latest firmware.  Let me explain how that PROBABLY happens.  I emailed Support at Next Wave and asked that if I bought a machine could I just go ahead and upgrade to Vcarve Pro.  The response was that I COULD, however, it would delay shipping because they would have to open the BUNDLE and insert the new software and then of course re-bundle it for shipping.   So there is un-purchased, pre-bundled stock sitting around.   If a firmware update gets pushed they aren’t going open the bundle just to install it.

NOTE:  There seems to be a bug in firmware version 6.1.0.5. If you turn on the machine with a USB stick in the pendant most, but not every time, it won’t boot and says there is a firmware incompatibility issue with the pendant.   If you remove the USB stick prior to boot it starts correctly and inserting the USB works normally.  A tech at Next Wave confirmed it was happening on his machine as well when I reported it.

Here’s my first crack at bit changes.  Two Toolpaths, number 1 with a 1/2 round bit to clear out the pocket, and number 2 with a 1/4″ end mill for the outside cut.  Worked perfectly as stated in the paragraph above.  It is made from 3/4″ oak with a round-over bit on the router table on the bottom surface.   Coated it with Butcher Block oil.  Looks beautiful.  Very simple but a logical first cut for a bit change test. 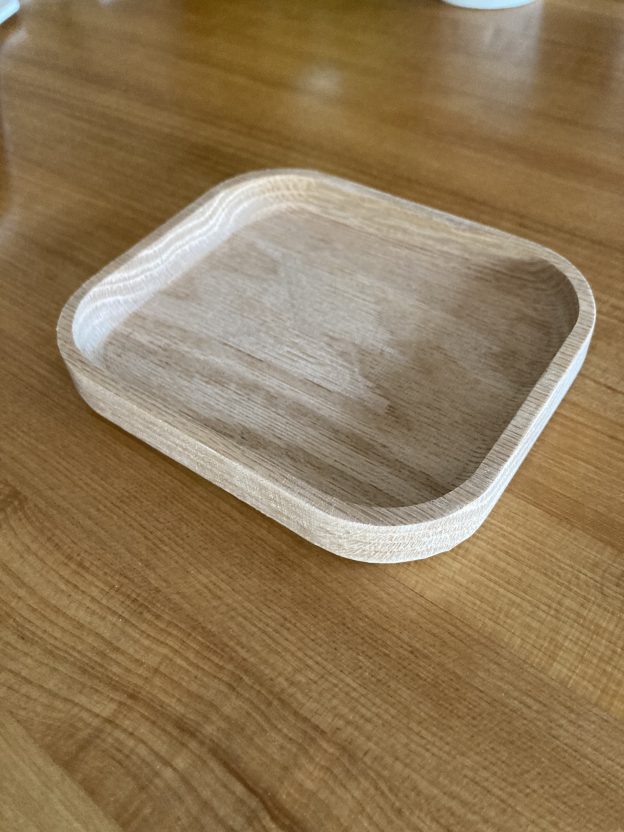 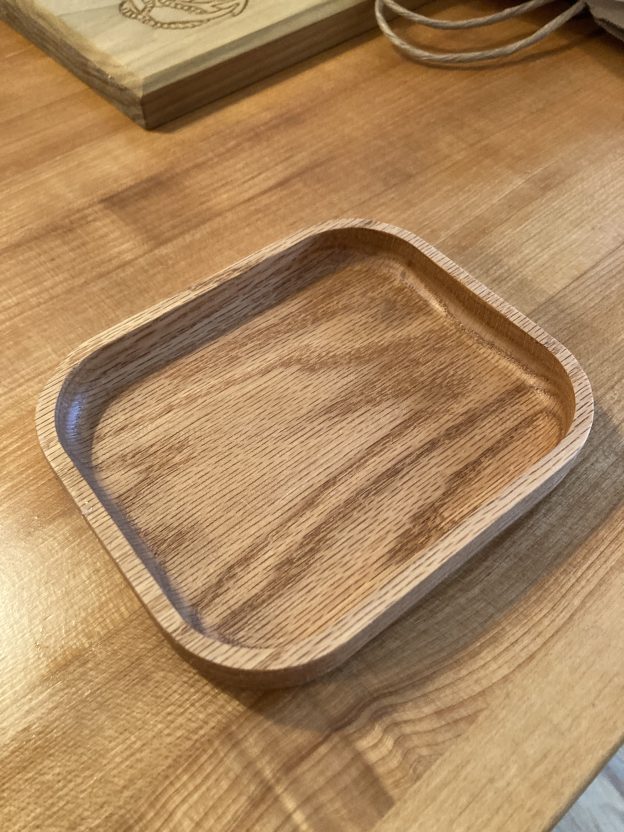 BOTTOM LINE:  I’m a “If it ain’t broke, don’t fix it” kind of guy, but this firmware update is a MUST HAVE. I recommend updating firmware in this order:

Moving on……..At any rate……..within an hour I had this big heavy machine assembled and did a test cut.  Here’s some build notes:

I’m sure that I will add to this blog or write additional ones on the machine as I get more time on the table.  I’m super happy with this purchase.  I had originally had my heart set on the Shapeoko 4 and the sticker price was a little cheaper UNTIL YOU FACTOR IN UPGRADED SOFTWARE COSTS, and then the TOTAL cost was about the same.  Don’t let sticker shock get you.  You are going to buy bits, a router, and software, and fastening systems……blah, blah, blah.  Pay attention to your TOTAL cost.  It does you no good to save $500 on a machine if you then have to buy $700 worth of software or you end up upgrading their crap software to the Pro version to the tune of several hundred dollars.  The fact that you get Vcarve Desktop WITH the Next Wave Machine absolutely has to be factored in.

Also there is no annual subscription to Vcarve Desktop.  It is stand alone software.  John hates web based software and software subscriptions.  Be like John.  Reject that business model.

Last thought.  The Shark HD Series CNC machines are head and shoulders in construction quality BETTER than many of the competitors.