I just did a blog on booting a Pi 4 Compute Module from an NVME drive.  I’ll provide a Build Of Materials (BOM) for duplicating this project.  Here are the primary components:

So for just over $300 you can have an amazing file server.  Also if you back off the 2TB Samsung EVO970 to a 1TB drive you can save $100 roughly.  You can buy a cheaper Compute Module as well IF YOU CAN FIND ONE. A 2GB one is fine for serving files. For around $200, or a bit less you can have a solid, and adequately fast file server.

So my CM4 was the CM4008000 which is 8GB of DRAM memory with no wifi or bluetooth.  This was fine for me as I’m connecting this directly to my ethernet switch.  Any file server should be wired if possible.

In this configuration you have to boot from an SD card initially.  Best way to prepare the card is with Raspberry Pi Imager. 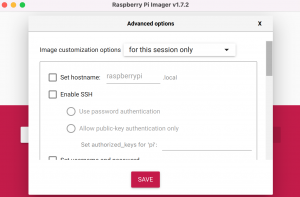 And the best way to do that is to open the Advanced Options menu and pre-fill your data.  You can set wifi settings as well (but I don’t have a wifi CM4).

Note that you can enter SSH information here.  This is invaluable.

Once you’ve pre-filled that information you then Choose OS and your Write Destination.  If your write destination is eMMC you will have to use a utility called RPIBOOT to make your CM4 eMMC memory visible to Raspberry Pi Imager as attached storage.

Before you boot from your SD card you need to go ahead and install your PCIe adapter with NVME storage installed. 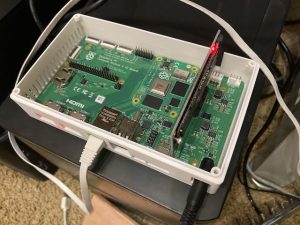 CM4 IO Board with PCIe Adapter and NMVE Drive

Now you can boot your CM4.  I do everything headless with mine which is why I set up SSH in the Advanced Options when making the SD card.

If you aren’t connected to ethernet at this point you’ll need to have a monitor, keyboard, and mouse connected.

But it is SOOO easy to do all this via SSH without all that messy attached hardware.

Anyway, however you do it click on the Pi icon in the upper left of the screen, then go to Accessories > SD Card Copier.  Copy your SD Card to your NVME drive and be sure to check the box that says, “New Partion UUIDs” 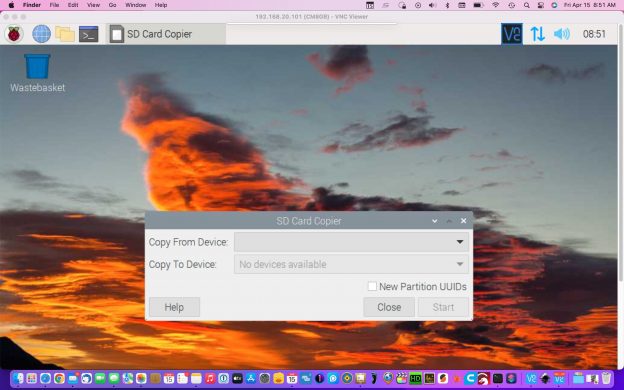 Once the copy completes you should be able to shut down, remove the SD Card and boot directly from the NVME drive.

If you have a CM4 that has eMMC memory you HAVE TO SET THE BOOT ORDER TO BOOT FROM NVME FIRST.  I covered how to do that in my previous blog.

Your Pi should be much faster with way faster hard drive read, write, and access times.  If you really want to zoom things along you can overclock.  The CM4 pretty easily overclocks to 2.0 GHz. But you’ll need active cooling.  I don’t like the noise and I’m not a benchmark geek so just booting from the NVME drive is fine for me.

I’d like to add that in this day and age you can buy a fancy computer appliance that is passively cooled, shaped like a little brick and very nice in general for about the same amount of money.  There is no disputing this however, next week can you turn that device into a SATA array of hard drives?  Nope.  The hardware won’t allow it.   Can you add a big giant sound card to it?  Nope, The hardware won’t allow it. Can you pop out the CPU and put it in a drone or robot or other embedded device?  Nope.  I guess what I’m saying is that the Pi Compute Module allows for a ton of flexibility and is somewhat future proof, at least a little more so than the aforementioned computer is.

Have fun trying to score a Compute Module 4 though.   It took me a couple of months to get three, with 2 of those being 2GB versions that I didn’t really want.  You take what you can get in this wonderful world of Supply Chain failures.