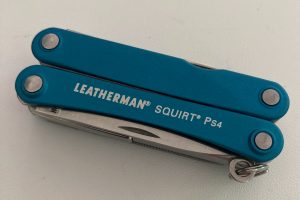 I love multi-tools but sometimes they need to be small.  Sometimes you’re in short pants, dress pants, or just holding a keychain, but you still might have to save the day.  There are only a few multi-tool choices and most of them are Swiss Army knives.  Some Swiss Army knives have pliers on them but they are tiny pliers that pull out of the body of the knife.   It’s tough to get a man grip on something with those things.

Also I need to say I swear no allegiance to any particular manufacturer.  EDC can be very situational.  I carry a Victorinox Classic SD on my keychain which is great for tiny jobs but lacks critical tools like a beer opener!

I really love my Leatherman Surge but it is freakishly huge and this blog is about portability.  It is about those times that you can’t carry the freakishly huge multi-tool.  And that really limits the playing field.  No real man would be caught dead without EDC tools though.

Your choice in a multi-tool is very personal and should be based around how YOU use a multi-tool.  But again, today we are talking about those situations where you need to be minimalist.

Enter the Leatherman Squirt PS4.  Pretty sure the “PS” stand for pliers and scissors.  The only other multi-tool worth a lick at this size point is the Gerber Dime. 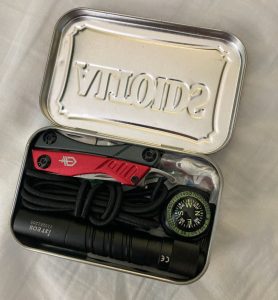 The Dime can be had for a bit cheaper but it just isn’t as good as the Leatherman.  I like to use the Dime in Altoids Tin Emergency kit projects.

I’m not sure about the current production status of the Gerber Dime or the Leatherman Squirt PS 4.  Both have greatly reduced prices.

That could either be for the upcoming Father’s Day Holiday or could be a sign that both are End of Life.

If that is the case maybe something newer and exciting is coming along.

The PS4 is just a bit smaller than the Dime, although not by much. 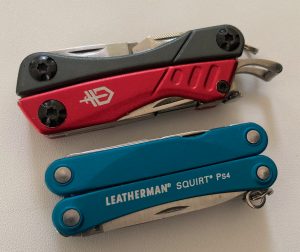 And when opened it is again slightly smaller, but not by much. 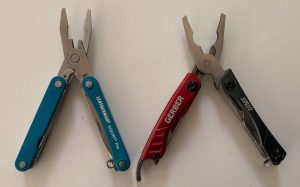 The bottom line though is the PS4 is much better made than the Gerber, but it costs almost twice as much more.  The old adage applies:  You get what you pay for.  Even though I’m not shooting for a comparison blog on the two, quite simply the Gerber Dime is crap compared to the Leatherman Squirt PS4.  Try to cut some wire or use the scissors on both.  You’ll very quickly see why I awarded the Dime the “CRAP” designation.

The PS4 has a sleek profile but the bottle opener looks not as efficient as on the Dime.   The Dime bottle opener sticks out though which is weird and sometimes uncomfortable. However, scientific testing has indeed revealed the PS4 bottle opener to be effective on at least beer bottles.

The main blade feels a tiny bit flimsy to me however the reality of you using this for much other than opening Amazon boxes or cutting paracord is minimal.  Or maybe cutting a steak at the campground.  It is fine for those kinds of tasks.  The file on the other hand is pretty robust.

There is no toothpick or tweezers which are things I frequently use when carrying a Swiss Army knife.

No need for me to count tools, explain what they do, and critique them beyond my general impressions.

For the reduced price you can get one for now, the Leatherman PS4 is a steal.  And it is small enough to be unobtrusive on your keychain.