I have several police scanners and if you turn them all on side by side you’d be amazed that some seemingly pull in more calls than others.  Even if they are configured identically.  Everyone wants to hear EVERYTHING.

There are lots of variables but essentially here is John’s Rule Of Police Scanners:

“The more stuff you try to listen to, the more likely it is you’ll miss more stuff. “

Even in sleepy New Bern, North Carolina there is lots to listen to.  And most police scanners these days have a zip code search.  Put your zip code in and it pulls in EVERY POSSIBLE THING from the RadioReference.com databases.  As your SCANNER tries to SCAN through that massive list it will be searching elsewhere when some call comes in on a system you actually want to hear, and it will miss it.  Some scanners allow you to set Priority on systems, so all is not lost……but then it becomes a lot more complex than just putting your zip code in.

Let’s talk about some things we can do to improve listening and hear more of what you want to hear.

I’m not sure it is even possible to catch everything.  And in some places due to encryption it may not be possible to catch ANYTHING.   So before you decide whether or not you want to invest in a scanner you better check if your local systems are unencrypted.   Mine are.

And since we are talking about INVESTING in a scanner let me say……..they ain’t cheap these days.  When I was a kid you could buy an inexpensive scanner at Radio Shack and plug a crystal into it and monitor analog channels.  Analog was all we had in those days.  Today there are multiple types of digital systems.  If your area has P25 Phase 1 or Phase 2 and your scanner can’t decode it, guess what?

And to add to the fray you can actually MAKE your own scanner these days with a Raspberry Pi (or any computer) and a USB, RTL-SDR Software Defined Radio.  I just mentioned Raspberry Pi because they are cheap.

A Uniden Home Patrol 2 scanner, which is actually a lower end in the capability range scanner costs………..$620 (suggested retail).  On top of that to get advanced firmware features you have to buy something called “Extreme Upgrade”. Wow!  That is serious cash.   I can BUILD a Raspberry Pi police scanner with free software for LESS than $100.

Let’s talk about why we WOULDN’T want to do that.

WHY I DON’T WANT A CHEAP SCANNER

I’ll use New Bern Public Safety as an example.  Let’s say I build a $100 scanner.  I have to program my software with the Talkgroups that the system I’m monitoring is using.  So I go to this webpage.  It lists the frequencies and talk groups.  There aren’t a lot but it would be tedious to enter these one at a time in your software.  To get cut and paste spreadsheet lists you have to be a subscriber to RadioReference.com

Anyway, either way……….what if I told you this was an incomplete list of talkgroups?  It is.   So if there are talk groups that exist, and they aren’t in your list………you’ll never hear them.  Also our system here locally has something called “Private Calls”.  You for sure would never hear those.

WHY I DO WANT A CHEAP SCANNER

How do I know that New Bern Public Safety doesn’t list all their active talk groups?  I know someone.   And that’s all I’ll say.

In my situation, where I know the complete list of talk groups, it is to my benefit to build a Raspberry Pi scanner.

WHY I WANT AN EXPENSIVE SCANNER

An expensive scanner such as a Uniden SDS200 can be set to do something called “ID SEARCH” and the scanner will search for all ID’s within the trunked system.  It may not label them, but you’ll HEAR THEM.  Then it has something called “Trunking Discovery” where it finds things not in the database and records 30 or more seconds of them and then you can try to label them yourself.  I found one yesterday and I’ll just kind of use a made up example below from a police stake out:

While it isn’t a 100% slam dunk guarantee that TalkGroup 10003 is Corrections ………..it’s darn likely.   And considering there were multiple cars following this person I’m guessing it was a Parole Officer probably with back up.  You can imagine a couple other possible scenarios as well, I’m sure.   Now with some certainty I can label this previously unpublished talk group.

MISSING TOO MUCH STUFF

The number of systems you want to follow is problematic as well.  If I track several large systems as my scanner is SCANNING through system 1 and a call comes in on system 5……..it won’t grab it out of thin air.  You’ll just plain miss it.

Listen to just the things that are important to you.  I basically just want to hear the Police so I track two systems.  New Bern Public Safety, and North Carolina VIPER.   There is plenty more to listen to but the more you add, the more you miss.   Ideally you could have multiple scanners and set them to monitor just one system.   Sounds good in theory until they talk over the top of one another.

One of my strategies is to wait until something interesting comes along……..I particularly like stake outs, following suspects, and manhunts.   When I hear one of those things I can press a button on my expensive scanner and do a HOLD on that system, that talk group or whatever I want to hold.  Then I ONLY hear the man hunt.

WHEN DOES ONE SCANNER EQUAL TWO SCANNERS?

I have that previously mentioned Uniden SDS200.  I bet you didn’t know it is TWO SCANNERS though……..Well, that is if you add some pro software.  Enter ProScan.  It is a paid software that is sadly, Windows only. 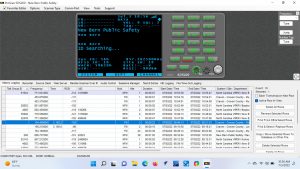 The thing I like best about ProScan though is that I can take one look at the History Logging tab and see, in real time, the Talk Group ID’s and System Site Names.  I can immediately identify Talk Groups that aren’t published, provided I have ID Search set to “On”.  And I can do all this without being tethered to the scanner via a USB cable and using the Sentinel software.  While I’m looking at the history that way I cannot listen to the scanner.

WHY DOES MY CHEAPER SCANNER GET MORE CALLS THAN MY EXPENSIVE ONE?

I don’t know the answer to that but my Uniden Home Patrol 2, that I bought used from someone at a good price almost always yanks in more calls than my super expensive, brand new, Uniden SDS200.  I have them configured essentially the same.  I have no good explanation as to why the lower end scanner seemingly outperforms the mega-bucks scanner.

You just never know until you do a side by side shootout.

It doesn’t really bother me though.  I’m not a guy who feels like I need to hear every single solitary call.  Hell, 90% or more calls aren’t even interesting.  My scanner is mostly background noise until I hear the word MAN-HUNT or ESCAPED CONVICT or something along those lines.

Anyway…….most people will regurgitate specs to you which don’t really help you make a buying decision.  I try to take a common sense approach to what works and what does not. I hope even one thing I wrote here is helpful to someone.