Analogy time.  The golden age of stereo was probably the 1970’s.  Vacuum Tube amplifiers ruled the audiophile roost while the transistor made it’s way onto the scene with gigantic receivers with beautiful silver faceplates and VU meters.  To this day I lust after giant boat anchor Pioneer and Sansui Receivers.

As it is in the world of tools.  Probably the golden age of hand tools was from the 1960’s to the 1990’s.  Things were robust then.  Men made buildings out of steel, and made in America appliances were built like tanks.   Cars were muscle cars.  Even the family car was substantial.  Powerful, and reliable hand tools were a necessity.  And everyone fixed their own stuff.

While I’m not saying that things today are poorly made, I am saying things are smaller, lighter, more electronic, and less repairable by and large.  People that need the most robust tools are in shorter supply.  Our love of inexpensive items made in China has affected the robustness of our tooling as well.  Walk into Lowes or HomeDepot and the tool areas are filled with inexpensive tooling from China that is cheap and becomes even cheaper around Father’s Day or Black Friday, or Christmas.

The internet is full of web pages comparing those tools.  I just watched one where someone welded a bolt to something and they used each brand of tools to the point of failure of either the bolt or the tool and then declared which tool to be the best.  While that is cool, 99% of the people who pick up a wrench or a socket are not going to encounter that.  90% of the people who use a screwdriver aren’t going to do much more than change the outlet covers to the new kind their wife likes.

Don’t get me wrong. I love quality tools and I want quality tools but I don’t need the best tools (anymore) and neither do you probably.   Work tools and Home tools are two different categories entirely.   But let’s find some middle ground, shall we?  Let’s get some really good tools at some really good prices and let’s build a dependable tool kit for around the house.  And let’s start with screwdrivers.

Screwdrivers are probably one of the most commonly used items around the house.  When I was a kid almost all screws were straight slot or phillips head.

It’s simply not that way anymore.  Buy a widget, any widget and it may have torx screws or square drive screws and if it has phillips head screws they are TINY.  Your kitchen junk drawer probably doesn’t have a screwdriver that tiny.  So you really should invest in a set of screwdrivers.  This is one place where I suggest where you buy it from and where to buy it new. 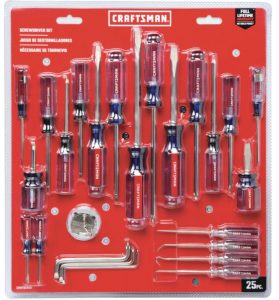 If you can afford it, get this Craftsman 25 piece screwdriver set from Lowes.

Cost is about $41 but I bet it can be had much cheaper around the holiday’s and shopping days I mentioned earlier.  And if you are young and just getting your start on life, recommend to mom or dad this would make a great gift.

It has a good mix of large and small screwdrivers, and even a few torx drivers as well.   There is an offset screwdriver and a couple of stubby screwdrivers and some picks or awls or whatever you want to call them.

Best of all there is a lifetime warranty that Lowes will honor since you bought it from them.  If anything breaks, take it back and they will replace it for free (provided they have it physically at the location). 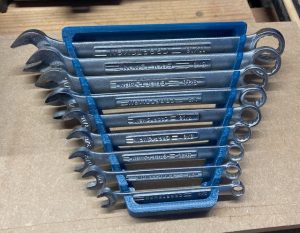 Next up……Combination Wrenches.  No shortage of these things at Lowes or HomeDepot.  There are literally DOZENS of brands of wrenches. Some cheap, some expensive.  But remember when I was talking about the Golden Age of Tools?  Here’s where I think you should buy used.  For the cost there weren’t many better tools for sale from 1960-1990 than Craftsman combination wrenches.

I found this set locally for about $30.  That’s a bargain.

And it’s very important that when you buy a set that the reverse side of the tools are stamped “FORGED IN U.S.A”. 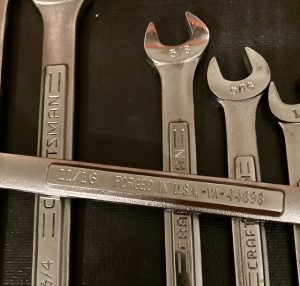 Manly men made their living with these tools and so did my father.  He wouldn’t use anything but Craftsman.  Here’s the best part about these wrenches

You can pick them up on eBay or Facebook Marketplace cheap……….AND THEY STILL ARE COVERED BY THE LIFETIME WARRANTY.

Granted you’ll probably get a Made in China replacement but those tools aren’t horrific, just the old Forged in U.S.A stuff is legendary.   Tradesmen used these tools all over to build this country.  The only exception to using Craftsman were auto and aircraft mechanics who loved Snap-On and Mac tools.   Hard to find them cheap though.  But you can find Dad’s old Craftsman wrenches all over the place for pennies on the dollar.   Here’s the ones I picked up for a song.  SAE 1/4″ to 7/8″ and Metric 8mm to 18mm. 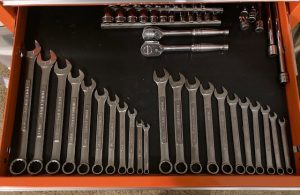 That’s a lot of wrench, for not a lot of money.  And if you have eagle eyes you will see the socket set I have in the same drawer is Snap-On.  Hey, I was an aircraft mechanic once.  God, knows those tools probably cost me a couple weeks salary though.  The Snap-On dude would take payments and he’d come around once a week.

Anyway, buy some Craftsman “Forged in U.S.A” wrenches but shop around and get them cheap.  DO NOT OVERPAY.  They are good, but not worth premium prices.  Don’t let someone tell you they are rare or collectors items.  They are not.

Not too long ago I built a small Tool “Go” bag and I wanted a socket set in the bag but sockets either come on rails or in kits, both of which were too big for my small canvas bag.  So I saw the local NAPA auto parts selling a GearWrench SAE and Metric 3/8″ drive socket set that has exceptional online reviews for TWENTY FIVE DOLLARS!  Sadly in the link that I just provided they are now on Monthly Special for about $29.  I just threw the sockets in two different zip lock bags and labelled them so they would fit easily in my tool bag. 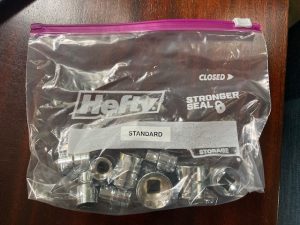 Gotta have pliers to round things out.   And this is the last of the tooling that a casual homeowner will probably need to invest in.  Not too long ago I went in Harbor Freight and bought set of 3 different size slip joint pliers.  They are crap.  Every time I use them I recognize them for the crap they are.

While it is tempting to tool yourself from Harbor Freight………just don’t.   Having said that though a lot of people do like their brands of Icon, Quinn, and Pittsburgh as it relates to screwdrivers.

Pliers are the one place where I’d say “spend some money and get good ones”, and they don’t get much better than Knipex, which you can buy from Lowes. I like these guys which are essentially slip joint pliers with crescent wrench ends, AND THEY LOCK.

They are not cheap but you’ll never buy another pair again in your life.  They do make more standard looking pliers as well which are also of excellent qualities.

So after reading this blog you probably think I’m a Craftsman fanboy.  I am not.   At one time they made remarkable tools at affordable prices in the U.S.A with the best return policy in the land.  One for one replacement with no questions asked.   They STOOD BEHIND their tools.  Craftsman was iconic.

Sadly I don’t think they are that way anymore but again the new China Craftsman tools aren’t bad and they still carry the lifetime warranty.  It’s nice to know you can always replace broken tools for free.

Personally, I like tools from Wera and Knipex.  I still love my old Snap-On sockets.  None of that tooling is particularly affordable.  This blog was about building your first tool kit on the cheap while you are just starting to strike out on your own.

As always, Your Mileage May Vary!