It seems like everyone is doing a side hustle from home.  With the advent of reasonably priced craft machines such as Cricut, CNC routers, and laser engravers, everyone is jumping into the game. This is a reasonably new phenomenon as well as desktop laser engraving machines have only been around a couple of years.  There is one notable exception.  The Chinese K40, CO2 laser. 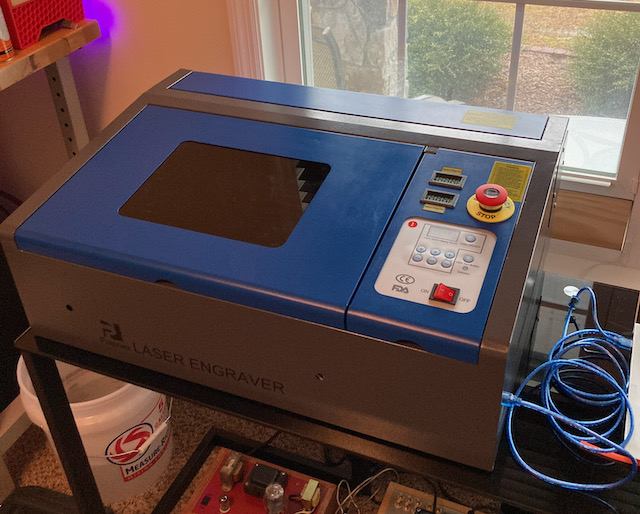 I personally think every laser side hustle wannabe should be forced to own one of these first.

Modern, refined laser engravers do much of the heavy lifting for you these days.  The K40 made you learn every single skill the hard way. It required a lot of tedious setup, and utilized a rag tag method of water cooling.

Early users had to draw their designs in Inkscape and the color of the line determined whether the software (K40 Whisperer) either engraved it, or cut it out.   Additionally, just getting that machine set up, and aligned taught the user vital skills.  The K40 forced you to learn the difference between vector and raster drawings.   Having dirty lenses and mirrors were anathema to engraving success.  DIY upgrades were often vital to keeping the machine operating within recommended parameters.  Jumpers were installed on the main board which defeated safety measures such as detection of water flow.  Wow!  I’ve blogged about much of this in the past.

I FEEL LEFT OUT BECAUSE MY MACHINES DON’T BREAK

With newer, and faster and much more intelligent machines and software it has enticed a whole new generation of users to the Side Hustle Table.  It seems like the new philosophy and workflow is this:

So how is it that after a few years, and more than a few machines that I have bought and sold that I haven’t realized any major failures?  Am I doing something wrong?

I actually am NOT advocating everyone go out and buy a K40 laser but I am advocating that you take the time to learn your machine and your craft.  Log in any laser forum and you’ll see users say, “I was doing the burn and the laser just stopped, what do I do now? I can’t afford to waste material”.

You cannot build a machine, engrave your name on a piece of wood and declare “I got this” and start burning on expensive lumber from Lowes or even worse…….Yeti Cups.

My father retired.  He went to an estate auction and bought a bunch of blade sharpening equipment on a whim.   He opened a small shop but before he took on the first job he called the manufacturer and asked about training.  Turns out they had an in house class that was two weeks long and he signed himself up and went to school.  He learned his craft first.  if memory serves me correctly he paid a couple thousand dollars for the class, not to mention hotels and meals,

We are lucky, though.  Our schools are mostly free and are mostly on YouTube or any number of web sites and blogs.  It is still important for you to teach yourself the capabilities and limitations of your machine before trying to make money. Start small and with the simplest and most basic tasks.  Very few people start making money hand over fist right away with their machines.

Then if they do “got this” and are making money hand over fist you see them a month later posting a photo of their cracked lens (that they never once cleaned).  Oh but they know they are supposed to clean it, so they SAY they cleaned it regularly and it just broke all by itself.   But a trained eye can see that the cracked lens has never been cleaned.  Or not cleaned enough.  Then they declare the machine to be a piece of crap because production is halted and they have orders to fulfill.

There’s a lot to know about laser engraving.

Each of those 3 systems is prone to failure and you as the trained operator should have a plan for each possible failure scenario.   Do you have a spare belt? A spare laser head?  A back up machine?

A new, complex machine with multiple subsystems and an operator with little to no training is really a recipe for disaster.   If you owned a company and had a machine that cost $1000, or more would you just point the minimum wage worker to the machine and say “You Got This”.  No.  Of course you wouldn’t.  You’d TRAIN them.

The trouble is when you are the only employee, and you are Employee Of The Month every month you tend to forget about training, and things like maintenance.

Take the time to learn your machine.  Watch lots of videos on your machine.  Not just the ones where they show you what’s in the box or how to put it together.   TEST the machine.   Practice using copious amounts of cardboard and scrap wood.  Don’t laser anything expensive until you have the fundamentals down.

That guy on the video who made it look easy…………..do you know why it looked easy?  Because he’s done it a million times and he’s probably ruined his share of Yeti cups.

Finally, here’s my personal favorite.  Someone with no practical laser use will chuck up a $40 Yeti cup and then get on the forum and say, “Somebody tell me the settings for a Yeti Cup.  I just got an order to do 10 for someone.”  They’ve never done one before and now have $400 worth of inventory and they are asking someone who may or may not know what they are talking about.  Another thing to think about is if I have a 20 watt machine, and you have a 10 watt machine………our settings are going to be different.  Please.  Don’t do this.