Just got my XHData D-808 the other day and was able to give it a good shootout the last few days. It’s a sweet little radio. It SHOULD cost about $70 from Aliexpress however the radio is available there but won’t ship to the US. I bought mine on eBay for slightly over $100 (which hurts me to do that) but it seemed to be the only available source that I could find. 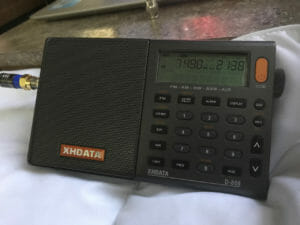 So with all that being said it shipped from Hong Kong and went to Israel, why I have no idea, and then it was reshipped.  It took about a month but I got it and it is in perfect condition.  God forbid I want to send it back though I guess.  I might not live that long enough to get it back

So I threw it in the camper and took it with me in the woods which gave me some time to get familiar with it.  One of the first things I always look at with a radio is the LCD, because, hey, that’s generally the first thing you look at to see what information is displayed. Most radios have a kickstand on the back which causes the radio to be at a weird angle for viewing usually but keeps it from tipping over as most portable rectangular radios are top heavy ESPECIALLY with an external antenna hooked up.

The LCD here is GREAT ……………. until you tip it back.  Then you see a bunch of digital 8’s and garbage.  Beautiful display head on. 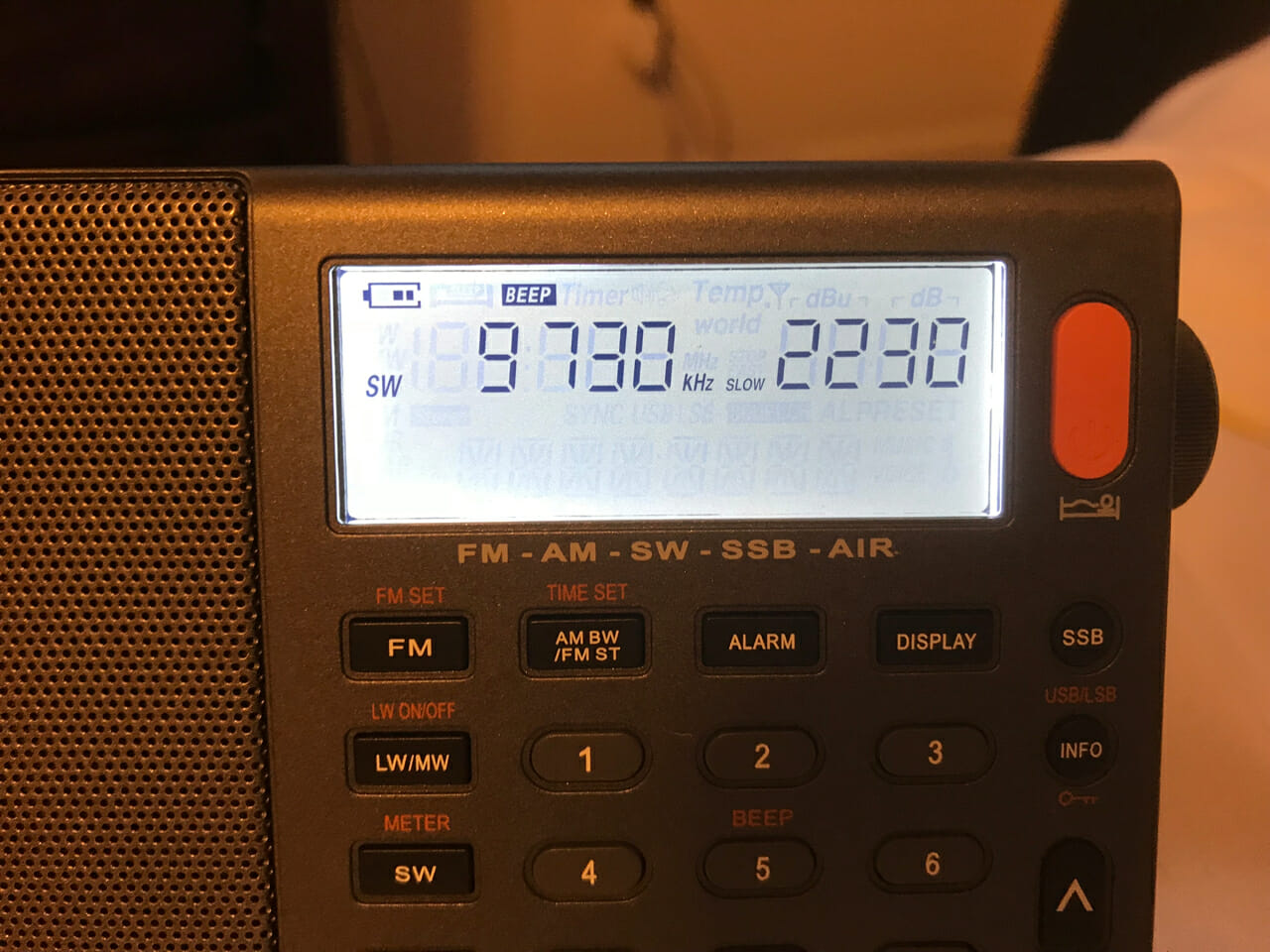 Not so beautiful at a viewing angle.  Yep that is the exact same screen as above. 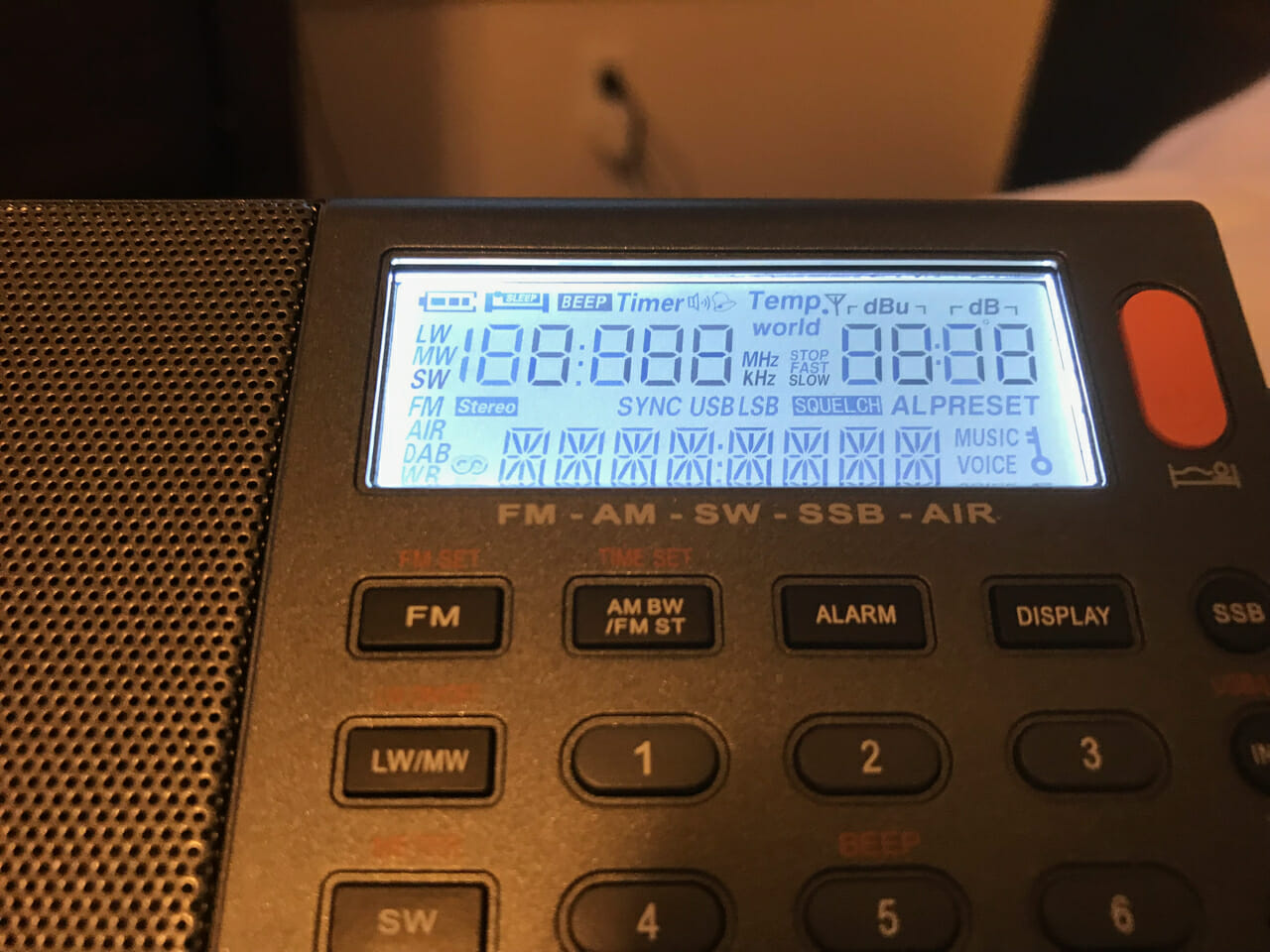 So plan on having to look directly at this thing when doing any serious tuning.

The keypad is laid out very intelligently and nothing really threw me for a loop.  Some radios have bizarre ways of doing things.   I have to say this radio is pretty intuitive to use. 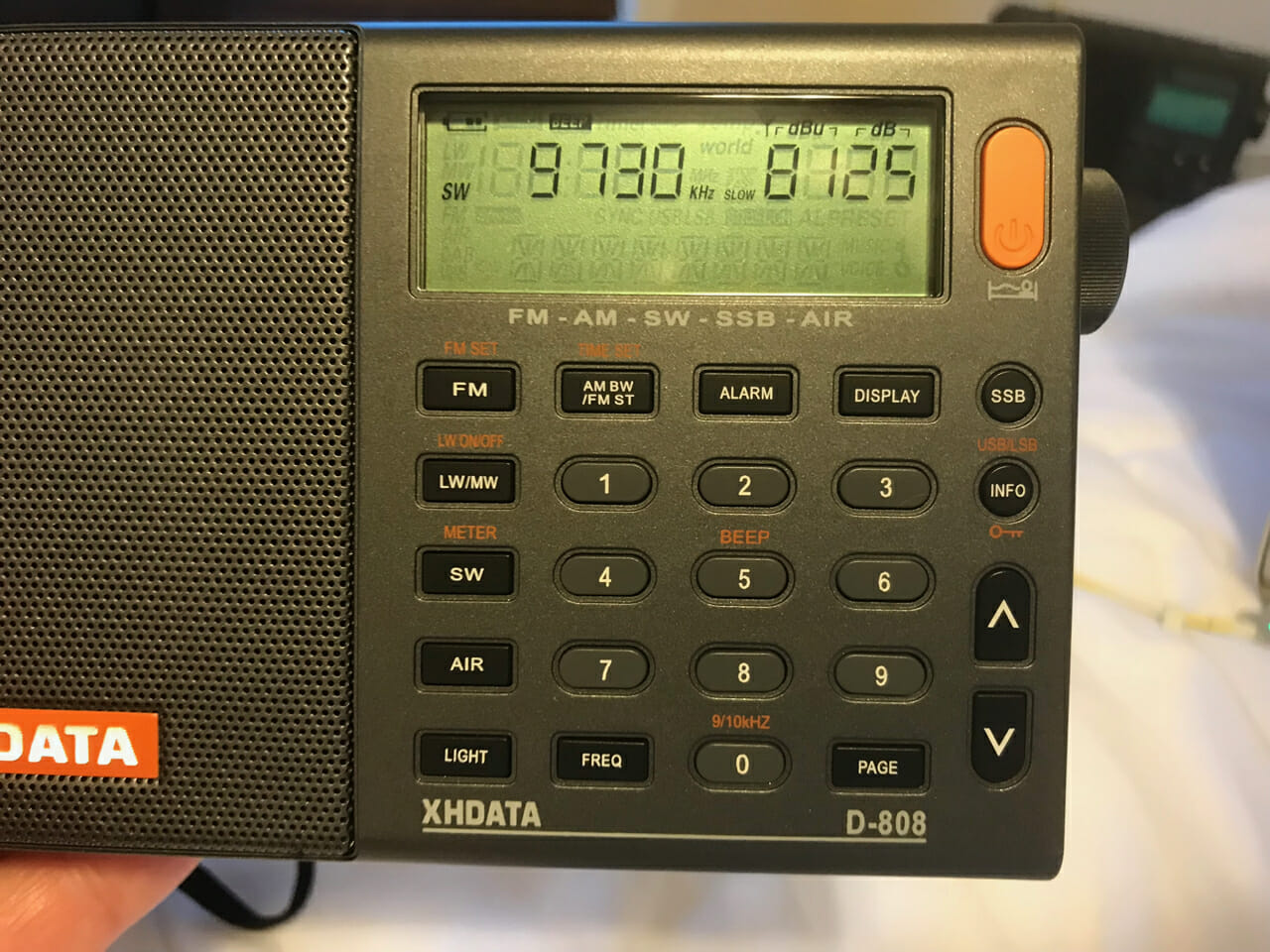 Well, it is intuitive to use except for one thing.   The location of the volume control.    The tuning knob is on the right side of the radio as it is on a lot of radios and the volume control is frequently just below it.  Hey it is a right handed man’s world. 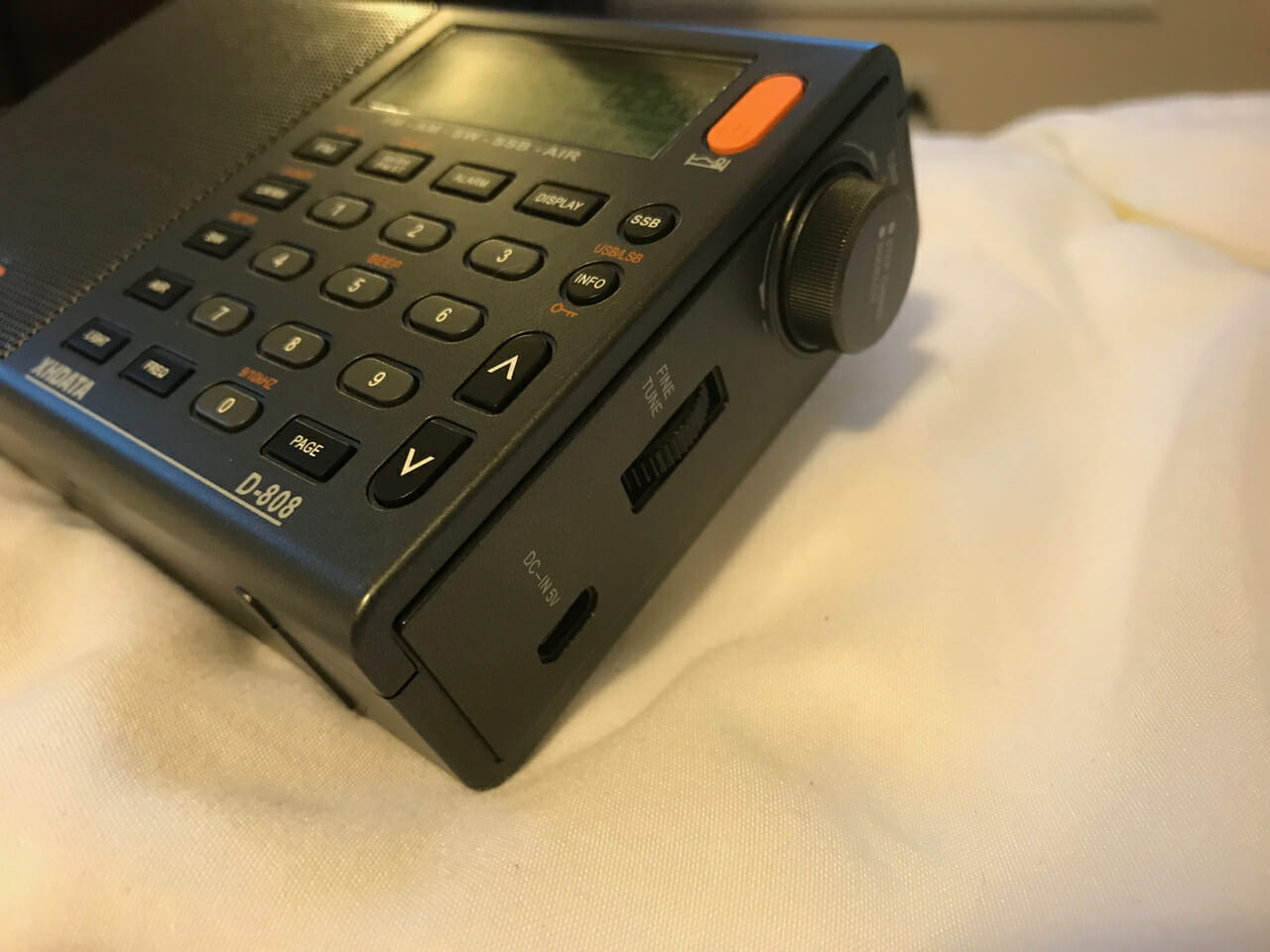 The volume control is on the left side.  I cannot tell you how many times since I have had this radio that I have changed the channel when going to turn the volume up or down. 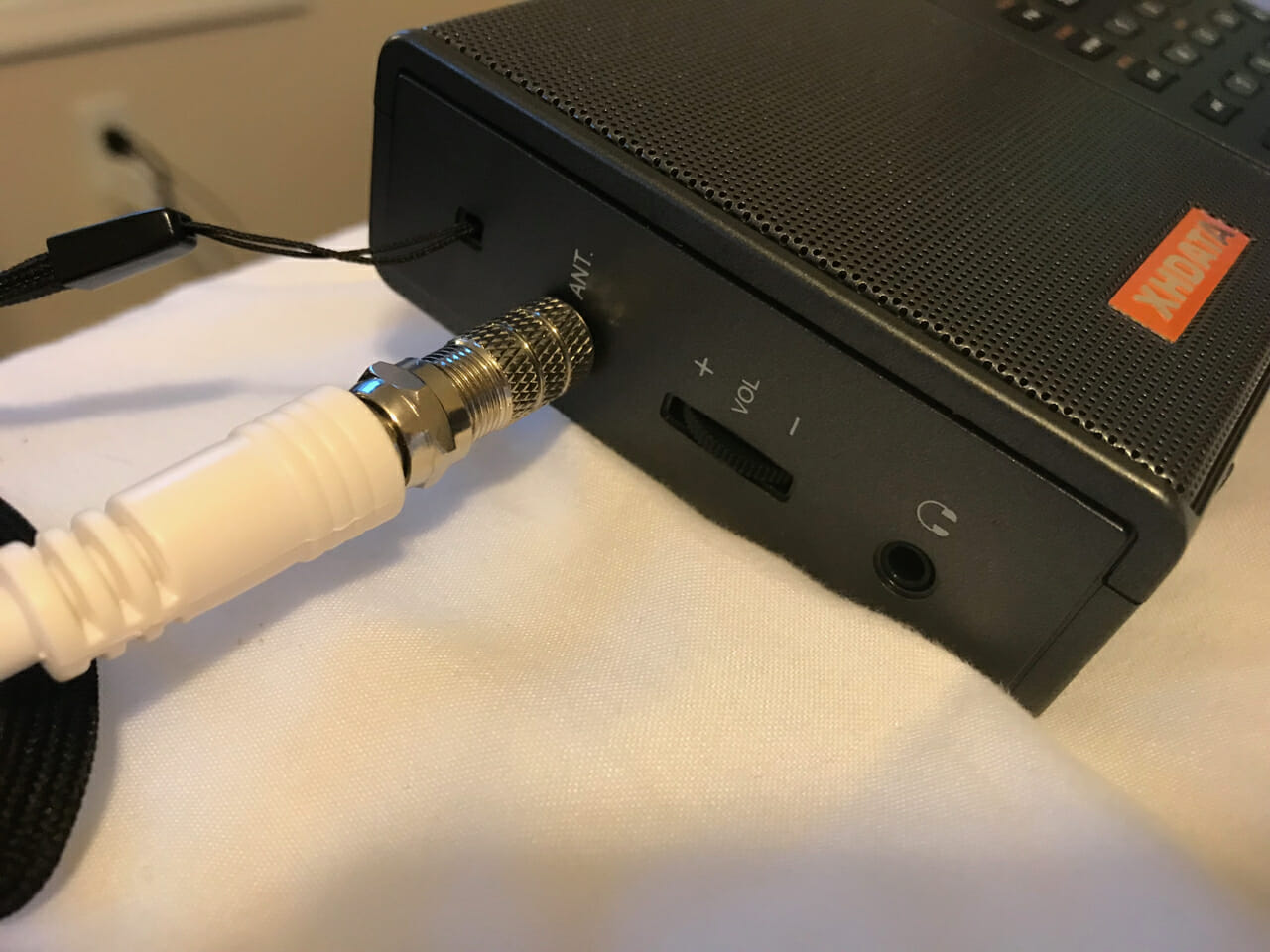 And as depicted in the photo above there also is an external antenna connector.  It works great on SW and the manual says it is for Air Band as well.  Best I can tell it does nothing for MW.

The earphone jack doubles as a dedicated line out. BUT when you plug in a 1/8th” jack to pump the audio into your computer the audio SILENCES.  You can’t hear the audio that you are recording.  That sucks.   Ok so there is a line out feature but it is crippled in my opinion.

This is a really good radio.  Really good but the line out issue and LCD keep it from being a really GREAT radio in my mind.

At the end of the day though you want a radio that works, sounds decent, is intuitive and suits your style.  This radio does all that.  I hate to be the knit picker and say “I wish this were better” because I kind of hate that about some reviews but I’ll break my own rule and say it here.

Should you buy this radio?  Sure.  Why not?  It’s built well, sounds decent and has that Air Band and external antenna and the kinda sorta line out.  A lot to like for $70.  Wish mine cost $70.