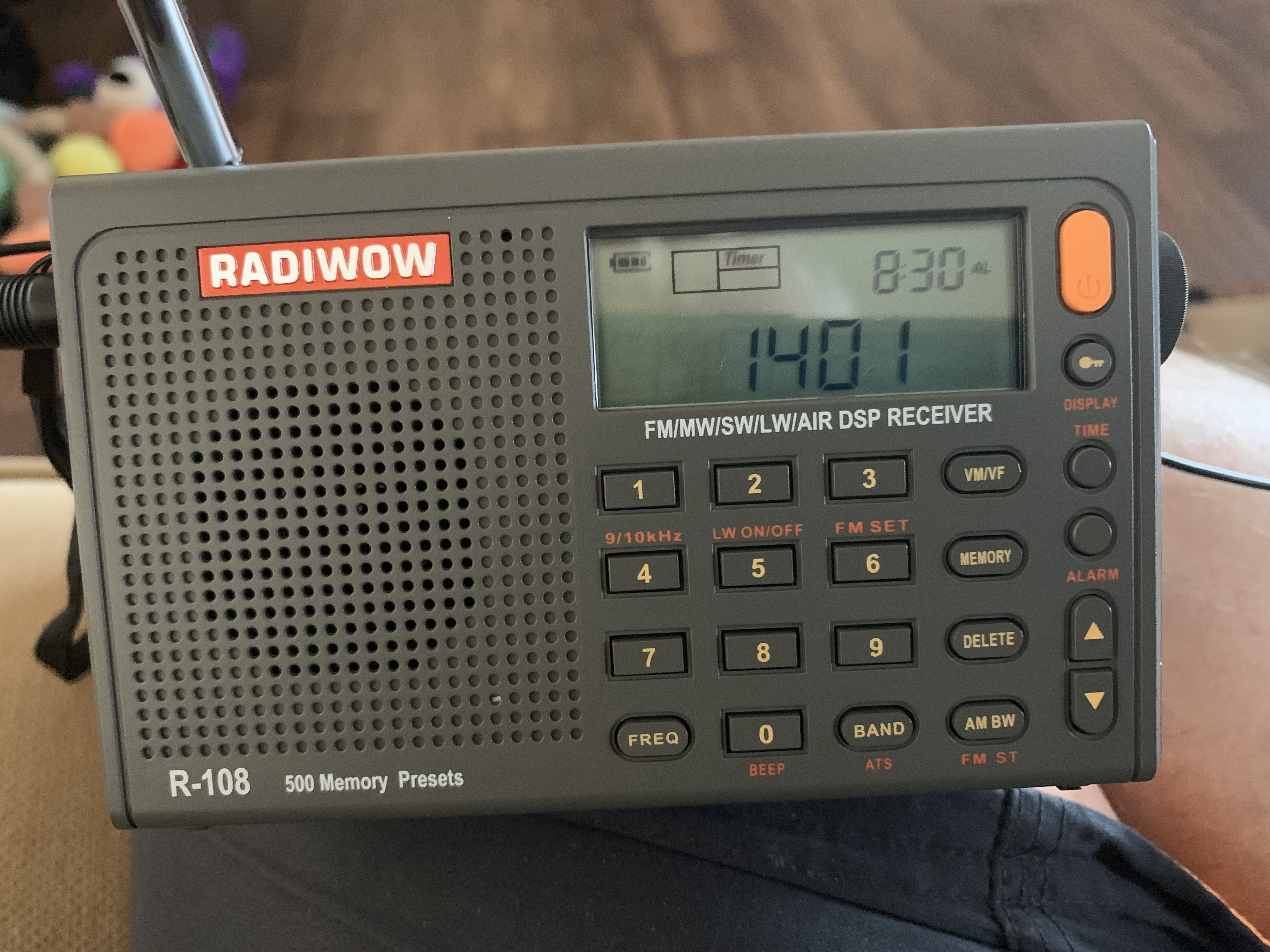 You can never have enough radios I always say.  I’ve seen the radio in question here around since 2018 or so but initially it was a buy from AliExpress only kind of radio.  It since crept over to Amazon and I recently decided to pick one up even though the last thing I need on planet earth is another short wave radio.

I have maybe 20 or 25 radios (I’m scared to actually count).  That being said I do actually break them all out and use them from time to time so they don’t just totally collect dust. I do use my gear.

Before I buy I always read the reviews, all of them, but I am convinced that there are one or two REALLY valid review sources and everyone else’s reviews parrot those sources.  Then I almost always find that my radios never perform in the same function as ANY of the reviews.

Case in point.  Sangean ATS-909x.  Read a review and they’ll tell you it is DEAF.  Can’t hear anything.  My 909x is a WORKHORSE and pulls rotten, tiny little signals out of the ether. I love my 909x.

Anyway this review is about the Radiwow R-108 which I paid about $51 for.  In comparison, most short wave radios about this size and form factor go for about $40 to $50 or so and that puts it about on par for other short wave radios.

The Radiwow though does AM, FM, SW, and it does AIR Band.  That puts it way on par above the others. Personally Air Band kinda sorta excites me because I work in the Operations Building at MCAS Cherry Point and recovering aircraft is our job.  There are times when the job is interesting and being able to easily listen to ground and tower chatter is a great enhancer to the job.

In comparison one of the only other radios in this size and form factor to do AIR Band is the CCrane Skywave SSB which costs $170.  The CCrane does NOAA Weather band and Single Sideband (SSB).   The Radiwow DOES NOT do NOAA Weather or SSB.

Another thing the reviewers say is “THE RADIWOW SOUNDS GREAT”………..Mmmmmmm, okay.  It has an inch and half speaker and while I will go out on a limb and say it sounds good, and possibly better than almost all in class ………..the word GREAT is stretching it.  It’s a freaking portable radio.  But it does sound pretty okay.

One of my make or break requirements for a favorite radio is an external antenna connector and the Radiwow has one. 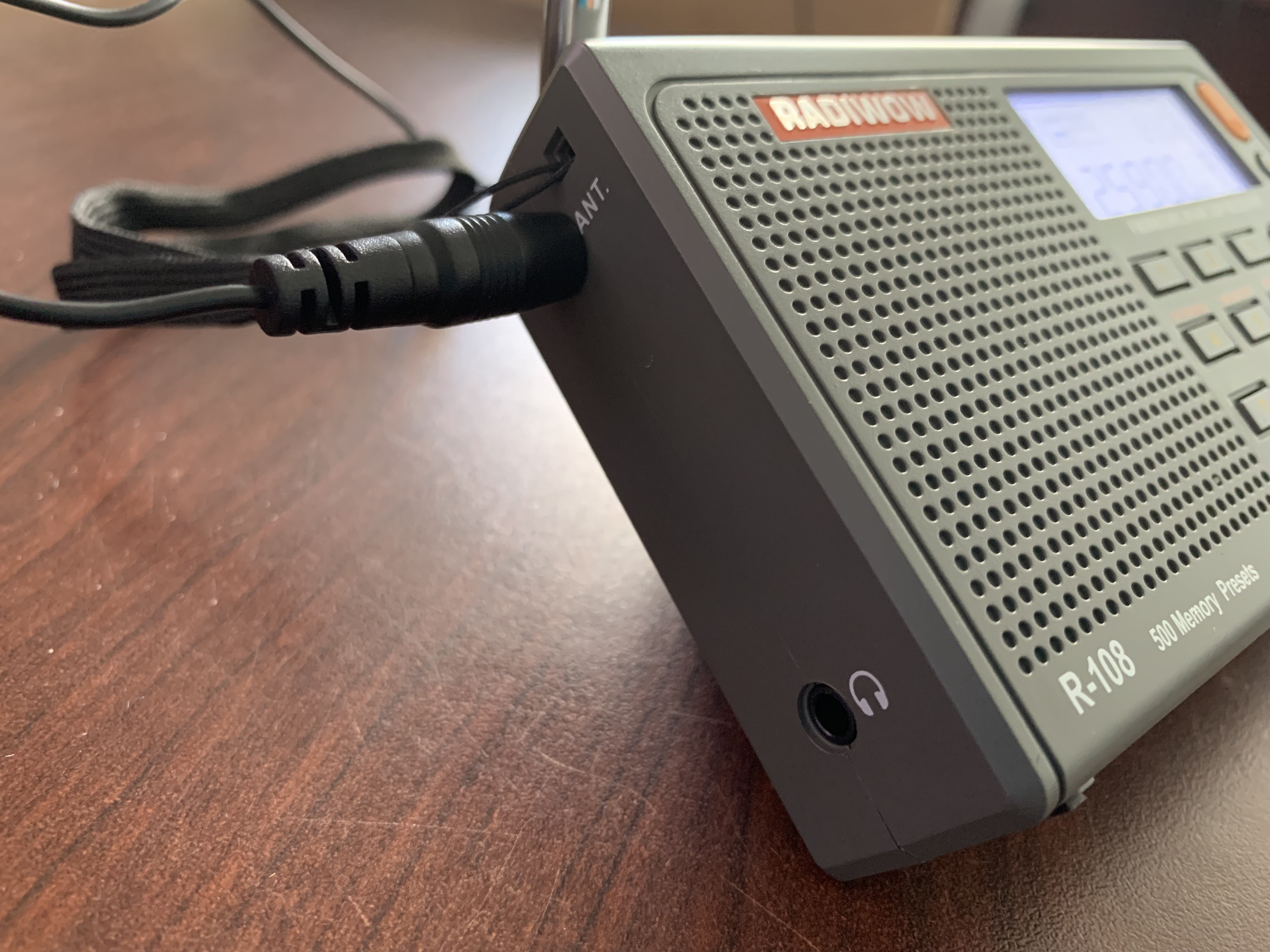 The other feature I love is a dedicated Line Out.  I use the Line Out for recording.  Sadly the Radiwow does not have one but it does have a headphone jack.  Some radios lend themselves somewhat to slapping a cable into the headphone jack and pumping it into a computer and software like Audacity.  To be honest I haven’t tried it yet but I don’t hold much hope that it’ll work great.

UPDATE:  I hooked my Radiwow up to a USB sound card on my Mac and pumped audio into Audacity.  Worked like a CHAMP!  And the volume control works great to control the audio level going into software.  So it isn’t a dedicated Line Out ……….but……….you can capture audio with it just fine.  I stand corrected.

To me Short wave is an adventure and sometimes you hear something so weird or bizarre or interesting that it deserves to be recorded.  Having a dedicated Line Out is an amazing feature.

So now lets talk about performance.  I live in New Bern, NC and to be honest Short Wave listening ain’t that great way out here on the East Coast.  In fact of all the similar, form factor radios I have …………NONE OF THEM RECEIVE ANYTHING IN MY HOME THAT IS LISTENABLE TO WITHOUT AN OUTDOOR ANTENNA. This of course leaves out any radios without an antenna jack.

So imagine my surprise when I turn on this Radiwow radio in my home and hook up the included long wire antenna INDOORS and this happens:

WOW. RADIWOW!  Not only that but it snagged some other channels as well.

So the real test is to take this radio to work.  When Faraday received the inspiration for the Faraday Cage he musta been inside my building at work.  No radio signals of nearly any kind penetrate this Cage.   So I turn it on, hit scan and start working because I know it’s just going to scan in a loop over and over silently.  WAIT!  It stops on 7.490 MHz and grabs a channel!  No way!  Way.

Another thing that impresses me about this radio is it comes with a rechargeable battery which is charged by a Micro USB cable which is also included.   Oh how I hate radios with AA batteries. Yes I know they have a place, especially when you are in the field but I’m not in the field that much.

Controls are INTUITIVE.  Lets face it, some radios you CANNOT do anything with because the 4 button is also the alarm button but it doesn’t really say it is or other ridiculous things like this.  This radio is well labelled and I’ll say it again, intuitive.

While I am a technical guy and specs and things of that nature appeal to me ………….. they don’t appeal to me at all with radios.  Does my radio work, does it sound okay, can I use it, can I see the dial……….those kinds of things matter to me.

For almost all things considered THAT I LIKE……….this radio is a winner.  Yes, I wish it had a Line Out and I really, really wish it would have come with a cheap little case or sock to transport it in as it is made from that easily scratched plastic stuff.  The stand on the back that props it up at an angle feels kinda iffy as well.

I think if you get one of these radios you’d be surprised how well it yanks down radio stations.  Quite frankly I’m stunned.  I don’t care if you hook it up to a Martian Oscilloscope and start measuring all kinds of stuff and telling me the radio is ……….gasp………..deaf………….I’m here to tell you that IT IS NOT.

I’m impressed and small portable short wave radios do not impress me much.  In fact I don’t much care for my Tecsun PL-310T or my CCrane Skywave SSB at all.  Yeah, they’re okay on paper but they really don’t work that well in my opinion.  This Radiwow works well for how I like to use a radio and more importantly for WHERE I like to use a radio.  Your geographical mileage may vary.