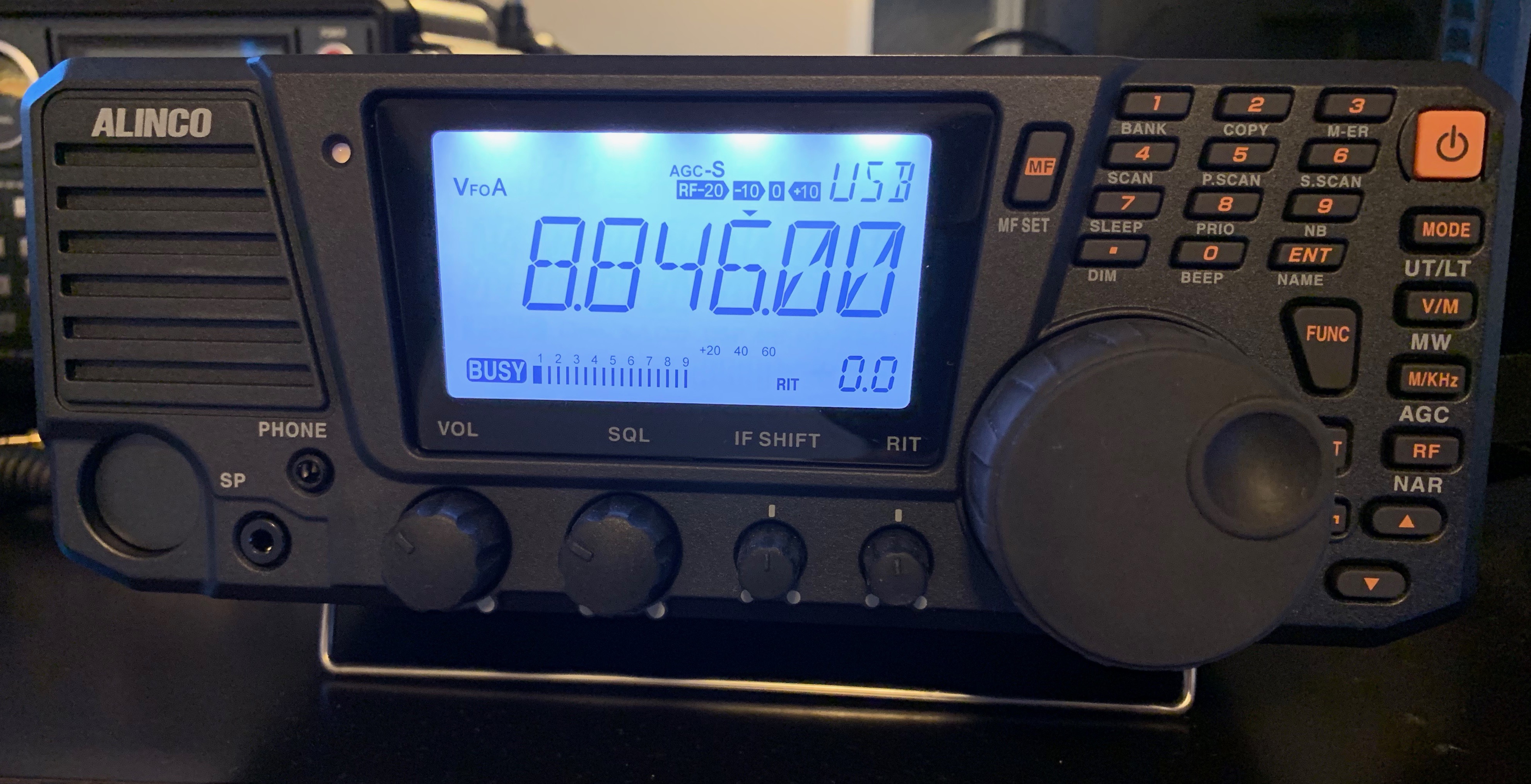 First of all let me say that I own just about 25 portable shortwave radios and probably almost as many SDR radios.  I absolutely love shortwave listening.  I also love the various modes on shortwave such as DRM, WeFAX, Numbers Stations, etc.  Also you never know what you are going to hear.

Somewhere along the line I decided I wanted to get a dedicated tabletop receiver.  Some of the old military grade stuff really intrigues me.  Some of that stuff costs big bucks.  The government seems to have pretty high standards for HF radios and that type of radio is highly desirable.

I also looked at various used radios like Kenwood’s ICOM’s and Yaesu’s.  Boy oh boy I wanted them all.  In the end though I’m one of those guys who likes brand new stuff.  The more I looked around and the more I researched the more I realized that the Alinco DX-R8T was well priced in comparison to other new tabletop radios and pretty deep in features found on more expensive models.

Not only that it is SDR based and can be used with a computer.  More on that later.

I bought mine from Universal Radio for about $430.  Again this is a good price for a base station receiver.  There has to be a gotcha, and indeed there is.  There is NO POWER SUPPLY INCLUDED.  Also the FTDI cable you need to make the radio work with the computer is NOT INCLUDED.

The DX-R8T needs basically a 12v to 13.8 volt regulated DC power supply.  They’ll sell you one but I just happened to have a power supply laying around at the house.  I’m using this one from Amazon. It only set me back about $20 and it works fine although sometimes when the fan kicks in it is a little loud.

Also this has an PL-259 connector on the back.  I had to get a PL-259 male to Female F connector just to hook it up to my homemade dipole antenna.

So there is quite a bit of stuff you need to get rolling that is NOT INCLUDED.  To be fair they are very up front about what is included.  So I received my radio, unboxed it and set it up.  First observation:

Took me a trip to the manual to figure out I had to punch in 9-DOT-5-7-0 then Enter to get the channel.  First hurdle overcome!

THERE WERE SEVERAL OF THOSE MOMENTS!  In fact I would say it took me two days or so (not constant days) to defeat the learning curve.  So now what are my initial impressions?  They are that I LOVE THIS FREAKING RADIO!  I feel like the reception is better than with any portable or SDR on the same antenna.  Also with SDR’s I tune to the visual signal and with this radio tuning by LISTENING I’m surprised at how many signals are buried in the floor noise and this radio pulls that stuff out of the muck.

Then I’m tuning backwards past 9MHz on my way to 7MHz and start hearing loud SSB chatter around 8.8MHz.  I stop and investigate and it is Trans Ocean Aircraft Communications.  Aircraft use HF radios for LONG RANGE transmissions.  I have NEVER HEARD THAT BEFORE.  I knew about it but never actually heard it.   So I feel like the DX-R8T has introduced me to something new and exciting on Shortwave.

So now I’m doing some serious DX-ing, I’m hearing things I have never heard before and I’m generally excited with this radio.  I’m learning the controls, I’m mastering tuning, I’m really coming into my own with this radio and now it’s time to hook it to a computer.

First and foremost as I mentioned earlier that cable you need to pull this off is NOT INCLUDED.  The ERW-7 cable that you need costs about $50.  I have ham radios that have FTDI cables that cost $5 so this is beyond ridiculous.   I found a guy on eBay that sells (presumably homemade) cables for $27.  That’s still steep but it isn’t $50.  I got the cable and it looks professionally made and IT WORKS so I saved a few bucks.

Right after that there is nothing intuitive about getting this working.  You need to plug in the drivers and let them install.  With an authentic cable with a NOT fake FTDI chip the Windows drivers will load up just fine without additional software.  Also nowhere in the instructions does it actually tell you where to plug the damn thing into the radio.  It goes into the Clone port.  I’m sorry that is NOT intuitive at all.  Then it is at this point I figure out that you need to pump the audio from the radio out of the IQ port into your computer.  So you need a shielded 1/8th inch connecter on each end of a cable.  Then you have to put the receiver into IQ mode.  I did it but I swear to God I couldn’t tell you how I did it.  Putting the system into USB mode and pushing FUNCTION key and then Mode again did it, I think.  I dunno.   Anyway I get it working! 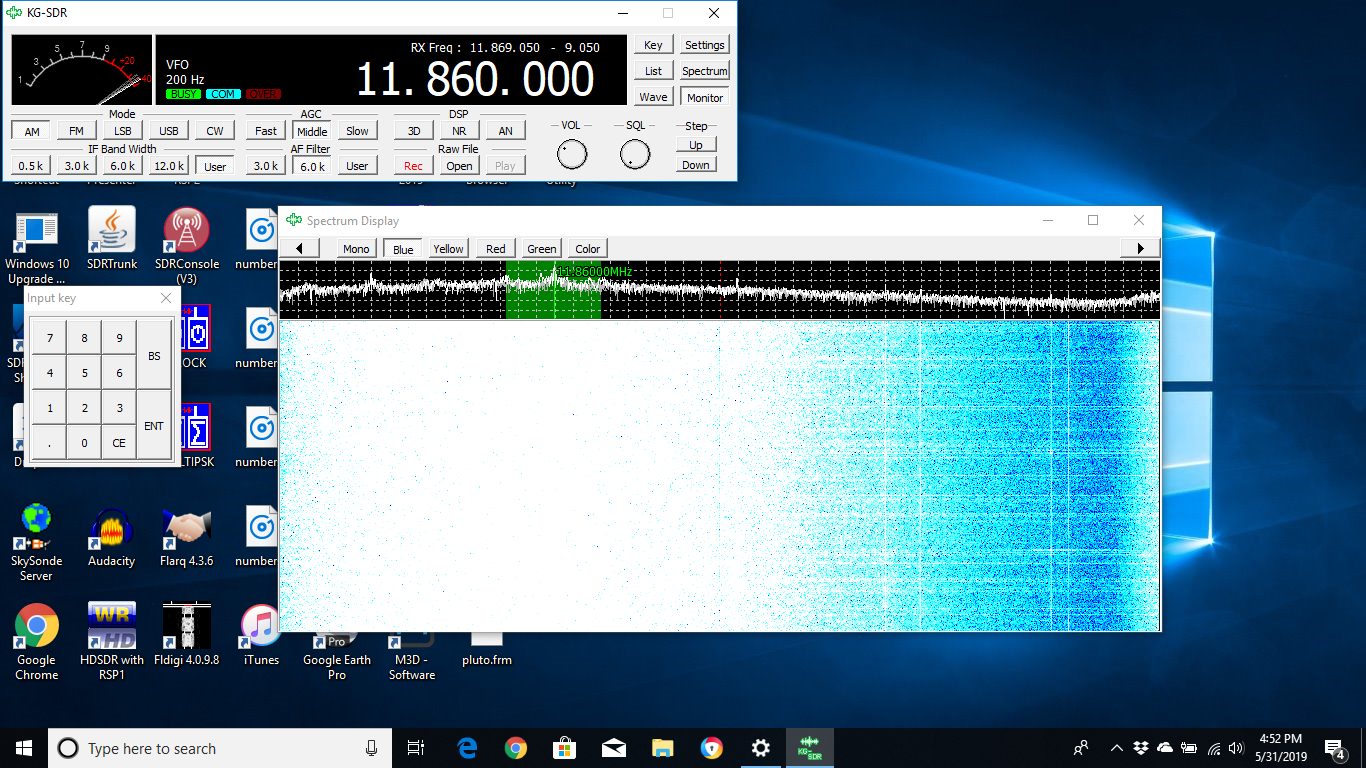 Somehow I got it working.  Now lets talk about it’s usefulness.  It uses a program called KG-SDR.  So once it all is working correctly I start using KG-SDR and quickly come to the conclusion I’d rather drink Mexican Tap Water or marry Nancy Pelosi, OR BOTH, than to use the Alinco DX-R8T as an SDR.  Every single SDR I own on every other piece of software is MUCH MORE USEFUL than this.

I won’t dwell on this and your mileage may vary but I don’t like this at all.   My blog, my opinion. Save yourself $50 for that cable.  Don’t buy it.

NOTE:  I should add that if there ever is a firmware update (mine has firmware version 2.03) that you would indeed need the ERW-7 cable to perform the update.

Ok, I have a few cons here but they are mostly related to SDR or what is not included.  Other than the learning curve (which you’d likely have with any radio) this radio is HIGHLY RECOMMENDED!  I love it, I’m keeping it and I’m going to use the heck out of it.