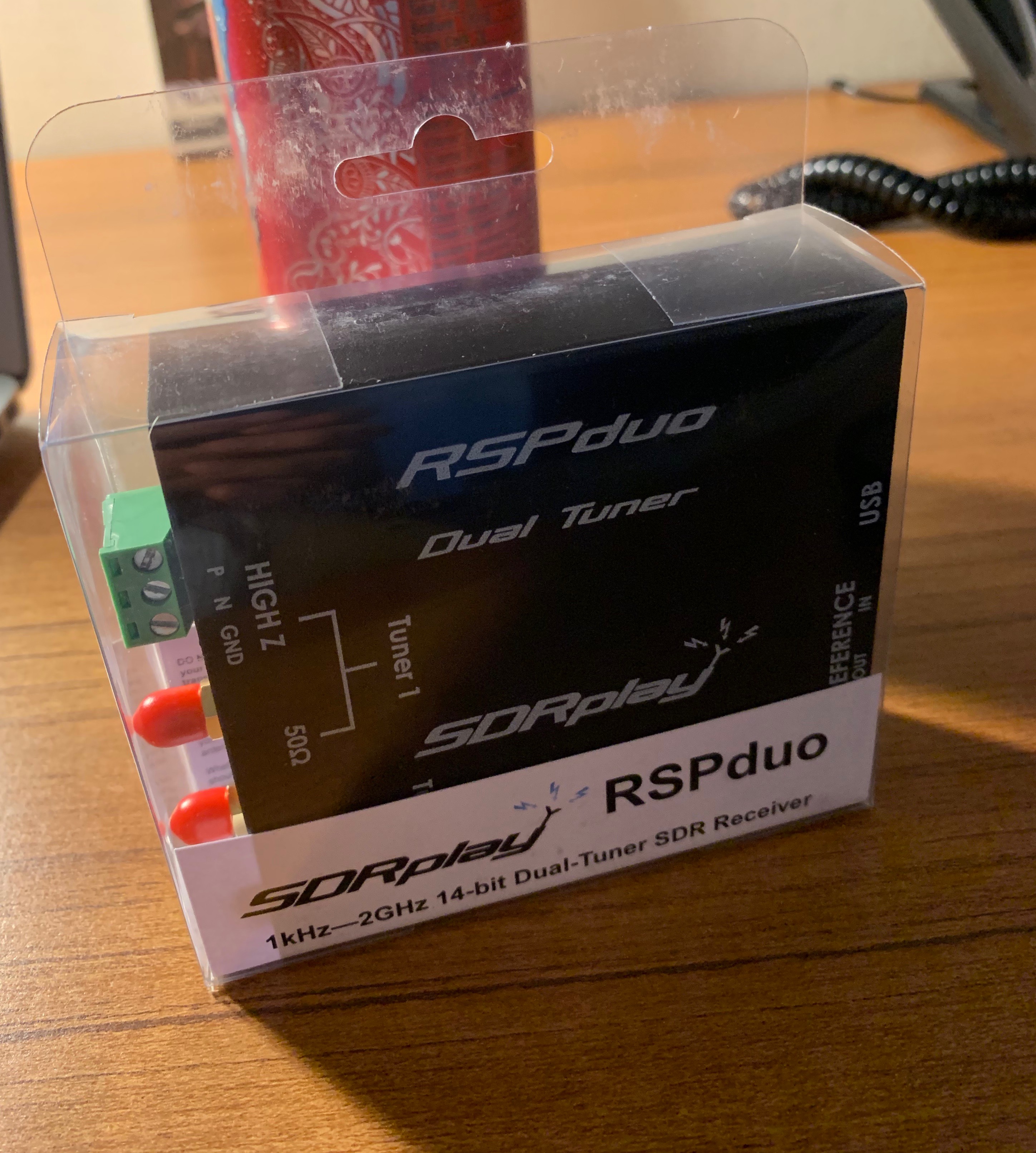 That’s what I do.  Sue me.   Just kidding.  Anyway at the end of the day about all you can do is use the RSPDevices on CubicSDR, which, don’t get me wrong, is okay.  Or GQRX which is also okay but you just can’t power punch it like you can with SDRUno.  And I’ve found having RSP, LimeSDR, and PlutoSDR on one Ubuntu laptop is a very foolish thing to do.  And now I’ll stop complaining about Linux stuff.

Let me tell you what I do like about RSP devices…………Zero to about a Trillion Gigahertz with one device!  Okay I exaggerated a bit.   I travel a lot.  Carrying around up converters and cables is a hassle and while a V3 SDR will do HF it’s not as good as an RSP or a dedicated up converter.

Having the ability to do the phenomenal frequency range with one device AND TO DO IT WELL is unbelievable.  A virtual Home Run.

But for the Love of God please release the SDRUno for Linux!  Actually I have heard that SDRPlay is doing just that.  I will patiently wait and write glorious things about you when you deliver that up.

Okay, I’m stuck with Windows when using my RSP devices.  I get it. I have a MacBookAir and I can run some Virtual Machines but SDRUno on a USB device on Windows 10 on the Air just does not run very well.  All choppy and stuff. So you really need a powerhouse laptop to pull this off. I should add that NOTHING runs that well, not just SDRUno.

So I (this is tough to admit) do have a Windows Laptop that is an i5 with 8 GB of RAM.  Uno runs like a champ on it. I also own a Vinyl Sign machine and all the really decent Sign software is Windows only.

So I get my SDRUno installed and updated to the latest version as of this writing 1.32 and hook up the RSPDuo. (Yes, the pic below shows v 1.31…….older screenshot but it serves my purposes here). 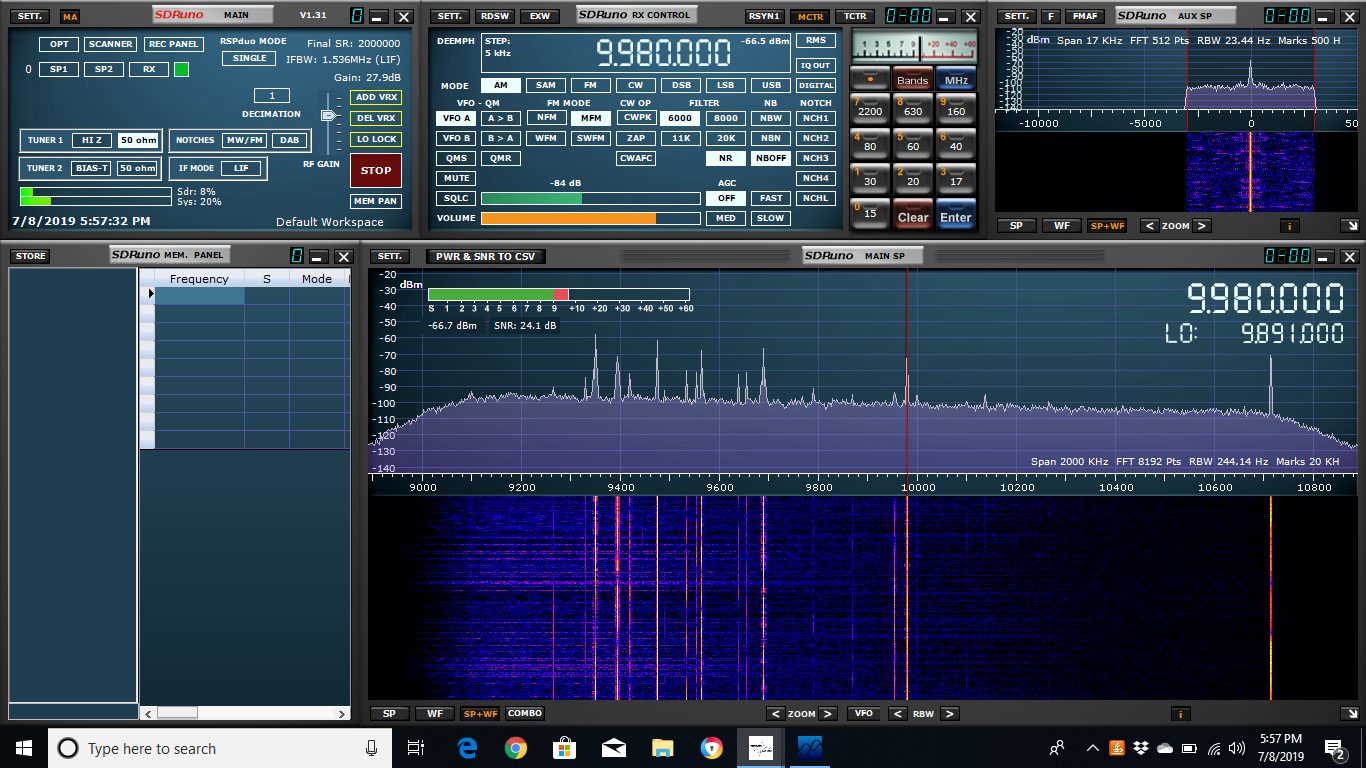 One of the most interesting aspects of SDRUno is that you can use both tuners at the same time.  I find this SUPER USEFUL for testing antennas.  I have two loop antennas and I can point one of them one way and the other some other direction and see which one performs better.  You can set that up as per below. 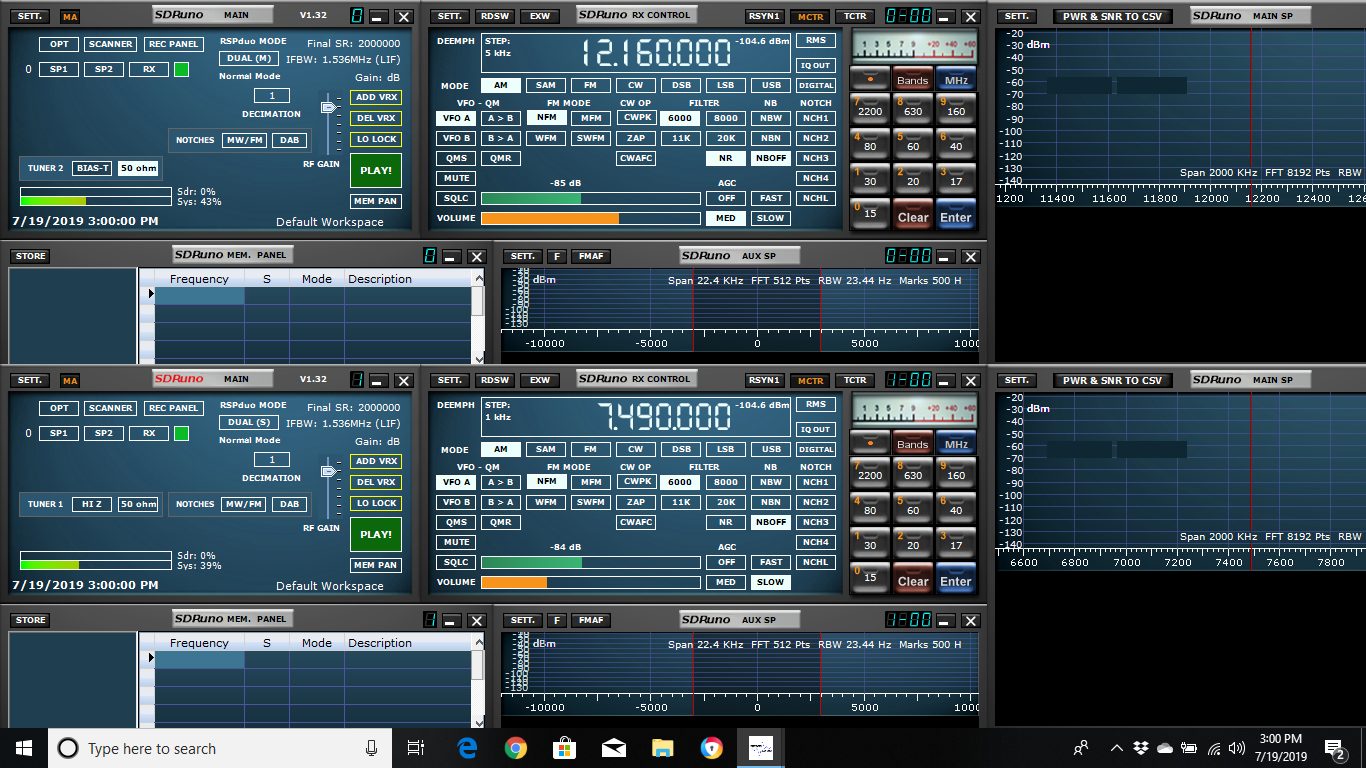 Also version 1.32 adds a feature called Diversity which lets you add both antennas and use them BOTH AT ONCE! 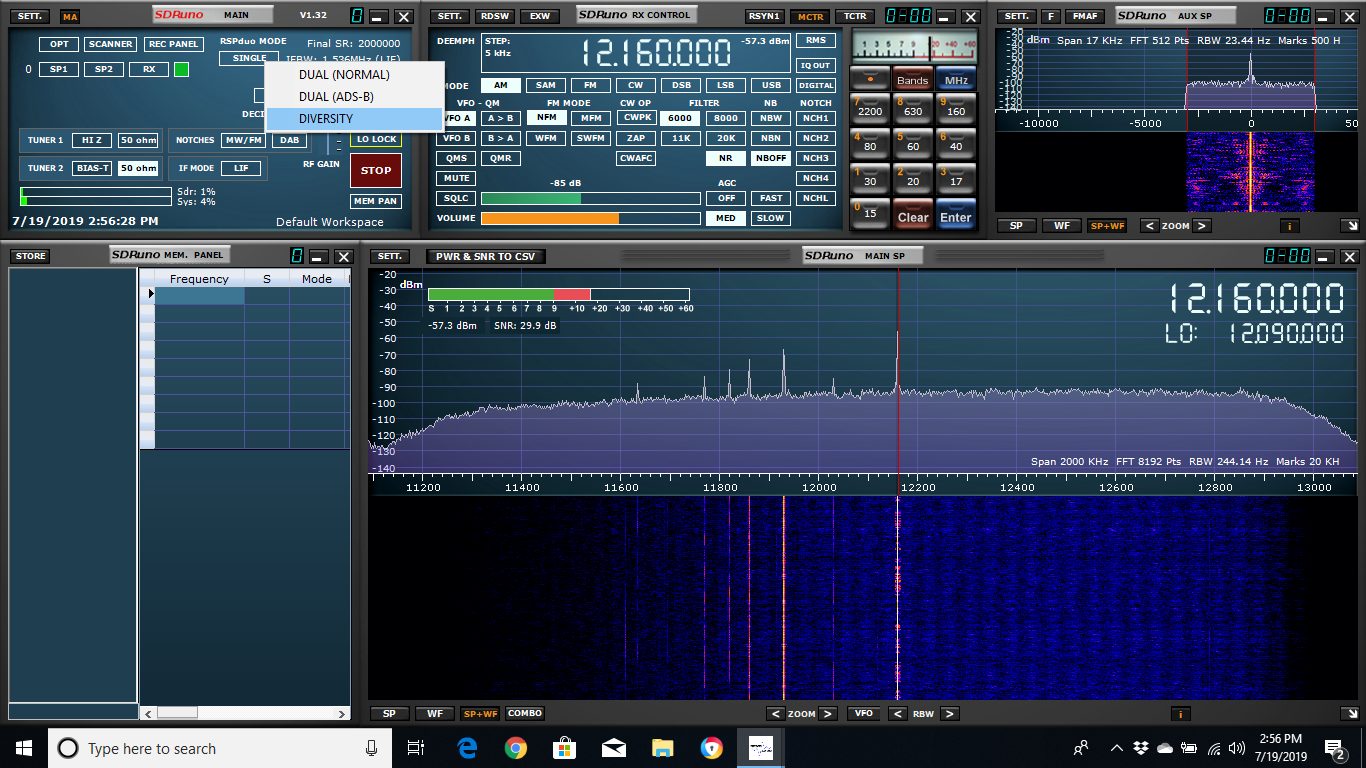 Holy Snikes.  Playing around with Diversity and two separate antennas has initially been a super positive experience.  There are times when one antenna clearly performs better than the other one or even better than both of them put together but for the most part using Diversity digs the signals out of the muck and is generally an improvement.   I like it, I like it a lot and I have a lot more experimenting to do with it.

Alas though SDRUno has one bug (on my computer).  I have perused all the forums, done Google searches and darned if I don’t think I’m the only guy with this problem.

I don’t have a mouse hooked up.  I scroll on the numbers on the keypad by swiping fast.  Invariably I’ll land on a frequency and then look up that frequency and the response from the short wave schedules is that nothing should be transmitting on that frequency.  I will then shut down SDRUno and reopen it and find that Uno was 10 kHz off, 100 kHz off, or a 1000 kHz off.  I cannot for the life of me recreate it (on purpose).  It is VERY FRUSTRATING.

Also it seems to happen (but not always) when Decimation is involved.  I suspect it could be my laptop, my intense super fast scrolling speed which makes Uno stutter and choke sometimes or it could just be a bug.   I wonder if a mouse or scroll wheel would help?  I dunno.

Anyway my experience with the latest SDRUno and RSPDuo has made me re-think my love/hate relationship with SDRPlay RSP devices.  I’m once again in love with them, specifically the RSPDuo.

Here’s a screencast video I made of the RSPDuo and SDRUno (on version 1.31 before Diversity)

But I am sorry to say that until I get a Linux SDRUno my traveling bag has an Airspy Mini and Spyverter in it.