On July 28th 1945 a B-24 named Lonesome Lady took of from Yontan airfield in Okinawa to attack ships at anchor at Kure Harbor. The aircraft was shot and subsequently crashed in a small field just outside of Iwakuni Japan. The village the actual crash occurred in is called Ikachi. A local resident, Mr. Keiichi Muranaka raised funds to place a monument at the site of the crash. I find it unique that in a small field in Japan a monument to a crashed B-24 exists. 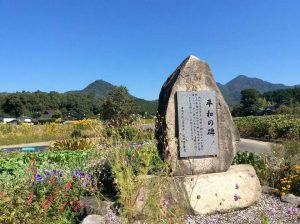 The crew members all bailed out of the aircraft and with the exception of the pilot and the tail gunner were all captured and taken to Hiroshima where they died in the Atomic Bombing. The pilot was taken to Tokyo and questioned and the tail gunner was taken to Kure. In 1999 a monument was placed in Hiroshima for American POW’s killed during the Atomic Bombing.

The Lonesome Lady Monument is located just off Road 70 near Ikachi Japan.

Below is a Google Earth KMZ file which can be downloaded which will get you exactly to the site which is darn near impossible to find without assistance. You can download the waypoint into your GPS or simply print off turn by turn directions in Google Maps.

So get off the base in Iwakuni and go out and find the Lonesome Lady Monument. It’s not something you’d expect to find in rural Japan.