Okay, the first Tropical Depression of 2020 is upon us a few weeks early and literally the only place in the US it is going to hit is HERE.  Eastern NC.  Shit.

Probably the best source for emergency weather, even better than your local news station is the National Weather Service (NWS) or NOAA Weather Radio station in your local area.   The frequencies they transmit on are:

To receive these broadcasts though you need a specialized radio that covers Very High Frequencies or VHF.  Your FM radio only goes to about 108 MHz.  A hardwire police scanner can probably be programmed, or a marine radio, or definitely an RTL-SDR software defined radio will work.

I have several radios I use for weather and one of my favorites is the CCrane 2E radio which is pretty expensive as far as radios go. I never really gave it much of a thought or a concern but the last major weather event in New Bern, NC was a fast moving storm replete with Tornados.  And for good measure it hit near midnight.

Turns out the storm wasn’t as bad as predicted but there were a couple tornados and a couple of systems producing tornados.  Every time there was movement or an event we’d get an NWS alert (loud tone) followed by voice.  Most of the alerts WERE FROM ADJACENT COUNTIES NOWHERE NEAR US.  Once most of the danger passed we were still getting CONSTANT alerts which were keeping us on edge and keeping us awake.

I’m not the first guy in history to realize that this is a problem of sorts so the weather geniuses invented something called Specific Area Message Encoding or SAME for short.  With SAME you can plug in a 6 digit code and receive alerts for only the country or coverage area that is relevant to you.  For example on this web page for NWS NOAA it shows that our 6 digit code is 037049.

If you go with just the big blue circle covered by our transmitter you see there are MANY other counties that that radio station services. 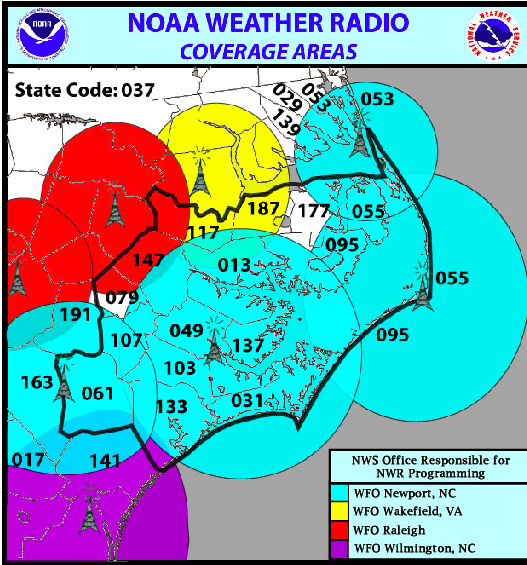 That’s a lot of unwanted and unneeded alerts coming in.

So basically when selecting a weather radio we want one that has SAME technology built in.  I bought a Midland WR120B/WR120EZ for $30 at Amazon.  Also they generally stock these in Walmart as well. 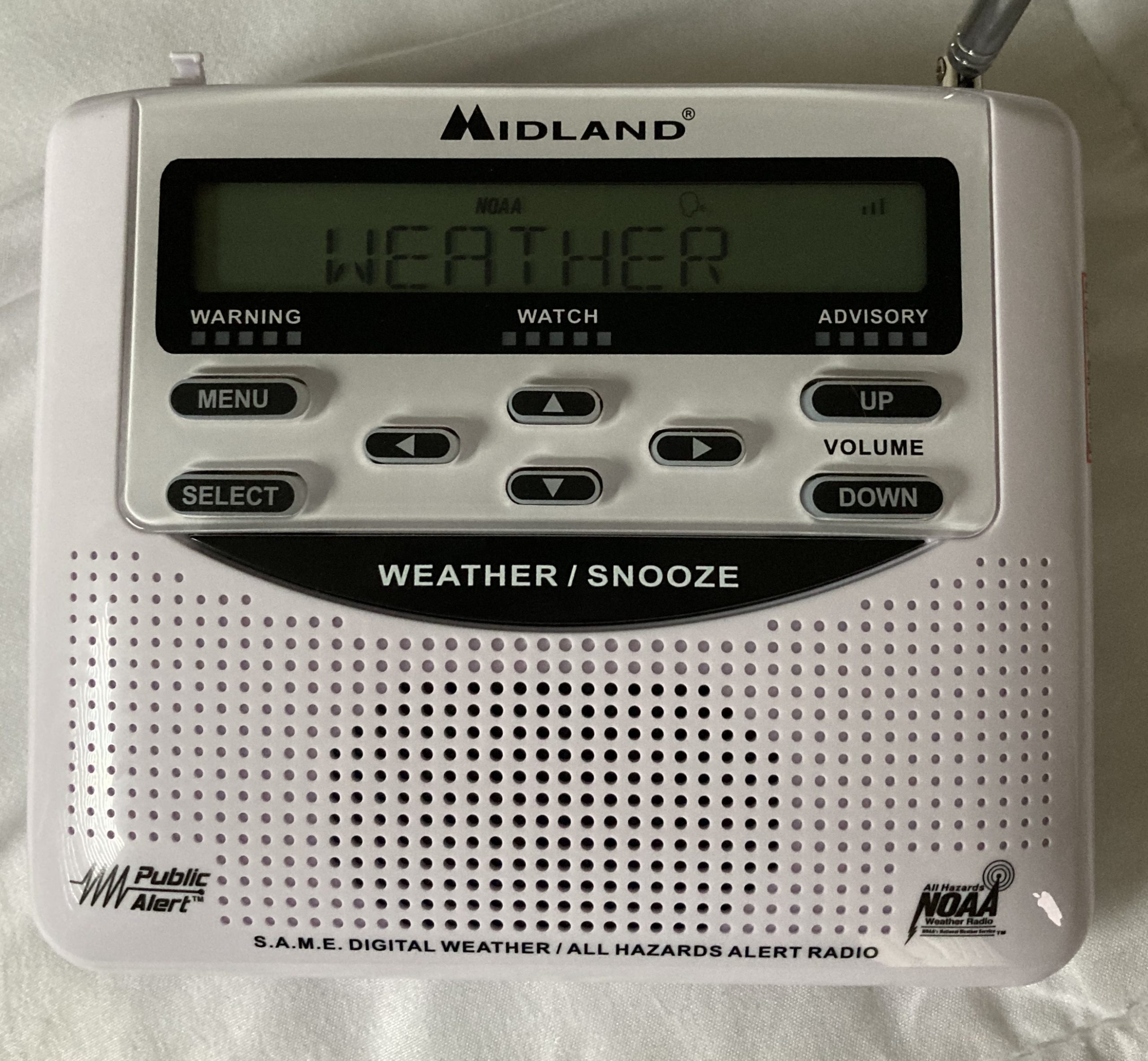 Nice little radio and VERY easy to program.  Essentially when you get it you put 3 AA batteries (not included) into it and it asks you immediately what Language you speak, what the time and date is, and what Country, State, and County you live in and what kind of alerts you want to receive.  You have to manually scroll through alphabetical lists which is a bit time consuming however you only have to do it once.  For example:

Another thing I think is cool about the radio is that you can connect an external antenna to it and it even has a cloning port on it.   That means you can set up one radio and easily configure a bunch of other ones exactly the same way without going through all the button pushing.   If you buy one or two this is basically unnecessary. 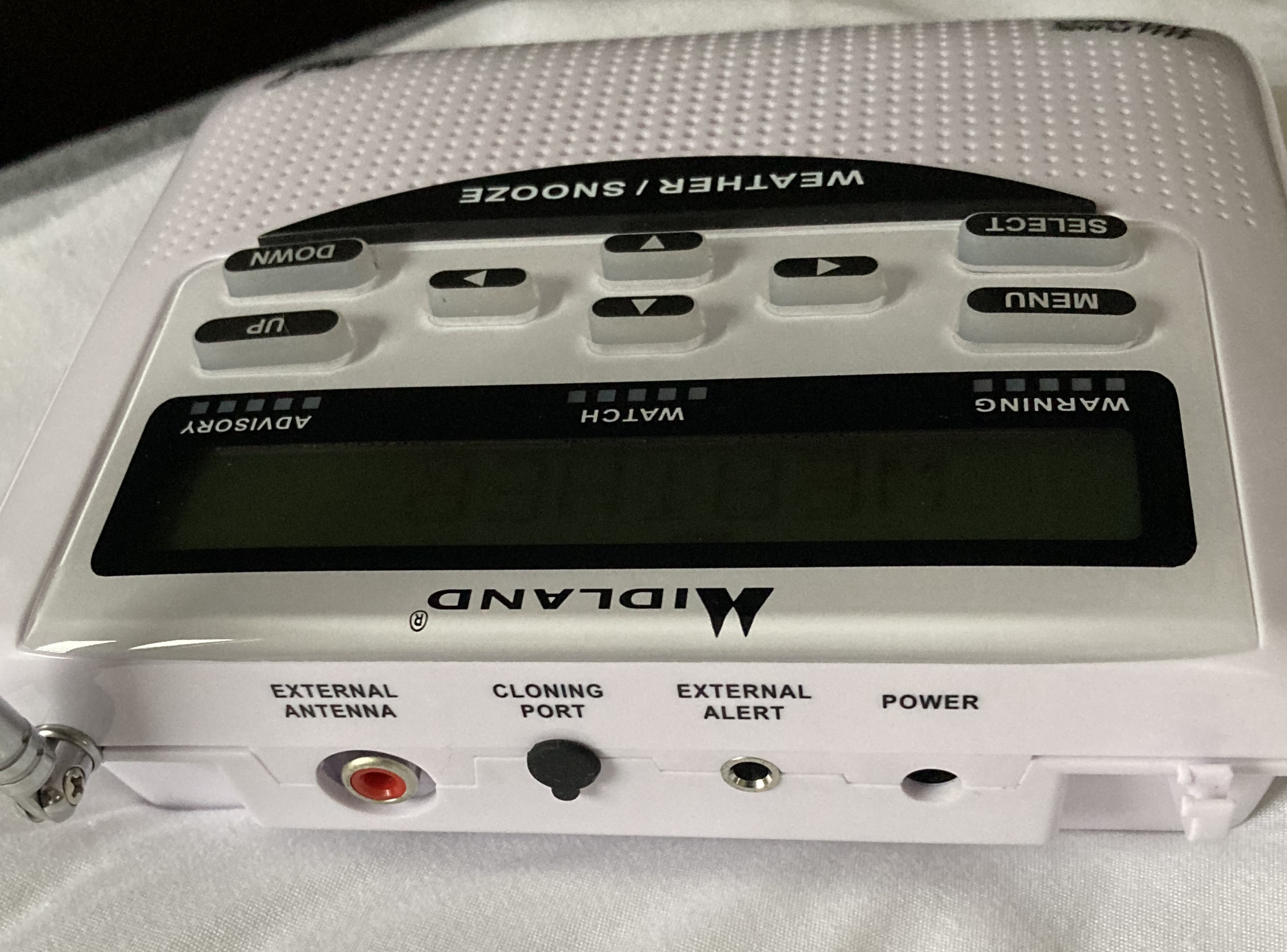 Here’s me doing a mini-review of this radio.

If you live in a heavy weather area like I do you need a weather radio.  Just get one.  And get one with SAME technology.

1 thought on “Weather Radios and Shit”