Once upon a time I weighed in at over 300 lbs.  How much over, I don’t know because your average scale doesn’t go over 300 lbs.  I went to the doctor and he told me I’d never make it to 40.  That may have been the one time in my life that someone said something and it actually made me take serious notice.  He wrote me a prescription for all kind of stuff.  I declined to fill the prescriptions and stated I knew what the problem was.  I was too damn fat.  So he tells me he wants to see me back in 45 days.

It’s at this point I decide to change things.  I was sent TAD to Pax River Maryland when I did my first treadmill exercise.  I didn’t even own any exercise equipment.  I ran the treadmill in boxers and black socks, no shoes. I must have been quite a sight.  I ran a mile and I wished it would have killed me.  By the end of the trip I was running my miles daily and kinda digging it.

So I get back to Japan (where I lived at the time) and I set out to run a mile outside.  Whoops.  Two different kinds of running. I barely made it a half mile.  Anyway I bought a cheap bike, some swim goggles and some running shoes.  I hammered every day best I could.   At 30 days the doctor calls me and says that he can’t in good faith let me go on 45 days and that if I die they’ll undoubtedly blame him and I’m taking whatever damn medicine he prescribes me.

I go in the office and I’m down like 35 lbs in a month.  Everything is borderline but my blood pressure and sugar levels are within norms.  He tells me he never thought I’d be the kind of guy to do it but he tells me to keep doing what I’m doing and lets me out the door without medicine.

Ultimately I lose around 100 lbs and exercise and counting calories is 2nd nature.  Fast forward 17 years and I’ve gained back 40 lbs especially after moving back to the US.  I’m still half the man I used to be but its time to drop the weight.  Hey, I write a Tech Blog so lets tackle this problem with Tech. 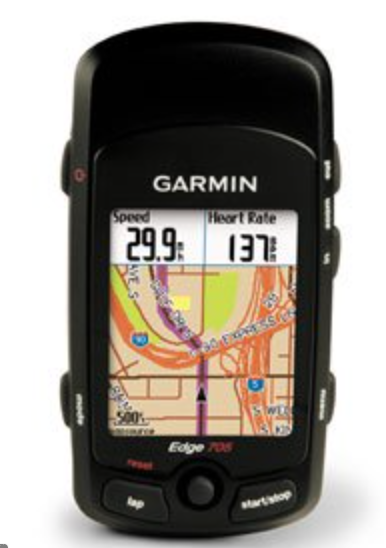 Ok this is kind of old but so am I. I bought this bike GPS back in the hammer time days and found it in the bottom of a drawer.  Current maps still load on it, GPS satellites haven’t changed and it tracks just about everything the new bike computers do, just its bulkier, with a lower screen resolution.

It syncs with Garmin Connect and my favorite fitness tracker, RubiTrack Pro. 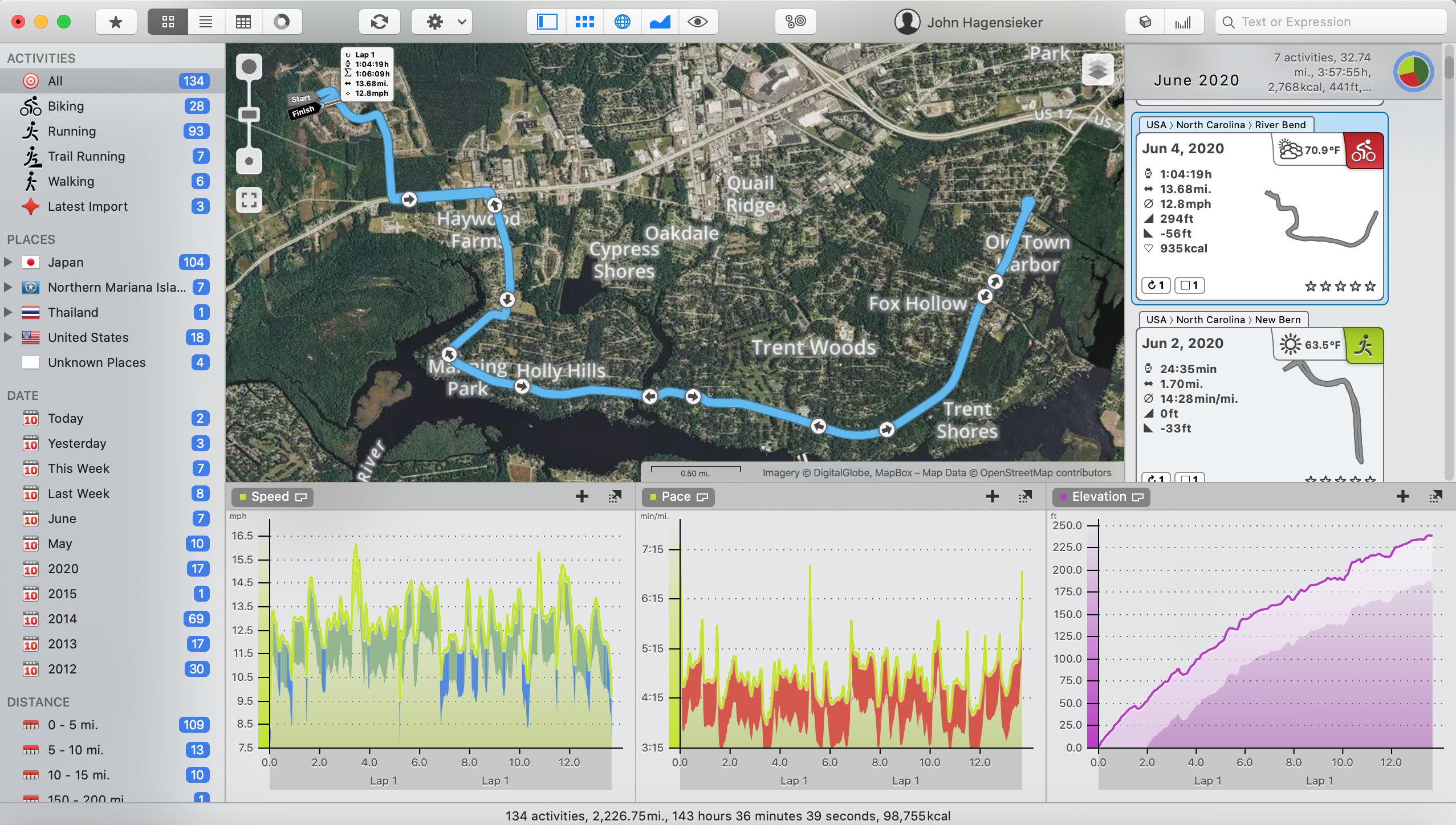 This is my favorite fitness app.  You can’t swing a dead cat on the internet and not hit a fitness app.  There are dozens of them but for some reason I like this one and it motivates me to keep making entries.  I want you to note though that there are 3 graphs at the bottom with Speed, Pace, and Elevation.  This data comes from the Garmin Edge 705.  Check out this screenshot from data obtained from my Apple Watch: 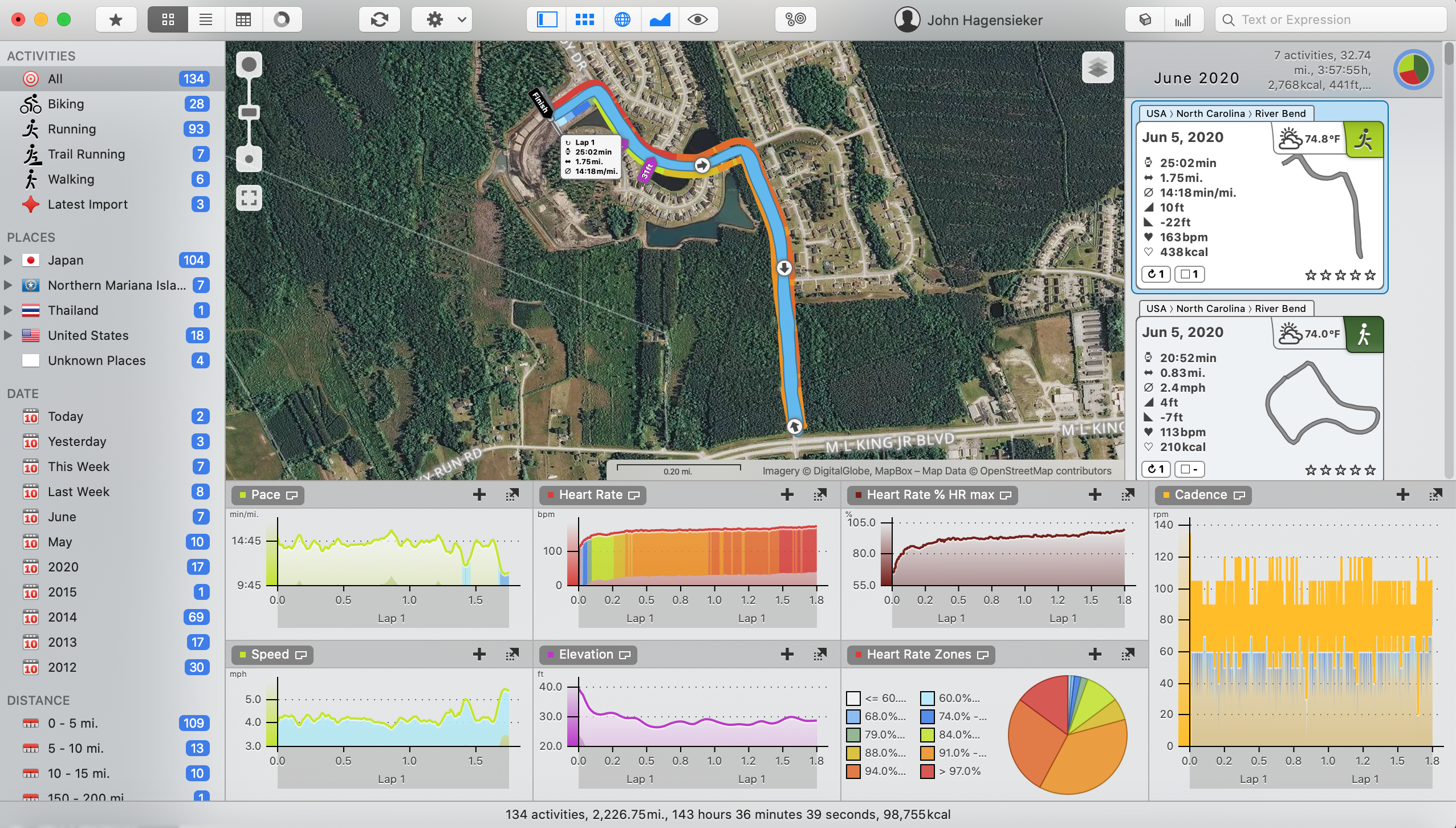 There are a check of a lot more graphs to include heart rate.  Much more conducive to FITNESS rather than exercise.  This of course leads me into: 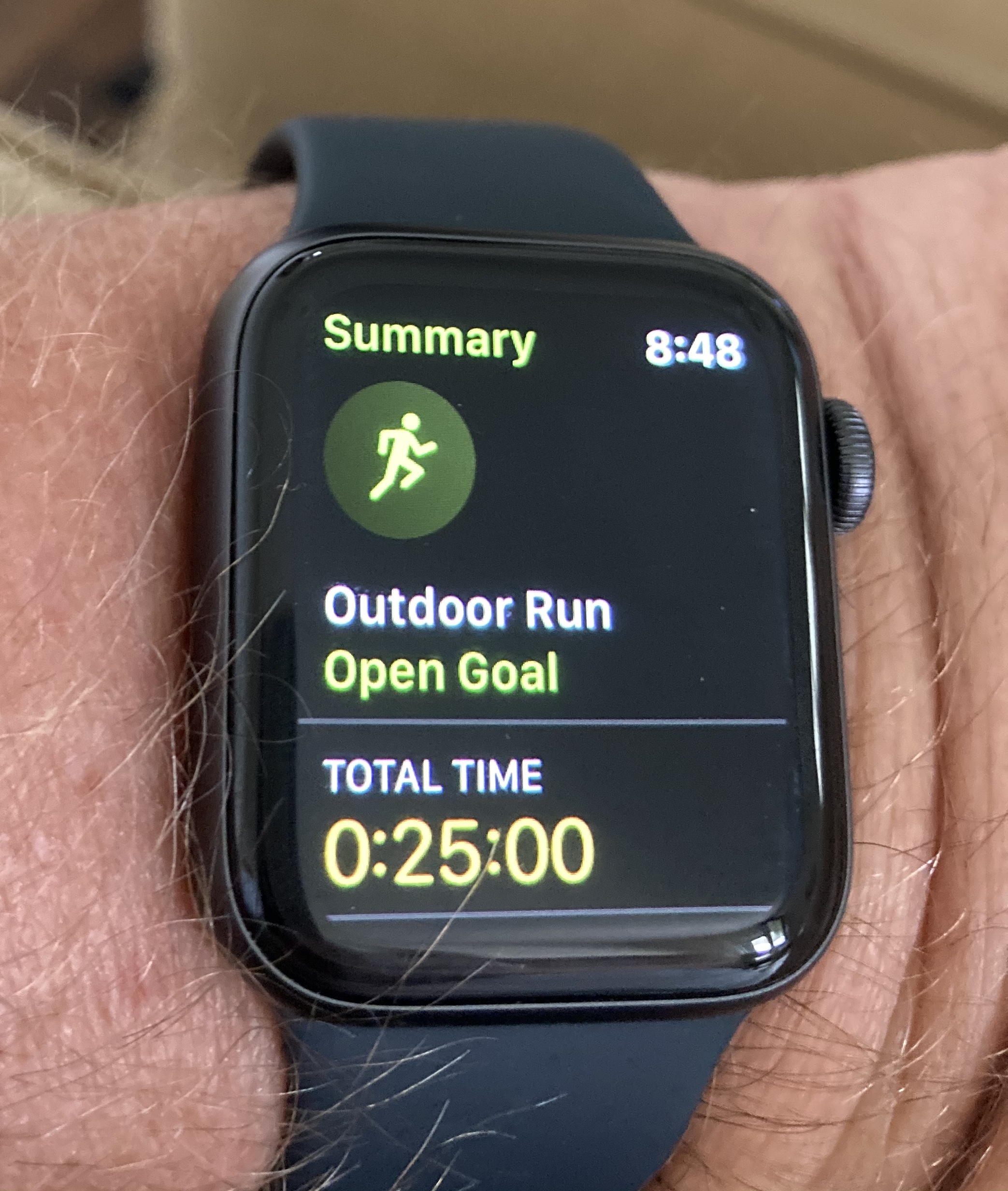 There are TONS of fitness trackers and everyone has a favorite.  I did a bunch of research before settling on the Apple Watch.  One big plus is the Apple Health and Workout apps sync PERFECTLY with RubiTrack Pro. 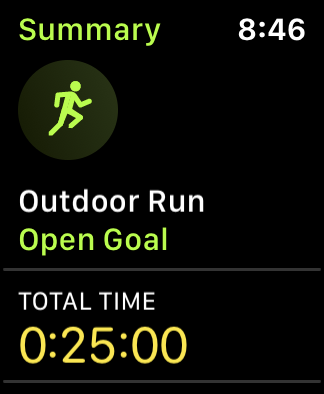 Not only does it say “John rode 13 miles in an hour at this speed” it adds all that fitness data as well.

For example my heart rate, while still never exceeding 100% is a bit higher than I wish it was.

As I lose some weight that will undoubtedly come down.

I could go on and on and on about the Apple Watch but here’s what I like about it the most.  It’s simple and it syncs ridiculously simple.  I have to USB connect my Garmin, open an app on the computer, then transfer that data to the phone app……..too complicated.  With the data from the Workout app on the phone It just syncs into RubiTrack on the phone.  And with all that fitness data.  Can’t beat it.

Exercise without diet is fruitless (pun intended).  The only way I can make myself accountable to maintaining a 2000 calorie a day diet is to count calories.  I’d almost rather drink Mexican tap water than count calories but I’ve found a program that makes it a cinch.

MyNetDiary has a great although initially confusing interface but once you get the hang of it it is a snap to keep track of calories and exercise calories burned. 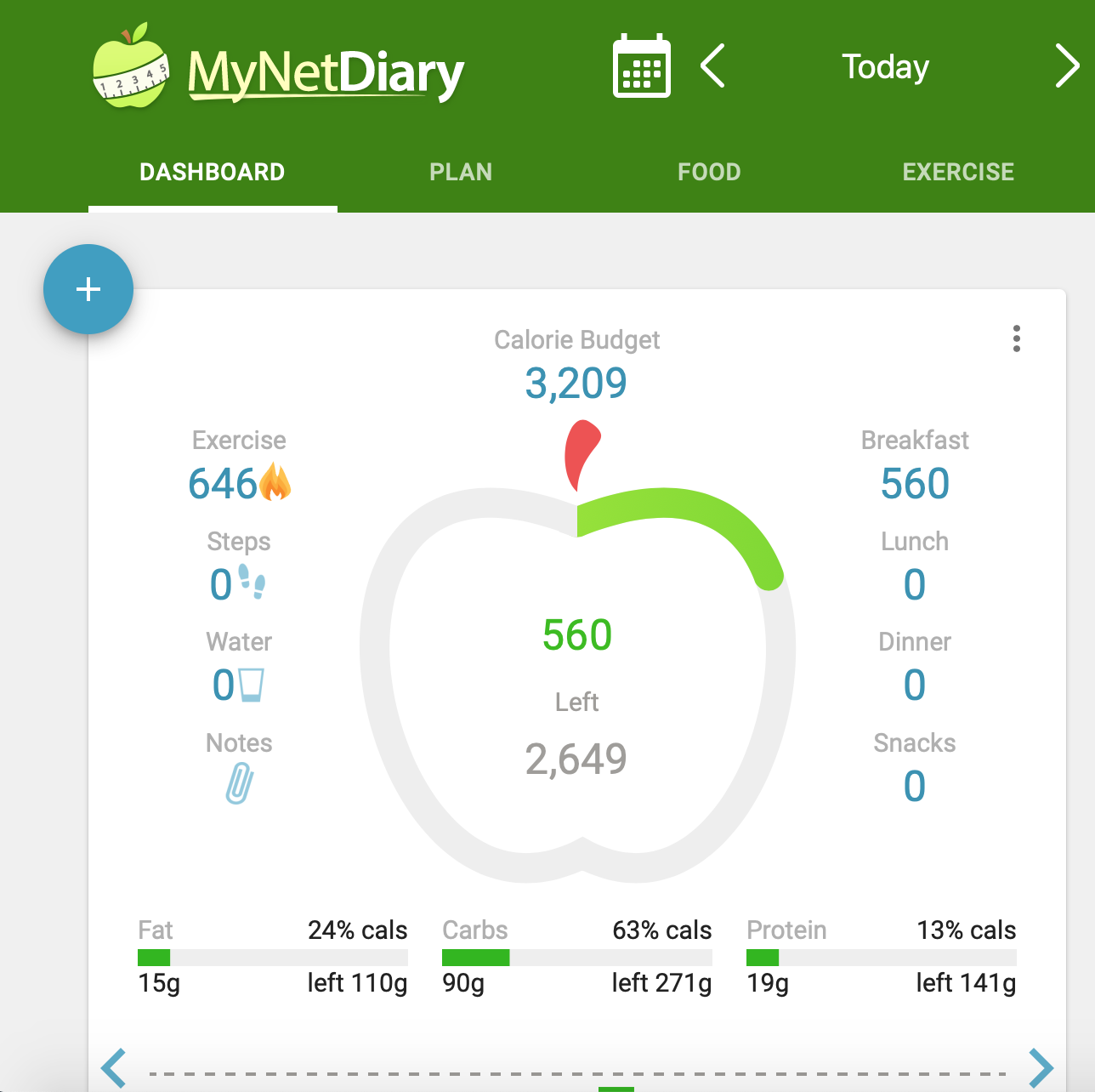 I get just over 2000 calories a day to eat but then tracking exercise allows you to eat more.  I’m holding at about 2000 to 2300 calories per day even though today says I can eat 3200 calories.  Also if you are like most people you may tend to eat the same snack every day or even the same meal everyday.  It’s super easy to copy repetitive foods.  It also has a bar code reader for scanning stuff in.  Yeah counting calories is a bore but again it’s the only way I can function on a diet.  I lost 100 lbs doing it so it works.  Losing weight is math.  Use more calories than you eat.

And I’m well on my way and my beloved Tech is going to take me there.   That and my bad assed Trek bicycle. 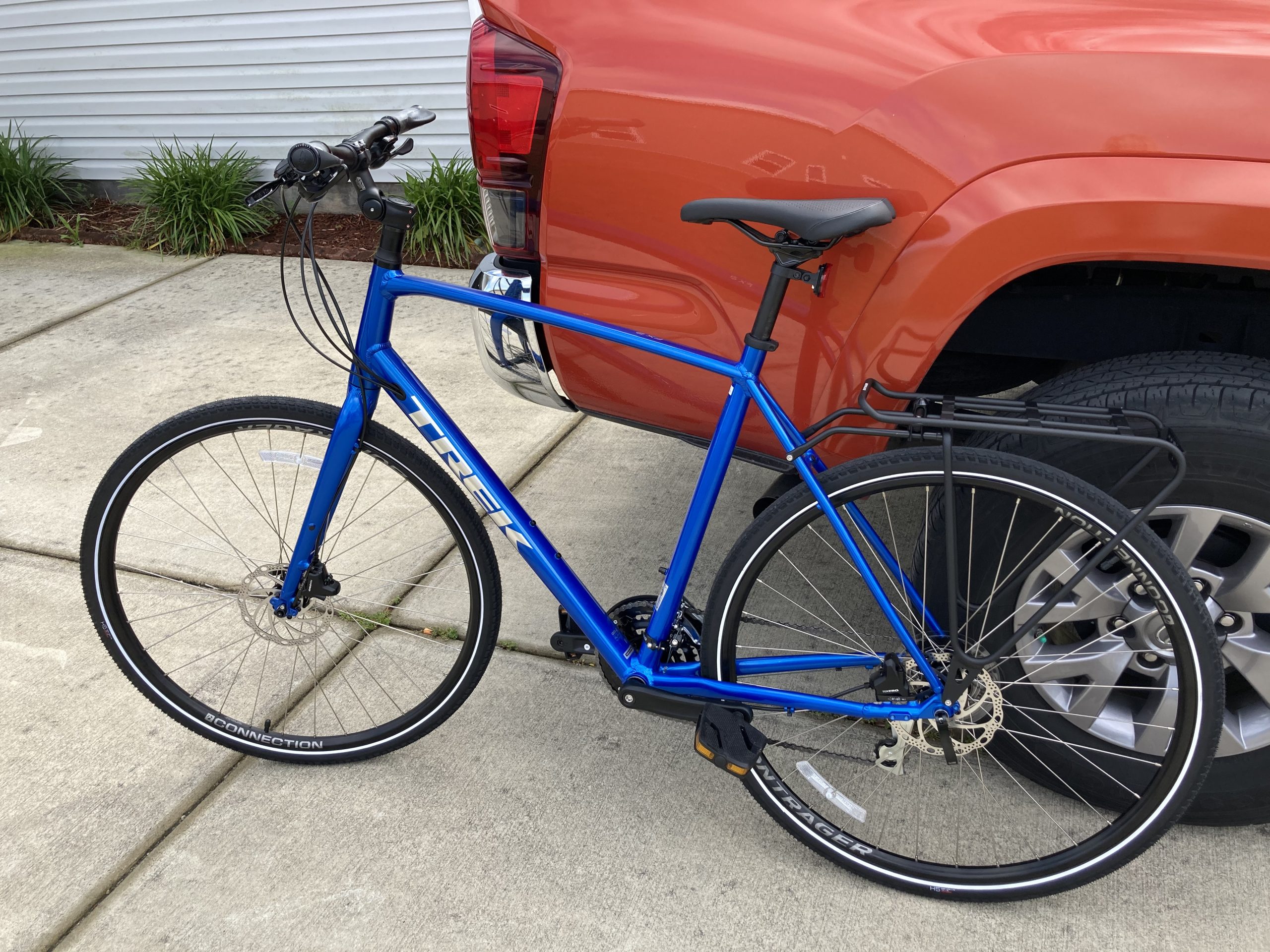