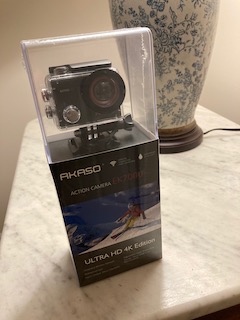 Let’s face it.  GoPro’s are expensive.  And your phone already has a pretty good video camera on it.  Somewhere in between those two items is a niche that an INEXPENSIVE action camera can fill.

I don’t know about you but I don’t want to mount my phone on my bike or carry it when I run or  when I’m otherwise pounding around.

I have a GoPro Hero 8 Black which is a $300 camera (now) and it doesn’t have a removable lens cover on it.  The thought of it catching a rock while I’m riding my bike does not appeal to me.  And yes, while they have protective cases, the minute you stuff your camera in there you lose the ability to change the battery quickly.  I take nearly 2 hour bike rides and it requires a battery change.

The battery change has to be done carefully with sweaty hands, and then it hit me………WHY NOT A CAMERA CHANGE?  Or just ride with a cheaper camera.  So I stumbled across an Akaso EK7000 Pro which I got for just over $60.  Wow!  That’s a bargain.  It claims to shoot in 4K but the camera sensor actually isn’t capable of that.  They use interpolation to get 4K.  Translation:  It ain’t 4K.

So here at John’s Tech Blog I am NOT going to sit and repeat the specs which you can by golly get on the Akaso web page.  As far as I’m concerned reviews that cover that stuff don’t do much for me but I am glad that others do them.  Don’t get me wrong there.  Just I won’t be one of those guys.

What I like to do is USE something and then tell you what I learned.  Not what is stamped on the side of the box or written in the manual.   And I’ll cut to the chase with this camera and tell you the bad stuff first before I get into any good stuff.

Now, what do I like about it?  It’s just over $60 freaking dollars!  I can tolerate only using it during the day and having over saturation (which can be corrected in software) if I even felt the need to do that. 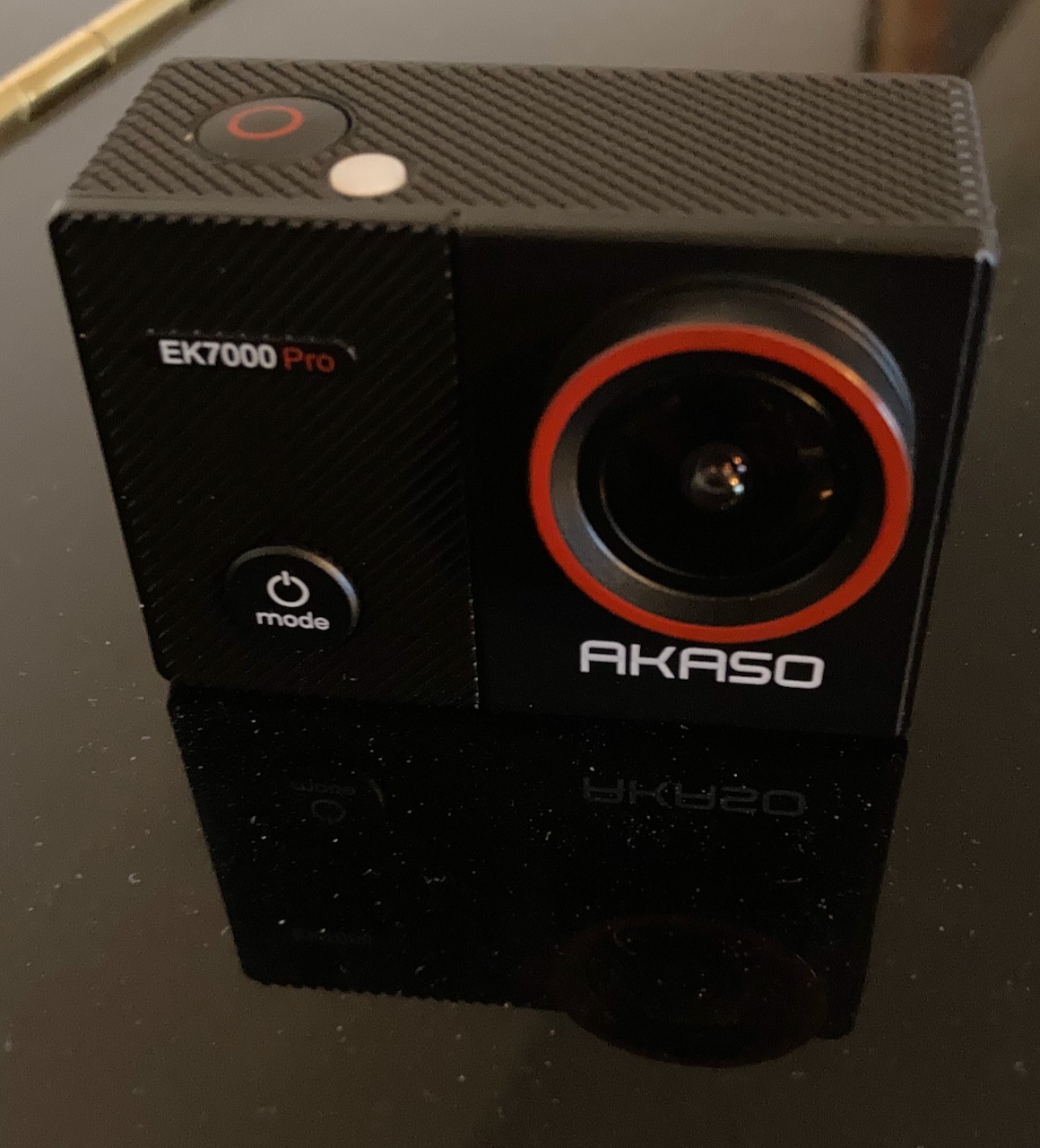 Here’s the back while it is on. 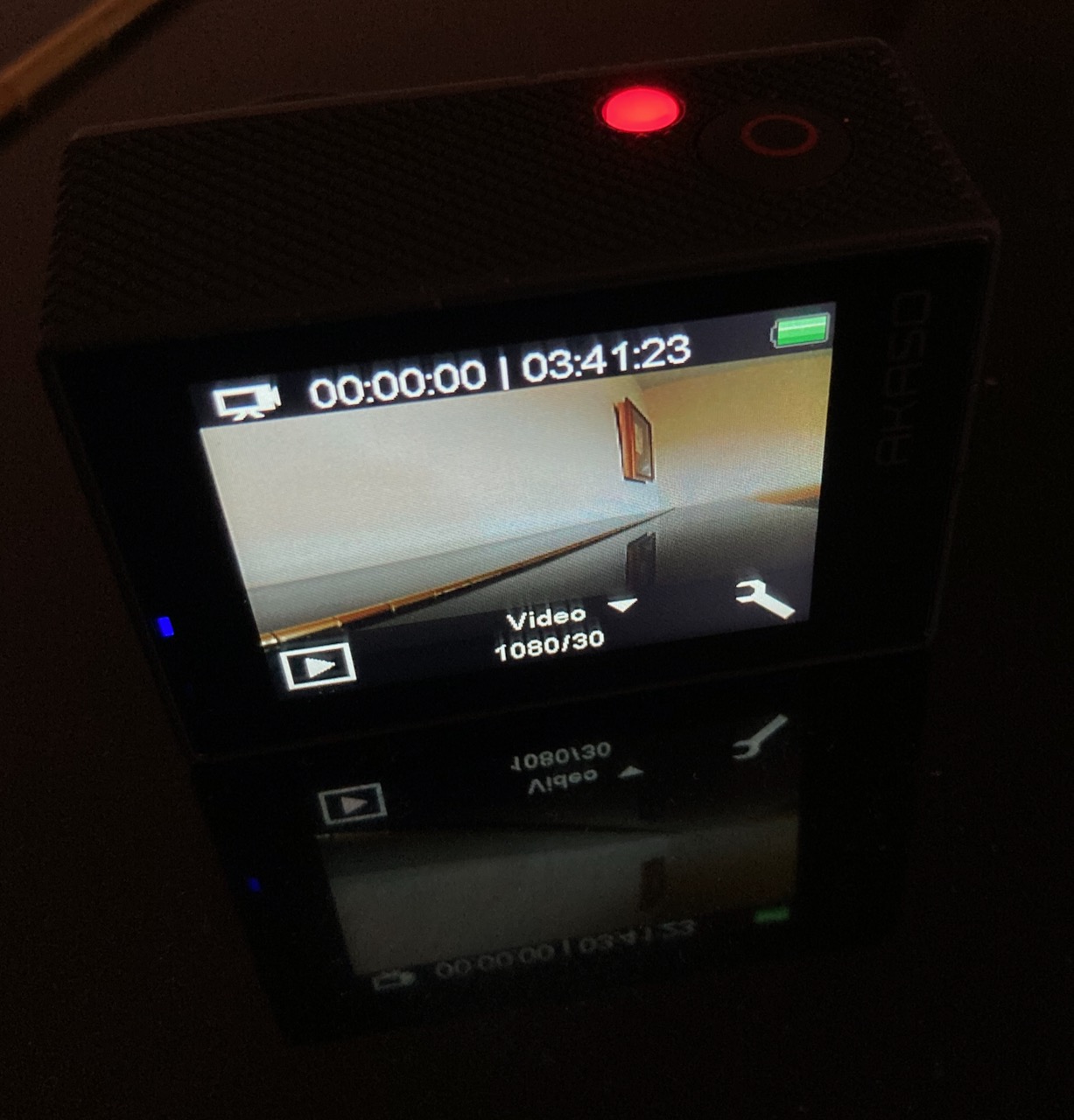 Truth is the video isn’t bad.  Is it as good as a GoPro Hero 8 Black? No, hell no.  Is the image stabilization as good as the Hero 8?  No, hell no again.  But if you’re a normal guy like me who just wants to document a bike ride where you might see a deer or have proof some asshole tried to run you over…………then by golly this is GOOD ENOUGH FOR MOST AVERAGE USERS.

Also if you take a bad spill you’ll cry a lot less if a $60 camera gets a scratch compared to a $300 camera.

In fact I dropped mine today about 2-3 feet on the floor while unplugging it, and it is still working just fine. It was in a skeleton shell that I use to attach to my bike. 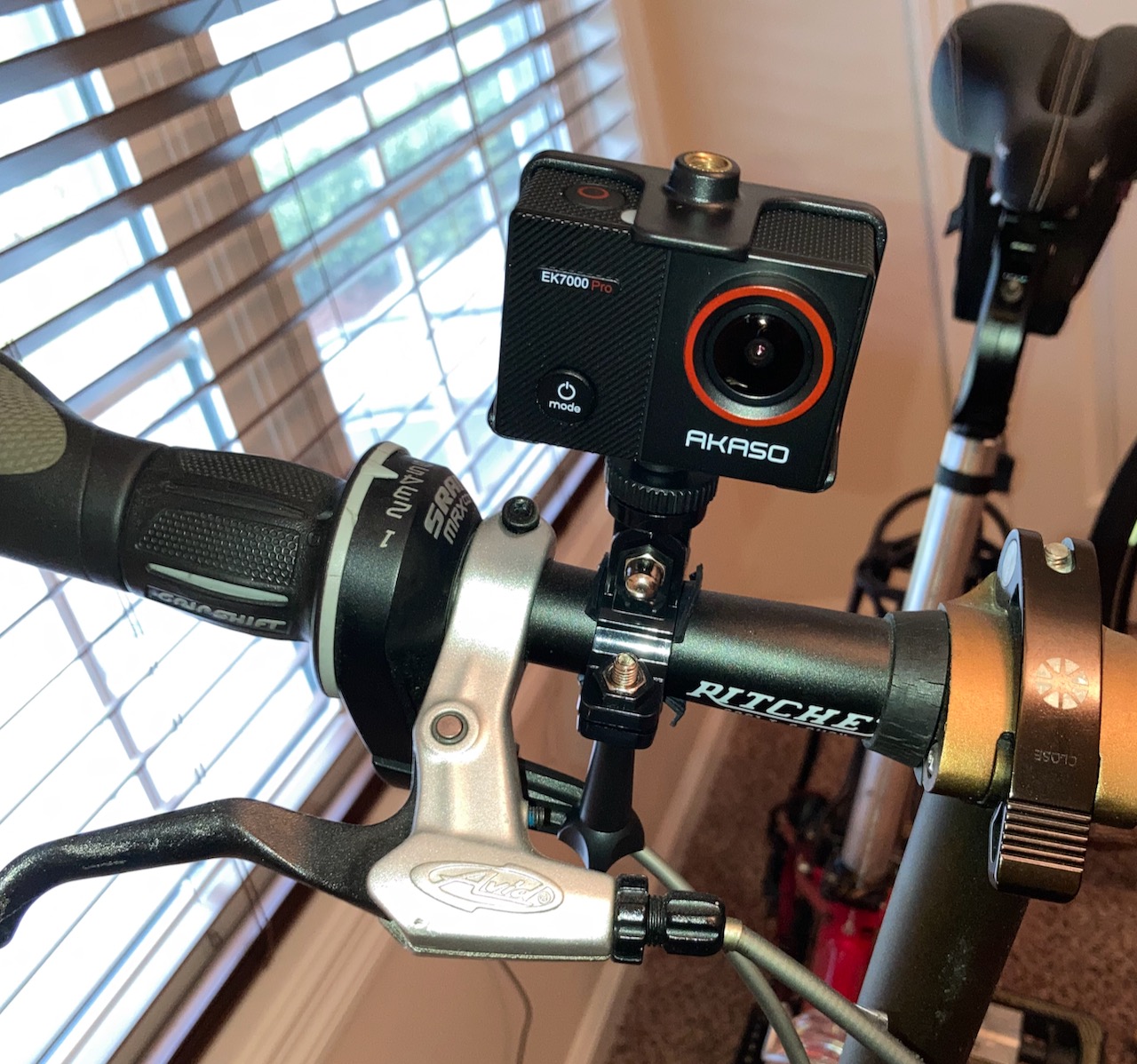 Which leads me to the next good thing:  There is a metric shit ton of mounts that come with the thing.  None of the mounts are top of the line, best in class, but there are a lot of them and the quality seems as such that if you are gentle with them, they’ll last just fine.

They also give you 2 batteries and a charger.  Another gigantic plus.  All of these cameras have terrible battery life and extra batteries are a must.  Like I said, my bike rides are nearly 2 hours long and my battery life is 1.5 hours TOPS.  On a good day.

Here’s some video I shot outside today.  Subject matter is weird as a neighbor sat out a washing machine that I snatched up and repaired to give to my daughter.  Video was shot at 1080p, 30 fps with image stabilization on.

So maybe you’ll see what I was talking about with the over saturation and maybe over sharpening.  Also it gives you a decent idea of the audio which I thought wasn’t half bad.  It wasn’t windy at all though.  You might notice that when I leaned over the hot tub to show the back of the washer the dynamic range went dark in the lower light conditions.

Here’s one more video comparing the Akaso EK7000 Pro against a Hero 7 Black in split screen.  Wow!  I never noticed how WAY over saturated the Akaso was until you hold it next to something that renders colors more accurately.  Text looks fuzzy, especially if you look at the smaller text.  It’s definitely harder to read in many instances.

And here is some raw footage from a bicycle mount.  I find the saturation again to be cartoonish, stabilization is awful.  This was shot in 4K 25fps.  The audio is completed unusable.  This camera is not suitable for action with audio that bad.   The video isn’t HORRIBLE, but it isn’t great either.

This is a niche camera in my opinion. Something you would use in repetitive, known great conditions.  Great light, no wind, no erratic movements.   The minute you stress this camera or try to push its envelope………things go bad.

The Akaso EK7000 is NOT a bad camera, and it isn’t a GREAT camera.  It lies roughly in the middle of that and again………..it’s a great bargain and more than adequate enough for most AVERAGE users.  As long as you understand the limitations……..it’s a good purchase.  But for the love of all that is good Akaso…………crank down that saturation.