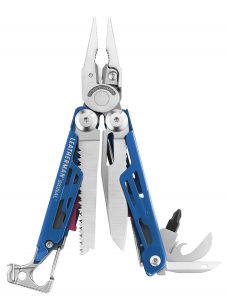 I love Swiss Army knives but I love me a good multi-tool as well.  I have several, from several manufacturers, and since I sometimes go camping I decided to pick up a Leatherman Signal in Cobalt Blue.  In most reviews you’ll see the reviewer discuss in almost identical detail the things that are linked in the manufacturers product page.

I’ll just tell you what I like, or don’t like about it.  First of all I have a Leatherman Surge and a Wave Plus.  I’ve had this Signal for a long time and just never got around to reviewing it.

The Surge is awesome, especially with the accessory tools such as the Rachet Driver and by and large the Wave Plus is my favorite of the Leatherman offerings.  I don’t even need to elaborate.  Just get one and you’ll likely agree.

The Signal is a different beast entirely. And I’m not sure if that’s good or bad.   And in fact I’ll cut right to the chase.  The redeeming value this knife possesses for hiking and camping is the Ferrocerium Rod (fire starter) and the hammer for pounding in some tent stakes or likewise.  And even then, the hammer has a small face on it and not a great grip for hammering.

Again, cutting straight to the chase here…………..I’d rather be toting a Wave Plus and some other separate ferro rod for starting fires.

But John, the Signal also has a saw!  A good one.  And I agree…….if you can get it out of the body of the multi-tool, that is.  It has a tiny fingernail nick in an awkward place and the Carabiner is totally in the way. 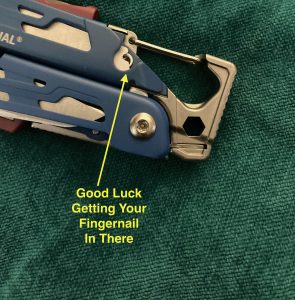 Practice makes perfect but how many times do you actually use the saw to get proficient at extracting it.

Ok.  It has a saw, and you can get it out and it locks into place.  That’s all good.  It’s just a little frustrating for me to extract. Ditto to the Sharpener. 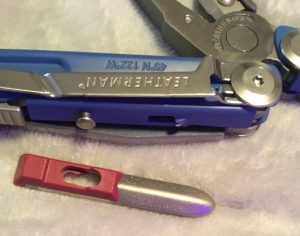 And double ditto to the whistle / ferro rod.  Tiny little removable tools in the woods is a recipe for losing them.  At least they made them red.  Orange or yellow might have been better though. 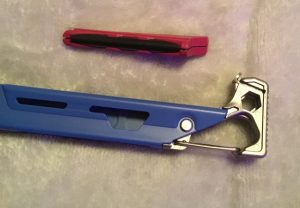 UPDATE:  A day after I wrote this I was on the Hardware Accessories page at Leatherman and they do indeed make different color sharpeners and whistles/ferro rods to include yellow or orange.  Of course buying both will cost you approximately another $20.  But I just wanted to clarify that they did think of that.  I would much rather go in the woods with more brightly colored tiny, removable accessories.  I went ahead and “upgraded” my Signal and this is what it looks like now! 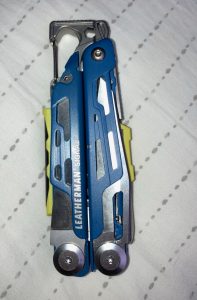 Back to usability………It’s not a very intuitive knife, even for someone with lots of multi-tool experience.   And it is missing scissors which is kind of a shame.  I find scissors on a multi-tool to be a great inclusion.

Regarding the color I figured something with some color would be easier to find if dropped in the woods, and while that is true maybe I should have gotten the yellow, or the bright stainless steel.   The blue has that “don’t scratch me, man” look to it.  It is an attractive knife.  At least to my eyes.

I’m not much of a knit picker and I have to say it is a solid tool SPECIFICALLY DESIGNED FOR AN OUTDOORS EXPERIENCE.  A real outdoors experience.  Not you walking down the flat, city maintained path where a railroad track used to be.  This is for someone who goes out for several days and lives off the land to some extent.

And for the third time I’ll add that the Wave Plus is my favorite.  If you are in the woods you’ll likely have a backpack.  Throw a Wave Plus in the backpack with a ferro rod or matches (or both) and get you a small hammer.   I swear that if I were pounding a tent stake in I’d rather have a big rock than the small face on that hammer.

I will not say that the Signal is a bad tool.  It’s a great tool.  But the choice of an Every Day Carry (EDC) tool is very personal.  The Signal doesn’t check all my boxes.  And while I do camp, and hike I’m not a survivalist guy who goes out there and stays.

Great tool, but made for a specific mission.  Not the best choice for day to day EDC.  However it could be, if all you use are the pliers, screwdriver, and bottle opener.  I’ll go out on a limb and say that most people carry a Leatherman for those pliers and this one does have replaceable wire cutters.

If your multi-tool is to make friends, family, and the girls swoon when you fix something on the fly when no one else has any tools handy ON A DAY TO DAY BASIS …………..Get the Wave Plus.  If making the girls swoon involves making a fire while hunting Sasquatch……….Get the Signal.