I’ve been on a Raspberry Pi project tear lately.  Somehow or another I stumbled into BirdNet-Pi and the best way I can describe it, is that it is like Shazam for bird songs.   It records the call and frequency and plots it on a spectrograph and identifies the bird.

About a year ago I married my long time girlfriend and we bought a new home just outside of town.  We are on a 1 1/2 acre heavily wooded plot that also has a creek running along one edge.  So the birds love it here.  And my wife loves birds and keeps the feeders clean and full.  So I really did this for her but this project has got me super excited about all the different species of birds around here and their distinct calls.

It’s easy as heck to build.  You need:

NOTE ON MICROPHONE:  Because the Rode mic I linked above costs $50 and it is a directional microphone I did some research and found an omni-directional mic that costs $20 less.   It is a Lavalier Clip On mic.   I’ve had it up several hours and my bird call detection is WAY up.

That’s it.  Install Pi Os 64 bit Lite with Raspberry Pi Imager.  Be sure to hit Command +Shift + X (Mac) (probably Control + Shift + X on windows) before you write the SD card. This allows you to  set up wifi and change the hostname  and change the timezone and set up SSH if you want. 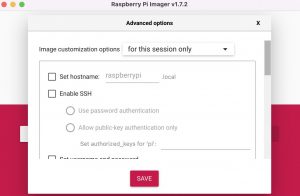 Now you either need to ssh into your Pi or have a monitor, keyboard, and mouse installed.

Before you start make sure your pi is up to date.

Once that is done reboot your pi.  To install BirdNet-Pi is a piece of cake.  Just run one command  in the terminal.

This will take a bit. Maybe 15 minutes. Once it is complete navigate into a browser and go to:

It will open a page that looks like this. 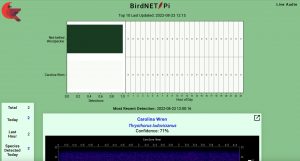 Now set that sucker outside and let it start doing its thing. 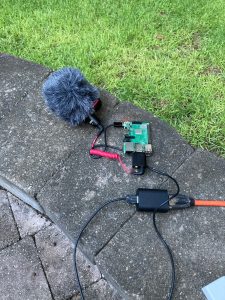 I won’t get into the nuts and bolts of it too much but once you detect a bird it allows you to click on a link to see a pic of the bird (on a wiki page), not your actual bird.  It also records the calls and you can play back those recordings in the browser but one thing I did notice that is there is no way to download the mp3 file from the browser.

What you need to do is get an SFTP client like Cyberduck or FileZilla and then you can SFTP into your pi and download the MP3.  This is really the only weak point I see in the program.

Anyway, I need to find a way to make this weatherproof yet still have the mic exposed.   This could be tricky.  For now I’ll just set the Pi outside.

In just over 24 hours I have detected 18 species of birds and over 620 bird calls.  Amazing.  Simply amazing.

As far as Pi projects go, this is EASY.  Install the OS, Install BirdNet-Pi, and set it outside in range of your wifi (or ethernet).

I find this project extremely engaging and interesting and I’ve never been a Nature Boy………..WHOOOOOOOO.

I’ve had this up a couple of weeks now and I am stunned and amazed at how wonderful this is.  I built this for my wife but it has been a great experience for me as well.   In two weeks we have had over 40 species of birds detected and I’m beginning to learn to detect some species visually and audibly.   I’ve also began to photograph the little flying devils as well when they come to get a snack at the bird feeder.

I’ve had a couple of issues.

Still, this is right up there in Pi projects.  You can’t go wrong.