I have an HDHomeRun HDHR5-4US which i reviewed, and I generally love it.  However, about a year ago I moved to a “new” house and the previous owner left all the TV’s that were wall mounted.  All were fairly old TV’s and none of them smart.  I hooked Roku’s to all of them.

That is when the trouble began.   I installed an attic antenna and got good signal strength, and symbol quality on the channels that were important to me.  I could watch those channels WITH NO ISSUES on my phone or on my laptop.  The old Roku connected TV’s were another issue altogether.   The channels would pixelate horribly and the stream would fail frequently.  I have super fast internet and the TV’s are all close to the wifi router as well with great signal.

I really believe it is a transcoding issue with Roku.  Or rather the fact that Roku does not transcode.   Again, it works on my computer, phone, and Firestick devices work fine.

So, to mitigate the problem I bought a new TV for the Bedroom.  An LG 43UQ7590PUB from BestBuy.  Before I bought it I confirmed the LG WebOS had an HDHomeRun app.  However, when I got home there was no app in the LG store. Previous WebOS versions had it available.  I contacted LG Support and they told me to hook up a Roku!

The LG TV though did detect the HDHomeRun as a mediaplayer and you can manually select channels.  What you don’t get though is a polished hunk of software with guide.  I need that guide.

I run a badass server on my network and use Unraid as the OS.  I also have Plex Media Server installed.  Adding the Plex app to my LG TV allows me to select “LIVE TV” from the Plex Menu which gives me full control of transcoding and a fancy TV guide.  Using the Live TV is a paid feature of PlexPass which I bought ages ago. 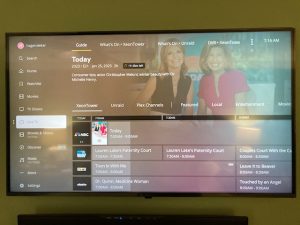 Issues with the HDHomeRun app on the Roku platform were overcome simply by using another interface such as PlexMediaServer.  I also run Emby, however,  you have to pay an annual fee to use Schedules Direct to get a local TV guide.

As the old saying goes, “There is more than one way to skin a cat”.

Many TV markets offer local channels in their cable package or via apps such as Sling.  No such joy here in tiny New Bern, NC.  The best way for me to get broadcast, over the air TV is with an antenna. It’s also free as well.

Adding a hardware TV tuner could be problematic with older TV’s or certain devices and in fact I have sound issues with HDHomeRun on Roku on the other old (Samsung) TV in the house.

As far as Roku goes, it is slowly sliding down Johns Tech Blog “Piece Of Shit” list.  i want to like it, and I used to like it, but not anymore.  Most people get a Roku or other device and just stream Netflix, Amazon, Sling or Hulu.  They aren’t goofy like me and have servers, and TV Tuners hanging off of their network.  They don’t push the limits of their entertainment centers.

I do.  Roku just doesn’t have enough user control over hardware and it just doesn’t cut the mustard in a super geek environment.